This is the shocking moment a Domino’s pizza delivery driver rubs a tub of ice cream on his crotch before handing it over to a customer.

The employee was caught on the customer’s doorbell Ring app rubbing the tub of Ben and Jerry’s birthday cake flavour on his trousers as he waited on the doorstep.

Jonathan Terry, 31, from Great Missenden, Bucks, said he’d already started eating the dessert on Sunday night when his girlfriend called to warn him to stop after the footage was sent to her mobile phone.

Domino’s said they were ‘extremely disappointed’ to see the unnamed driver’s ‘unacceptable’ behaviour.

Mr Terry, a wedding photographer, told MailOnline: ‘I was at home with a friend because my girlfriend was out and we decided to order some food. 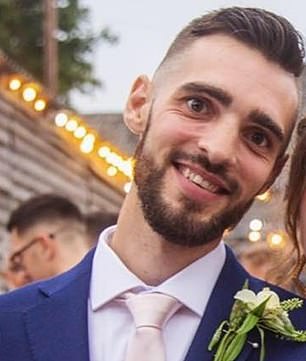 ‘About half an hour after it arrived my girlfriend called and said: ‘Don’t, whatever you do, eat the ice cream.’

‘When I told her that we’d already opened it, she said, “It’s probably fine as the ice cream is in a sealed tub but put down the spoon and look at the doorbell footage.’

‘When I saw what the driver had done I just couldn’t believe it. He may have had an itch on his crotch but but to scratch it with something I’d paid for is disgusting.

‘It’s unprofessional and unhygienic,’ he added.

Mr Terry said he was given a Ring doorbell, which is equipped with a camera that sends footage of callers straight to his phone, two weeks ago for a birthday present.

He said: ‘I’ve eaten so many Domino’s pizzas over the years but I dread now to think what the drivers have been doing to them.

‘It really has put me off ordering from there again. Even if the company was to offer me vouchers, I’m not sure now that I’d want to take them.’ 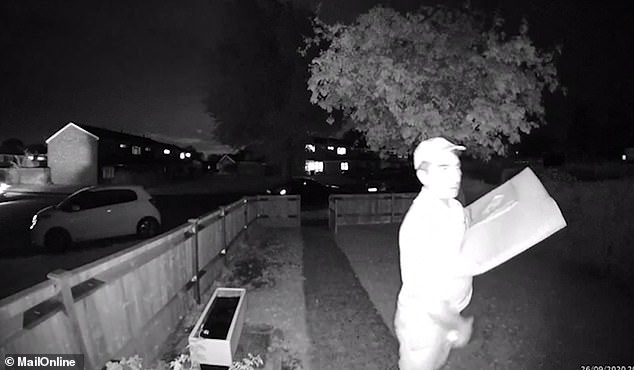 Domino’s spokeswoman Rachel Townsend  said: ‘We expect high standards of behaviour at all times and clearly this individual has breached the trust our customers rightly expect from Domino’s.

‘We are conducting a formal investigation with this team member as a top priority. We have apologised sincerely to our customer and we are talking with him to understand what we can do to put this right.’