Co-hosts of The View got together on Tuesday to pay tribute to the late Barbara Walters, who created the famous daytime talk show in 1997.

While sitting with Whoopi Goldberg, Lisa Ling, and Joy Behar, Sherri Shepherd, 55, shared a funny anecdote of Walters – who passed on Friday at the age of 93.

Shepherd revealed that the renowned journalist once told her she should ‘be a lesbian’ and avoid marrying men who ‘take her money’ during her bridal shower, which Walters threw for her.

Brutally honest: Sherri Shepherd, 55, shared a funny anecdote of her former The View co-host Barbara Walters, who passed on Friday at the age of 93; Pictured 2009

‘She said, “You always get with these men who take your money! All the time! Stop getting married to men that take your money. You need to be a lesbian,”‘ Shepherd – who joined The View in 2007 and left in 2014 – remembered.

Walters then reportedly added, ‘But with your luck, they’d take your money, too.’ The ladies laughed it up and agreed that Walters could be brutally honest like that.

Sherri was also seen outside The View studio in New York City on Tuesday rocking an all-pink ensemble. 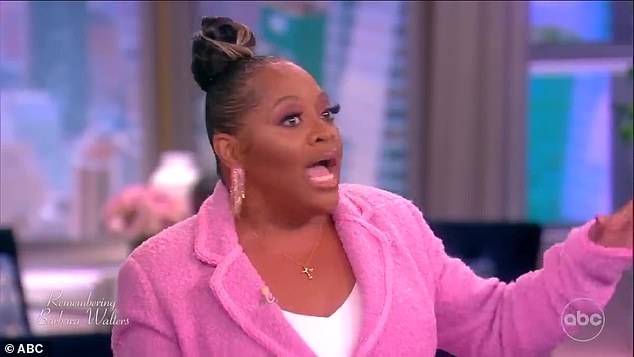 Funny: Shepherd revealed that the journalist once told her she should ‘be a lesbian’ and avoid marrying men who ‘take her money’ during her own bridal shower, which Walters threw for her 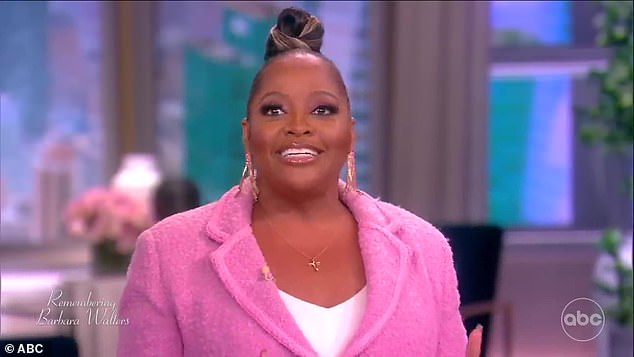 Looking out: ‘You always get with these men who take your money! All the time! Stop getting married to men that take your money. You need to be a lesbian,’ Walters reportedly said, before adding, ‘But with your luck, they’d take your money, too’

Her first divorce ended with a nasty custody battle over the couple’s son Jeffrey Jr, whom they welcomed in April 2005.

Her second divorce was also a contentious one, and spanned over several years, as Lamar fought her for child support for their son, Lamar Jr., who was born using Lamar’s sperm and a donor egg.

Sherri is not genetically connected to Lamar Jr. – who was born via surrogate after the couple split – and fought to prevent her name from being printed on the birth certificate, however a court eventually decided that she is legally responsible for the child. 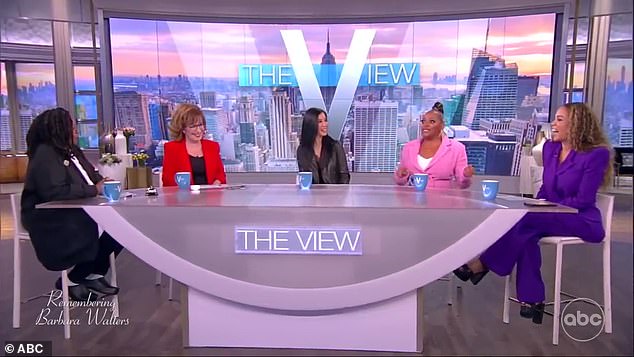 Remembering: Sherri was joined by former co-hosts including Whoopi Goldberg, Lisa Ling, and Joy Behar as they remembered Walters, who created the daytime talk show in 1997 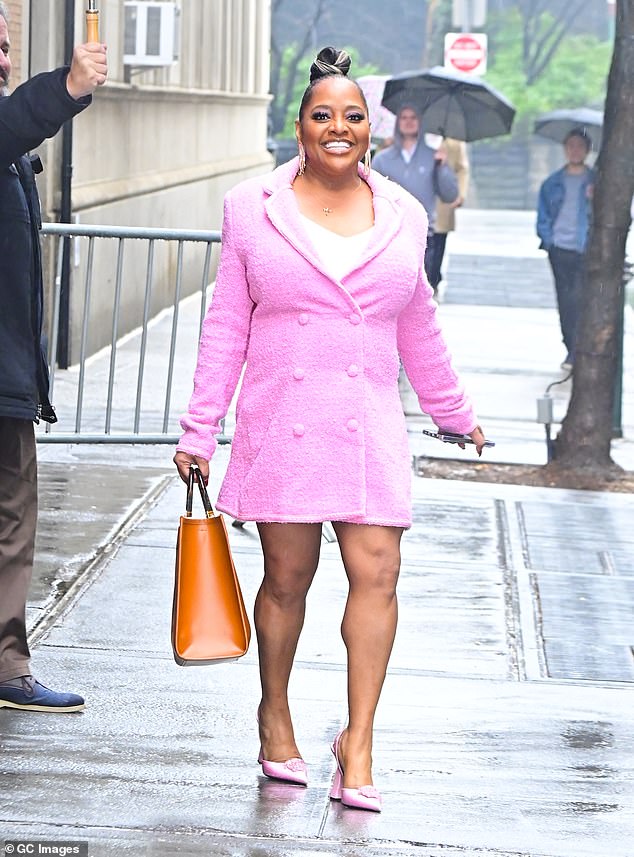 Pretty in pink: Sherri was seen outside The View studio in New York City on Tuesday rocking an all-pink ensemble

Elsewhere on the show Sherri also remembered how she always felt ‘protective’ over Walters, and that the feeling was mutual.

The View premiered in August 1997, and more than 20 women have had permanent roles as cohosts on the morning talk show.

The show featured interviews with a wide variety of guests and discussed a range of topics from news and politics to entertainment. 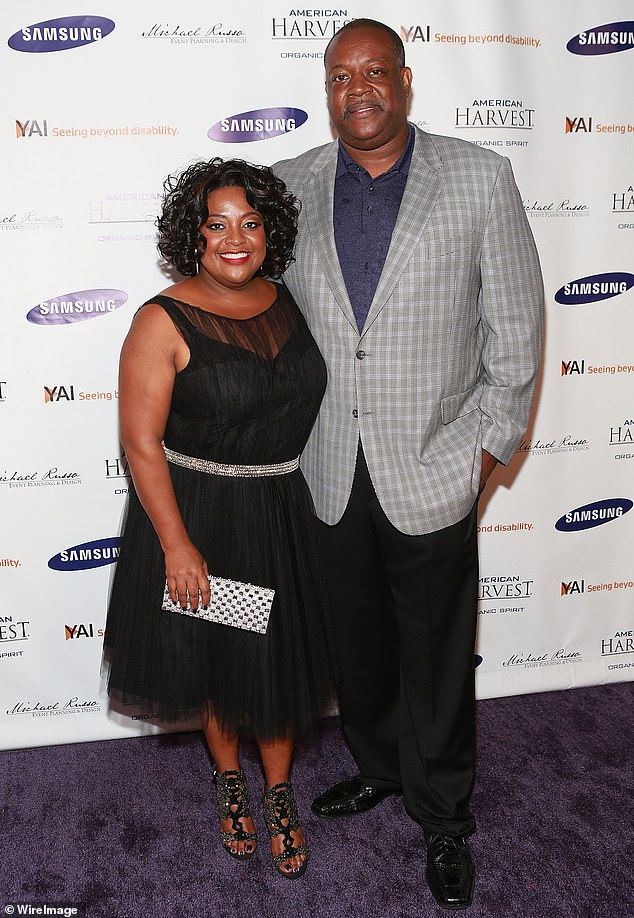 Twice married: Shepherd has been married twice. She was with Lamar Sally from 2011 until 2015. The couple had a contentious divorce that spanned for several years and involved a complex child support payment battle; Pictured 2014 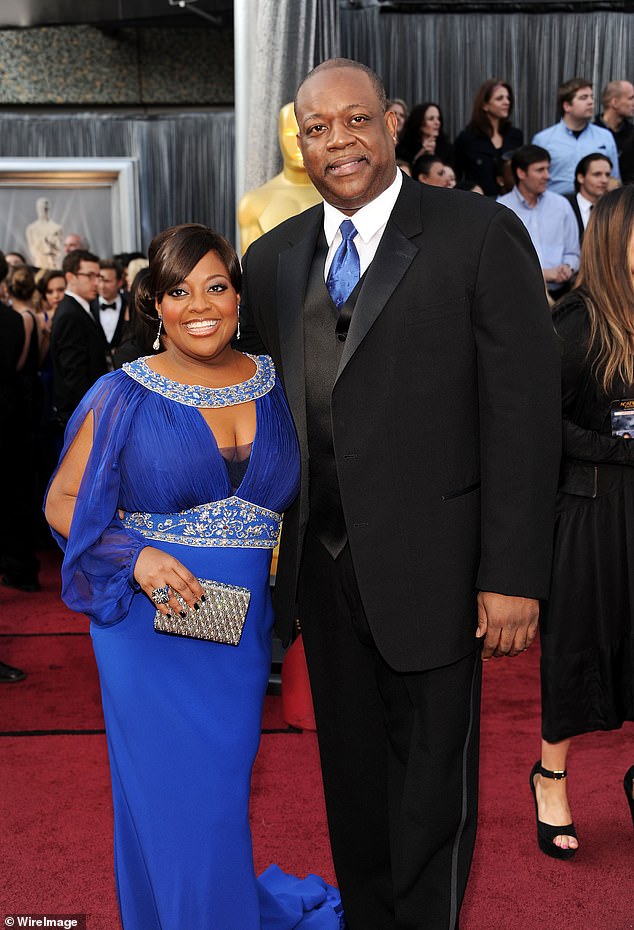 No luck in love: Prior to him she was wed to Jeff Tarpley from 2001 until 2010. Her first divorce also ended with a nasty custody battle over the couple’s son Jeffrey Jr; Pictured 2012

The original View lineup was made up of Walters, Joy Behar, Star Jones, Meredith Vieira and Debbie Matenopoulos.

Sherri penned a lengthy tribute to the late journalist upon hearing the sad news of Barbara’s passing on Friday. On Instagram, she uploaded of herself sitting next to Walters as the two were involved in a conversation.

The talk show host began her tribute by expressing, ‘Barbara was tough on me, but she was tough on those she loved. Barbara gave me a chance to grow. She encouraged me (no…she TOLD me) to speak up or be left behind. She told me to never take No for an answer.’ 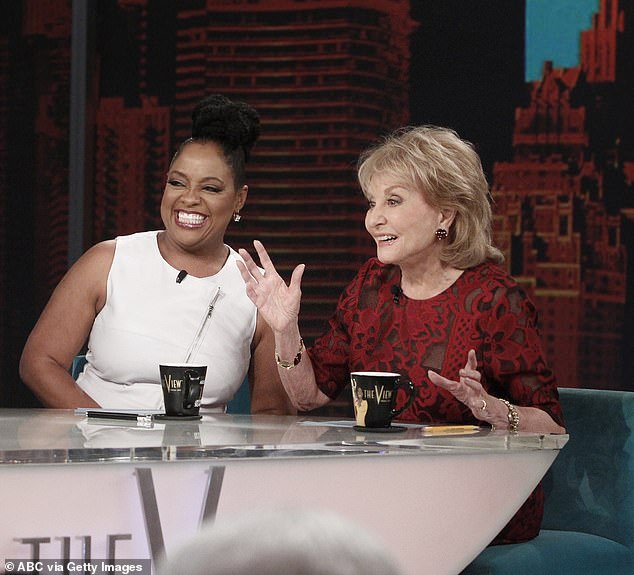 Permanent co-host: Shepherd – who joined The View in 2007 and left in 2014 – also remembered how Walters would ‘ferociously defend’ her despite ‘gaffes’ she made at the table; Pictured in a 2014 still from The View

She also added that Walters was close to her son, Jeffrey, and that the two hosts would enjoy dinners togethers. ‘I told her that I always wanted to end our evening with a sleepover in matching pj’s (you can imagine the look on her face).

Sherri called Barbara the ‘Mother Lion,’ and thanked her, ‘for giving a shy girl who didn’t like to debate a seven year chance of a lifetime. You believing in me has changed my life.’

During a past interview with People in 2020, Shepherd revealed that, ‘Barbara was so hard on me. I cried for three years in my dressing room because she was so hard on me, but she did it out of love.’

The TV personality added that the late news anchor would tell her, ‘I love you, I just need you to read a book, dear, and learn to defend what you believe. And speak up,’ further expressing, ‘It was the most painful experience that I’ve ever gone through, but it was the best experience.’

Lengthy tribute: Sheri left a detailed tribute to her fellow co-star on Instagram on Friday