A model and dogwalker who was allegedly killed by her boyfriend before being dumped in bushland has been remembered at a candlelit vigil for her ‘big smile’, ‘kind heart’ and ‘super power’ to make anyone around her feel special.

Shereen Kumar, 43, is the 22nd woman in Australia to allegedly die at the hands of another man this year, according to anti-domestic violence campaigners.

About 100 mourners braved cold weather to gather at Kenthurst Park, in Sydney’s north-west, on Sunday afternoon to pay tribute to Ms Kumar, including a pack of greyhounds brought by owners to honour her love of dogs.

The event comes just over a week since she was found dead in bushland four minutes away from her Dural home on July 23, bringing a four-day search to a gruesome end.

Her boyfriend Vincent Carlino, 37, has been charged with domestic violence murder.

The hour-long ceremony began with a priest offering a Hindu prayer as a white cloth was draped over a brick wall to make a makeshift memorial for the beloved mother-of-two.

Devastated friends and loved ones gathered in Kenthurst Park, in Sydney’s north-west, (pictured) on Sunday afternoon for a candlelit vigil in honour of Shereen Kumar 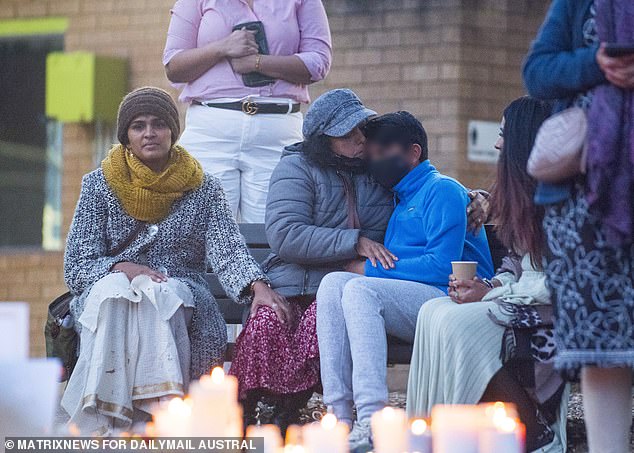 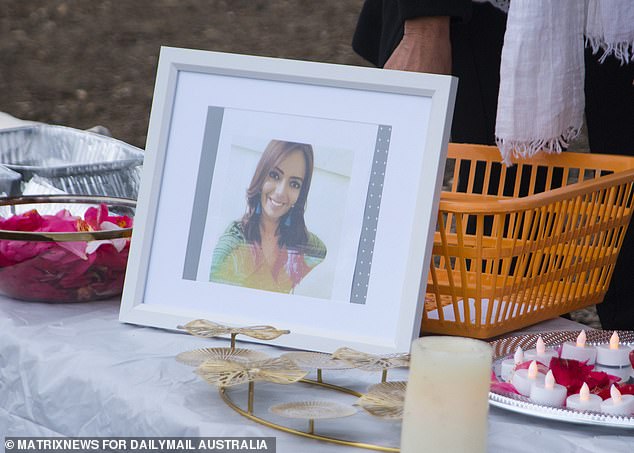 A photo of the beloved mother was set up on a white cloth to create a makeshift memorial, adorned with flowers and candles

A picture of the beaming 43-year-old was placed in the centre as mourners flocked to the front to place lit candles around it and lay bouquets of flowers.

Members of the community and loved ones then got up to share memories of Shereen.

Friend Erica said Ms Kumar ‘lit up a room and was infectious to everyone around her’.

She hoped that ‘wherever Shereen is tonight, or in whatever form, that she can feel the tidal wave of love we are sending out and that it brings peace and comfort to her spirit’.

Erica fought back tears as she described her friend as ‘non-judgmental, easy going, having the courage to follow her dreams, and a freedom fighter, who had a big smile’.

‘Shereen was always there with kind words for others. She was vibrant, a great mother, energetic, strong, thoughtful, beautiful, hardworking and determined. 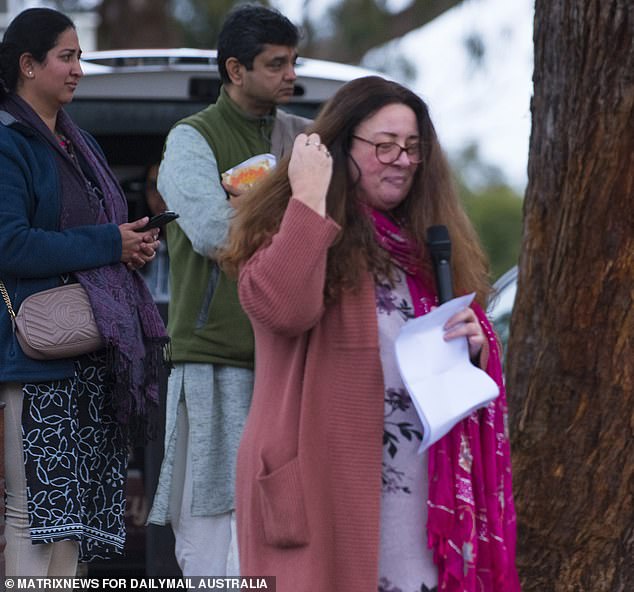 Friend Erica recalled her fond memories with Ms Kumar as she described the mother-of-two’s ‘wide smile, enthusiasm and can-do attitude’ 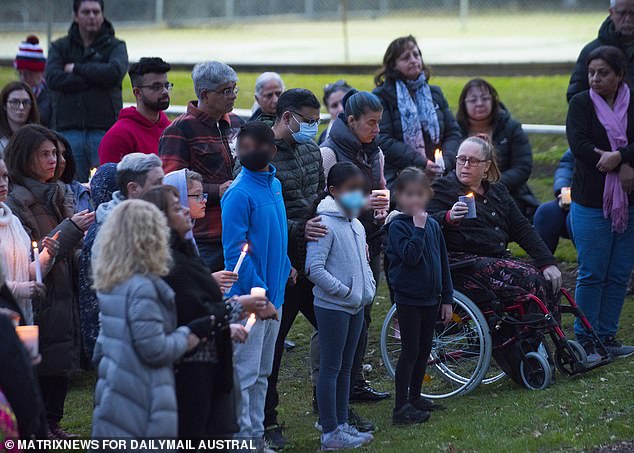 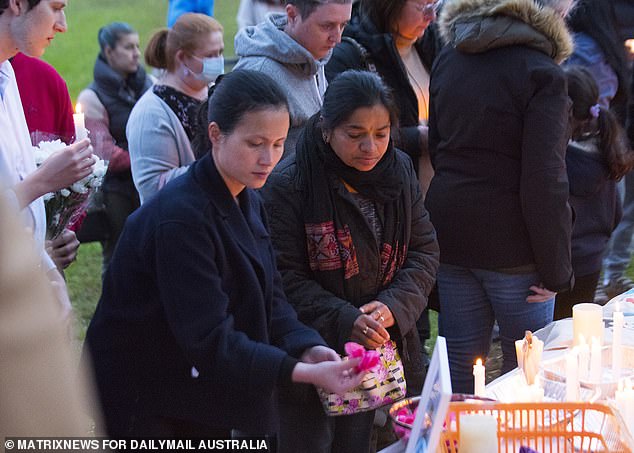 Mourners gathered around the memorial to lay flowers and candles 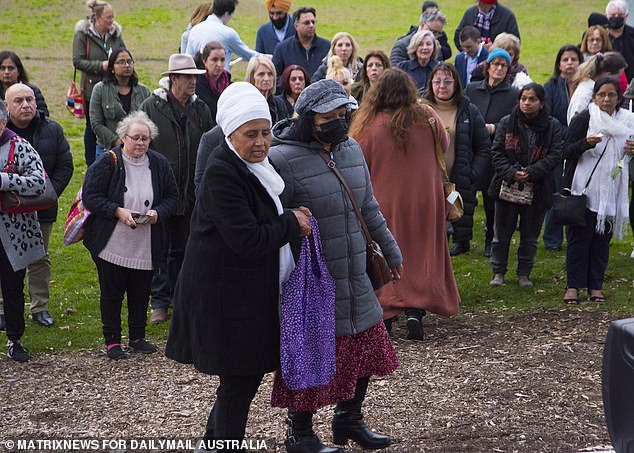 ‘She had the biggest can-do attitude,’ Erica said.

‘Start a HR business? Sure. Turning modelling into a career? Absolutely. Still make time for friends and memories? Always.’

Erica said Ms Kumar summed up her spirit during one afternoon when they were drinking wine on the beach and it began raining: ‘Better to be in the rain than to not be on the beach at all.’ 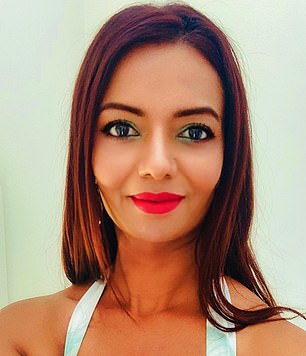 Ms Kumar, 43, (pictured) was remembered for her kindness to others and determined, hardworking nature

But despite the numerous positive ways Ms Kumar could be described, foremost, her spirit was felt by all who knew her.

‘From the moment you walked into that wide smile, energy and enthusiasm, you sensed you were special to her,’ Erica said.

‘That was her secret power. In a world increasingly self-centred, she was far more interested in hearing about others than she was talking about herself.

‘Her wide smile, natural intelligence and heart drew us like moths to a flame. She was our sun.’

Erica said Ms Kumar was ‘physically stunning’ and natural in front of the camera.

She was particularly photogenic on nights when their group of friends would take an ‘obligatory photo’.

While everyone else would ‘shuffle into a line’, the model would ‘seamlessly transition from pose to pose’. 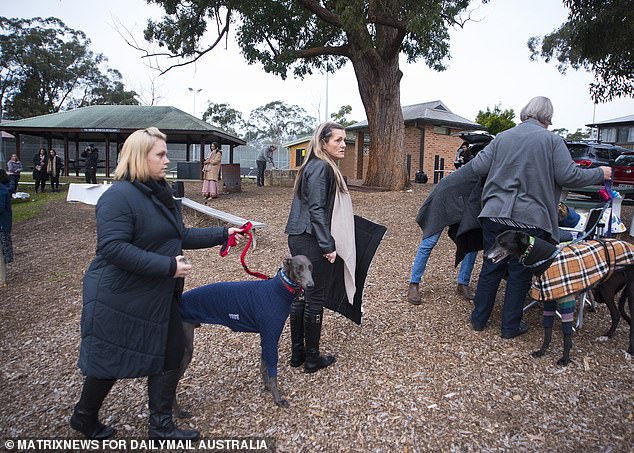 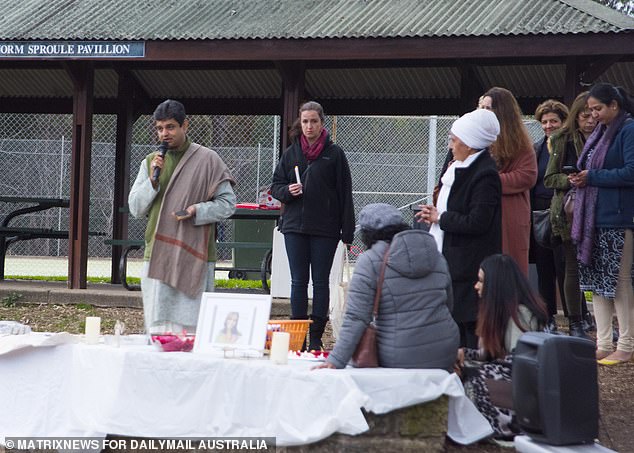 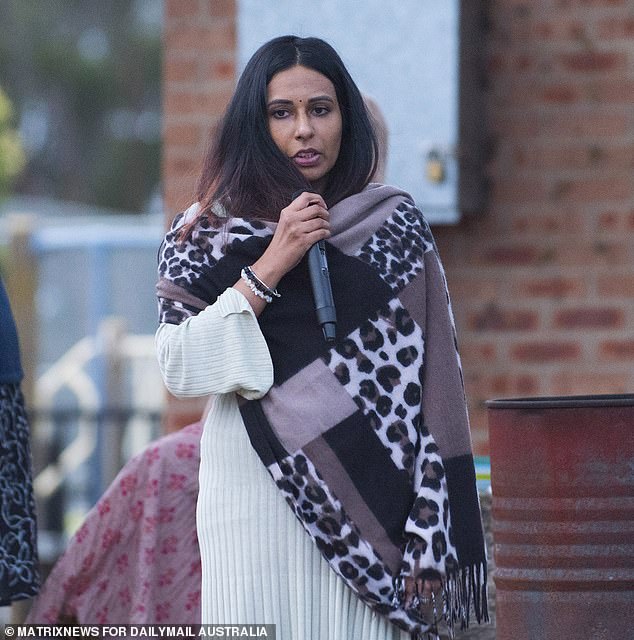 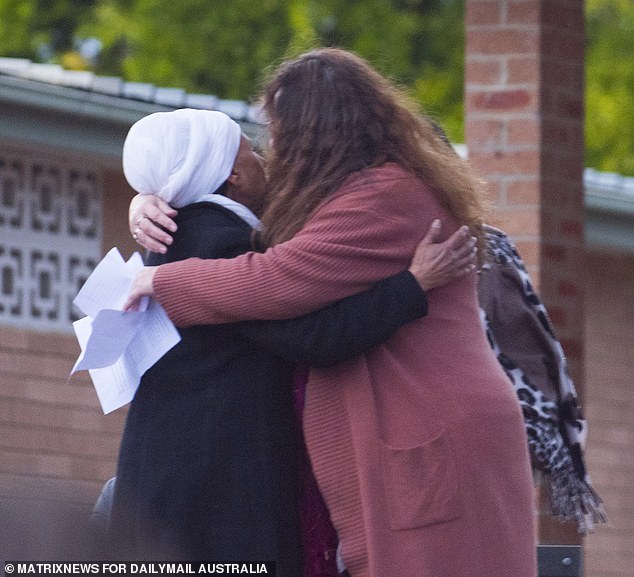 Erica joked it became annoying as the pair’s photographic pursuits would delay their hikes as the duo would stop at ‘every interesting rock formation’ to take snaps.

‘We would finish entire picnics waiting for them to catch up,’ she said.

After heeding her friend’s advice, Ms Kumar began modelling and took ‘breathtaking photographs’, with Erica noting her favourite was a recent shoot featuring the mother-of-two ‘looking like a goddess’ dressed as Medusa.

Despite her new career, Erica said her friend was always incredibly down to earth.

On occasions when they would take group photos, Ms Kumar would ask Erica, a talented writer, to curate the post, leading her to pen humorously embarrassing captions.

Erika said Ms Kumar was delighted each time and found the posts hilarious. 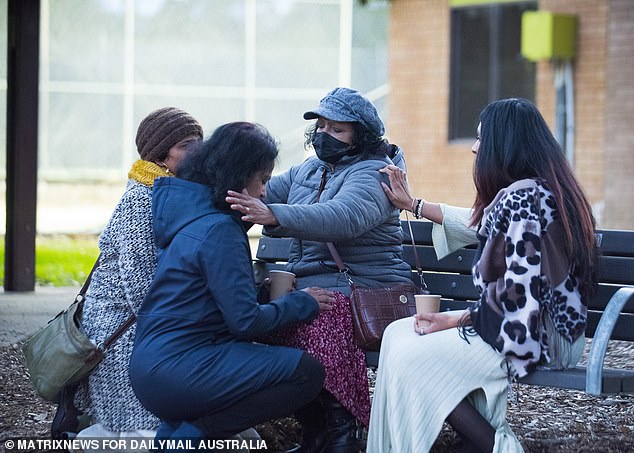 Ms Kumar’s mother, sister Nikki, and her friends embrace as they paid honour to the model 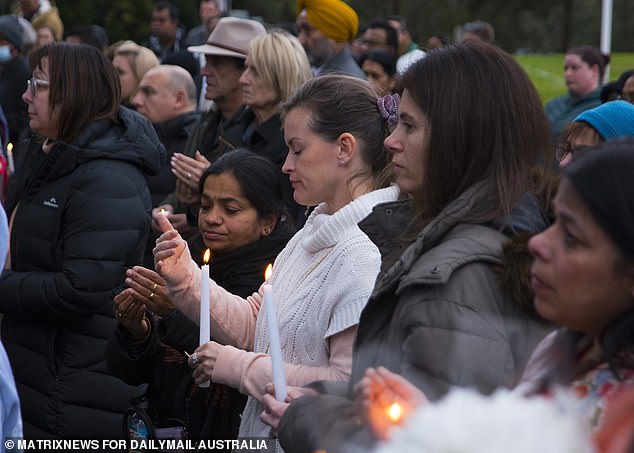 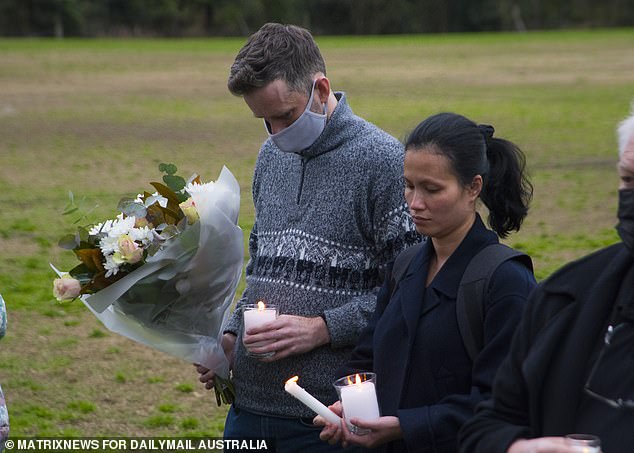 ‘She might have spent a lot of time in front of the camera, but she wasn’t a vain princess,’ Erica said.

‘She was grounded, humble, and appreciated anything that gave back a good laugh.’

‘She and I bonded over a love of life and outright silliness.

But of all of her friend’s incredible qualities, Erica said she would forever miss her laugh.

‘Her laughter crowed out and her head tilted back, deeply immersed in the moment,’ Erica said.

‘Never hearing her laugh again will be my greatest loss.’

Erica said she is still hoping her friend is away on a trip and will be back knocking on her door soon and is struggling to come to terms with the fact her life was tragically cut short.

‘Upon hearing her body was found, I let out a howl. Long, loud, rooted in the agony – what some of us feared might be possible,’ she said. 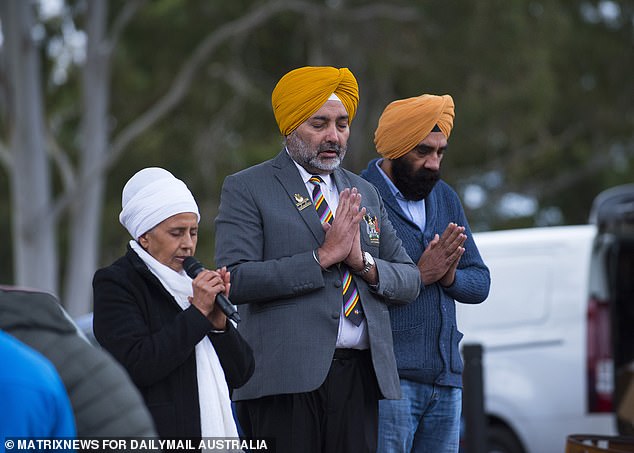 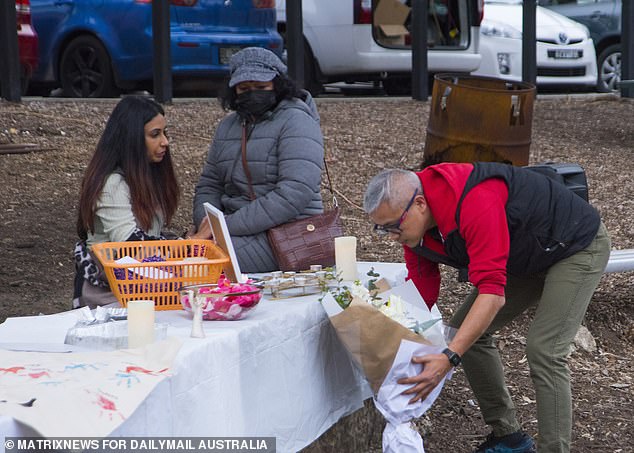 ‘Since then I have felt dead inside, unable to shed a tear. This is surreal, a nightmare that is lingering into our wakefulness.

‘How could someone so full of love, so kind, with so much yet to contribute have their life [allegedly] snuffed out by someone so inadequate?

‘I am devastated I could not save her. That none of us that tried could. And that her beautiful children have been deprived of so many wonderful memories with this incredible woman who really knew how to pack the most into life.

Erica said that she was angry her beautiful friend had become a statistic, but urged everyone to ‘not for one moment’ believe what happened to Ms Kumar was because she was ‘gullible or weak’.

‘Shereen Kumar was the strongest woman I know, which means we have to work harder with more insight and more resources to keep women safe,’ she said.

‘This must become a national priority.

Ms Kumar’s sister Nikki said she was one of the ‘kindest and most beautiful souls’.

‘Wherever she went, she was loved and cherished by everyone,’ Nikki said.

‘She always spread her love and kindness and positivity wherever she went.’ 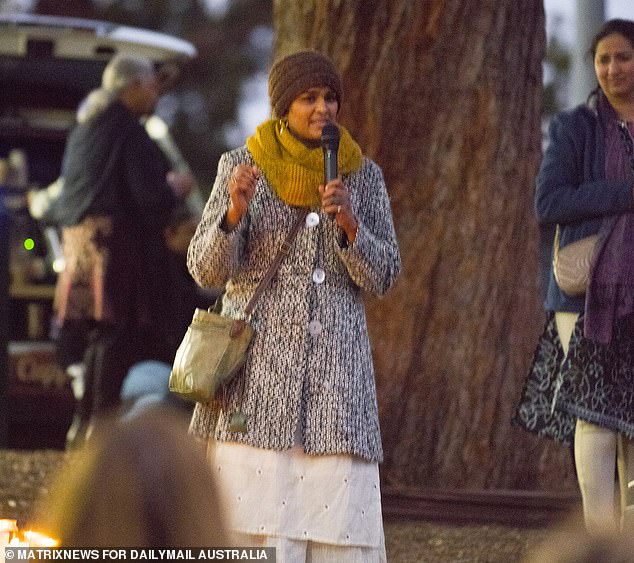 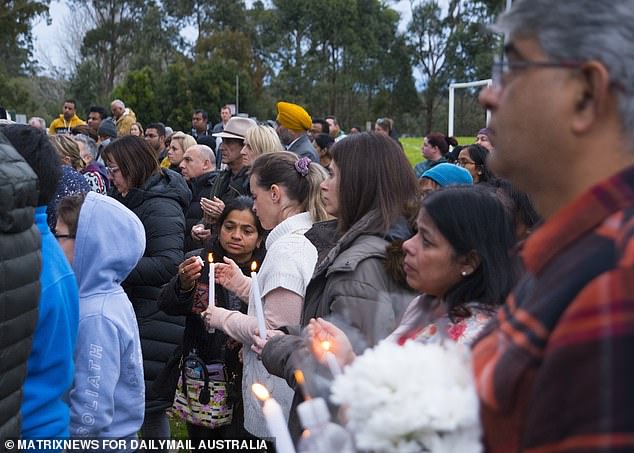 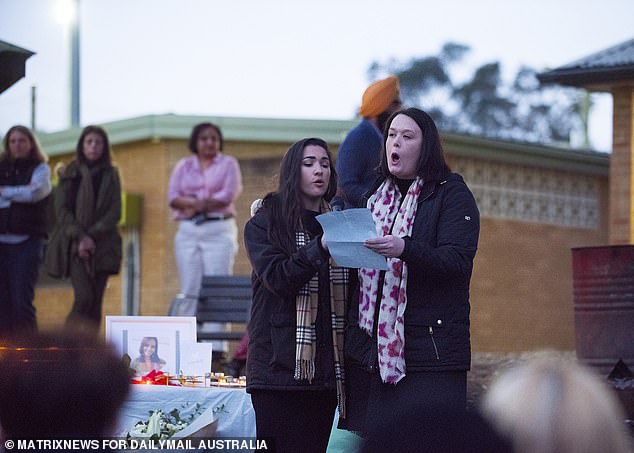 Nikki said that if there was anything she learnt from her sister, it was that it’s ‘hard to be kind and positive under any situation’.

‘She had the most beautiful smile, and I am sure she is smiling down on each and every one of us,’ she said.

‘Thank you all for coming, me and my family really appreciate it.’

A member of the Sikh community walked in front of the crowd to offer a prayer for Ms Kumar’s spirit.

Another friend who met Ms Kumar at school travelled to Australia from New Zealand to be at the vigil.

She told the crowd how Ms Kumar was a protective and fierce friend, and how during their last trip together in 2018 the mother-of-two spent the whole night carrying her drink around to ensure it did not get spiked.

As the ceremony drew to a close, Rachel Jordan, Ms Kumar’s neighbour who she never got the chance to know, stood in front of the crowd with her friend Mairead to sing a rendition of over the rainbow in honour of the slain mother.

Their voices carried over the silent night, bringing some members of the crowd to tears as they reflected on the friend, and her vibrant life, now lost. 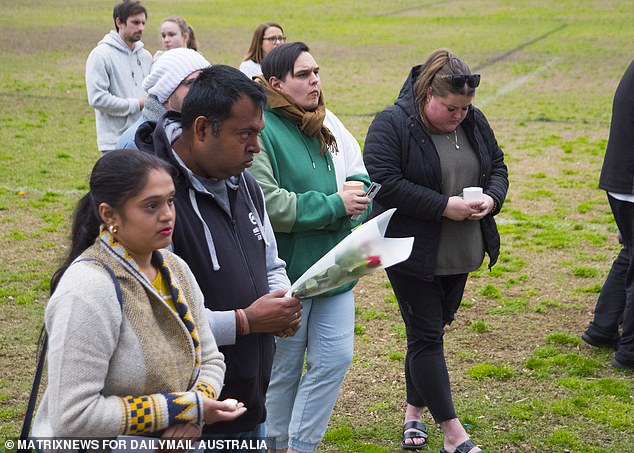 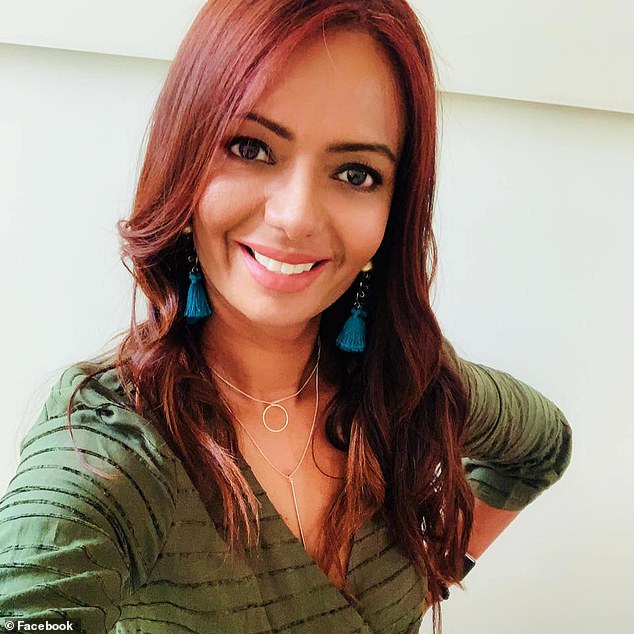 Ms Kumar was found in bushland four minutes away from her Dural home ending a four-day search. Her boyfriend Vincent Carlino has been charged with domestic violence murder

Ms Kumar’s ex-husband Gurpreet Beehan told Daily Mail Australia he is focusing on the tumultuous weeks and months ahead as the family prepare to farewell Ms Kumar then brace to face her alleged killer in court.

‘We just like to ensure she is brought justice,’ he said.

Police will allege Carlino killed Ms Kumar sometime after 9pm on Wednesday July 20, wrapped her in plastic and tape, then dumped her body 2.5km from their home.

Carlino initially told police Ms Kumar was last seen leaving her home on Taylors Road, in Dural, in her pyjamas at about 9pm on Wednesday.

Speaking to Daily Mail Australia on July 20, Carlino said he was ‘extremely worried’ about his missing partner.

After days of searching, detectives found a body matching the woman’s description just in bushland off Laurie Road last Saturday at 5.50pm

Just after 11.30pm that day, police arrested Mr Carlino at the home he shared with Ms Kumar.

He was taken to Hornsby police station and formally charged with murder (DV). He was refused bail to appear in Parramatta Bail Court the following day.. 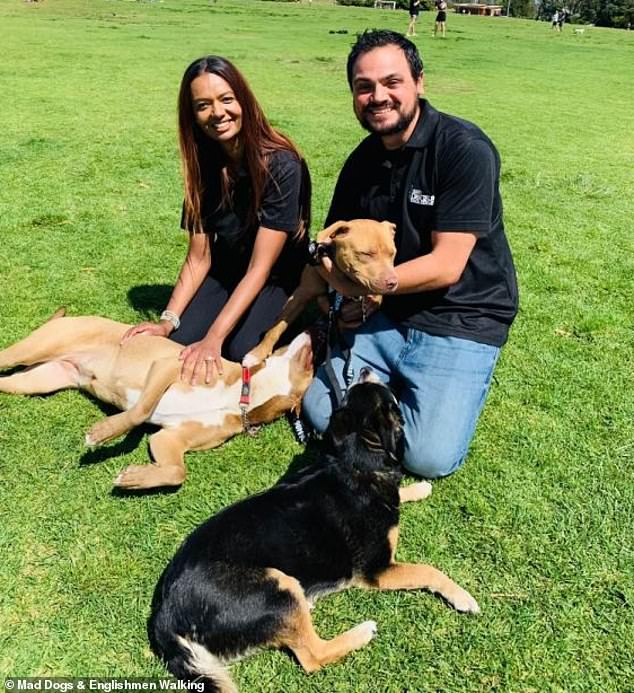 In court, Carlino did not apply for bail, with his lawyer Elias Tabchouri telling reporters his client was ‘very concerned’ about the allegations.

Mr Tabochouri said it was still ‘too early to say’ how his client intends to plead.

‘At this stage I don’t have any instructions other than to wait for the evidence and go from there,’ Mr Tabchouri told 7News.

Just four months after striking up a relationship in April 2021, Ms Kumar and Carlino went into business together; starting a pet-walking franchise, Mad Dogs & Englishmen.

Ms Kumar later became the Director of the Chatswood Mad Dogs and Englishmen franchise while Carlino ran the Hornsby business.

Ms Kumar will be farewelled by loved ones in a private funeral service in coming days.