In Newham, east London, one in every 21 people is homeless.

The borough has the highest local level of homelessness – meaning living in temporary accommodation or sleeping on the streets – in England, according to charity Shelter’s latest report.

Westminster, the political heart of the country, is second with one in every 27 people.

Shelter says around 271,000 people are homeless in England today, or one in every 208. The total includes 123,000 children without a permanent residence.

Of the total, 2,400 people are sleeping rough on any given night, and 15,000 people are in hostels or supported accommodation.

The majority, nearly 250,000, are living in temporary accommodation – most of which are families. The number of people living in this kind of housing has risen by 74 per cent in the last 10 years.

An average of 1,000 calls per day are made to Shelter’s emergency helpline, of which almost eight in ten (78 per cent) callers are homeless or at risk of becoming homeless. This figure has increased by 8 per cent since last year.

Shelter’s research found that homelessness has a hugely detrimental impact on the lives and health of those going through it.

It is also harder to access essential services. Two in five (39 per cent) of people say temporary accommodation makes it harder to get healthcare appointments.

Polly Neate, chief executive of Shelter, said: ‘Our frontline advisers are working tirelessly to help people who are desperate to escape homelessness – from the parents doing all they can to provide some shred of a normal family life while stuck in an emergency B&B, to the person terrified of another night sleeping rough.

This is Money spoke to one adviser helping callers. Chris Moore, 45, is from Sheffield and in September celebrated working for Shelter for 8 years. He joined the charity as a legal adviser after 15 years working in the legal and insurance industry. 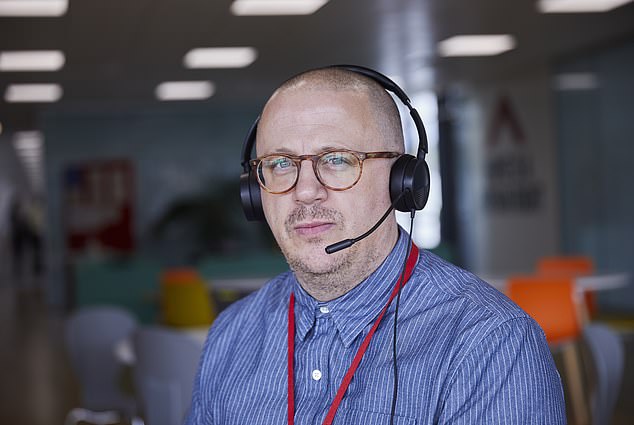 Chris Moore, 45, has worked for housing and homelessness charity Shelter for over 8 years

A lot of the role, he says, is letting people know their rights. For example, it is common for people to think they need to leave their property on the day an eviction notice expires – but that isn’t the case.

‘We can say, “You haven’t got to go anywhere; it could be another 3 or 4 months before you have to leave” and that’s a big difference,’ he says.

‘They can’t believe they have more time; it changes their mindsets. You are arming people with information on what their rights are and empowering them to change their situations themselves.’

Chris says he has noticed a rise in cases of no-fault evictions – known as section 21s, attributing the rise to the additional costs landlords are facing as a result on the increase in mortgage rates.

In the past rent increases were something we would advise on fairly rarely, but now we are talking about it on almost a daily basis

This means that either they are selling their buy-to-let property and it is being bought by an owner-occupier, meaning the tenant must leave, or increasing rents to a level where it is no longer affordable.

According to Chris, instances of landlords trying to increase rents by alerting the tenants with a text are becoming more frequent.

However, in order for the price hike to be legal, he says landlords have to follow the correct procedure – which normally means giving notice and amending or creating a new tenancy agreement. Otherwise, the tenant is entitled to only pay the original amount.

‘In the past the rent increase would be something we would advise on fairly rarely but now we are talking about it on almost a daily basis,’ says Chris.

For those who end up needing temporary accommodation from the local council, there are often further issues.

First, they need to qualify for accommodation. Councils have a legal obligation to provide accommodation for certain groups including pregnant women, families with children and those who are vulnerable due to health issues.

However, under the law the property needs to be ‘affordable’, taking into account living expenses such as commuting and utilities. 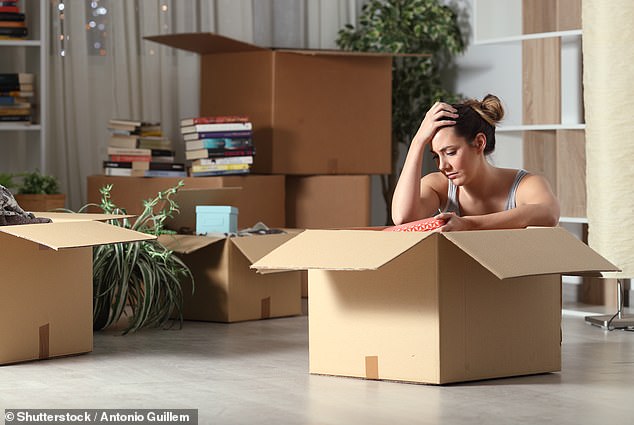 ‘Councils struggle to find these properties,’ Chris explains. ‘They try and move them out of the city where rents are cheaper, but the issue there is largely around children and their education.

‘There are limits of how far they can move people out. And again cost is an issue, if you need to take three buses to school, is the travel card affordable?’

>> Work out your household budget using This is Money’s calculator

But sometimes even getting the council to respond is tricky, and this is another area where the team at Shelter can help.

Not only will they advocate to the authority directly on behalf of the caller, including threatening legal action, but if applicants are entitled to accommodation and the council hasn’t responded it is in breach of its legal duties.

They can also advise on action against landlords and refer tenants to solicitors or legal aid providers if they qualify.

This is the part of the role Chris says he enjoys most, the times when you get what he calls ‘tangible outcomes’.

‘When you’re on a late shift advocating for someone who is street homeless, the council office is closed and its 8pm, it’s up to us to deal with the council out of offices team. I love it to be honest because you’re fighting the good fight.

How Shelter can help

Note the helpline only gives advice on English housing law.

Try Shelter Scotland or Shelter Cymru  if you need advice for these areas.

‘Someone has been stuck in a car park all day trying to speak to the council and then I am the one who manages to get them accommodation because the council can’t pull the wool over my eyes. Giving people hope is what you’re doing a lot of the time.’

But he warns the situation as a whole is likely to deteriorate further. While many benefits will rise in line with inflation as of April this year, the uprating doesn’t cover housing benefits.

The allowance is frozen at 2020 levels, although rents rose to record levels last year. The average rent in Britain recently soared to more than £1,200 a month for the first time on record.

It is a rise of £80 a month or 7.1 per cent higher than the same time the previous year.

Chris says he would like to see the benefit unfrozen. ‘As rent goes up that gap [between housing benefit and rent] gets wider and the shortfall is bigger so people have to make it up with other benefits or taking up more jobs,’ he argues.

Research from specialist lender Market Financial Solutions found that 49 per cent of renters were worried they would not be able to pay their rent in 2023.

And it’s not just renters who are facing financial difficulties. The number of home repossessions rose 15 per cent between July and September last year compared to the three months before, as mortgage rates spiked and the cost of living crisis put pressure on household budgets.

In total 700 homeowner mortgaged properties were taken into possession in the third quarter of 2022, according to data from UK Finance.

But more longer-term investment needs to be made into the social housing sector Chris adds. ‘At Shelter we always want people to be as secure a possible and if they are in social housing they will be more secure than in private rented, and that stability makes a huge difference.’ 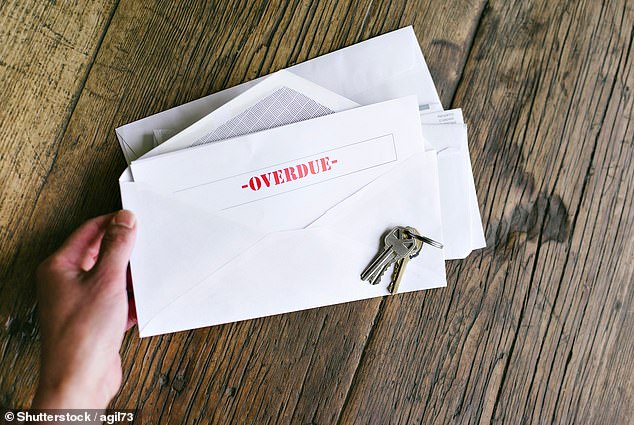 As rents rise, an increasing number of tenants may struggle to pay their landlord every month

Freddie Poser, director of housing campaign group Priced Out, added: ‘Homelessness represents the sharpest and most heartbreaking end of the housing crisis. With spiralling housing costs, more and more people are pushed into precarious situations and homelessness.

‘Without expanding the housing supply, homelessness and the wider housing crisis will continue to get worse.’

For those worried about, or at risk of, becoming homeless Chris urges them to remember help is available.

As well as its helpline, Shelter’s website also contains resources such as templates for letters and a live chat function where you can talk to one of the charity’s advisers.

And for those not in need of help but alarmed by the homelessness crisis, he asks them to consider writing to their MP about the issue.

‘These problems that we hear about are getting increasingly common and it’s important to know there is help out there,’ he adds.

How can you save money?

The cost-of-living crisis has put our finances into sharp focus. If you’re looking for inspiration to save money or audit your finances, the following checklist might help:

Check your savings rate: Many big banks continue to pay a pittance while challengers are raising rates. Here are the best savings deals from our independent tables.

Haggle a better broadband, TV or phone deal: Many of us are guilty of overpaying once a contract expires with telecoms giants. Compare broadband, phone and TV packages to see if you can save money.

Compare insurance: When it comes to car, home and travel insurance, it is important to shop around, make sure you have the right level of cover and use a highly-rated company. See if you can find a cheaper deal with our comparison service powered by Compare the Market.

Mortgage rate: Whether you’re buying a new home, remortgaging to a new deal or buying an investment property, our partner L&C can help you find the best rates – and you’ll pay no fee for their advice.

Energy tips: Energy prices are soaring. Here’s what you need to know, whether you can still fix and energy-saving tips that work.