After administration and acrimony in one of Derby’s darkest weeks, the actual football offered no solace.

Wayne Rooney’s dogged side were moments away from a morale-boosting point having played the final 33 minutes with 10 men.

It had been backs-to-the-wall and bodies-on-the-line as Sheffield United laid siege with increasing desperation.

Derby were so close to holding but not for the first time in the afternoon they self-destructed.

Goalkeeper Kelle Roos had suffered a rush of blood to the head when he brought down Billy Sharp as he broke clear, earning the red card that put his team under the cosh.

And then Curtis Davies – until that point absolutely unbeatable alongside Phil Jagielka in Derby’s defence – inexplicably raised his arm to handle a Conor Hourihane cross and concede an 88th-minute penalty that Sharp rammed home.

It was frustrating for Rooney because they were the match of United until the red card and could easily have emerged with three points to lift their points column back into positive territory.

Even after Sharp’s goal, they could have snatched a draw when Tom Lawrence struck the post in stoppage time. 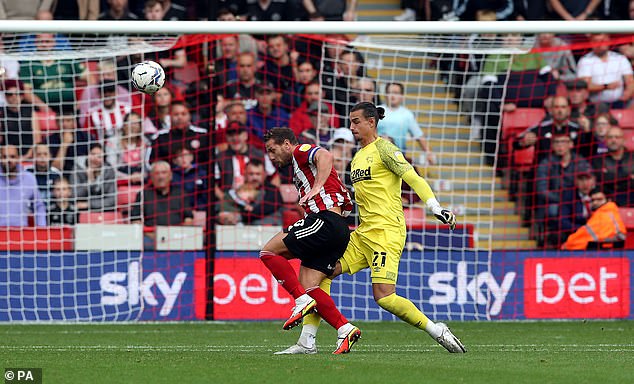 Of course, positive results on the field may prove academic anyway if the EFL hand down further points deductions. Derby are, for all intents and purposes, bound for League One.

But their fighting spirit was brilliant – Bramall Lane was growing increasingly exasperated as moves broke down time after time – until Davies erred.

Both teams enjoyed decent spells of pressure and good openings during an even first-half.

The hosts threatened first with Sharp played in behind Derby’s defence by George Baldock’s high ball but one-on-one with Roos the Blades skipper blazed over.

It was a surreal afternoon for 39-year-old Jagielka, returning to the club he played over 300 matches for in two spells wearing the colours of Derby following his summer move.

He received a warm round of applause from the United fans when his name was read out but may not have been as popular had a 22nd-minute looping header from Louie Sibley’s corner not bounced off the crossbar.

Sharp would see another couple of half-chances come and go but Derby ended the half in the ascendancy. 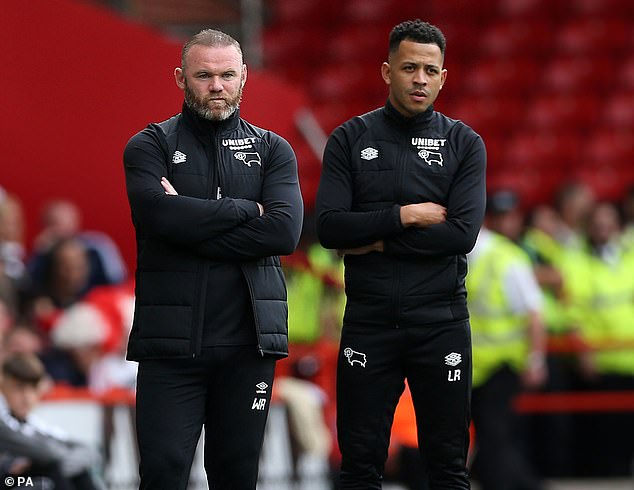 When Lawrence’s volley on the edge of the area was blocked and fell nicely for Sam Baldock, he connected sweetly but saw his shot whistle past the post.

And Blades keeper Robin Olsen was called into action for the first time to beat out Graeme Shinnie’s strike from outside the box.

Yet United would have gone in at the interval ahead if not for Lee Buchanan’s slide tackle to thwart Ben Osborn right in front of goal.

The Roos sending off forced Rooney to reshuffle. Jason Knight was coming on for Ravel Morrison anyway but Sibley was the man sacrificed for replacement keeper Ryan Allsop. The resulting Blades free-kick was fired into the wall.

The 10-men were immediately besieged. A shot by Iliman Ndiaye took a crucial deflection off Davies to send it just wide of the near post.

United forced a succession of corners in front of the Kop and from one of them Gibbs-White wasn’t far away on the half-volley from just outside the area.

Ndiaye wanted a penalty when bundled down in the box but was left disappointed. The home fans likewise when he somehow sent a free header wide from five yards after a Gibbs-White cross.

It looked like the winner would never come but Sharp made no mistake from the spot.