Students have today been dealt another blow as more universities shift to online classes in a desperate move to curb Covid outbreaks.

More than 80 universities in the UK have reported at least 5,000 confirmed cases of Covid-19 as the virus spreads at an alarming rate among students and staff.

Five of the country’s biggest institutions have now announced they will move towards a virtual learning model.

The University of Manchester, where there have been more than 1,000 cases since September 21, and Manchester Metropolitan University have today shifted to online classes.

The University of Sheffield, where more than 500 students and staff have tested positive since the start of term, will also move to online lectures from Friday.

And all programmes at Northumbria and Newcastle universities will be delivered virtually unless face-to-face teaching is an essential part of the course. The temporary changes will come into effect from tomorrow for three weeks.

This comes as more than 300 students and eight members of staff at the University of Birmingham have tested positive for Covid, it was revealed today.

And the University area of Exeter last night leapt into the top ten of areas in England with positive cases with a rise from 127 to 223.

The university today confirmed a number of students had been sent home for ‘breaching Covid guidelines.’

As the infection rate continues to spike at an alarming rate among students, it has emerged: 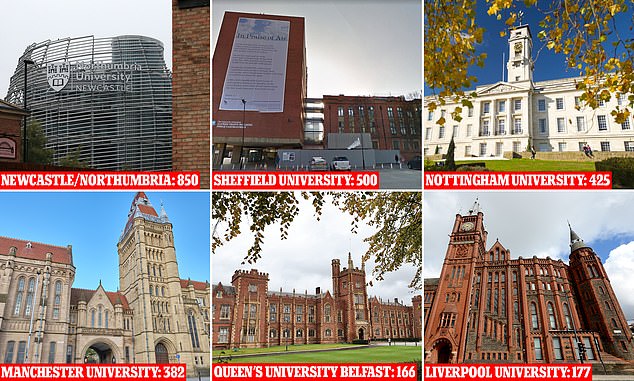 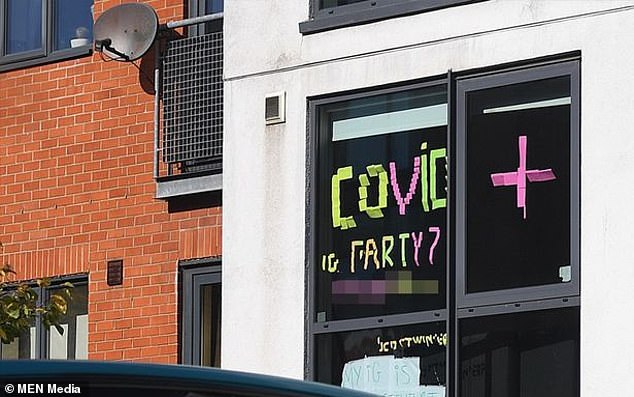 Which UK universities have the 5,000 Covid cases?

More than 300 students and eight members of staff also tested positive for the virus between September 30 and October 6.

The Manchester universities said they had made the decision together in consultation with the area’s director of public health, supported by Public Health England.

They added they would increase the level of online learning for most programmes from Wednesday until October 30, which would be reviewed on October 23, and face-to-face teaching would continue for some clinical or practice-based classes.

The University of Sheffield said face-to-face teaching would continue on Wednesday and Thursday before it is suspended from Friday, with in-person classes to resume on October 19.

The move to online learning is a drastic step to stop the spread of coronavirus among the student population.

But they will increase demands for students to receive refunds for tuition fees.

On Monday night the University of Nottingham revealed it had recorded 425 cases of the virus among staff and students.

Some 400 students and eight staff at the East Midlands institution are now self isolating.

Institutions in Northern Ireland are also bearing the brunt of the crisis, with Queen’s University Belfast ‘closely monitoring’ an increase in coronavirus cases.

It has been reported that 166 students and staff at the south Belfast university have tested positive for Covid-19. 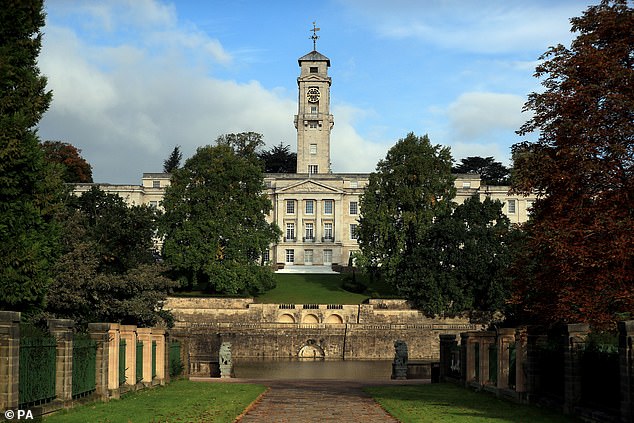 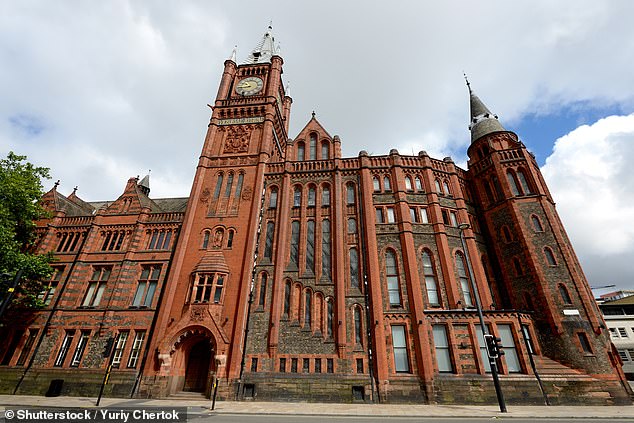 As of last week, 177 University of Liverpool staff and students have tested positive for Covid 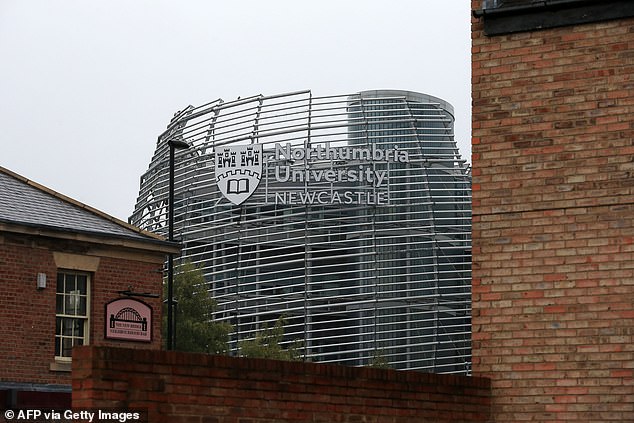 Liverpool University saw 177 staff and students have tested positive as of last week.

Bath University has had a spike of 18 cases in the last 24 hours, taking its total to 48 new cases in seven days.

More than 850 students at Northumbria and Newcastle universities were told to self-isolate after testing positive for coronavirus.

On October 2, Northumbria University confirmed 770 of its students have contracted Covid-19, with 78 of those displaying symptoms.

And a further 94 confirmed Covid-19 cases were also recorded among students at Newcastle University, bringing the city total to 864. 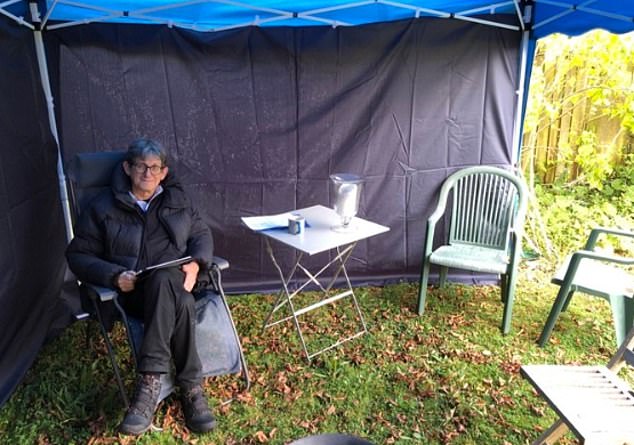 Principal of Lady Margaret Hall at the University of Oxford, Alan Rusbridger, has taken his classes outside. He tweeted: ‘Didn’t feel right to be greeting 230-odd freshers to ⁦⁩ through individual Zoom meetings. So here I am in my field office in my thermals seeing them all one-on-one in a bracing fresh air fresher experience. And lovely they are’ 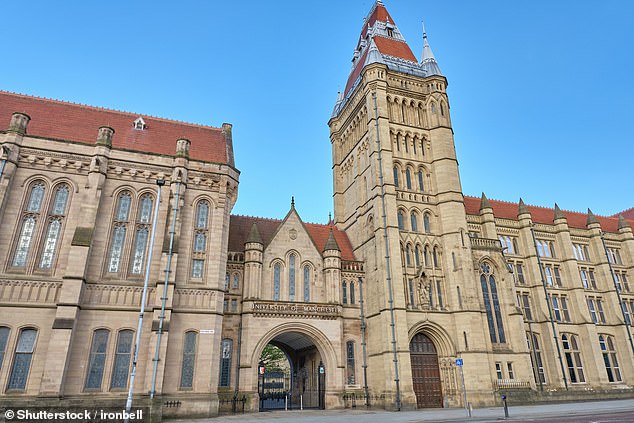 Manchester University (pictured), where there have been 382 coronavirus cases since September 21, joined with Manchester Metropolitan University and the University of Sheffield in announcing a move to online learning to protect the health of students and staff

Universities vow to ensure students can access essentials during self-isolation

Vice-chancellors have pledged to support students who have to self-isolate in university halls when campus outbreaks occur.

Universities UK (UUK), which represents 139 institutions, has published a checklist to help universities support student wellbeing in the autumn term as they face a variety of challenges amid the coronavirus pandemic.

It comes after students have hung signs out their windows claiming they did not have food.

A surge in cases has led to thousands of students having to self-isolate in their halls, including Manchester Metropolitan and Glasgow University.

But UUK president Professor Julia Buckingham, vice-chancellor of Brunel University, said that the vast majority of students are being ‘looked after extremely well’ by universities during lockdown measures.

The checklist suggests that universities should encourage students to disclose any pre-existing or current mental health issues, and encourage them to use student wellbeing and mental health support services.

Institutions could provide a Covid-19 contact, where affected students can report symptoms and seek support, and offer online activities to help maintain social interactions during self-isolation.

The University and College Union (UCU) has welcomed the move by the Manchester universities but said virus outbreaks could have been prevented had the decision been made earlier.

Meanwhile, staff at the coronavirus-hit Northumbria University have called on vice-chancellor Andrew Wathey to resign as UCU members agreed to ballot for industrial action over health and safety concerns.

The university announced on Friday that 770 students had tested positive to Covid-19, including 78 who were symptomatic, with those testing positive now self-isolating in their accommodation.

Newcastle is among the worst affected cities in the UK, with its council leader Nick Forbes joining the leaders of Leeds and Manchester to write to the Health Secretary on Tuesday calling for new national restrictions to slow the spread of the virus.

Earlier, the universities minister said students could call a new helpline if they had concerns about coronavirus.

Michelle Donelan announced the Department for Education (DfE) is launching a hotline this week – in conjunction with Public Health England (PHE) – dedicated to university staff and students.

The minister said it would be ‘unacceptable’ for students to pay high tuition fees if an institution failed to provide support or high quality provision.

Ms Donelan added universities had the power to lower tuition fees if they did not believe they were providing a quality learning experience.

The universities minister said the DfE was working with institutions to bring forward the end of term to ensure students who needed to quarantine could still return safely to their families in time for Christmas.

Her comments come after education unions met with schools minister Nick Gibb and Ofqual chief Glenys Stacey about the timetable of the 2021 exams.

This comes as university students are throwing ‘Covid positive’ parties as they desperately try to salvage their social lives amid draconian lockdown measures on campuses.

Freshers at the University of Manchester and Northumbria University say undergraduates confined to their halls of residence are throwing 24-hour parties as they remain under stringent restrictions.

One physics student at the University of Manchester told the Guardian that a party at their Fallowfield campus halls of residence was broken up by security on Saturday.

The 18-year-old told the paper: ‘There was a flat party a few days ago which had a policy that you could only get in if you were positive. It was like their health-and-safety measure.’

A student from Northumbria University also told the Guardian that parties were still rife in halls.

Furious students self-isolating at Lancaster University share anger after being charged £17.95 a day to have meals delivered and £7 for washing 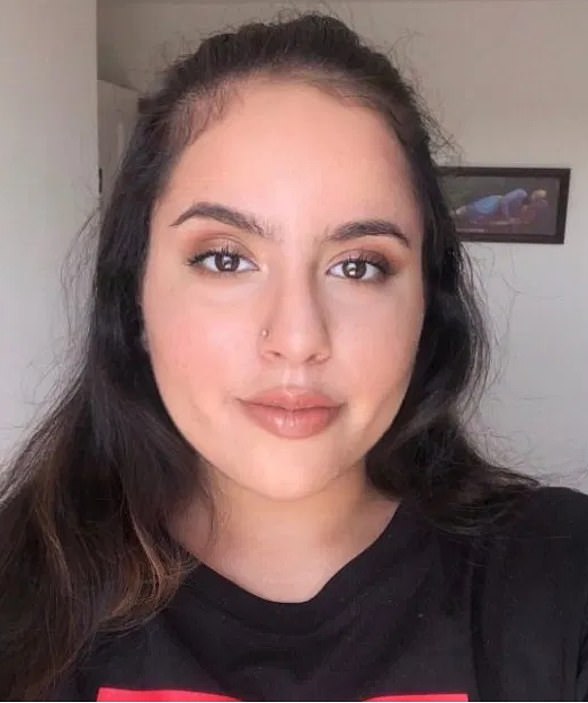 Bhavreet Dulku, 18, a first year studying Politics, International Relations and management, said: ‘My uni charging £17 a day for food if you have to isolate is an absolute shambles’

A furious student has revealed how she and hundreds of others self-isolating at Lancaster University are being charged an ‘extortionate’ £17.95 a day for food worth just £2.70.

Bhavreet Dulku, 18, a first year studying Politics, International Relations and management, tweeted: ‘My uni charging £17 a day for food if you have to isolate is an absolute shambles. How can they expect everyone on budgets to be able to afford that?’.

The university, which is also charging students £7 to do their washing, has been accused of ‘profiting’ from the charges to those locked down in halls of residence. 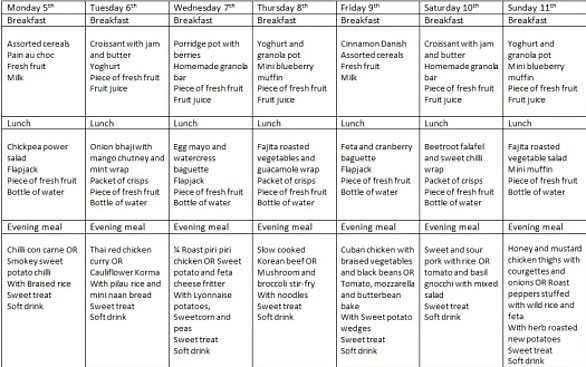 On this week’s menu, shared on the Lancaster University website, isolating students analysed the ingredients of one day’s menu and claimed the real cost from ASDA would be just £2.70

Ms Dulku’s plea has provoked an angry reaction on Twitter with an online petition calling for a reduction in the food fees attracting nearly 1,000 signatures.

On this week’s menu, shared on the Lancaster University website, isolating students analysed the ingredients of one day’s menu and claimed the real cost from ASDA would be just £2.70.

Adding the cost of distribution, they brought the total to only £4.00.

Others pointed out that the weekly total of £125.65 was beyond most students’ means.

The menu included one hot meal each day.

Ms Dulku, from Derby said: ‘Normally you’d spend about £17 a week on food. To charge that amount a day is stunning.

‘They say they care about our well-being, but they’re charging students this much when so many people don’t get support from their parents.

‘Delivery slots aren’t always available from supermarkets, so what are people supposed to do if they don’t have friends to drop off food for them?

‘It seems like they’re doing it to make a profit. If you break it down you can probably get the items on Monday’s menu last week from Asda for less than £4.’