Sheep farmers could be better off if they abandoned their flocks and let some of their land become overgrown and return to woodland, a study claims.

Currently, many sheep farmers are reliant on Government subsidies for income and the occupation is not profitable without these payments.

But by letting farmland turn into woods, farmers would be eligible to pocket lucrative ‘credits’ afforded to landowners who allow native trees to grow.

Private companies pay out for these credits to offset their carbon emissions and meet guidelines laid out as part of the Government’s environmental prioritisation.

Sheep farmers could be better off if they abandoned their flocks and let some of their land become overgrown and return to woodland, a study claims (stock)

The study from the University of Sheffield comes as the Government shifts the post-Brexit farming payments regime away from subsidies for the amount of land farmed to paying for ‘public goods’ such as storing carbon and stopping flooding.

Livestock farming is heavily dependent on subsidies, and also generates greenhouse gas emissions, with sheep farming accounting for around one per cent of the UK’s total climate pollution, the university’s Grantham Centre for Sustainable Futures said.

But the UK, with tree cover of 8 per cent, making it one of the least densely forested countries in Europe, has a large potential for restoring and creating woodlands to help soak up carbon emissions, the study said. 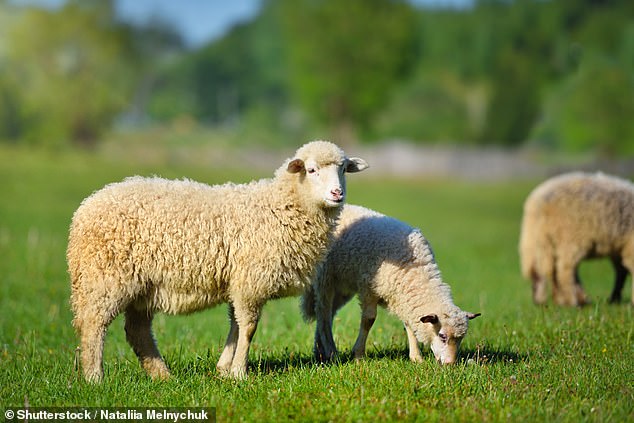 Currently, many sheep farmers are reliant on Government subsidies for income and the occupation is not profitable without these payments. But by letting farmland turn into woods, farmers would be eligible to pocket lucrative ‘credits’ (stock)

Humans have used a year’s worth of natural resources in 2020 by August 22 – a calendar event known as Earth Overshoot Day.

The annual date marks the point at which humanity has used all the biological resources that the Earth can regenerate during that year.

Due to the lockdowns imposed because of the coronavirus pandemic, and the resulting cuts in human activity, Earth Overshoot Day is 23 days later this year than it was in 2019.

But experts are warning that much more action is needed to reduce our ecological footprint and ensure we avoid ‘the direst predictions’ for humanity.

Humans currently use 60 per cent more biological resources than can be renewed – as much as if we lived on 1.6 planets – and is on track to require the resources of two planets before 2050.

It found that farmers with at least 25 hectares of land (60 acres) could turn a profit if they allowed it to naturally regenerate into woodland and were paid as little as £3 a tonne for the carbon the woods store.

The credits could be bought by businesses or individuals who want to offset their emissions, for example from flights.

If they were sold for £15 a tonne – the current market price for carbon credits – they could make forests of any size profitable, the study published in the journal Environmental Research Letters said.

Natural regeneration would work in areas close to existing woodland which would provide seeds for the land.

If farmers had to plant trees, they would need a price of around £42 per tonne of carbon stored – although Government grants in England can cover 80 per cent of costs, which makes planting profitable from £9 a tonne, the study said.

Professor Colin Osborne, from the University of Sheffield and lead author of the study, said: ‘Sheep farming in the UK is not profitable without subsidies, but forests that sell carbon credits can be economically viable – so it makes sense for the Government to help farmers transition.

‘Using public money to actively prevent reforestation in the UK and Europe is morally questionable given the pressure western governments place on the global south to end tropical deforestation.

‘Ultimately, these come down to political questions of how we want our countryside to be used, how we value livestock production over the global costs of climate breakdown, and how the Government supports farmers and rural communities.’

‘Firstly sheep farming is more than just a business, it is part of our culture and heritage and farmers get huge pride and satisfaction from farming sheep,’ he said.

Secondly, land management had to be looked at on a multi-functional basis, he said, adding: ‘Sheep farmers are managing one of our most precious resources – grassland – while also producing a fantastic and nutritious food from it.’

He said grassland stored carbon and supported wildlife, and sheep farming was at the heart of rural communities that the public benefited from when they came to the countryside.