The last time inflation was this high at 9.4 per cent, Bucks Fizz and Adam Ant were riding high in the pop charts some 40 years ago.

The fact that it was so long ago explains why many investment managers and private investors are scrambling to identify which companies are best placed to cope.

‘Knowing which businesses are going to fare best in an era of high inflation is a difficult question to answer,’ admits Ben Yearsley, investment director of Shore Financial Planning in Plymouth, Devon.

It is the understatement of the year when he adds: ‘Inflation and the possibility of recession is far from ideal when it comes to stock market investing.’

New growth: Many investment managers and private investors are scrambling to identify which companies are best placed to cope with inflation hike

How to identify some resilient stocks

Laith Khalaf, head of analysis at wealth manager AJ Bell, has some words of comfort for worried investors.

He says: ‘Although the UK economy looks likely it is heading for recession, investors can take some consolation, that the Bank of England’s doom-laden economic forecast, announced ten days ago when it pushed up interest rates to 1.75 per cent, barely caused a ripple on the UK stock market.

‘That’s because the market had already anticipated a poor economic outlook and marked down share prices.’

So far this year, despite a series of interest rate hikes, ever-rising energy bills and a challenging economic backdrop, the UK stock market has held up remarkably well.

The FTSE100 index of leading UK-listed companies has trodden water – up 0.03 per cent – since the start of the year, while the FTSE All-Share is down 2.9 per cent.

David Coombs is head of multi-asset investments at wealth manager Rathbones. He says the companies best suited to coping with inflation are those that have low levels of debt and generate lots of cash flow.

He also likes companies that either provide a premium quality service or product, or make consumer staples – food and drink, the last items to be cut from the household budget.

He adds: ‘Our objective as fund managers is to try to identify companies that possess most of these characteristics. Yet it is a more subjective process than you might think – and it changes over time.

‘Typically, we think of Heinz Ketchup, Colgate toothpaste and Shredded Wheat as staples. But in today’s world, consumer staples include the likes of Google, mobile phone contracts, broadband and possibly Amazon Prime.’

He adds: ‘The success of low-cost retailers such as Lidl, Aldi, B&M, Dollar General and Poundworld are a major threat to the staples of the past 20 years.’

Stuart Gray is co-manager of £2.9billion global investment trust Alliance. More than half of its assets are in the US. Yet its performance has held up well.

Over the past year, it has generated an overall loss of 0.3 per cent and over the past five years produced a return of nearly 50 per cent. Reassuringly for investors, it continues to deliver a growing dividend through thick and thin.

Only one rival trust, City of London, has a longer dividend growth record – 56 years compared with Alliance’s 55.

Gray argues that ‘diversified stock selection’ is a good way to weather a variety of market environments, including an inflationary one.

Like Coombs, he is attracted to companies that are not weighed down by too much debt and do not require a lot of capital to grow their business and revenues.

He says software provider Intuit, listed in the US, is a prime example. He also prefers companies that have pricing power because of having a loyal customer base, such as US aerospace components manufacturer TransDigm, or have the ability to charge a fee based on the price of goods sold, such as US financial company Visa.

Its revenues, he argues, should increase as prices rise in an inflationary environment.

He adds: ‘Companies that have fundamental strengths such as these are well placed to weather the current inflationary environment and grow in value over the long term.’

Shore’s Ben Yearsley says another good way for investors to build resilience into their portfolios is having exposure to investment funds that seek to protect the ‘real’ value of investors’ capital over the medium term. They tend to do this by investing across a range of assets, not just equities.

Investment trusts set up to do this include Personal Assets, Capital Gearing and RIT Capital Partners.

For example, Personal Assets, managed by Troy Asset Management, has generated returns in excess of inflation – and the FTSE All-Share Index – over the past three and five years.

Over the past year, returns have failed to keep pace with inflation, but the trust’s investment objectives emphasise that beating inflation is a long-term objective – not a short-term one.

The current portfolio comprises a mix of exposure to gold (12 per cent), index-linked bonds (35 per cent), and equities (quality brands such as Microsoft, Visa, Unilever and drinks giant Diageo). 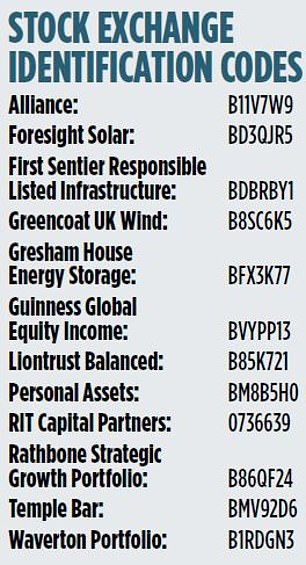 A number of multi-asset funds adopt the same kind of approach as Personal Assets, investing across bonds, gold and equities.

For example, Rathbone Strategic Growth Portfolio, managed by Coombs, also invests in gold and bonds as well as quality companies such as Alphabet, Amazon and Mastercard.

Over the past five years, it has generated returns of 28 per cent. Similar funds include Liontrust Balanced and Waverton Portfolio.

Yearsley also says investors should run a rule over Lazard Thematic Inflation Opportunities, a recently launched fund that invests in companies which the managers think will thrive in an inflationary environment.

Its portfolio is again skewed towards consumer staples companies. Among its top holdings are Costco, as well as energy companies Shell and Equinor. The fund will soon be available to buy via leading wealth platforms.

Trusts investing in infrastructure projects – where revenues are linked to inflation – and renewable energy are also worth considering.

These include First Sentier Responsible Listed Infrastructure – of which Yearsley is a fan – Foresight Solar and Greencoat UK Wind.

He says: ‘Energy storage will help the UK to decarbonise as more renewable energies come on to the grid. The trust continues to be the market leader for battery storage in the UK, with around a 30 per cent market share.

‘It has performed strongly, as a beneficiary of high-power price volatility and strong operational performance.’

For the year to date, its share price is up 26 per cent.

Another tactic in uncertain times is to target income-friendly investment funds.

Adrian Lowery, of wealth manager Evelyn Partners, says: ‘Income provides investors with a comfort blanket when the value of their shares is going nowhere, or even falling.’ Funds worth looking at, he says, include Guinness Global Equity Income and Temple Bar.