By Luke Barr For The Daily Mail

Shares in CareTech soared after it backed an £870million takeover offer from its founders.

The social care provider’s board agreed to a 750p a share offer from brothers Farouq and Haroon Sheikh, who are executive chairman and chief executive respectively.

Offer: CareTech soared after it backed an £870m takeover bid from its founders Farouq and Haroon Sheikh, who are executive chairman and chief executive respectively

Isle of Man-based hedge fund Dbay Advisors was also in the running for CareTech but pulled out of the race yesterday.

Founded in 1993, CareTech is one of the UK’s biggest social care providers and runs hundreds of residential homes and specialist schools across the country for adults and children with complex needs.

Farouq Sheikh said the deal was a win-win for all involved.

He said: ‘Shareholders will receive immediate value in the form of a significant premium to the share price before the offer was announced or the ability to co-invest with us for the long term.’

It has paid out £83.6million in dividends in that period, and seen its shares jump from 160p. For the six months to March, CareTech recorded a modest revenue rise of 2.6 per cent, while pre-tax profits more than halved to £19.2million. 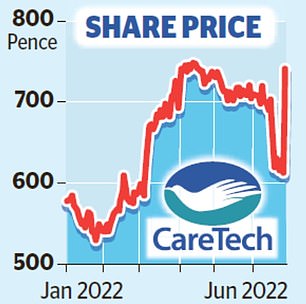 The Sheikhs insist private ownership will allow further growth and fuel the company’s expansion plans in the Middle East.

They admitted the business faces potential risks from ‘inflationary pressures and wage increases’, but the firm said the cash offer gifts shareholders the chance to ‘crystallise value at an all-time share price high’.

CareTech provides services to roughly 5,000 adults and children in more than 550 residential facilities and specialist schools. It employs more than 11,050 staff.

The deal, which is expected to become effective in the third quarter of this year, is being financed by £258million worth of debt provided by investment house THCP Advisory.

CareTech has expanded through a string of acquisitions in recent years, including bolt-ons in the United Arab Emirates.