Shania Twain detailed suffering horrific childhood sexual abuse by her stepfather in an emotional interview on the Today Show in New York City on Thursday.

The 57-year-old You’re Still The One singer – who is promoting her album Queen Of Me – first claimed she had been abused in 2018 by her stepfather Jerry Twain.

On the show, Shania talked to Hoda Kotb about how being fondled as a child by her stepfather made her embarrassed of her body.

Now the iconic singer says she is trying to embrace her body which is why she posed nude for the album cover. ‘I’m the boss of me,’ she said.

Shania did not know her biological father. Her stepfather Jerry and her mother Sharon died in a car crash in 1987.

When asked what her album title meant to her, the That Don’t Impress Me Much singer said: ‘It means taking responsibility, ownership, of yourself.’

During the sit down she also said she went with nude photography for her album cover as a way to deal with the horrible things her stepfather put her through when she was a child.

‘It’s really about saying I was abused as a kid,’ she said. ‘My stepfather would fondle me up on the top and make me go without a shirt and I was already maturing. This cringy horrible wanting to escape being in my own skin.’ 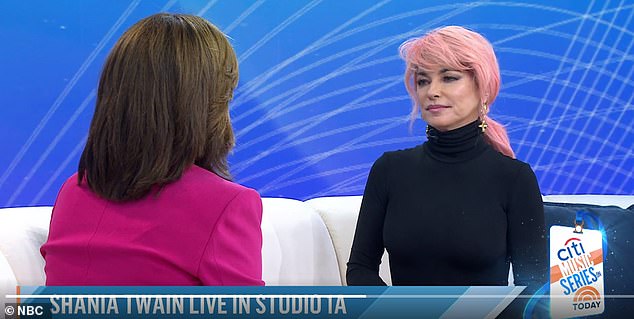 A Queen: On the show, Shania sat down with Hoda Kotb and talked about her upcoming album Queen Of Me and how growing up in a violent home changed her life

She continued: ‘It’s time to start loving myself in my own skin and really embracing that and not being embarrassed of it or shy of it. This is who I am.’

Twain also said, ‘Loving who you are. I’m my own royalty. I’m the boss of me, and I’m responsible for the decisions I make, for what I say, for what I do. It’s a statement of self-confidence that I’ve grown into more over the last few years.’

The five-time Grammy winner then continued to reflect on the idea of finding self-confidence at this stage in her life and how ‘it’s more essential than ever.’

For her new album, she did a photoshoot in which she decided to go ‘full monty.’ 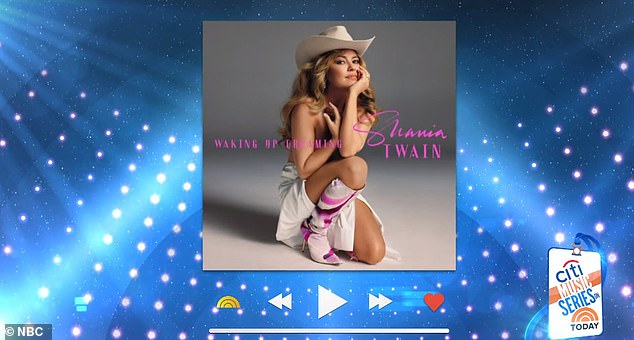 Loving herself: She did a nude photoshoot for her album artwork and shared candidly how she doesn’t love her body but that she wanted to put fear aside and do it anyway 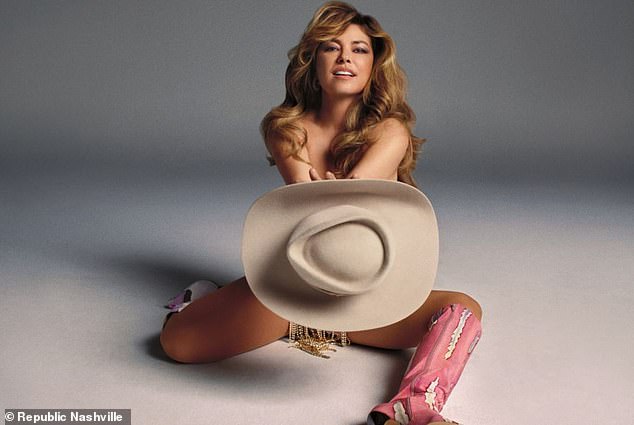 Cool cowgirl: Shania talked about moving on from the hardships of her past and finally loving herself in her own skin 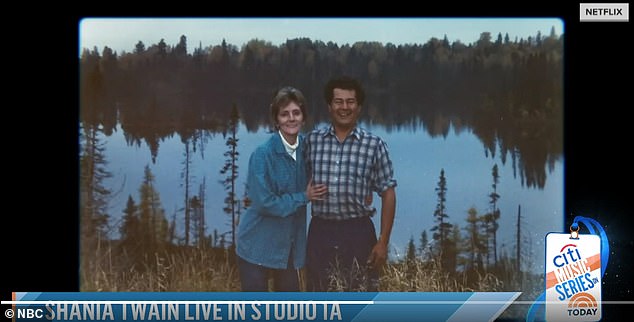 Tragedy: The star first claimed that she was abused by her stepfather Jerry Twain in 2018

‘I did a whole shoot as part of the album artwork where I’m completely nude and it was really scary, but it was sort of like, you know, I don’t really love my body.

‘I don’t love looking at myself in the mirror with the lights on or looking at the mirror at all at my body. So I said listen, I’m gonna face that fear.’

Shania explained that she wanted to ‘put fashion aside’ so that she could be her full authentic self. 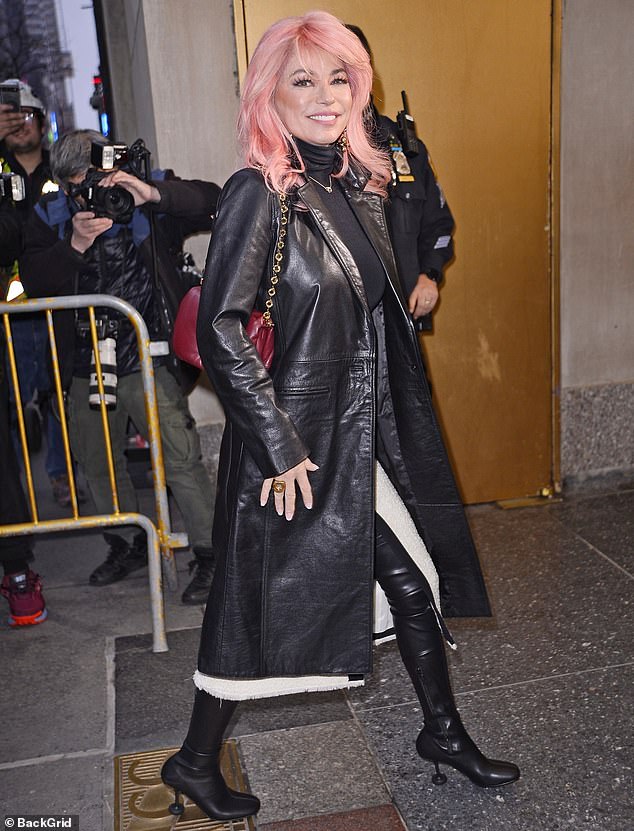 New hair: Twain was a guest on the Today Show in NYC and sported a new bright pink hairstyle

The conversation then shifted to discuss Shania growing up in a violent home in her documentary Not Just a Girl, which came out in July 2022.

The Man! I Feel Like A Woman! singer grew up in a home where there was not always food or electricity. She lost her parents when she was in her 20s and she then had to become the mother figure to her siblings.

The beauty talked about how those hardships shaped her into who she is today and described it as being ‘like a double edged sword.’ 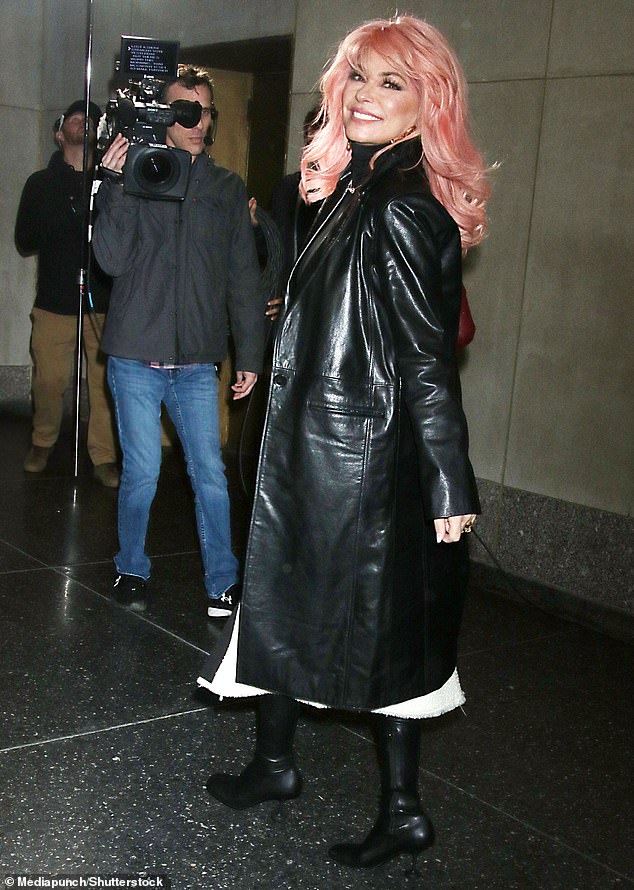 Leather moment: The 57-year-old wore a black turtleneck tucked into a black and white sherpa skirt with a slight slit up the side

She said: ‘There’s elements of that, of going through all those difficulties that make you stronger. What you survive makes you stronger, but on the other hand you develop insecurities.’

Shania talked about how as a songwriter she writes about and imagines the future and how she rarely reflects on the past in her songs.

She looked incredible in NYC on her way to the show.

Over her clothes, she had on a long leather jacket that went down to her knees. She also had on a pair of tall leather-heeled boots.

Back in 2018 the singer spoke about being sexually abused she said: ‘Uh huh, uh huh. I’m not going to go into details about it. I don’t mind saying it, because I do think it’s important that people understand you can survive these things.’

The singer revealed that the abuse started when she was around the age of 10.

She explained: ‘I feel the sexual abuse goes hand in hand with the physical and psychological abuse when it’s somebody you know. I learned to block it out.

‘Abusers need to manipulate you, whether it’s before or after, and what I said to myself is: “OK, there’s something wrong with this person and that person is not well.”‘ 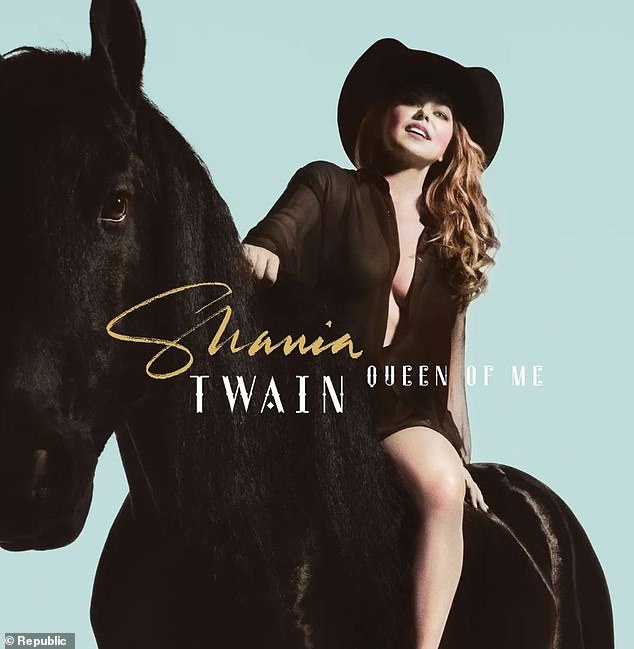 Brunette beauty: The five-time Grammy winner’s album Queen of Me will be released on February 3, 2023