A suspended nurse directed yobs to confront riot police before violence broke out at a mass rally of coronavirus-deniers yesterday.

The 54-year-old, who was in charge of the microphone at the event, repeatedly urged male demonstrators to confront groups of police officers in the square.

During increasingly ugly scenes a Mail on Sunday photographer was surrounded by a group of screaming protesters and had his face mask ripped off.

At 4pm around 60 riot police stormed towards the stage in front of the National Gallery after judging that the demonstration, which had attracted more than 2,000 protesters, was a risk to public health.

Bottles and beer cans were thrown as the officers attempted to break up the rally and arrest the organisers. They were supported by ten police horses and a unit of police dogs.

Thirty-two people were arrested and two officers suffered minor injuries. Superintendent Emma Richards said: The amount of hostility shown towards officers, who were simply there to keep people safe, is unacceptable.’

It was last night unclear whether Shemirani was among those detained. The violent clashes – the first at an anti-lockdown protest – will fuel fears of further disorder and violence should Britain enter a second national lockdown.

The so-called ‘Resist and Act’ rally was organised as a protest against Government measures to tackle the pandemic, with many there claiming that coronavirus is a ‘scam’ or that potential vaccines will be dangerous.

It included conspiracy theorists, anti-vaxxers and 5G protesters, along with groups of yobs apparently determined to clash with police. 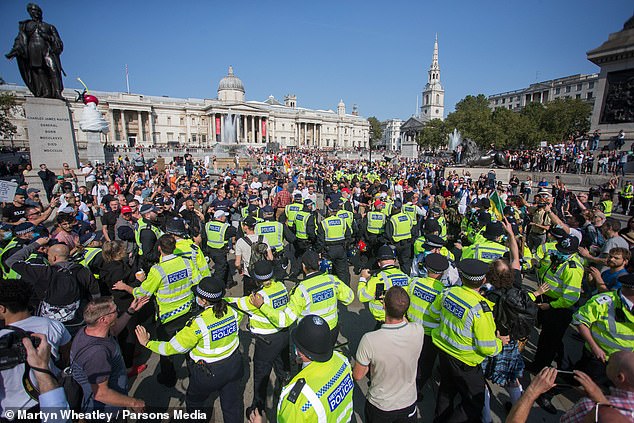 The demonstration at London’s Trafalgar Square yesterday attracted more than 2,000 protesters and was judged a risk to public health 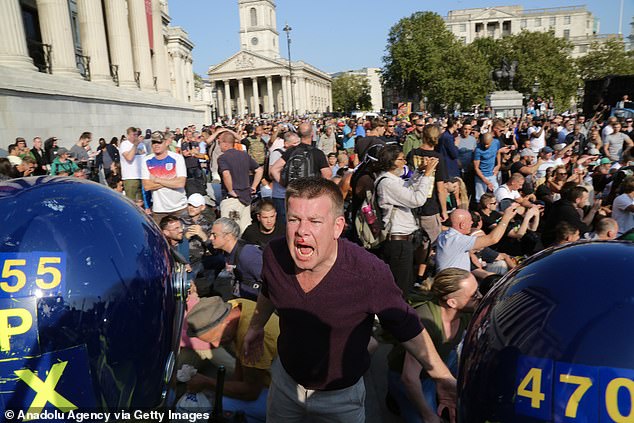 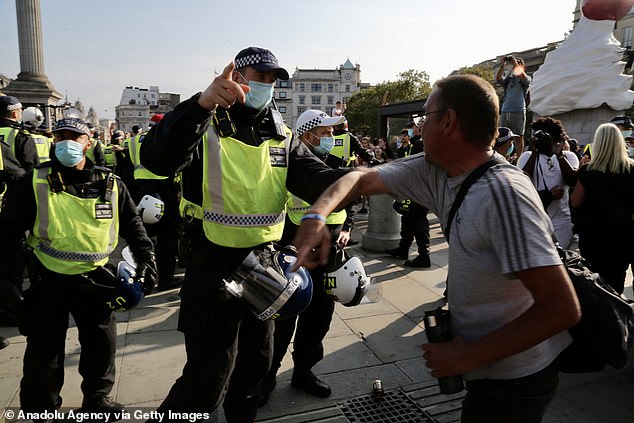 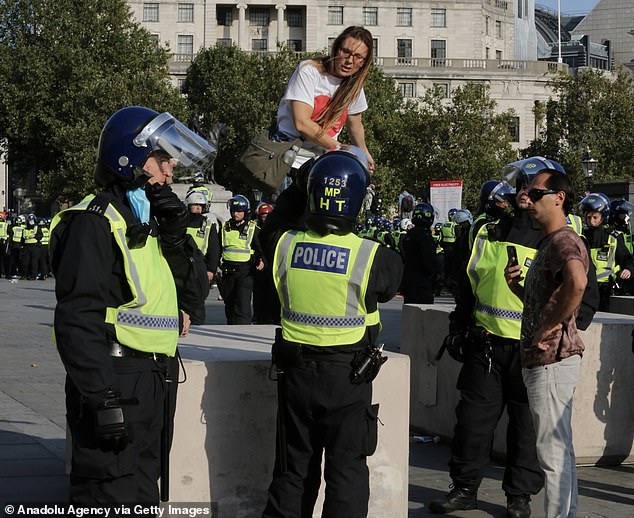 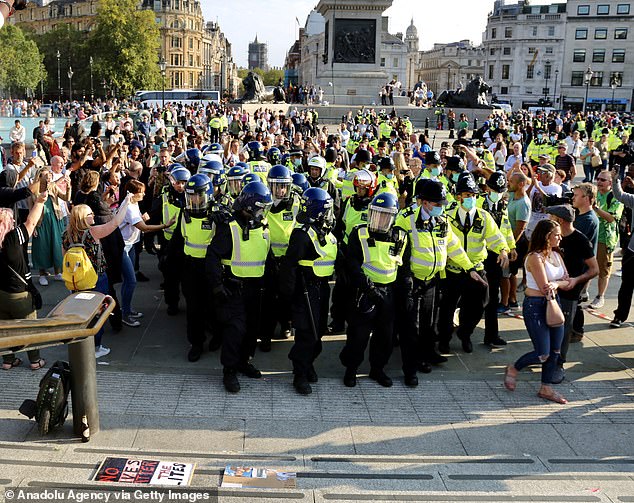 At 4pm around 60 riot police stormed towards the stage in front of the National Gallery after judging that the demonstration, which had attracted more than 2,000 protesters, was a risk to public health.

Speakers included Mohammad Iqbal Adil, an NHS consultant surgeon who was struck off for a year in June for posting videos on social media claiming that the pandemic has been orchestrated by the elite to control the world.

Disgraced former doctor Andrew Wakefield recorded a message for the rally from the US, where he has promoted conspiracy theories about the coronavirus pandemic and is in a relationship with supermodel Elle Macpherson.

Only minutes into the rally, Shemirani introduced security guards standing near the stage who she described as ‘showmen travellers’ and ‘boxers’.

She claimed a group of military veterans had escorted her to the square ‘covertly’. She then whipped up the crowd, leading a chant of ‘choose your side’ at officers.

As police apparently moved closer to the back of the stage she directed men in the crowd to stop them.

‘Men get around the back now. Come on guys we need you. We need guys this side, the police are surrounding us.’ 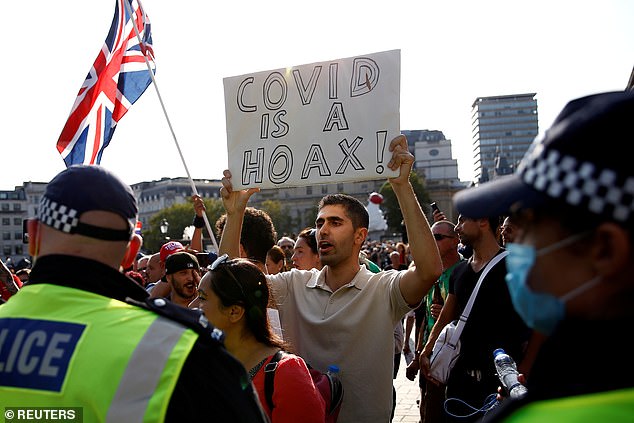 A protester holds a sign which says ‘Covid is a hoax!’ during the demonstration at Trafalgar Square 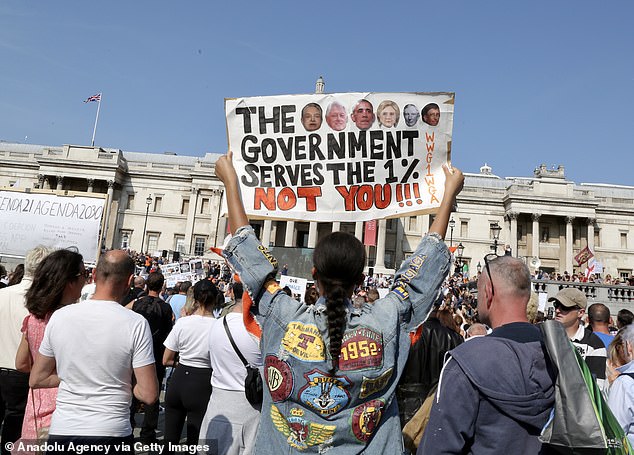 Demonstrators gather at Trafalgar Square, with one holding a sign which says ‘The Government serves the 1% not you’ 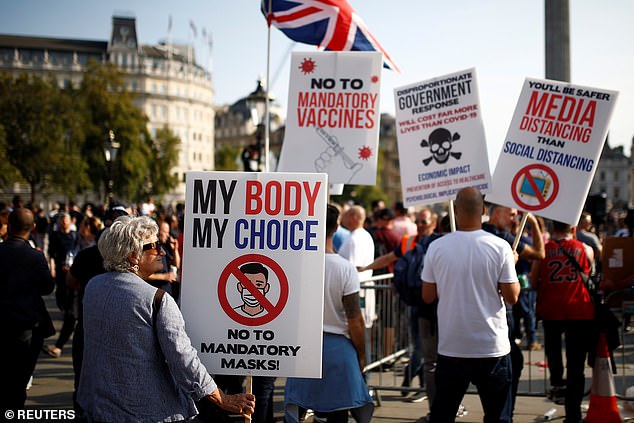 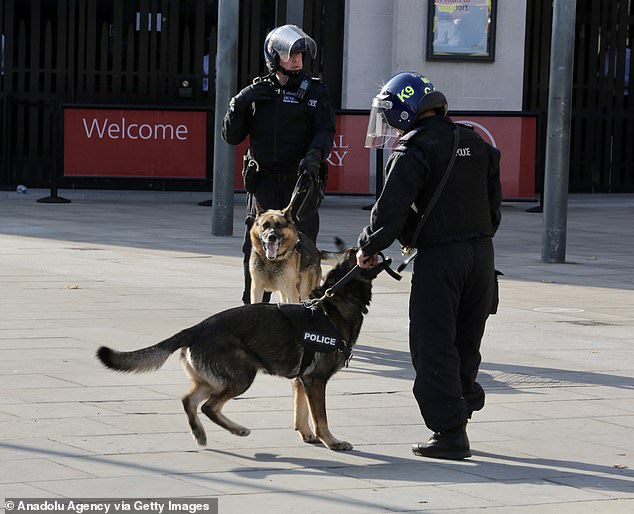 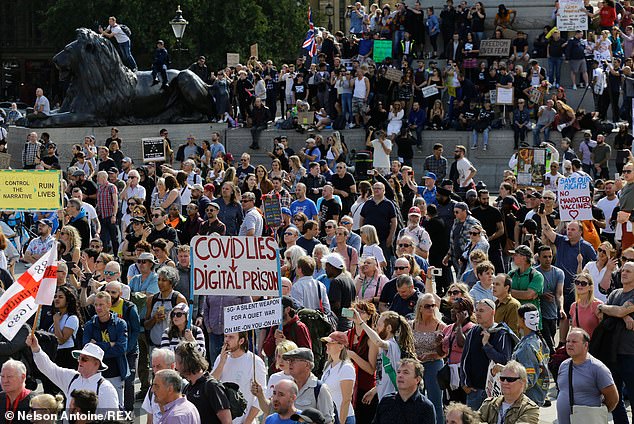 The protest was deemed a risk to public health after it attracted more than 2,000 people to London’s Trafalgar Square 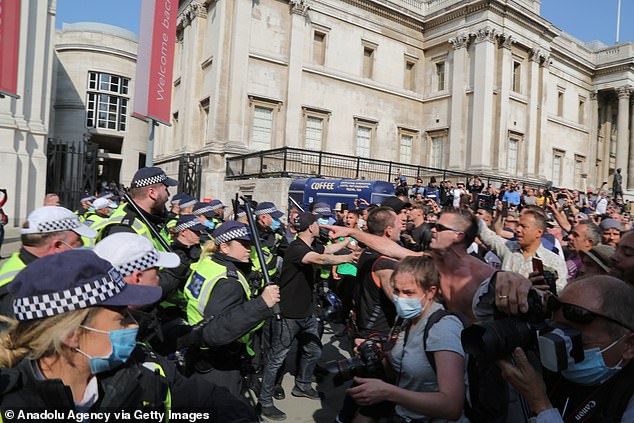 She later said: ‘We’ve got some Old Bill coming over here, so we want some guys over here. They are flanking us on the left. You dirty dogs.’

After her comments, groups of male protesters and security guards wearing tabards could be seen rushing towards the police.

During a series of absurd rants, she claimed police officers would be ‘first in line’ for a vaccine that would make them ‘trans-human.’

‘Scientists are terrified, it changes you forever,’ she screamed. ‘You are no longer human, you are trans-human. They can put a patent on your ass and they can kill you and it won’t be genocide.’

She also directed the crowd to turn around to face officers standing at the back of the square, all of whom were wearing face masks. 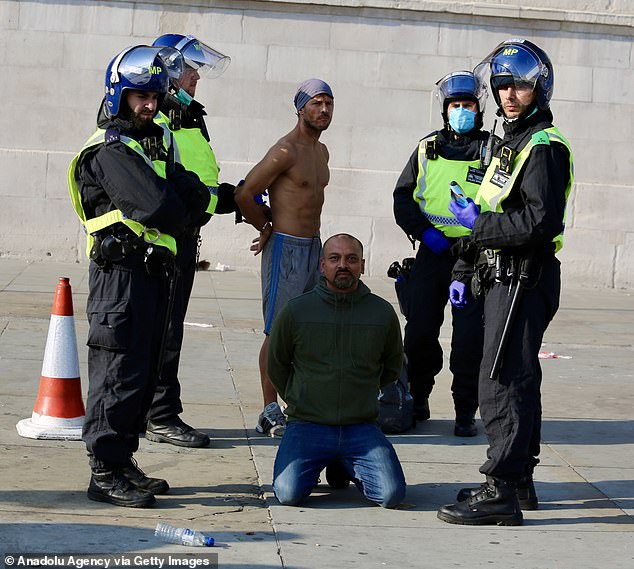 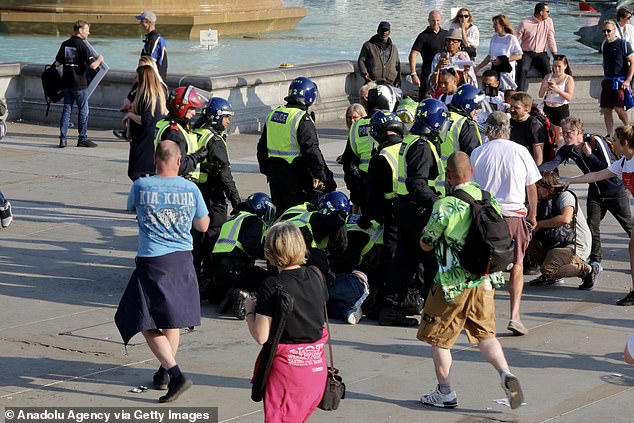 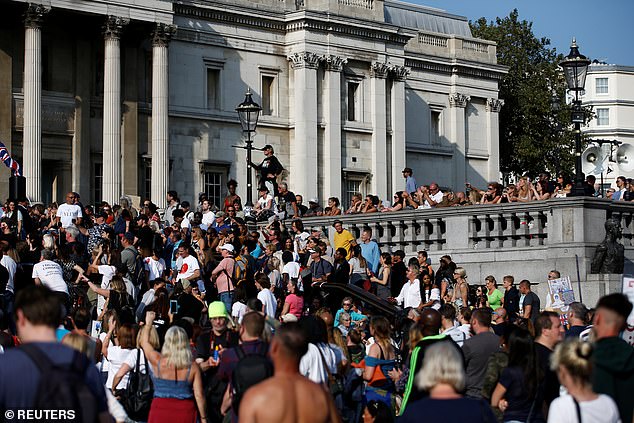 ‘Get your gob rags off,’ she shouted. ‘You look ridiculous. You’ve got a nappy over your mouth.’

At 2.55pm Scotland Yard issued a statement saying officers had attempted to ‘encourage’ the protesters to leave but that they remained and were putting themselves and others at risk.

‘This, coupled with pockets of hostility and outbreaks of violence towards officers, means we will now be taking enforcement action to disperse those who remain in the area,’ the statement added. ‘Those who remain may get arrested.’

An hour later, police in riot gear charged and formed a cordon around the protesters near the stage. Scuffles broke out as officers made a series of arrests but after a half-hour stand-off the crowd dispersed. 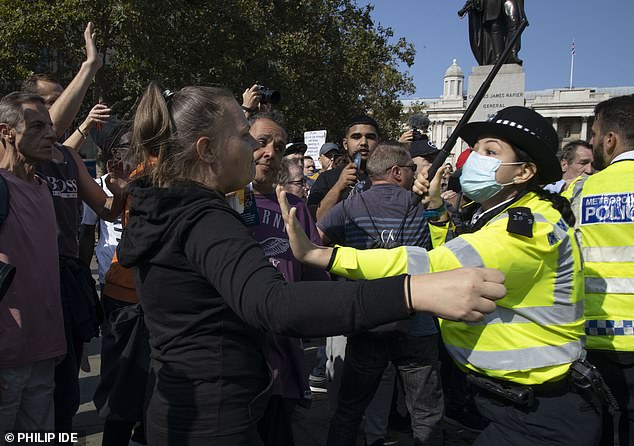 At 2.55pm Scotland Yard issued a statement saying officers had attempted to ‘encourage’ the protesters to leave but that they remained and were putting themselves and others at risk

Before the raid, protesters had brandished a baffling series of placards, including one that warned of a ‘masonic lockdown in your home town’ and another which said ‘Jesus was an anarchist’.

‘The masks silence us and erode our personalities,’ she told the MoS.

Yvonne Dietz, 45, a yoga teacher and mother-of-five, nervously glanced down at a device that she said was measuring radiation levels.

‘We are being bombarded with radiation,’ she said. ‘I can actually feel it. I can feel heart palpitations.’