EXPRESS INFORMER > News & Politics > Sex worker, 19, admits she sometimes has as little as 5 MINUTES to clean up in between clients

An escort has offered a closer look at her occupation in a new documentary on sex work by Channel 5.

Ellie, 19, from Nottingham, said she’s close to earning six figures per year thanks to her sex work during a segment on Adults Only: S******* 9 to 5,’ airing tonight at 10pm on Channel 5.

The sex worker, who has been in the business for three years, was seen on the show waiting for clients in a Manchester hotel room she had booked for her ‘weekend of work.’

Ellie explained that sometimes demand is so high that she’s left with very little time between 15-minute appointments, which she charges £70 for.

The sex worker supplements her income with an Only Fans account, where she charges for raunchy shaps of herself, earning up to £4,000 a month from her 500 subscribers

The sex worker, who booked her clients in online as soon as she set foot in Manchester, said she was expecting a busy night, having already received two bookings.

Speaking to the camera waiting for her first client, she said: ‘Obviously my first client has me fresh, with my make-up and my hair done, but once my first client’s gone I have to keep it up.

‘I have to have a shower, have an outfit change.’

‘Sometime it is literally like five minutes – two to five minutes – sometimes I have 30 minutes, it all depends on what people’s booked in,’ she went on. 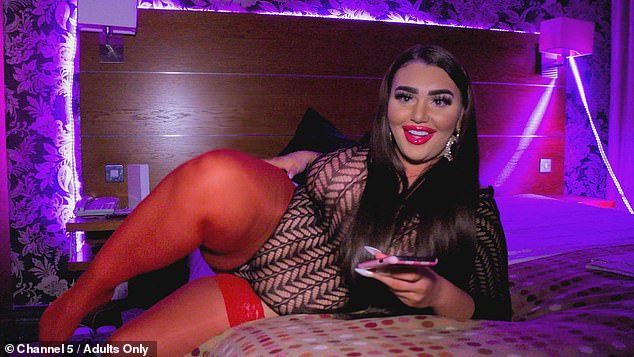 The escort said she makes nearly six figures per year thanks to her sex work, and can earn as much as £1,500 a night

On the night the camera crew accompanied her to the hotel, she revealed a client had paid her £150 for 15 minutes but had only stayed for ten, leaving her with extra time to prepare and relax before the next client.

On top of maintaining her image in between sessions, Ellie – who still lives at home with her parents – said working in a hotel can present challenges.

She explained she has to be very particular about which hotels she picks, because many have measures in place to stop sex workers operating out of their rooms.

‘I have to look up for hotels that don’t have key card system so you can just go straight in the lift straight up to the room without a keycard,’ she said.

‘Most hotels are on it now. They are using key card systems to keep escorts working from hotel rooms.’

And she added that it’s very important that the hotel doors have peepholes so that she can check who is knocking on her door before opening it. 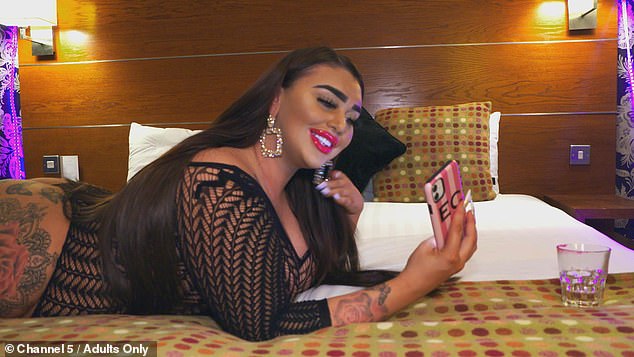 Ellie said her safety is paramount, which is tricky in hotel rooms which don’t have peepholes where she can check who is knocking on the door

‘If you got like peephole, you can actually see the client that’s knocking on your door before you actually open that door,’ she said. ‘For me, that door is like a safety.’

The teenager was dismayed to find the room she had booked for her weekend had no peephole, meaning she would have to open the door directly.

In the first instalment of the Channel 5 series, it was revealed that Ellie still lives at home with her parents in Nottingham, which is why she has to see her clients in hotels.

She explained she could make £1,500 a night of work, and sometimes travels to London and Manchester to find a bigger pool of clientele.

In spite of being only 19, she admitted to working in the sex industry for the past three years.

On top of her sex work, Ellie explained she caters to her fanbase online with a OnlyFans account, making as much as £4,000 a month from her 500 subscribers.