A sex trafficking survivor serving life in an Ohio prison for murder is set to be released after Kim Kardashian campaigned for her freedom.

Ohio Gov Mike DeWine on Friday commuted the sentence of Alexis Martin, who was 15 years old when she was convicted of plotting a robbery that resulted in the death of the man who trafficked her.

Martin, now 22 and five years into her life sentence, wrote to Kardashian pleading for help after the reality star helped secure the release of another inmate, Alice Marie Johnson, in 2018.

Kardashian, a fierce advocate for prison reform, drew attention to Martin’s case by featuring her in her documentary ‘Kim Kardashian: The Justice Project’, which aired on Oxygen earlier this month.

Alexis Martin was sentenced to life in an Ohio prison for murdering her sex trafficker when she was 15 years old. The 22-year-old (pictured) was granted clemency on Friday, weeks after Kim Kardashian featured her case on her documentary: ‘Kim Kardashian: The Justice Project’ 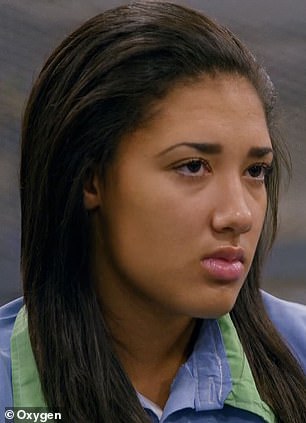 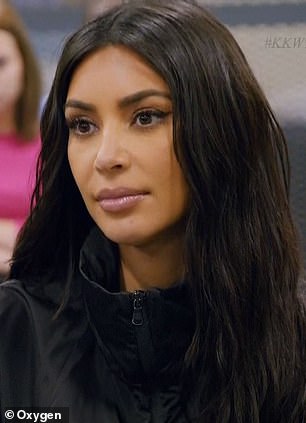 In the Kardashian documentary, which aired earlier this month on Oxygen, Martin describes how she ended up behind bars for the murder of her pimp in November 2013, when she was 15

Less than two weeks later, Martin’s prayers were answered as DeWine announced that she was among the seven inmates for whom he would grant clemency amid the coronavirus pandemic.

‘The facts of her case are particularly, particularly unique,’ the governor said, noting that Martin would be released to supervision at a group home.

Kardashian applauded the news on Twitter, writing: ‘Alexis Martin is a sex traffic survivor and I was honored to be able to share her story on the Justice Project.

‘Thank you Governor DeWine for commuting her sentence. @GovMikeDeWine.’

Lawyers who have been working to free Martin for the past two years also praised the decision.

‘This is a brilliant young person who gets to live her life,’ said Sasha Naiman, a lawyer for the nonprofit Ohio Justice & Policy Center who campaigned for Martin’s release alongside Jennifer Kinsley, a private lawyer working pro bono. 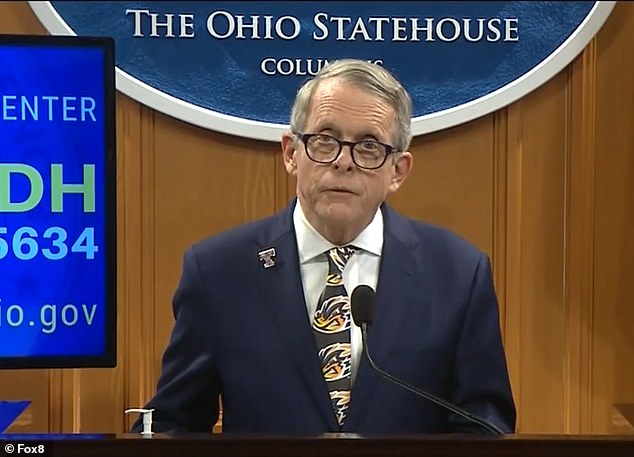 DeWine on Friday announced that he was granting clemency to Martin and six other inmates, due in part to the coronavirus crisis

Kardashian applauded the news about Martin’s release on Twitter

Martin explained her case to Kardashian during a meeting depicted in the Oxygen documentary.

She described how she was arrested at age 15 for aggravated murder for allegedly killing her pimp after suffering from years of sexual abuse beginning when she was nine.

Martin was born in Akron, Ohio, to parents with serious substance abuse issues. Her mother lost custody of Martin and her siblings several times while being jailed for drug trafficking.

Kardashian listened intently as Martin told how she did odd jobs at aged 11 to help pay the bills and then was molested by her mother’s husband.

She revealed that she was raped four times starting at age nine – and that one attacker who raped her from ages nine to eleven was found not guilty despite semen being found in her panties.

‘That breaks my heart, people shouldn’t have to go through that. You called out for help from the authorities and people who could’ve protected you and they didn’t,’ Kardashian said after hearing the harrowing details. 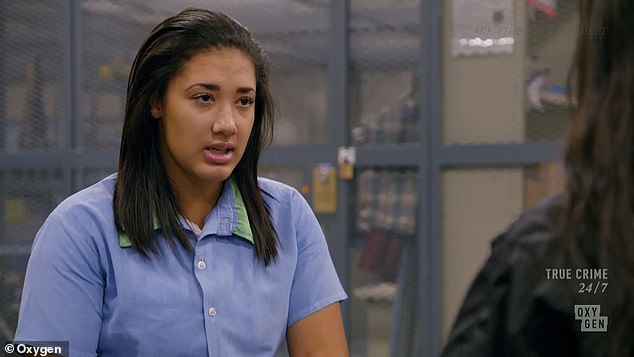 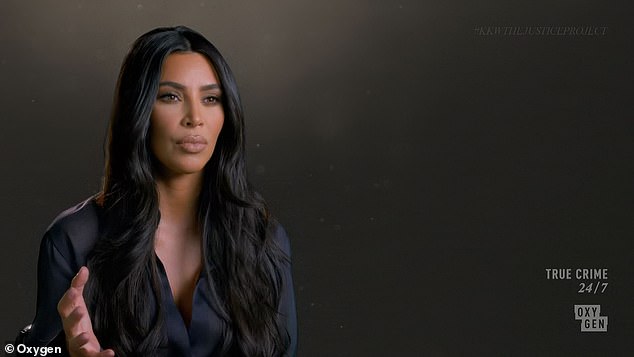 Martin then recounted how she got mixed up with drug dealer Angelo Kerney – who she claims raped her and began sex trafficking her when she was 14.

She said Kerney asked her to carry his drugs and guns from state to state while also renting her out to clients.

‘I did like weird jobs that paid a lot. This guy came and he wanted me to wear a Hannah Montana nightgown with two pigtails. And while he had sex with me I was supposed to push him and scratch him and tell him, ”Oww daddy, you’re hurting me”,’ Martin said.

She said that when she refused sex work that Kerney would beat her and threaten to traffick her little sister.

In November 2013, Martin hatched a plan to rob Kerney at his home so she could get away from him.

She was in another room having sex with Kerney’s brother, Alecio Samuel, when two of her accomplices, Travaski Jackson and Deshaun Spear, broke into the house and shot both brothers, killing Kerney and wounding Samuel. 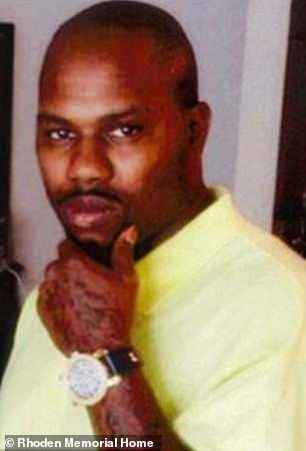 Martin was convicted of murder in the death of Angelo Kerney (pictured), whom she claimed raped her and began sex trafficking her when she was 14

Martin’s mother, Crystal Bowers, spoke in the Oxygen documentary about the moment she received a call from a detective who said her daughter was wanted for murder.

The mother said she blamed Kerney for leading her daughter to the lifestyle that ended with her in prison.

Prosecutors pushed to have Martin tried as an adult, despite her age and the circumstances that surrounded the crime.

She ultimately accepted a plea deal that included a life sentence with parole eligibility after 21 years.

Attorney Jennifer Kinsley, who took up Martin’s case in 2018, also spoke in the documentary, revealing that the teen ‘literally had nobody’ when they first met.

Kinsley and a team of lawyers sought an appeal under a safe harbor law designed to help victims of sex trafficking.

When Kardashian caught wind of their efforts, she offered to help with Martin’s upcoming clemency hearing and to write a letter to the parole board.

In the documentary she said she felt it was ‘extremely important’ for a judge to consider the circumstances that lead a person to commit a crime.

She also said she was touched by the efforts Martin has made to better herself behind bars – including mentoring other women who were sexual trafficking survivors and obtaining her GED.

‘Every time I’ve brought up a sex trafficking case, there always seems to be some huge hurdle because there’s no law in place that protects these children,’ Kardashian said.

‘The system will take on the case and try them as adults, and to me, that is so broken … no one is protecting them.’ 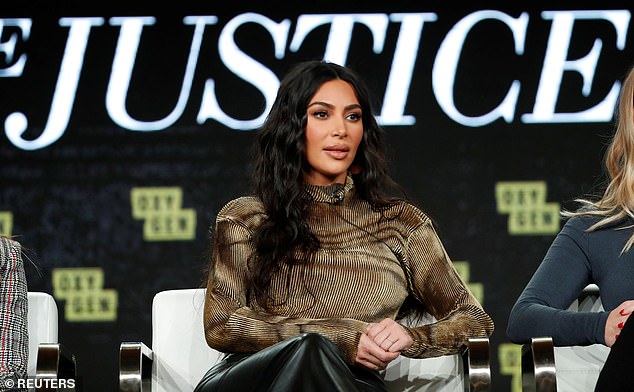 Martin is one of nearly two dozen inmates Kardashian has helped release in the past two years. The socialite is seen at a press event for Kim Kardashian West: The Justice Project’ in January

Martin is one of nearly two dozen inmates Kardashian has helped gain freedom.

Her foray into criminal justice reform began in 2018 when she petitioned President Donald Trump about Alice Marie Johnson, a 63-year-old grandmother who served 21 years in a Tennessee prison for a non-violent drug offense.

Since then Kardashian has been involved in a number of release campaigns, including for former sex slave Cyntoia Brown and nonviolent drug offender Jeffrey Stringer.