Tamoy Bailey (pictured above), 18, assaulted the victim at his grandfather’s apartment in southeast London on 31 March last year

A sex attacker who sent laughing emojis to his friends after raping a woman while threatening her with a ‘Rambo’ knife in his grandfather’s flat has been jailed for seven years.

Tamoy Bailey, 18, assaulted the victim at his grandfather’s apartment in southeast London after meeting up to ‘smoke some weed.’

Inner London Crown Court heard how he grabbed her to pull her into the bathroom while threatening her with a ‘Rambo’ blade on 31 March last year.

He ordered her to take her trousers off and raped her, sneering ‘do I look like I care?’ as the woman pleaded for him to stop, jurors heard.

The teenager asked if she was a ‘snitch’ as she was curled on the bathroom floor crying. He then sneered as he sent laughing emojis to his friends on his mobile phone.

‘When he sat down on the toilet I just saw him writing laughing messages, I just put my head back on the floor,’ the victim said.

‘I think he was on the phone booking a cab. He was sitting on the toilet. All I could see was his laughing faces but I was crying, so I just put my head on the floor.

‘He said let me know if you’re gonna snitch now because I can f*** off to Hastings.’

Bailey, of New Maldon, Surrey, denied but was convicted of rape and false imprisonment by a jury.

The sex attacker can now be named for the first time after he turned 18 following his conviction.

He was previously convicted of ‘using threatening words or behaviour’ three times between August 2018 and May 2019 and sentenced to a ‘referral order’ by a youth court each time.

He was also handed a supervision order last year for threatening to stab a 13-year-old and slapping him during a robbery carried out just hours after the rape attack.

Bailey also has convictions for affray, ABH and three robberies, the court heard.

Nneka Akudolu, prosecuting, said: ‘He was 16 at the time of the offending and now is 18 at the time of sentence. He is a young man who does have a record for offending of serious specified offences.’

Bailey had said ‘do you want to die tonight?’ at the girl before he demanded she be recorded saying ‘I consent’ so he could use it as evidence.

The prosecutor said: ‘He had pulled down his trousers and was sitting on the toilet on his phone and refused to let her leave until she promised she wouldn’t snitch on him. 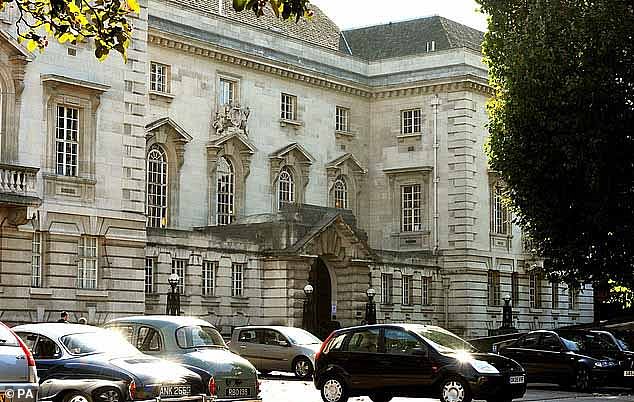 Inner London Crown Court, pictured above, heard how Bailey grabbed the victim to pull her into the bathroom while threatening her with a ‘Rambo’ blade (file photo)

‘He essentially demanded that she be recorded saying that she consented so that she couldn’t then report it to the police.’

Defending, Hanisha Patel said: ‘It was the victim that contacted the defendant at the early hours of the morning and neither of them could have known how matters would have unfolded and therefore I submit that this is not a case where there could have been a significant degree of planning.

‘This offence was an opportunist one, albeit serious. From a young age he has been exposed to negative criminal influences.’

She added: ‘That doesn’t excuse or justify any of the behaviour but it goes some way of explaining the matters on his record.’

Judge Jeremy Donne QC told Bailey: ‘You were convicted by the jury of the offences of rape and of false imprisonment both arising from the same incident on 31 March last year.

‘You victim was a little older than you. It is entirely correct to say that she contacted you in the early hours of the 31 March.

‘She spoke to you on the telephone and you suggested she join you at your address.

‘When the two of you met, the conversation turned to sexual matters. She felt uncomfortable but not sufficient enough to leave your company.

‘Once you got inside your grandfather’s house your demeanor changed dramatically, you forced her into the bathroom and demanded that she remove her clothing.

‘You produced a knife. She took a photograph to mark her location, the knife was captured on the bathroom floor.

‘It is possessed at large by young gang members known as a rambo knife, a knife that has one purpose alone to cause injury.

‘Despite her repeated pleas, your response was, “do I look as if I care?” You simply did not care about her at all, you wanted sex and you were prepared to do what was necessary to obtain it.

‘You did not let her go immediately, you were apparently texting friends of yours what you had done. It was at that stage that you were distracted and that she was able to take a photograph which gratuitously captured the knife that was on the floor.

‘You told her that you wanted to video her stating that the sex had been consensual between you, but she refused to do such a thing. She quickly made her way back to her sister’s address. Later in the afternoon of the 31 March you committed a robbery using violence to do so.’

Judge Donne added: ‘I do return to what you said when she pleaded for you not to rape her, “do I look as if I care.”‘

Bailey was sentenced to seven years detention at a Young Offenders’ Institution.