But his crime — plotting to launder hundreds of thousands of pounds of stolen money for which he was sentenced to nearly four years — was perhaps less shocking than his notorious family background.

He was born Hamza Mustafa Kamel before changing his name to Tito ibn Sheikh, which roughly translated means ‘son of a venerable man’ in Arabic.

This could not be a less appropriate title in the circumstances.

His father — the so-called ‘venerable man’ — is Abu Hamza, the infamous ‘hook-handed’ cleric of Finsbury Park mosque who is now serving life without the possibility of parole in the U.S. for terror offences there and in the UK.

Tito ibn Sheikh, as he is now, is one of Abu Hamza’s six sons.

Four of them have criminal convictions for offences including terrorism, armed robbery, drug dealing, fraud and burglary, and the remaining two have a track record of Islamic extremism.

Every one of them, in other words, has been a blight on this country.

Between them — and a seventh stepbrother — they have collectively chalked up 40 years in British jails and, along with Abu Hamza, have cost the British taxpayer millions in legal aid, benefits, healthcare and prison stays.

Could there be a more toxic family anywhere in the country, or anyone who has exploited the system more ruthlessly than the Hamzas? 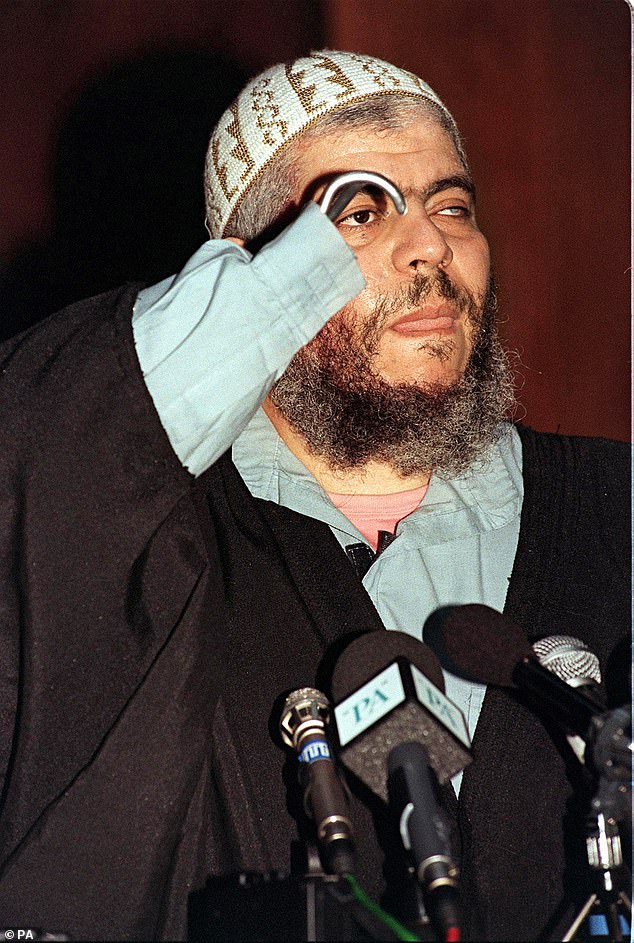 Hate preacher Abu Hamza. In 1979 he arrived in Britain from Egypt and was given indefinite leave to stay after marrying a British woman

This is the real scandal behind the latest conviction of 35-year-old Tito ibn Sheikh.

The money laundering scheme involved opening bank accounts with false identities — with the help of a corrupt HSBC official — to ‘wash’ £342,000 of ‘dirty money’ made through thefts and fraud.

At the time, Tito ibn Sheikh was on licence following his release from a 12-year prison term for leading a gang who kidnapped a man and tortured him over a £15,000 debt almost a decade ago.

The victim was knifed, battered with a metal bar and wooden cosh and nearly strangled to death.

‘His neck was squeezed so hard he thought his tongue would pop out,’ is how the prosecution described a particularly brutal aspect of his three-day ordeal.

Tito ibn Sheikh was also jailed for two-and-a-half years in 2009 for being part of a gang which stole 32 luxury cars worth more than £1 million.

He wore his hair in a ponytail and was dressed in a green prison tracksuit when he appeared in court again this week.

His barrister said that his client had changed his name to distance himself from his father.

‘His father has a degree of notoriety which has caused him substantial difficulty and he and other members of his family have changed their names as a result,’ the barrister explained in mitigation.

In fact, the case epitomises the ‘bad’ gene that runs through the Hamza boys.

It was in 1979 that Abu Hamza arrived in Britain from Egypt. He was given indefinite leave to stay after marrying a British woman. 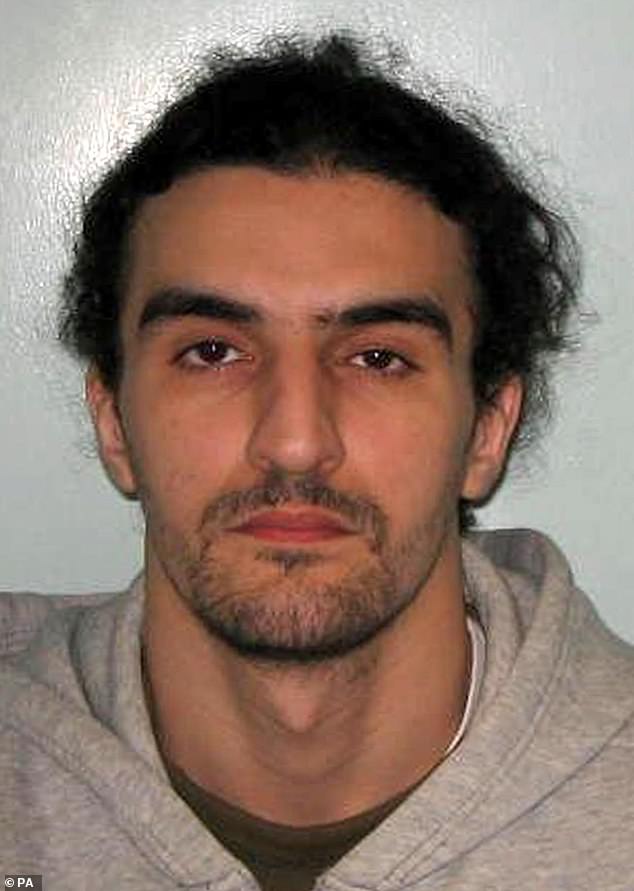 Mostafa was jailed for two years for his part in the scam, along with his brother Tito ibn Sheikh (then still called Hamza Mustafa Kamel) who is now inside for money laundering, and stepbrother Mohssin Ghailam, pictured, (four years)

Few could have possibly imagined the mark he and his as yet unborn sons would leave on the UK.

Hamza had one son with his first wife, Valerie Traverso, and five with his second, Najat Mostafa.

Najat still lives in a Victorian terrace that sits on a quiet gentrified street in Shepherd’s Bush, West London, where the Hamzas have been since the mid-1990s.

The bay-fronted property, painted magnolia, with security cameras, either side of the front door, pointing at visitors, is owned by Hammersmith and Fulham council.

The family of Hamza, who was sentenced to seven years for inciting race hate and murder in 2006 and extradited to the U.S. on terrorism charges in 2012, received state handouts, including housing and child benefit, which totalled more than £33,000 a year at one point.

When, shortly afterwards, matriarch Najat was believed to be living there with only two of the couple’s brood, the local authority asked her to move to a ‘more appropriate’ smaller residence.

She was entitled to refuse their request, however, and the council was powerless to evict her as there was no time limit on the tenancy agreement.

Over the years, the property has undergone extensive renovation at the public’s expense.

The Taxpayers’ Alliance calculated that by the time Abu Hamza was imprisoned in the U.S. he and his brood had cost Britain £2.75 million in welfare payments, council housing, and legal costs.

That figure has now more than tripled.

The Henry Jackson counter-extremist think-tank has estimated that, when the criminal records of his sons have been factored in, the bill this family has inflicted on the British taxpayer will have risen to at least £10 million.

‘The public expect that their taxes go to provide services that benefit all of us,’ said think tank director of communications Sam Armstrong.

‘Instead, all too often it is drained by the likes of the Hamzas who hate and harm this country and exploit every loophole to take what they can.

‘In addition to the eye-watering sums the Hamza family has cost the public purse, there are other costs that are less quantifiable, such as the corrosive impact on the community.

‘Abu Hamza’s crimes were damaging enough, but through his sons he has spawned a new generation of lawlessness.’

Could there be a more egregious catalogue of crimes?

Mohammed Kamel Mostafa, 40 — Hamza’s eldest and only son by first wife Valerie Traverso — was 17 when he was accused of masterminding a bombing campaign to sabotage tourist and economic sites in Yemen in August 1999.

Rocket-propelled grenades, explosives, anti-tank rockets, mines and communication equipment were found belonging to the armed gang. Claims they were tortured into confessing were dismissed by a court.

Mostafa spent three years in prison in the Arab state before returning to London in 2002. 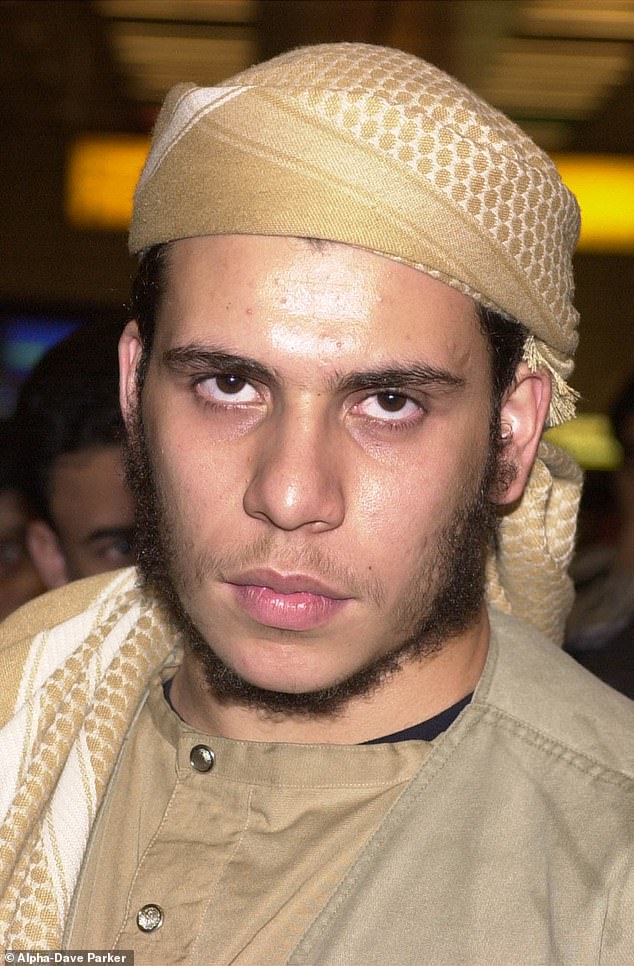 He got a job on the Underground but was fired after colleagues discovered his identity.

Later, he launched a career in rap, with lyrics about waging holy war and carrying weapons. ‘I was born to a soldier,’ one his verses went, ‘Kalashnikov in my shoulder, peace to Hamas and Hezbollah.’

It wasn’t long, however, before he was back behind bars. In 2009, he was part of a gang that targeted luxury cars. They received the log books and keys of vehicles left in long-stay car parks, such as BMWs, Range Rovers and Mercedes, by using a loophole in the DVLA system to divert registration details. The vehicles were then sold on the Continent.

Mostafa was jailed for two years for his part in the scam, along with his brother Tito ibn Sheikh (then still called Hamza Mustafa Kamel) who is now inside for money laundering, and stepbrother Mohssin Ghailam (four years).

Yasser Kamel, 31, is serving four years after police raided his flat in Park Royal, West London, in 2019, and found ‘top quality’ cocaine, MDMA, ecstasy and ketamine with a street value of £30,000.

Among the tell-tale paraphernalia of his ‘trade’ were two electric scales and an encrypted phone. 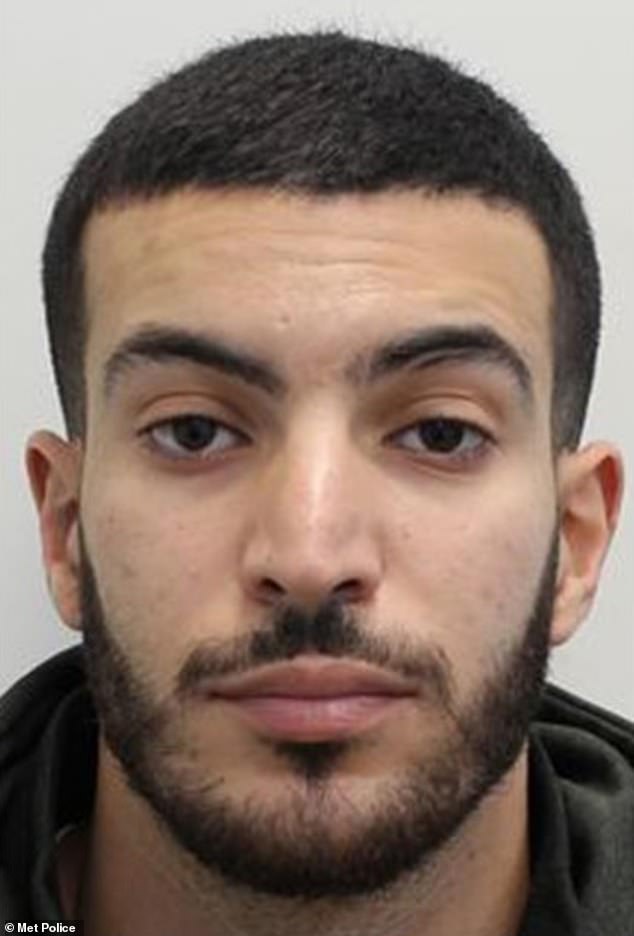 ‘The drugs were high purity and the circumstances show you have close links to the source and the expectation of substantial financial gain,’ the judge told him after he admitted possession with intent to supply class A and B drugs.

Kamel blamed his father’s arrest and extradition, when he was around 14, for his own life of crime. He has a conviction for burglary and spent 12 months in youth detention for attacking police during a demonstration outside the Israeli embassy.

He turned to drug dealing, he said, because he ‘ran out of money to pay rent’.

Imran Mostafa Kamel, 29, was part of a gang that raided a jeweller’s store in King’s Lynn, Norfolk.

They escaped with gems worth £70,000 after brandishing a handgun and smashing display cabinets with a sledgehammer in what was described as a ‘sophisticated and well-planned’ daylight heist.

A ‘smoke-producing device’ was set off in an attempt to disguise those involved. The violent intrusion in 2012 was captured on CCTV. 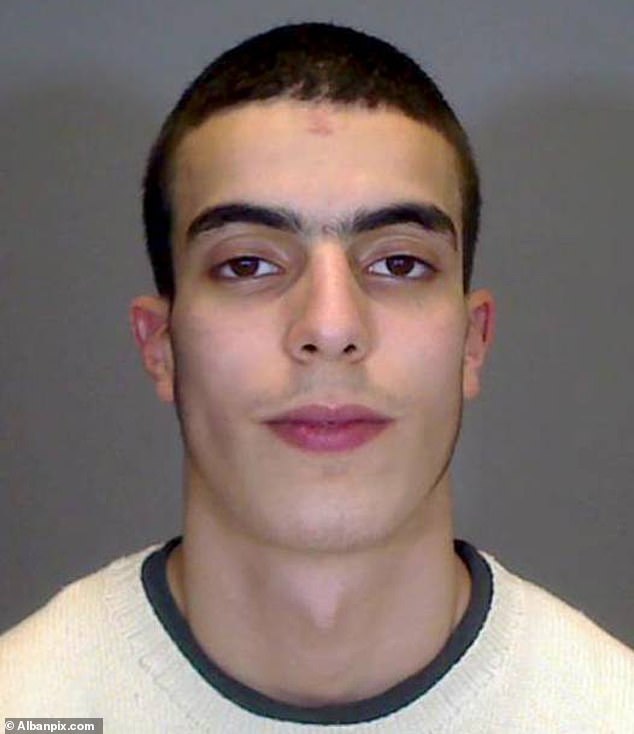 Imran Mostafa Kamel, 29, was part of a gang that raided a jeweller’s store in King’s Lynn, Norfolk

‘For those who had the misfortune to be working in the premises it must have been an absolutely terrifying experience,’ said the judge, who jailed Mostafa for 11 years.

Mostafa had denied robbery and possessing a firearm with the intent to commit an offence.

Two years ago, he was charged with two gun offences after a melee outside a party in London’s Park Lane in which a bouncer was stabbed to death. The charges were later dropped.

He is still listed on the electoral roll as living at the family home in Shepherd’s Bush.

Sufyan Mustafa, 27, was stripped of his British citizenship three years ago.

Former computer sciences student Mustafa had travelled to Syria in 2013 when he was 19. He claimed he was fighting with rebels against the Assad regime. But when he tried to return to the UK in 2018, his name flagged up on a terrorist watchlist and he was stopped from boarding a flight to the UK from Turkey.

Through his mother, Najat, he also had Moroccan nationality but he said he did not wish to go there. 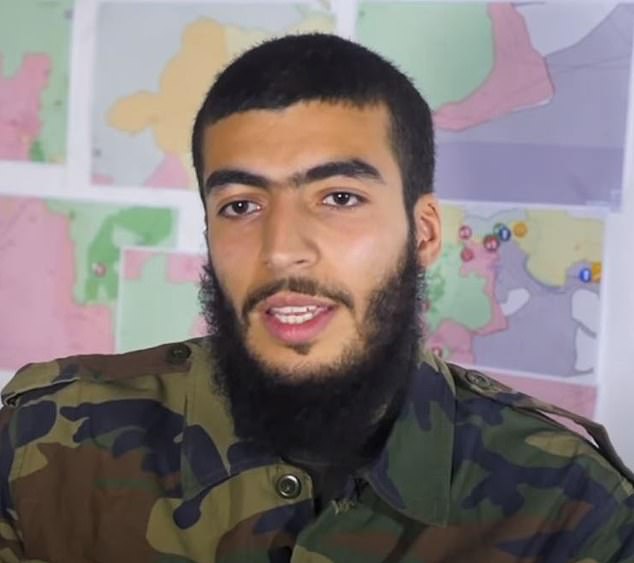 Sufyan Mustafa, 27, was stripped of his British citizenship three years ago

His case has echoes of Isis bride Shamima Begum who also wants to return to Britain.

Mustafa has tried to distance himself from his father.

‘Britain is the place where I was born and lived,’ he said in an interview in 2017.

‘I have never been a threat to national security in Britain and will not commit aggression on its population because our religion does not allow attacks on innocents.

‘Abu Hamza is my father and he has his own opinions and I have mine. Revoking my citizenship just because I am related to Abu Hamza is not allowed and will never enter the world of fair trial.’

Othman Mustafa Kamal, 33, followed in his father’s footsteps and became an imam.

He was captured on video back in 2012 calling for holy war and backed a suspected Al Qaeda terrorist who attempted to murder U.S. FBI agents in Afghanistan.

In one of his filmed ‘sermons’ Kamal, who was preaching at the An-Noor mosque in Acton, West London, recites the Koran to worshippers before graphic images fill the screen including a man holding the head of a decapitated enemy soldier. 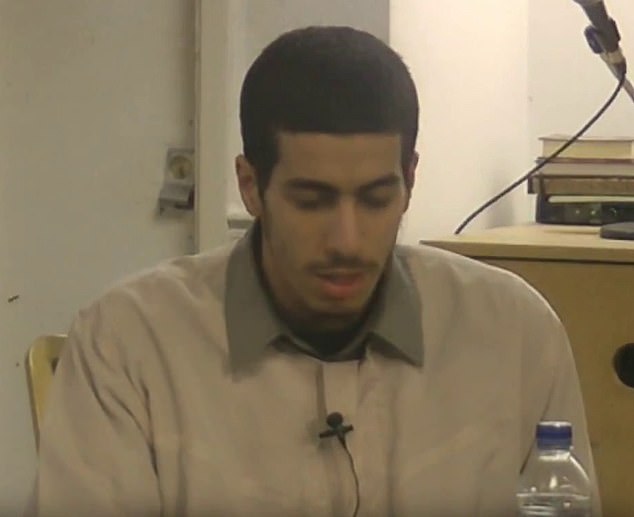 Othman Mustafa Kamal, 33, was captured on video back in 2012 calling for holy war and backed a suspected Al Qaeda terrorist who attempted to murder U.S. FBI agents in Afghanistan

During another clip, he prays for Aafia Siddiqui, dubbed ‘Lady Al Qaeda’, the female Pakistani neuroscientist who was jailed for 86 years in New York in 2010 for the attempted murder of U.S. soldiers who were interrogating her in Afghanistan.

A mosque spokesman at the time admitted his videos could be used by London-based extremists to foment hatred in the capital and should never have been uploaded.

Kamal is no longer connected to the mosque which came under new management in 2015.

More recently, he was the director of a company called Burlington Ltd which rented and leased cars. The company, which was registered at the family home in Shepherd’s Bush where Kamal is still listed on the electoral roll, has been dissolved.

So six sons — plus one stepson — who are all either convicted criminals or linked to extremism have left a bill for the taxpayer running into millions.

What a legacy Abu Hamza has left behind as he languishes in a U.S. jail.