Holiday-starved Brits aren’t the only ones travelling far and wide this summer, as a family of rainbow birds have flown thousands of miles for a stay in Norfolk.

Seven bee-eaters – brightly coloured birds usually found in southern Europe and northern Africa – were seen by a birdwatcher over the Jubilee weekend.

They have since been spotted making nest burrows in a small quarry at Trimingham, near Cromer, and keen twitchers have been flocking to take a look.

However, the Royal Society for the Protection of Birds (RSPB) have warned that they are a sure sign of climate change.

The warmer temperatures across Europe have resulted in the warm-weather-loving species migrating further north to breed. 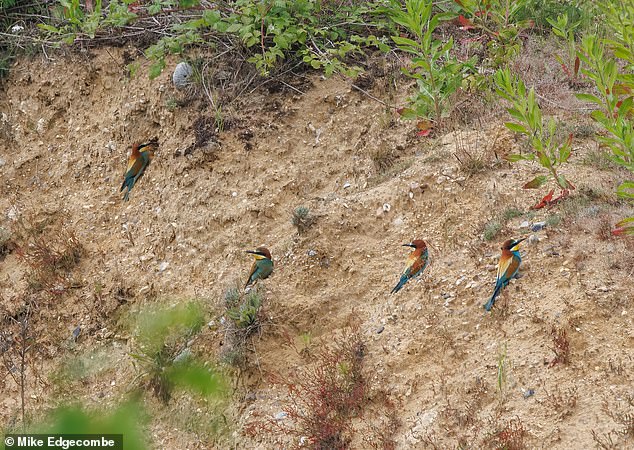 The bee-eaters have since been spotted making nest burrows in a small quarry at Trimingham, near Cromer, and keen twitchers have been flocking to take a look.

1. Rare breeding birds, like the dotterel, common scoter and Slavonian grebe, face extinction as their homes in the UK are starting to change and disappear

2. New species are colonising in the UK as it becomes too warm for them elsewhere in continental Europe, like quail and little egret

3. Birds stopping in the UK over winter as it is getting warmer, so they have no reason to migrate south. Breeding numbers of blackcap and chiffchaff have more than doubled in this country since the 1970s

4. Changing conditions in the sea can mean a reduction in food for and poor breeding success in sea birds, like kittiwake

5. Birds are arriving earlier and leaving later in summer due to warmer weather – swallows are spending up to 4 weeks longer in the UK each year

6. Some birds, like the great tit, are laying their eggs earlier because of the changing climate

RSPB’s Mark Thomas, Head of Investigations at the RSPB said: ‘While an incredible sight, we mustn’t forget that the arrival of these birds to our shores is due to changes to our climate and subsequent pressures on wildlife both here and across the globe.

‘Pushed northwards by climate change, these exotic birds will likely become established summer visitors in the future, having been an early and unmissable sign in the past two decades that the Nature and Climate Emergency has reached our shores.’

Because of the expansion of their breeding range in recent years, European bee-eaters are considered by many to be an indicator species of the changing climate.

The RSPB are ‘closely monitoring’ the birds’ breeding attempt to ensure they have the best chance of nesting.

Mark Thomas added: ‘These seven bee-eaters are certainly the most colourful and exciting birds you can see in the UK right now. In 2017, thousands of people caught sight of the birds in Nottinghamshire, and we expect the same will happen again here in Norfolk.

Bee-eaters are about the size of a starling and can be identified by their red backs, blue bellies and yellow throats.

As well as the bees that give them their name, they feed on dragonflies and other flying insects, which they catch in mid-air. 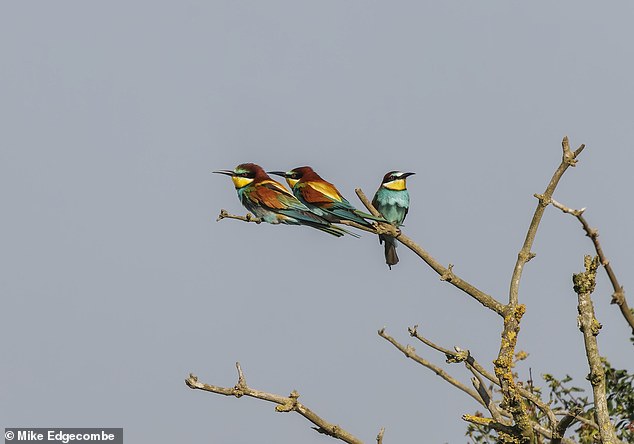 Bee-eaters can be identified by their red backs, blue bellies and yellow throats 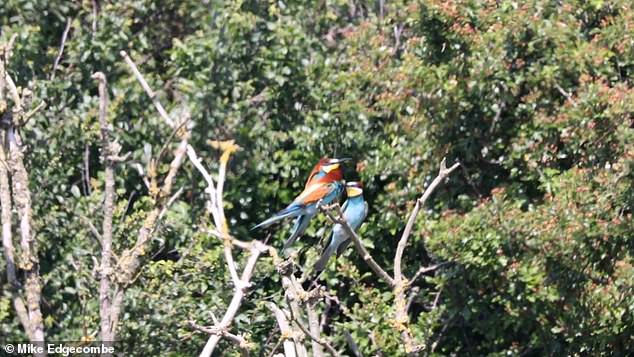 Their calls are a short and soft ‘pju’ sound, often quickly repeated to form rolling phrases

The international team, led by Durham University, found that birds they thought would be suited to the changing conditions ‘substantially’ outperformed those expected to suffer between 1980 and 2010

They studied 145 common European birds and 380 American birds, having split them into groups of ones they thought would prosper through climate change and ones that would struggle:

European species that are increasing, potentially as a result of a changing climate: The Bee-eater, Cetti’s warbler and Chiffchaff.

European species that are declining: Brambling and Willow tit – a northerly breeding species at its western range limit in the UK, where it has declined in numbers by 80 per cent in the last 20 years.

US species that are increasing, but with decreases in some southern states: Darter (Anhinga), Cassin’s kingbird, Orchard oriole.

US species that are declining potentially as a result of climate change: Canada warbler, White-throated sparrow and the Common grackle.

The Common grackle, widespread from the Rockies to the east coast is declining in most of its range, in line with declining climate suitability. 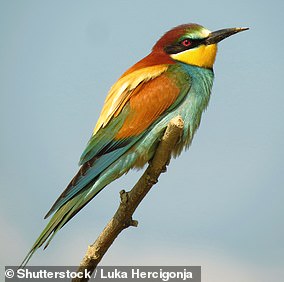 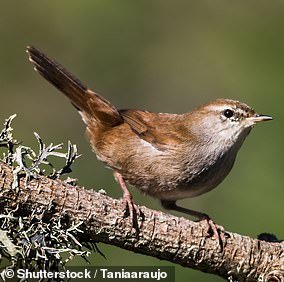 Birds that have been predicted to do well as a result of climate change, have indeed been found to outperform other species in the past 30 years, a study of wildlife in Europe and the US has revealed. Populations of Bee-eater (left) and Cetti’s warbler (right)- species with a southerly distribution in Europe – have increased