A father has spoken of his terror after his seven-month-old son was rushed into hospital gasping for breath with Covid-19 after catching it from him and his partner.

The crisis began between Christmas and New Year when Bonnie Saunders, a nurse at Glangwili Hospital in Carmarthen, Wales, developed coronavirus symptoms.

She had recently returned to work following maternity leave after the birth of her son Jack last year.

Aware of the significance of her symptoms, she arranged to have a Covid-19 test at the local testing station in the Nantyci area, which returned positive.

A few days later her fiancé Alan James started to get similar symptoms, and he too then tested positive.

Mr James, a lecturer at Coleg Sir Gâr who lives in Carmarthen, thought everything would be fine and that baby Jack would not contract the virus, or at least if he did, he would be able to bounce back from it quickly.

Children seem to be less at risk of developing severe coronavirus symptoms and dying from the disease, due to differences between the bodies and immune systems of youngsters and adults, research indicates.

But on January 2, Jack fell ill, developing a fever and eventually starting to wheeze heavily, really struggling to breathe and gasping for air, Mr James said. 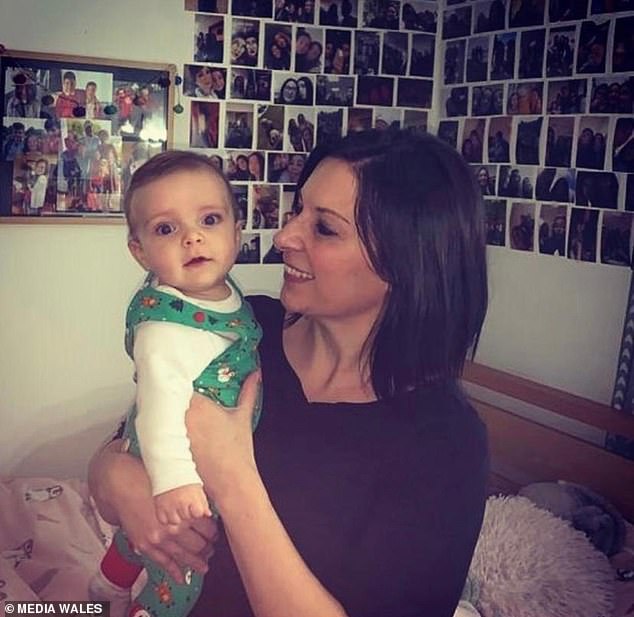 The crisis began between Christmas and New Year when Bonnie Saunders, a nurse at Glangwili Hospital in Carmarthen, Wales, developed coronavirus symptoms 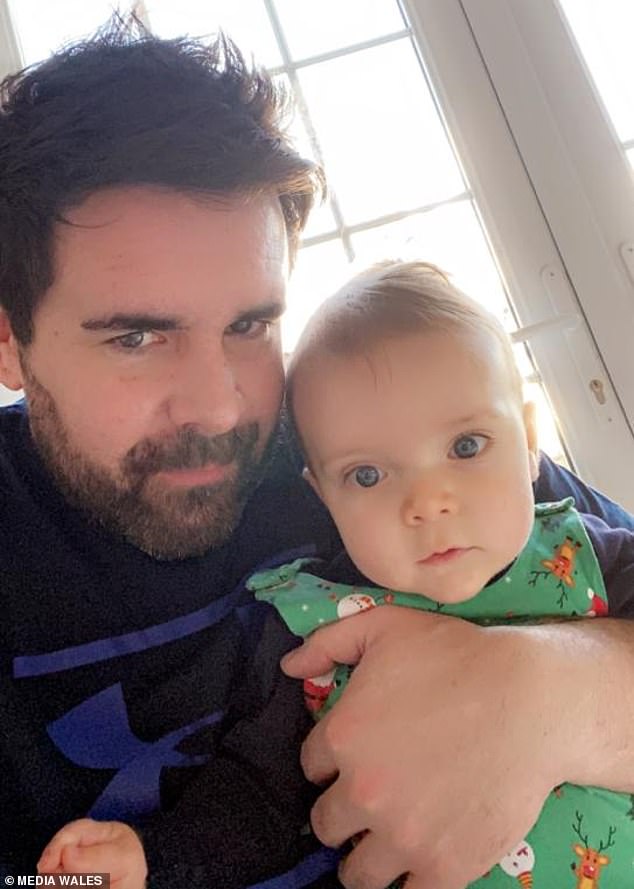 Mr James said: ‘It was obvious before he was tested that it was the virus,’ said Mr James. ‘His temperature was raging and he had a cough, and obviously he had been around the both of us who had tested positive. We arranged for him to be tested and it came back positive.

‘The usual painkiller medicines were doing the trick in terms of keeping his temperature OK and his behaviour and general mood was quite normal so we kept him at home.

‘But then on Monday night he started to wheeze heavily and he was really struggling to breathe. He was gasping for air.

‘We rung the ambulance and they came out and took him to hospital.

Why children are less affected by Covid-19

Children are less at risk of developing severe Covid symptoms and dying from the disease due to a host of differences between the bodies and immune systems of youngsters and adults, a study shows.

Australian researchers have identified several specific physiological differences which may explain why Covid-19 is rarely severe or fatal in children.

These include strong, undamaged cells in their blood vessels which prevent inflammation and clotting; elevated levels of vitamin D; an immune system that is both fast acting and well-oiled; and fewer ACE2 receptors, which the coronavirus uses to infect cells.

Melbourne-based researchers at Melbourne Children’s Research Institute reviewed all currently available research on the topic and analysed the results to unravel the reasons for age-related differences in Covid-19 severity and symptoms.

One key finding was that in many adults with severe Covid-19, so-called endothelial cells which line the heart and blood vessels are already damaged.

Patients with already damaged endothelial cells are known to be at higher risk of blood clots, strokes and heart attacks. SARS-CoV-2, the virus which causes Covid-19, also infects these cells and causes inflammation.

Adults also have a ‘higher density and increased affinity’ of ACE2, the receptor on the surface of cells which the virus hijacks and uses to infiltrate cells, the researchers write.

ACE2 becomes more prevalent as children grow up, which may explain why older children are more likely to develop symptoms than toddlers.

Another contributing factor to the relative immunity of children is the fact they often have been recently vaccinated for other diseases, including with MMR.

This can confer ‘off-target’ protective benefits which effectively help train the immune system and keep it firing on all cylinders.

Children are also more likely to be infected with other pathogens, catching colds and picking up germs in the playground. This can help build a strong natural immune system in a process dubbed ‘trained immunity’, the researchers say.

‘We don’t live that far from the hospital but because all three of us had Covid, and because of the seriousness of Jack’s situation, we phoned 999.

‘I had never rung 999 before, and it’s not a nice experience because you’re dealing with a real emergency – I found that it’s really difficult to concentrate when you’re panicking.’

Jack was put in the ambulance and his mother Bonnie was allowed to go with him to hospital, where he was treated with steroids and given oxygen to help him breathe.

He was kept in all day and allowed home when his condition improved on Tuesday night.

Mr James said his son was now ‘on the mend’ but his recovery might take some time, along with his own.

His partner’s recuperation has been quicker, perhaps owing to the fact that she has already received the Pfizer/BioNTech vaccine.

‘Bonnie, as part of her job, was given the first dose of the Covid-19 vaccine a few weeks ago, and she is due to have the second dose in due course.

‘So, obviously, she caught coronavirus after being vaccinated but her symptoms were far milder than mine and Jack’s. Whether that’s the reason, I don’t know.

‘He’s on the mend but it’s quite slow. It’s not like he has a cold as such, and he’s not sniffling, he’s just very lethargic and not himself, and he has a throaty cough. As for me, it’s been a week since I became ill and I’m still rough now.

‘I consider myself to be reasonably fit and I don’t get ill often, but this has really knocked me back. I remember having the flu a few years ago but this is different. It hits you in the chest and just leaves you with no energy.’

He added: ‘I thought he would be OK because you don’t often hear of young children having it, or becoming ill with it, so the message always seems to be that young people don’t really get affected by coronavirus.

‘Because of what I had read I was more concerned about Bonnie or myself getting it, so it was really shocking to see how it took hold of Jack and just how rapidly he went down with it.

‘It just happened really quickly – the coughing, the temperature, and then the wheezing and the struggling to breathe.

‘I think it’s important to raise awareness that babies do get coronavirus and can become seriously ill with it. Our older children have been fine, they haven’t had any symptoms at all.

‘Maybe that’s because they’re around us less, they spend time in their rooms or outside, whereas a baby is at your side or in your arms all day.

‘As for poor Jack, he hasn’t been ill at all since he was born; he’s never had a cough, not even a sniffle, so the first thing he’s ever caught has been Covid-19.’

He said the shock and terror of waiting for the paramedics to arrive as your baby gasped for breath continued to linger.

‘It was hell,’ said Mr James. ‘It was certainly the scariest thing I’ve experienced.’