An undiscovered tumor has turned a woman into a giant at nearly seven feet tall – leaving her towering over her family and her husband.

Aspiring model Elisane Silva, 26, from Salinopolis, Brazil, has been dubbed  ‘Brazil’s Tallest Woman’ due to her standing at six feet eight inches. She is the tallest member of her family and towers over her husband, Francinaldo Da Silva Carvalho, 31, who is just five-foot-four.

‘Since I was 10 years old, I always noticed that there wasn’t something quite right as I was the only one in my family and class that stood at a staggering five feet nine inches,’ Elisane said. 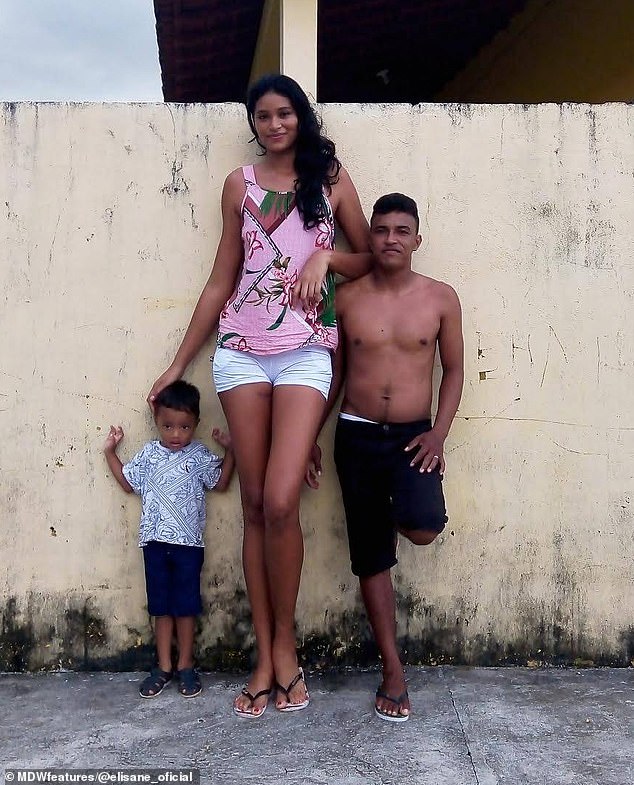 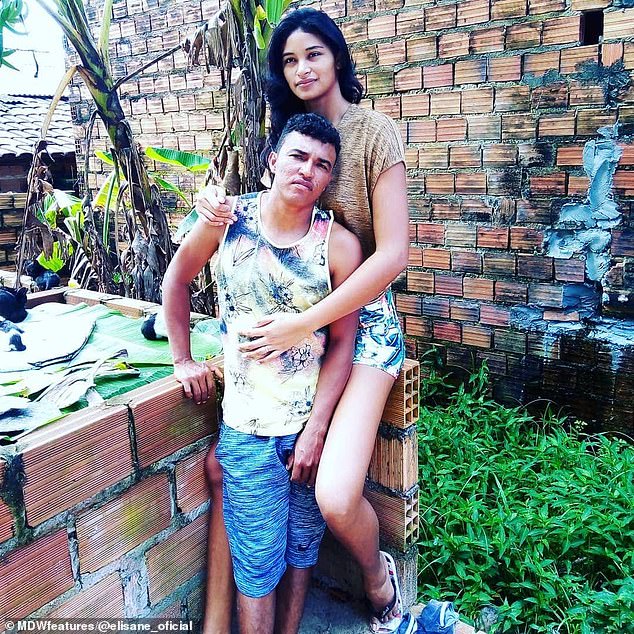 Love: Elisane and Francinaldo’s nearly two-foot height difference has never been an issue in their relationship

Her parents, Ana Maria Ramos and Luiz Jorge, had no idea that their daughter would grow to be nearly seven feet tall.

‘My mother is only five feet four inches and my father is just five feet seven inches, so it was a shock to our entire family when I was the tallest member at so young,’ she explained.

At 10 years old, Elisane began feeling an intense pain in her bones and had a build-up of pressure in her head, which she believes was due to the excessive rate at which she was growing.

She was already five feet nine inches tall, and her mother began getting concerned. She visited a medical professional who wanted to perform multiple tests to diagnose her condition, but the family couldn’t afford the costs. 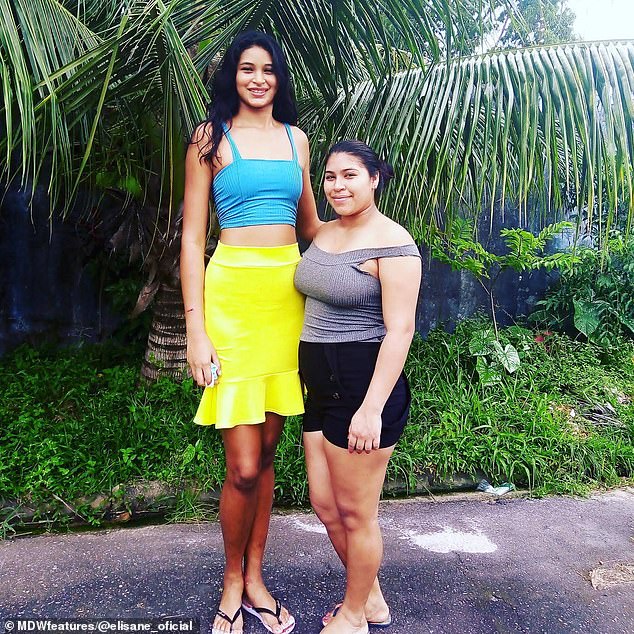 Difference: The aspiring model towers over her mother, Ana Maria Ramos, who is only five-foot-four 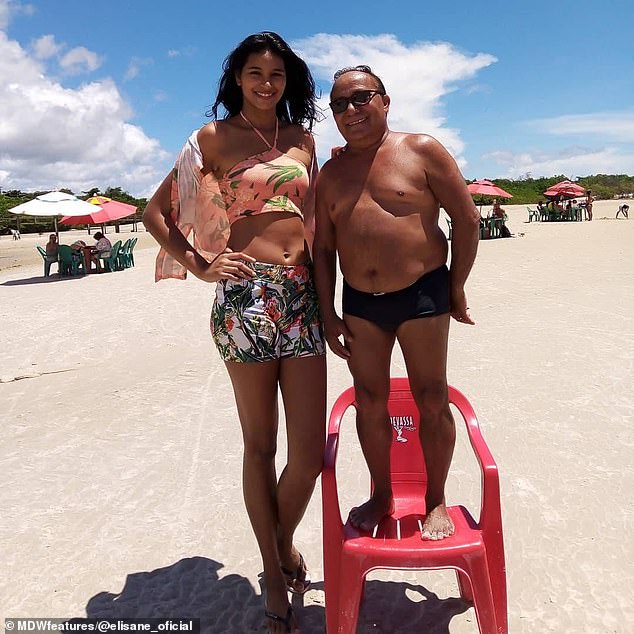 Daddy’s girl: Elisane’s father, Luiz Jorge, is slightly taller at five feet seven inches, but he still has stand  on a chair to be eye to eye with her 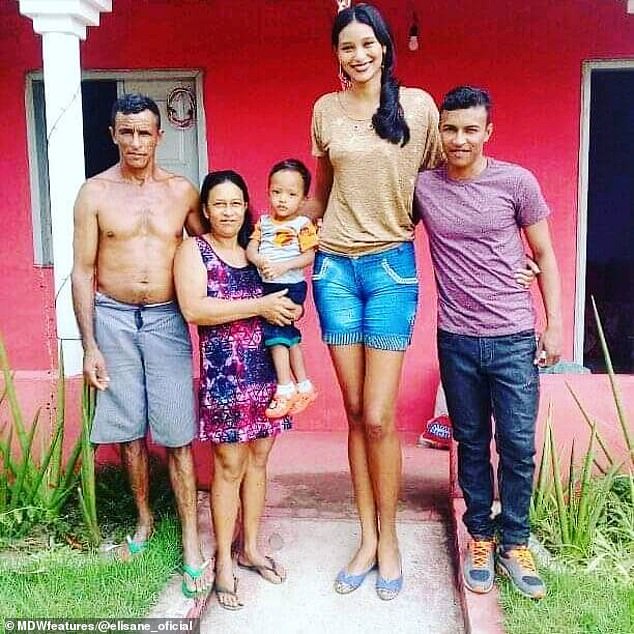 Shocking: Her parents had no idea that she would grow to be nearly seven feet tall 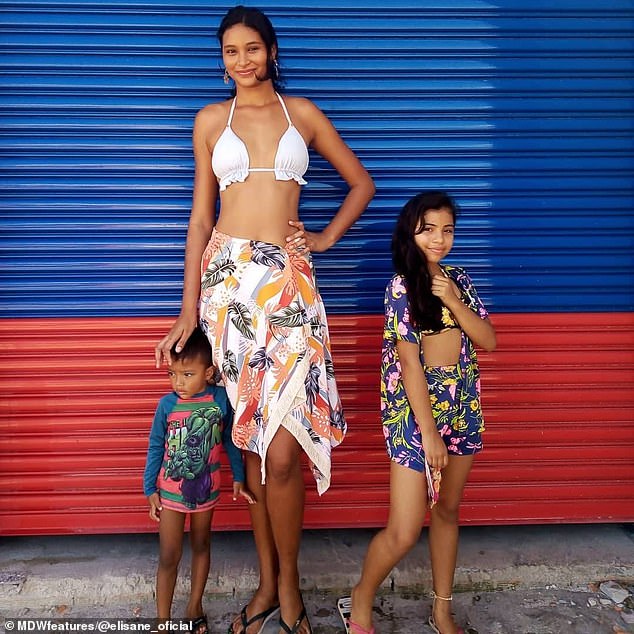 Looking back: By the time Elisane was 10 years old, she was already a staggering five-foot-nine

‘Although this was embarrassing, I was just glad to finally have an answer and to stop the pain that I was going through as a result of my height.’

Medics found that she had a benign tumor growing on her pituitary gland that had caused an overproduction in her growth hormone, leading to her excessive growth rate and staggering height that is known as ‘gigantism.’

Despite Elisane coming to terms with her diagnosis, her classmates at school began bullying her every day, calling her hurtful names such as ‘tower’ and ‘giant’ that caused so much pain, she decided to quit school.

‘I remember locking myself up at home as I felt so sick with the hurtful comments and words people were constantly saying to me,’ Elisane said. ‘I decided to give up and it was the hardest decision I have ever had to make, as I wanted to continue studying, but I knew that I wouldn’t last any longer in that environment.

‘At the time, I was 17 years old, so my parents didn’t have much to say on the matter and I was really lost about where to go next in life.’ 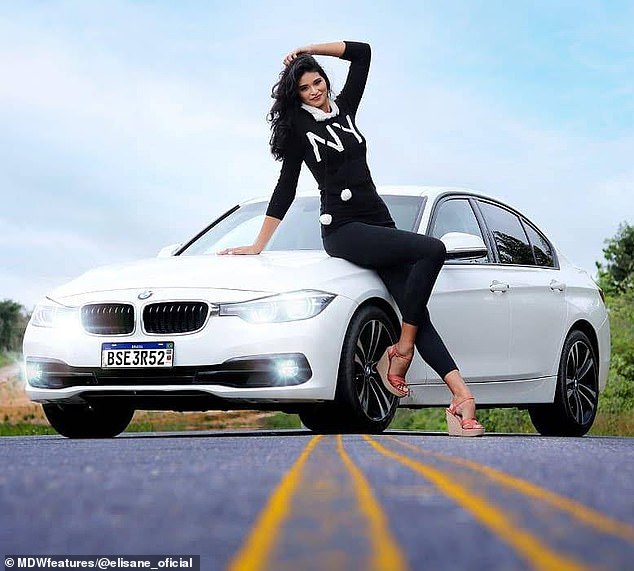 Setback: Elisane visited a medical professional who wanted to perform multiple tests to diagnose her condition when she was 10, but the family couldn’t afford the costs 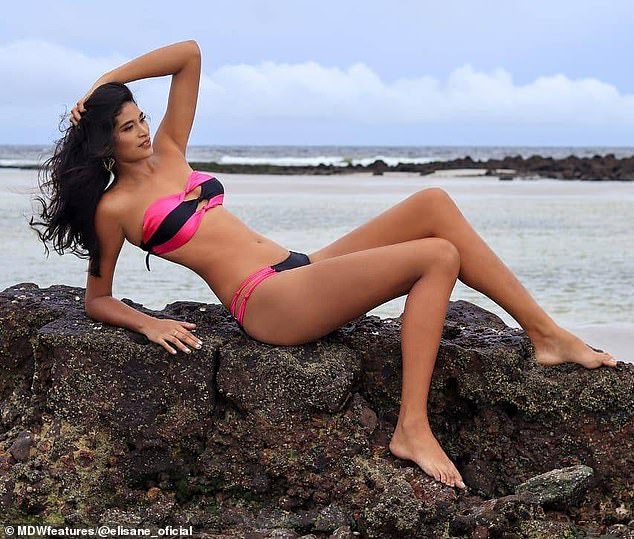 Opportunity: A national television network paid for her medical testing in exchange for her sharing her story on air 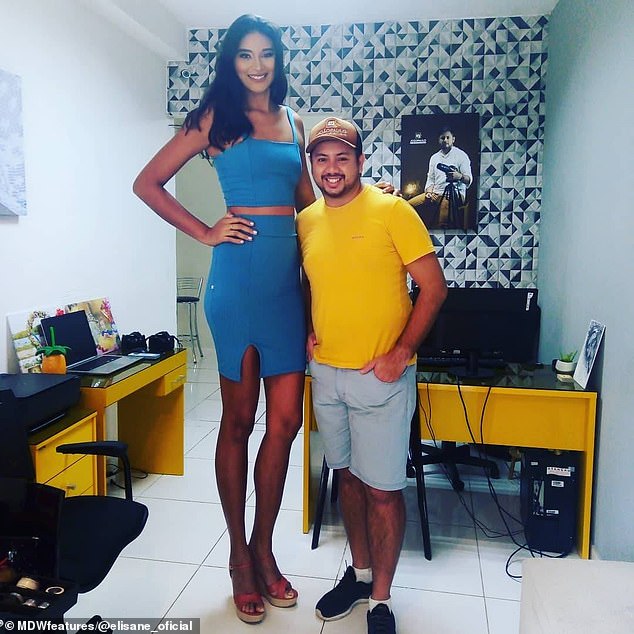 Diagnosis: Medics learned she had a benign tumor growing on her pituitary gland that had caused an overproduction in her growth hormone, a condition known as ‘gigantism’ 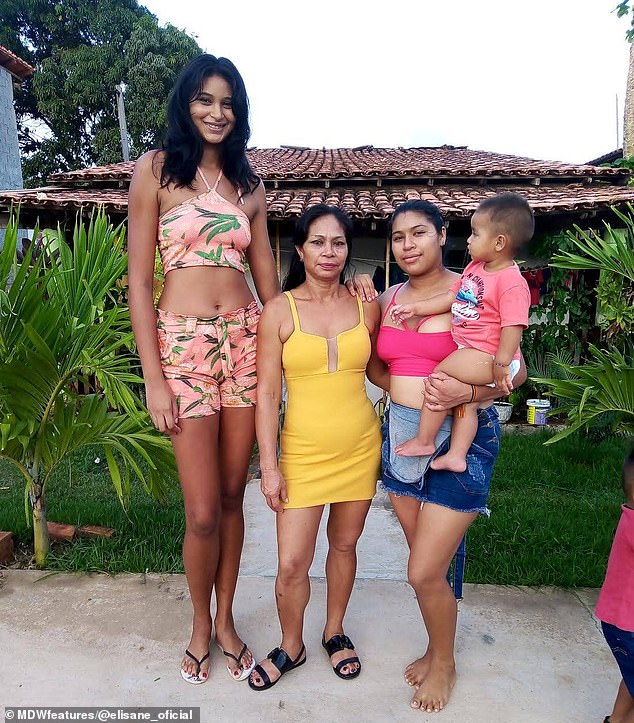 Painful memories: Elisane was bullied so much in school over her height that she dropped out at 17

In 2011, Elisane met her husband and despite the nearly two-foot height difference, the two felt a connection and instantly fell in love. Francinaldo didn’t make any comments about her height and accepted her for who she is, which was important to Elisane.

‘I fell for him right there and then, as he was the first person to treat me like a human being and not some freak of nature,’ she said.

‘Although there is an obvious height difference, we don’t see it as an issue as we love each other just the way we are and wouldn’t want anything to change.’

The duo quickly got engaged and wed in September 2015. They went on to have a child, Angelo, who is now three.

‘We used to get comments from people in the street when we were walking together, I’m no longer the center of attention now we have our beautiful son,’ Elisane said.

‘Angelo is already three feet three inches at three years old, but I don’t believe he will grow to be as tall as me because I don’t think my condition is hereditary,’ she added. 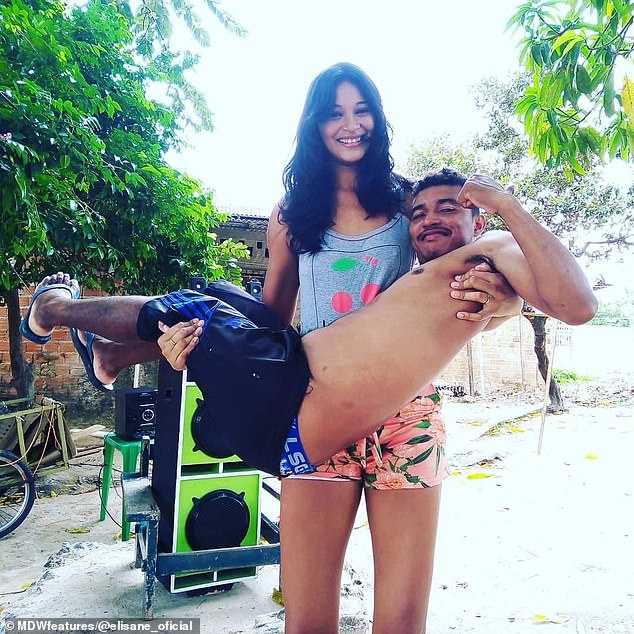 Happy: Elisane met her husband in 2011, and they wed four years later in September 2015 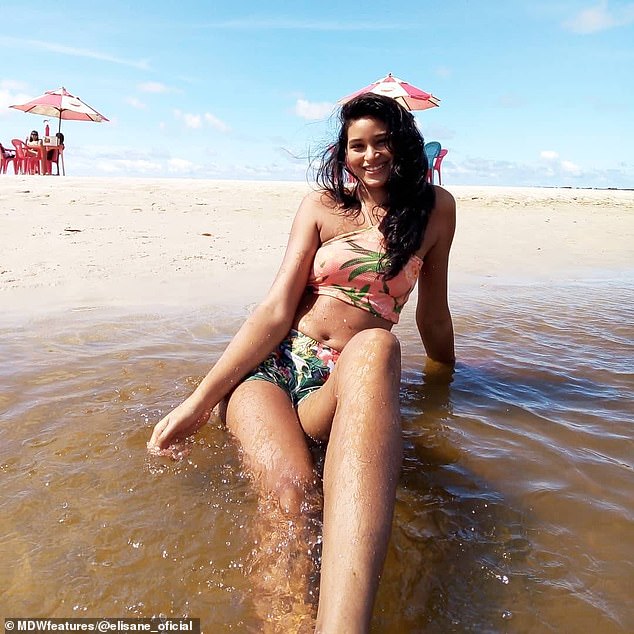 Grateful: Elisane said her husband was the first person who treated her ‘like a human’ and not some freak of nature’ 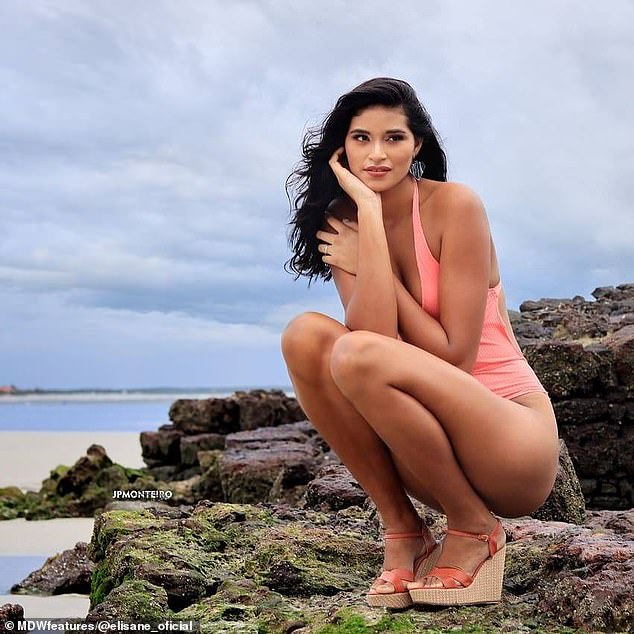 Goal: Elisane has embraced her height and is working toward becoming a professional model, a dream of hers since she was 15 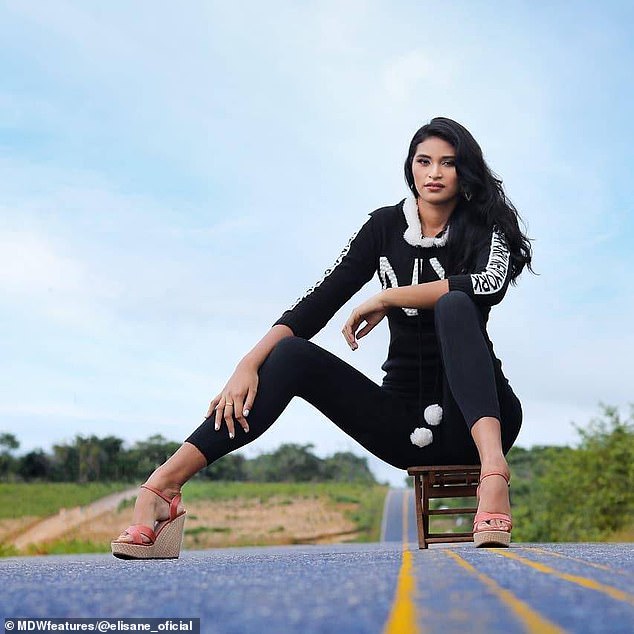 Undeterred: Elisane said she hasn’t been signed by an agency yet, but posing for photos for her portfolio has helped build her confidence

‘I think he will grow up to be average height – but even if not, he should embrace the unique asset he has been given.

Elisane has also embraced her height, and she is working toward becoming a professional model, a dream of hers since she was 15 years old.

‘Although I haven’t been successful just yet, I usually go out and take professional photos of myself and add it to my portfolio to pass on to agencies,’ she explained.

‘Despite no agencies picking up on them yet, these photo sessions have helped my levels of confidence immensely and I have started to love myself for who I am.’

Elisane said she gets comments from people online who have branded her the ‘tallest woman in Brazil,’ but she noted that while it may be true, it’s not an official title.

‘I have learned to love myself for my unique height, as there’s no one quite like me and I think that’s rather special,’ she said. ‘I have found a good man to love, have a wonderful son, a beautiful family, and I am grateful that God has taught me to overcome these obstacles in life.

‘Don’t let people’s evil comments interfere with your life, as it’s not for them to judge you based on how you look or who you love – stay true to yourself and you’ll live happily.’