To mark the special occasion, the Reddit co-founder penned a sweet and emotional post on Instagram that reflected back on how much she’s changed his life for the better.

‘How are you already [five-years-old] @olympiaohanian ??’ Ohanian, 39, began in the caption alongside a couple of recent photos of himself and his little girl.

Daddy’s girl: Alexis Ohanian, 39, shared a sweet tribute to his daughter Olympia, whom he shares with wife Serena Williams, on her 5th birthday

‘I love you more every single day, you’ve made me a better man, and I’m so grateful your mama brought you into this world. I’m gonna Uppy you forever!’

The internet entrepreneur and investor, who also shared a video of Olympia giving him an adorable kiss on his cheek, went on to make a reference to his 776 Fund, the software-enabled venture capital firm that he founded in 2020.

‘I started @776fund thanks to you and it shares your birthday… thanks @katelin_cruse @elisabethgarvin – these last two years have been otherworldly.’

He ended the post: ‘And thank you @christinatosi & @milkbarstore for a very memorable “caking” session.’ 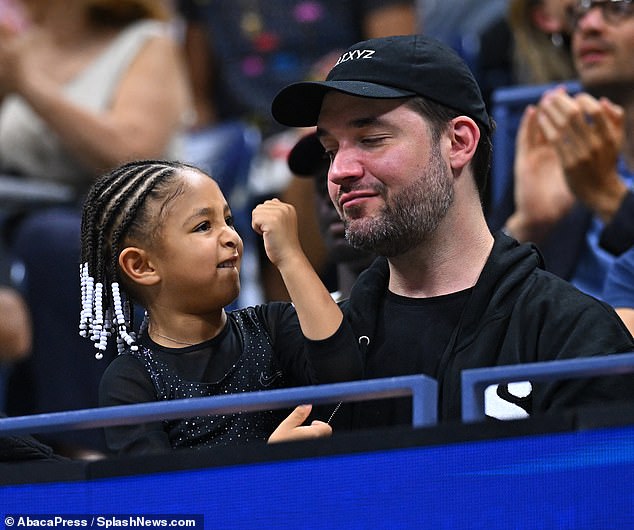 Birthday girl: Along with the photo of himself puckering up to give his daughter a kiss, the proud father also shared a picture of Olympia doing a fist pump while seemingly watching one of her mother’s recent tennis matches; the duo seen on August 29 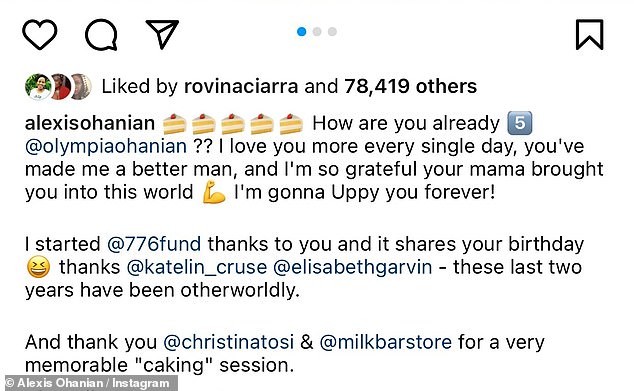 Emotional: The Reddit co-founder confessed: You’ve made me a better man,’ in his birthday tribute to his daughter that he posted on Instagram on Friday 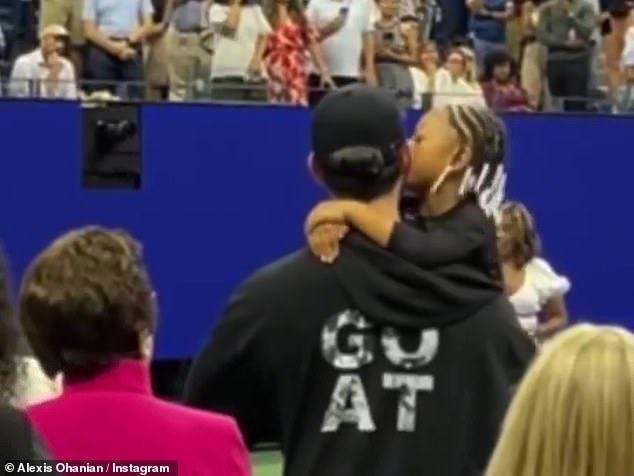 Sweet: The Businessman and investor also shared a video of Olympia giving him an adorable kiss on his cheek in the Instagram post on her birthday

For the cover photo, Olympia can be seen resting her cheek on her dad’s face with her arms wrapped around his neck.

In response, the proud papa puckered up for the camera as he carried her in his arms.

The second picture shows Olympia doing a fist pump next her father while watching a recent US Open match, where he mother competed. 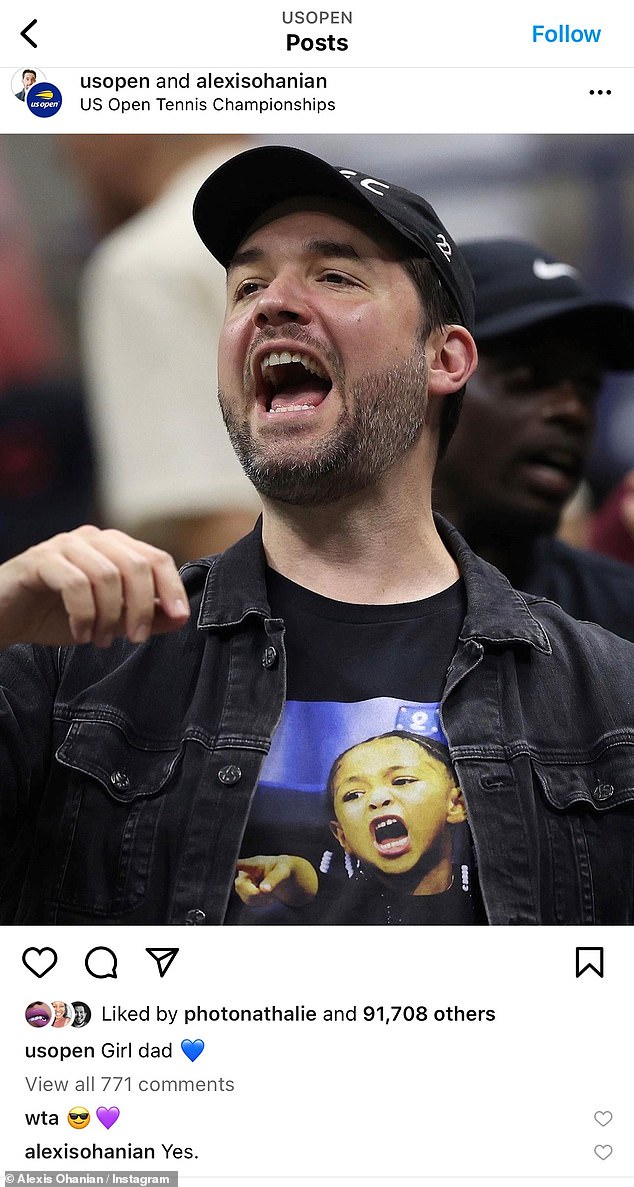 Another Olympia tribute: Ohanian also paid tribute to his daughter by wearing a t-shirt with her image on the front while watching his wife play at the U.S. Open on Friday 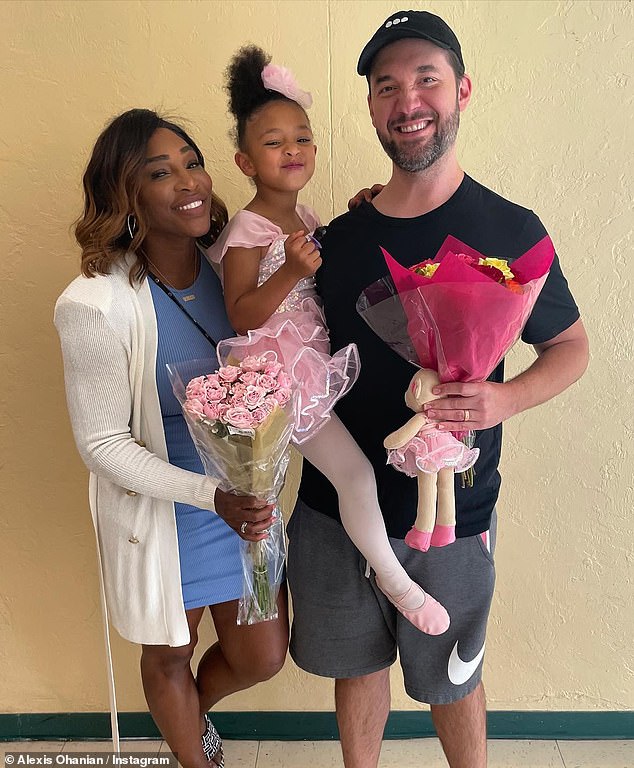 Going strong: The couple have been married for more than four years

Ohanian also paid tribute to Olympia while cheering on his wife as she tried to extend her run at the 2022 U.S. Open this week.

On Friday, as Williams was sweating out on the court in her third round match against Ajla Tomlijanovic, her husband was in the stands wearing a black t-shirt with his daughter’s image on the front of it.

The picture shows the little girl supporting her mom by shouting and pointing at the court during her match on Monday.

Representatives with the U.S. Open shared the comment: ‘Girl dad,’ along with a blue heart emoji, which got a quick response from Ohanian, who readily agreed by writing, ‘Yes.’ 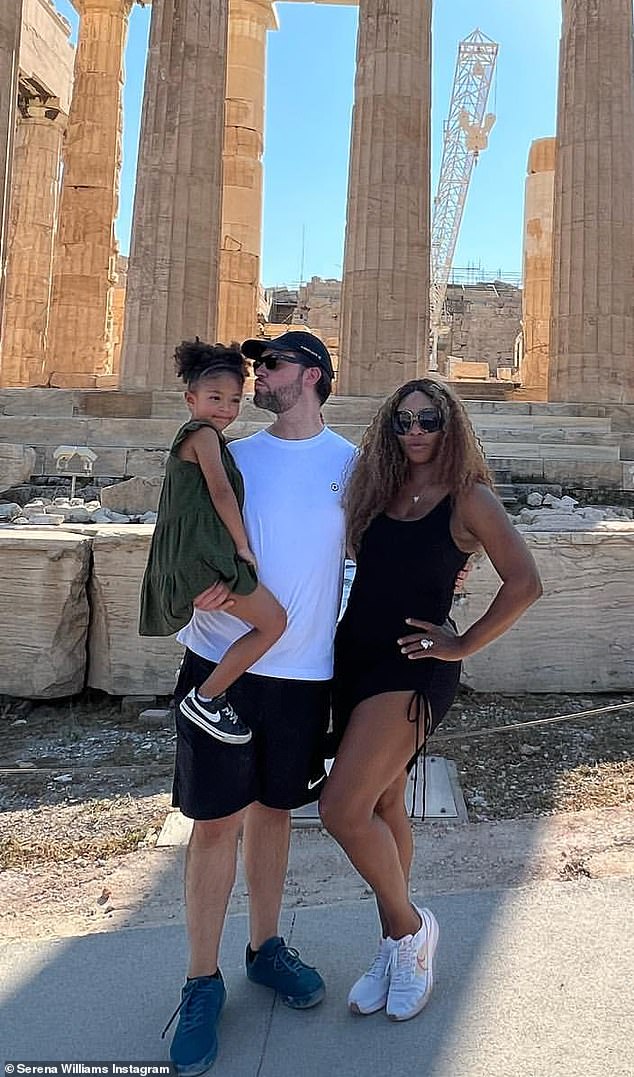 Socializing: Ohanian and Williams have been giving updates on their daughter on social media 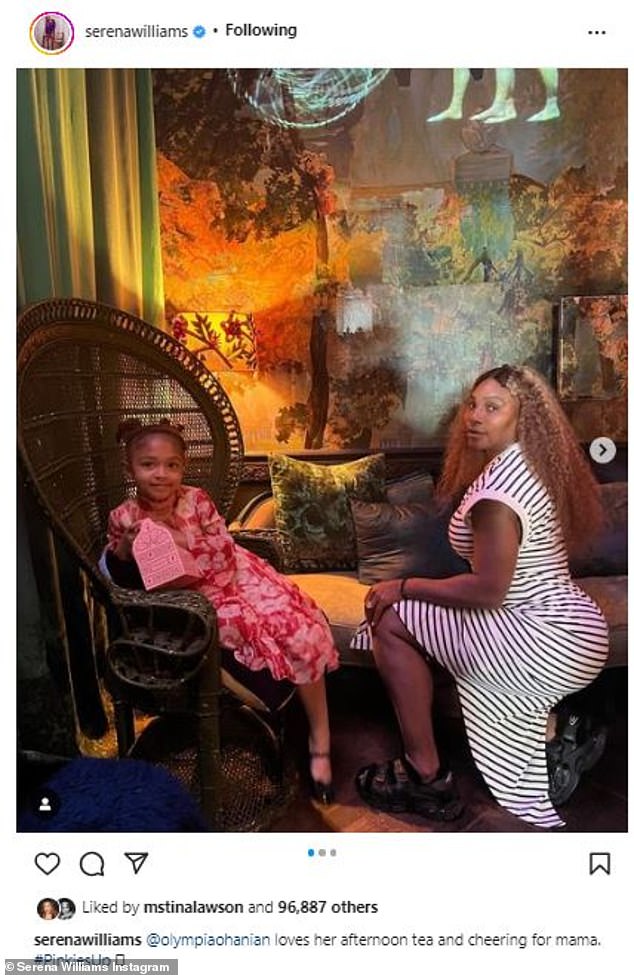 The Olympia t-shirt has since caught the attention of many fans who asked if they could buy one, but Ohanian made it clear it would be a one-of-a-kind by tweeting back: ‘1 of 1.’

Ultimately, Williams was beaten by Tomlijanovic, the 46th ranked player, on Friday, which seemingly marks the end of her amazing career.

In August, the California native announced she would be ‘evolving away’ from the game of tennis after the U.S. Open. However, being an ultimate competitor, Williams offered a glimmer of hope that her career may not be over shortly after her defeat, as reported by SI.com.

When asked in her post-match interview if she would contemplate returning, Williams smiled and replied, ‘I don’t think so, but you never know. I don’t know.’

The all-time great, who has won 23 Grand Slam titles during her 27-year career as a pro, turns 41-year-old on September 26. 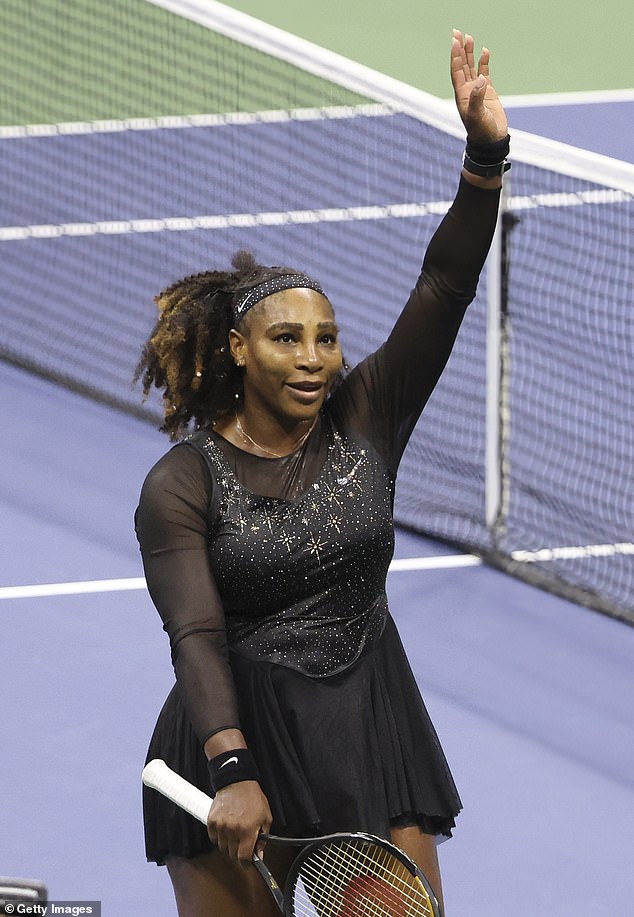 End of an era: Williams waved goodbye to fans after losing her third-round match at the U.S. Open on Friday, which appears to be the final of her career after announcing she would be ‘evolving away from tennis’ in August; she’s pictured at the USTA Billie Jean King National Tennis Center in Queens, New York 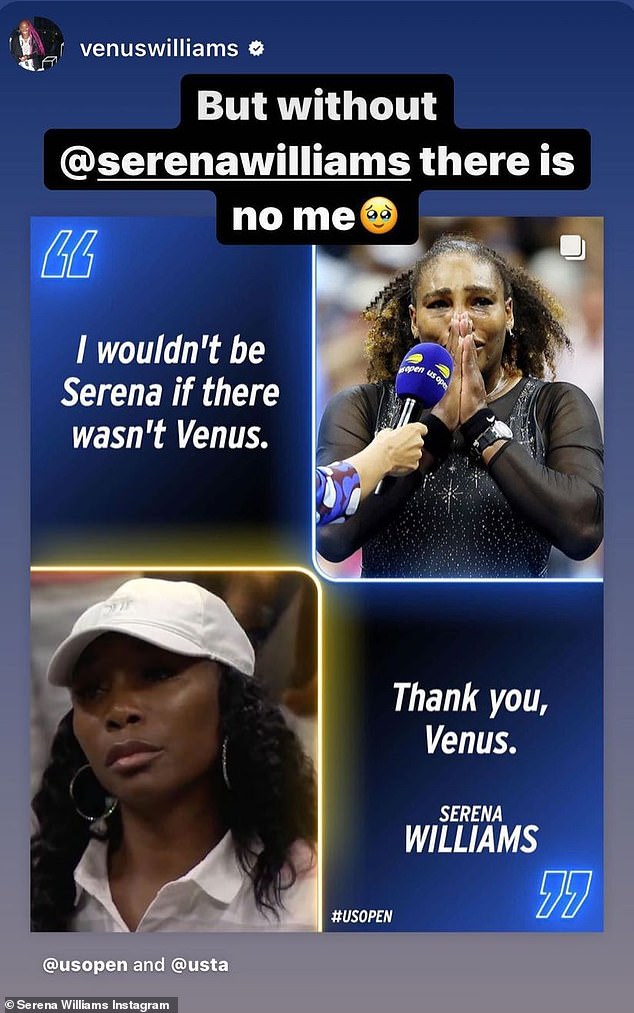 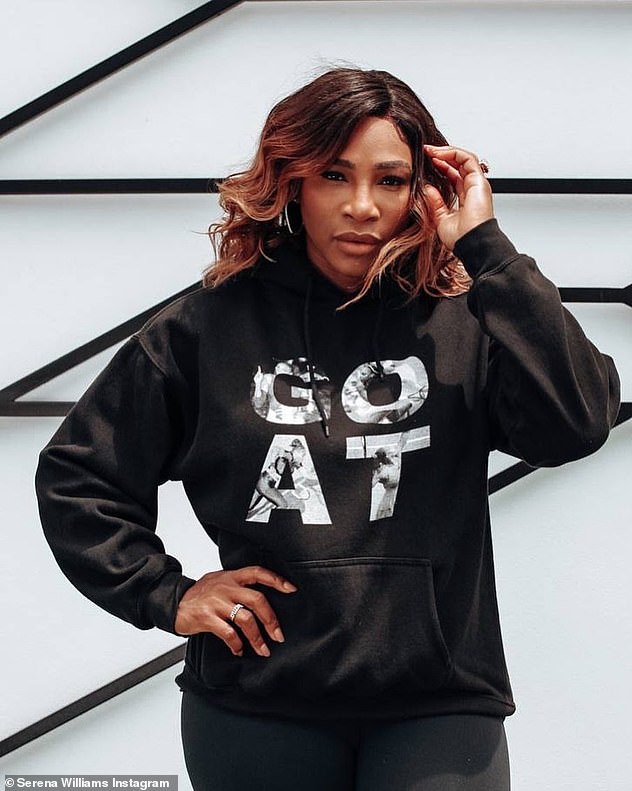 The GOAT: If Williams remains retired, she ends with 23 Grand Slam singles titles, which is tops in the Open Era, and the second most of all-time behind Margaret Court’s 24