The Government is being urged to launch a long-term plan to fund social care, and to integrate the system more closely with the NHS.

Prime Minister Boris Johnson has a ‘now or never’ opportunity to use public support shown during the pandemic to set out why a new tax may be necessary, according to former Tory health secretary Jeremy Hunt.

He floats the idea of following the lead of Japan and Germany in introducing a small surcharge for over-40s, which rises as you grow older.

Meanwhile, Andy Burnham, a Labour predecessor as health secretary who is now Mayor of Greater Manchester, suggests placing social care within the NHS.

Reforms delayed: The social care system is under close scrutiny after many care home residents died during the coronavirus pandemic

Burham says the coronavirus has revealed how ‘broken’ the social care system is, and  that it would be ‘immoral’ not to reform it.

But he warns it would be a ‘waste of money’ to introduce a new tax or levy to fund the system without fundamental changes to the way care is delivered.

This offered a ‘guarantee’ that no one needing care will have to sell their home to pay for it.

But plans have effectively been on hold since the 2017 election, when former PM Theresa May’s idea to introduce a £100,000 ‘floor’ on personal contributions to care bombed so badly with voters that it was dropped mid-campaign.

A Department of Health and Social Care spokesman says: ‘We are focused on ensuring all those who need it get the care and support to stay safe and well during the Covid-19 pandemic and throughout this winter, including through regular testing of staff and residents and free personal protective equipment.

How is care paid for at present?

Under the current system someone’s assets – including the family home – is depleted down to £23,250 if they need to go into a care home.

If you need care in your own home, your assets must be depleted to a level set by your local council, which cannot be lower than £23,250, but your home is excluded from this means test.

More than 17,000 pensioners were forced to sell homes to pay for social care last year, research by This is Money’s sister publication Money Mail recently revealed

‘We remain committed to sustainable improvement of the adult social care system and will bring forward proposals as soon as possible.’

Hunt, now chairman of health and social care committee of MPs, suggests addressing the issue – as Johnson promised when he entered Downing Street – could provide the Prime Minister with a legacy similar to the establishment of the NHS by a Labour government after the Second World War.

He says: ‘I think the biggest battle now is with the Treasury, because the sums of money are eye-watering.’

But he adds: ‘We were even more bankrupt as a country after the Second World War and then we had the imagination and vision to set up the NHS, and I think this is another 1948 moment.’

MPs on his committee recently proposed a £46,000 cap on every individual’s social care bill and an immediate £7billion injection of cash to address a funding crisis.

They endorsed an upper limit on what people should pay towards care, to protect them against ‘catastrophic’ costs, at the same level suggested in the influential, government-backed Dilnot report in 2011.

Mr Hunt says a tax on the middle-aged might be required, along the lines of the systems used in Germany and Japan.

‘Both of them, interestingly, introduced a tax surcharge to people over 40, which is only a small amount extra, but as you get older you start to pay a little bit more. And neither have had public pushback for doing that,’ he says.

An alternative is the model in countries like Italy or Spain, where families look after their elderly relatives, something which often results in women staying at home rather than pursuing a career.

‘I suspect that’s a price we would not want to pay in this country,’ says Mr Hunt.

He adds that the Prime Minister understands the need for action because ‘the way that we treat older people in this country has neither kindness nor decency at the moment’.

And Hunt believes that, with the advantage of a healthy Commons majority and public support for action, Johnson should adopt a bold approach.

‘I just think the year after the pandemic, if we don’t do it now, it really is now or never. Because the public have never understood better how important our care system is.’

He adds: ‘I don’t think Boris needs me to tell him this, but boldness always pays off in politics. 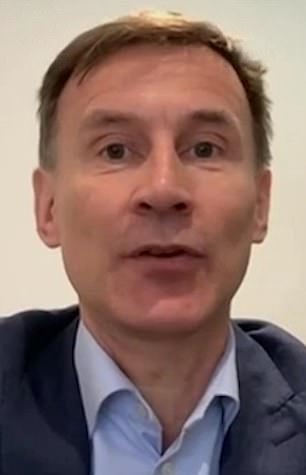 Jeremy Hunt: ‘We were even more bankrupt as a country after the Second World War and then we had the imagination and vision to set up the NHS’

Burnham questions whether the social care debate has become bogged down with how to drum up extra funds and prevent people being forced to sell their homes and lose their savings.

‘It kind of puts finance first before it even thinks about delivery,’ he says. ‘What we’re trying to do in Greater Manchester is do it the other way around.

‘If you think about delivery differently you will then work out what your financial gap is, what you need to put into this system.’

Burnham suggests a new approach, more closely integrating the social care system with the NHS, is the only way to cope with the challenge of an ageing society.

In Greater Manchester, he says there is a much closer relationship and a developing ‘sense of a single system’.

Burnham says he would want to work with NHS England to strengthen the idea of a single system.

That could involve the NHS directly commissioning social care, or working with trusted providers, something which could also drive up pay, standards and training in the industry.

He says: ‘In the century of the ageing society you cannot continue to think of social as being separate to physical and mental. You have to have a system that can see the whole person.

Mr Burnham says there are people in the Conservative government who understand the social care crisis.

Care Minister Helen Whately ‘seems to get it’, he says, but ‘I just hope it’s understood at the very highest levels as well’.

On the impact of the pandemic, Burnham says: ‘I feel that, for the first time since I’ve been raising issues around social care, I think the country can now see how broken it is.

‘I think that’s one thing that 2020 did reveal, the disparity between hospitals and care homes. Back in April that was really clear, wasn’t it?

What has Burnham done about social care in Greater Manchester?

Health funding is devolved to the region, and Andy Burnham says there are closer ties between the NHS and care providers there than elsewhere. 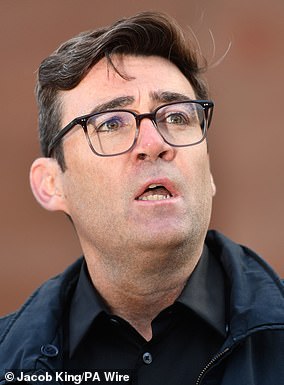 Andy Burnham: ”If social care was placed within the NHS it would allow the NHS to act more preventatively than it currently does’

This meant hospitals were able to loan personal protective equipment to care homes at the height of the pandemic ‘which probably doesn’t happen anywhere else’, because ‘there’s trust in the system, there’s relationships between the social care world and the NHS’.

A version of the hospital ‘operational pressures escalation levels’, or Opel, which is used to measure demand and pressures, was also introduced for social care so see how ‘it was coping or where there were warning signs within that system’, says Burnham.

These are relatively modest measures, but he says: ‘Rather than a fragmented landscape of providers, which is social care normally – there’s an attempt here to sort of look at it as a system, and manage it a bit more as a system, linking to the NHS.

‘So those are the kind of things that are probably not happening in the same way as other parts in other parts of the country.’