The phrase ‘making my stomach turn’ has usually been taken as simply metaphorical.

Now, UK scientists have proved that changes in our stomach’s natural muscle rhythms can quite literally prompt us to turn away from disgusting sights.

In experiments, the experts successfully used domperidone, a commonly-prescribed anti-nausea drug, to stabilise the rhythm of the electrical signals in stomach muscles.

This made them less prone to turn away when presented with pictures of faeces – but only after they were sufficiently exposed to the pictures while under the influence of the drug, the experts found.

Researchers at the University of Cambridge reveal that changes in the rhythm of our stomachs prompt us to look away from disgusting images. They showed volunteers either neutral images of clothing or disgusting images – of faeces

But the signals’ rhythms can become abnormal when we are hungry or full of food, feeling nauseous or experiencing a strong pang of revulsion.

When they are strongly disrupted – for example, when we feel strong revulsion towards something – they can cause us to throw up the contents of our stomach.

Disgust has evolved to help us survive, encouraging us to avoid things that might spread disease, but for some disgust can become pathological, affecting mental health and quality of life.

‘We’ve known for some time that when you see something disgusting, your stomach muscles’ electrical signals become dysregulated,’ said Dr Camilla Nord at the University of Cambridge.

‘[This] in some cases causes people to feel sick or their stomach to turn. You’re then likely to avoid that thing.

‘What we’ve shown here is that when we steady the stomach’s electrical signals, people become less avoidant of a disgusting image after engaging with it.

Domperidone is an anti-sickness medicine. It helps you to stop feeling or being sick (nausea or vomiting).

Domperidone comes as tablets or as a liquid that you swallow and is available on prescription only.

It is also known by the brand name Motilium.

You usually take domperidone when you need it, up to three times a day.

It is generally prescribed for a short time only (usually up to 1 week).

In April 2014, the UK government’s Medicines and Healthcare products Regulatory Agency released advice that domperidone should no longer be prescribed to treat conditions such as gastro-oesophageal reflux and heartburn.

The decision came after nearly 60 people died from heart problems after taking the medication.

It was thereafter restricted to nausea and vomiting treatment.

For their study, 25 volunteers aged between 18 and 35 were randomly assigned to one of two groups – one that received domperidone and the other that received a placebo.

Before taking their pills, volunteers were shown a series of unpleasant images of faeces along with neutral images, such as a scarf or buttons, while the researchers tracked their eye movements to measure where they or not they were avoiding looking at the image.

Half an hour after taking their tablets, the volunteers were again shown the images while their eye movements were tracked again.

Next, the researchers offered an incentive to the volunteers – for every four to eight seconds that they could look at a disgusting image, they would receive 25p.

The money was a way to encourage people to look at the disgusting images for longer, according to study author Dr Edwin Dalmaijer.

‘People are naturally disinclined to look at disgusting images (which is what we measure), so we needed something that would get them to look anyway,’ Dr Dalmaijer told MailOnline.

‘While people receive money for it, they look at the disgusting images even if they would normally avoid them.

‘It is during this time that, under the influence of domperidone, their body likely starts to notice that the disgusting images maybe aren’t quite so bad.’

Lastly, the volunteers viewed the images again for a final round, but this time with no monetary incentive.

The volunteers were also asked to rate how disgusting they found the images at the start and end of the trial.

The researchers found that initially, taking domperidone made little difference to the time the volunteers spent looking at a particular image.

As was expected among both groups, the dwell time increased dramatically when they were paid to look at the images. 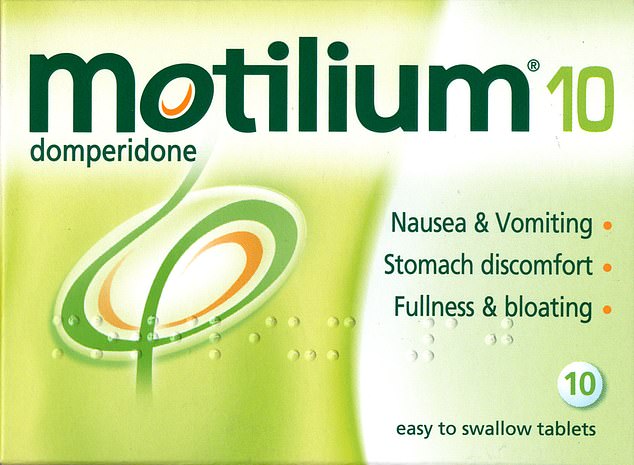 Domperidone, which is also known by the brand name Motilium, stabilises the rhythm of the electrical signals in our stomach muscles

But in the final condition when the volunteers were no longer being incentivised, volunteers who had received domperidone spent significantly longer than the placebo group looking at the disgusting images.

By the end, people in the placebo group looked at the neutral image roughly 5.5 seconds more than the disgusting image, but under the influence of domperidone, the difference was only about 2.5 seconds.

Domperidone made no difference to how disgusting the volunteers rated the images to be, meanwhile.

But the study presents evidence that the drug reduces disgust avoidance following a long period of exposure to the disgusting stumuli, in which people have been motivated to look at it.

‘We’ve shown that by calming the rhythms of our stomach muscles using anti-nausea drugs, we can help reduce our instinct to look away from a disgusting image,’ said Professor Tim Dalgleish at the University of Cambridge.

‘But just using the drug itself isn’t enough – overcoming disgust avoidance requires us to be motivated or incentivised.

‘This could provide us with clues on how we can help people overcome pathological disgust clinically, which occurs in a number of mental health conditions and can be disabling.’

The study has been published in Current Biology. 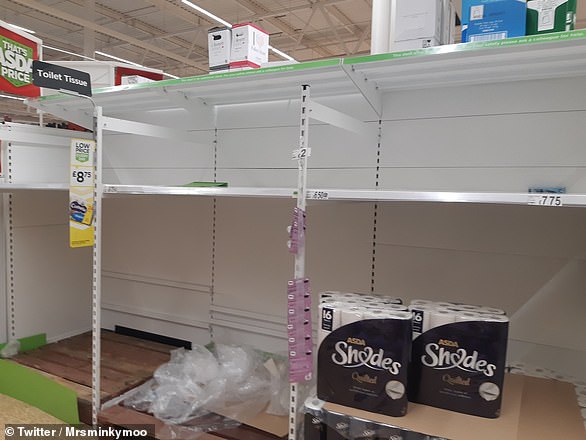 Shoppers around Britain were lucky to get their hands on toilet paper from the major supermarkets in March and April. Pictured, depleted shelves at an Asda

A ‘built-in alarm system’ that keeps us safe from danger could be the reason for people mass-buying toilet roll during the coronavirus, a psychologist said in March.

As people become scared by the thought of catching coronavirus, their sensitivity to disgust increases, says Dr Steven Taylor at the University of British Columbia.

This causes them to buy products to keep them clean in large quantities – not just toilet paper but disinfectant wipes and hand sanitisers.

Dr Taylor, who specialises in behaviour during pandemics, called toilet paper in particular ‘a conditioned symbol of safety’ that alleviates a fear of getting the virus.

Dr Taylor at the University of British Columbia’s Department of Psychiatry released his book ‘The Psychology of Pandemics’ before the outbreak was first identified in Wuhan, China.

‘In a pandemic, people are more likely to experience the emotion of disgust and are more motivated to avoid it,’ Dr Taylor told the Times.

‘In that sense, the purchase of toilet paper makes sense because it is linked to our ability to avoid disgusting things. It’s not that surprising.

‘In psychology research, it is called a conditioned safety signal – it’s almost like a good luck charm or a way of keeping safe.

‘This type of behaviour is very instinctive and prominent in pandemics.’