EXPRESS INFORMER > Travel > See the flowers at the Keukenhof garden in Holland virtually, thanks to photographer Albert Dros

Photographer’s stunning snaps and a virtual tour mean you can still marvel at the 7million blooms in the Keukenhof garden, despite it being shut for the first time in 71 years

The Keukenhof flower garden in Holland, with its seven million spring-flowering bulbs, boasts with some justification that it’s the most ‘beautiful spring garden in the world’.

But for the first time in its 71-year history, it’s closed, as a result of the coronavirus lockdown.

However, its magnificent blooms can still be seen in all their multi-coloured glory – virtually – thanks to Dutch photographer Albert Dros, who was given exclusive access to the site in Lisse, also known as the Garden of Europe.

The 34-year-old has produced a stress-busting set of images of this year’s breathtaking displays.

And the garden itself has produced a superb 360-degree interactive video tour of its flower beds, which contain tulips, lilies, roses, daffodils and more.

Talking about taking the snaps, Albert told MailOnline Travel: ‘It was really surreal. I occasionally walked around without taking any pictures. Just hearing the sound of the birds and the water was so relaxing. And the smell was just amazing. It was total zen. Taking away the crowds really gave this a next-level experience.’ Scroll down to immerse yourself in the beauty of the flowers… 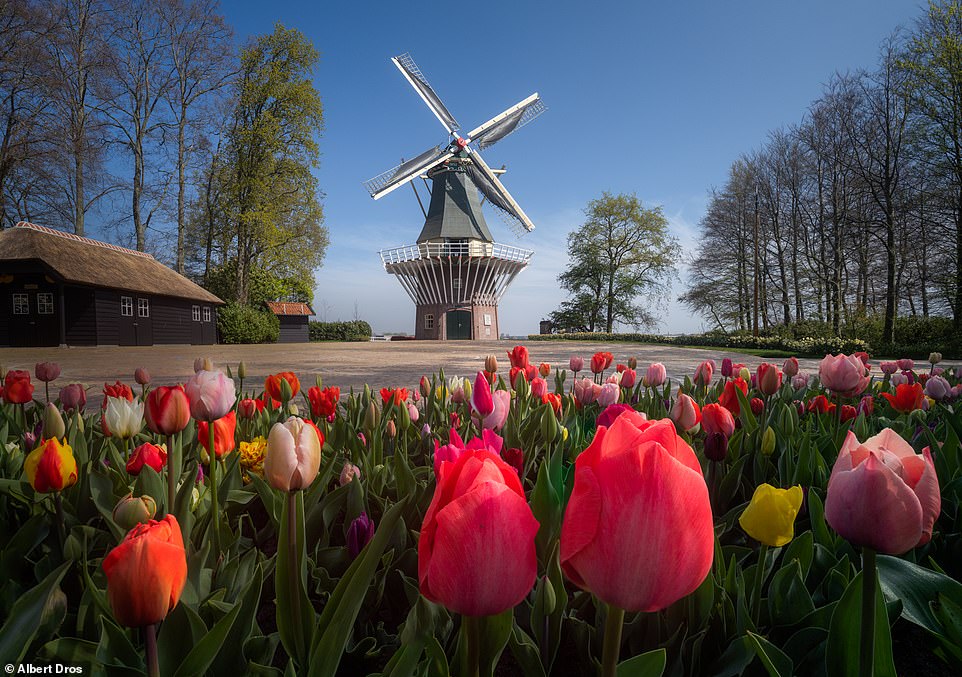 The famous Keukenhof windmill in an image taken by Albert Dros, who was given exclusive access to the closed Keukenhof garden. He said the miller moved the sails into the most eye-catching position for his snap 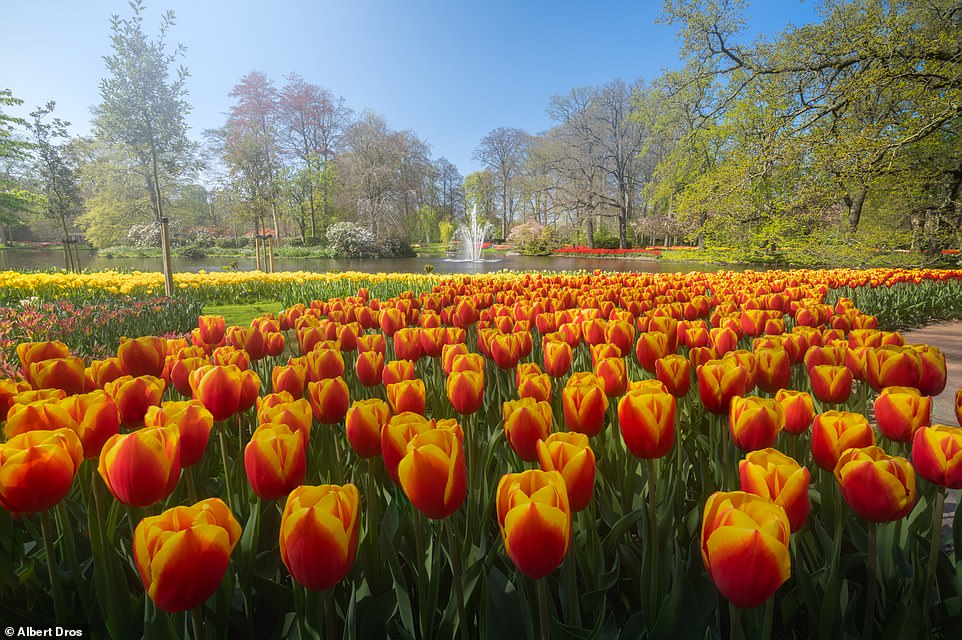 In this part of the park, orange tulips surround a serene pool, which has a fountain in the middle. April is the best time to see the tulips in bloom 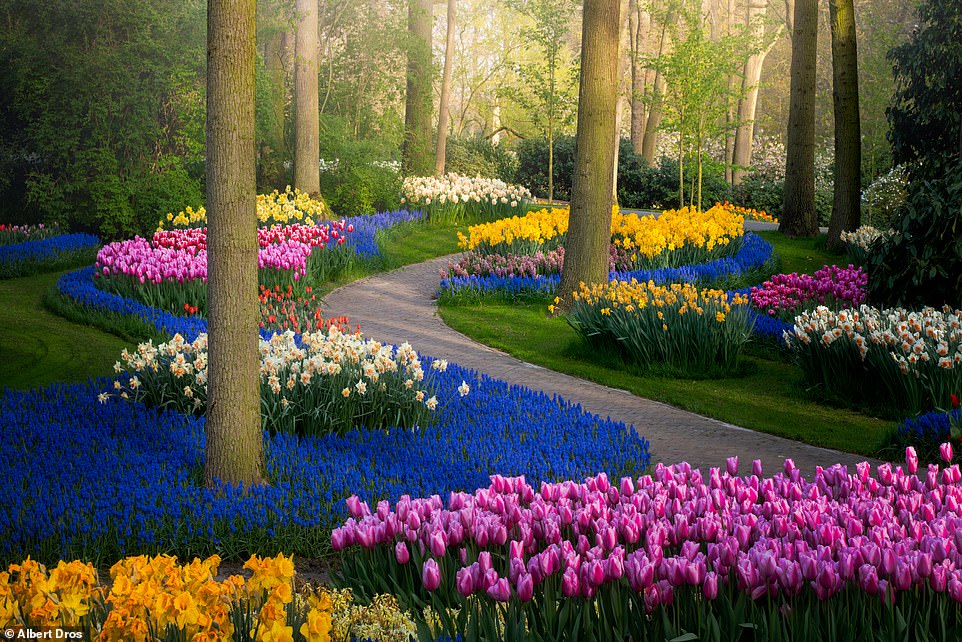 Each year, around seven million bulbs are planted at Keukenhof to create the spectacular flower displays 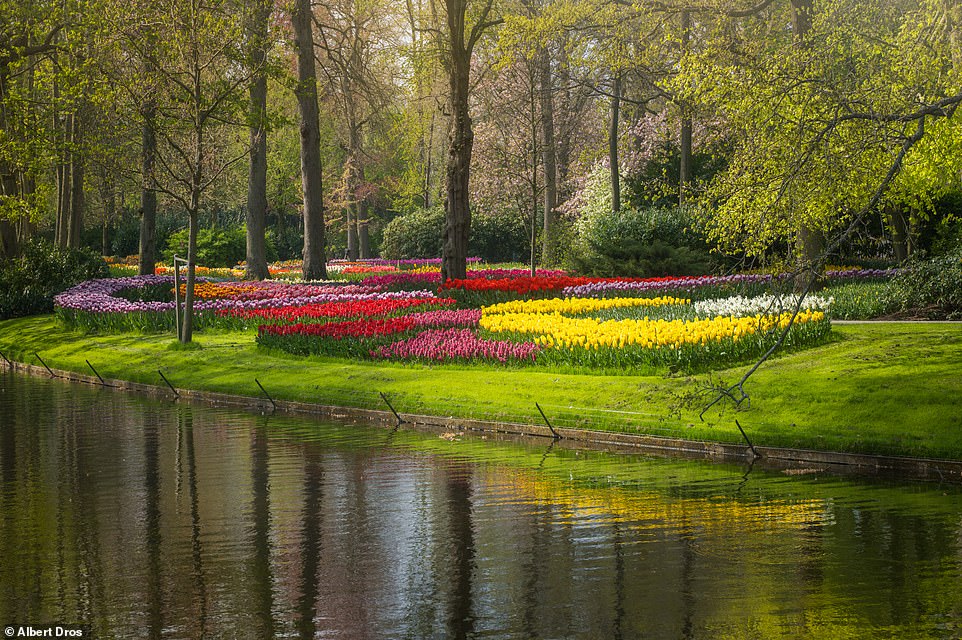 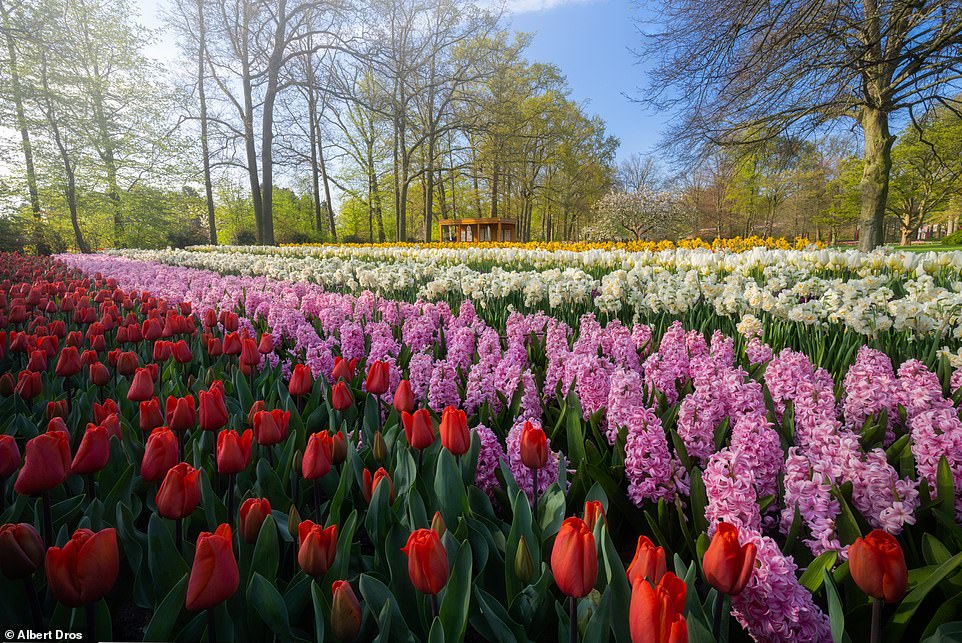 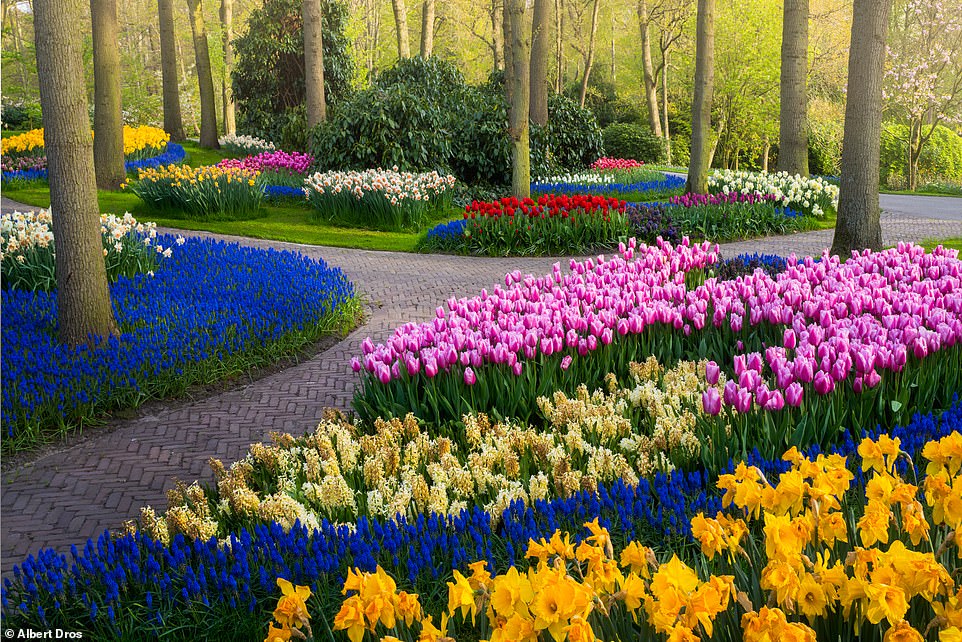 Keukenhof is best-known for its tulips but also features other flowers including daffodils, lilies and roses 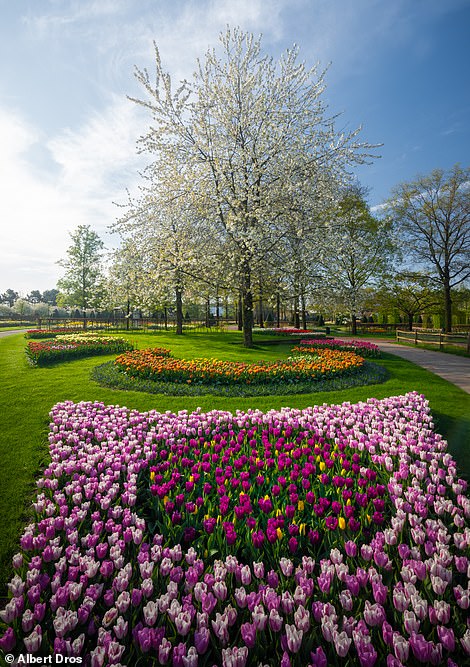 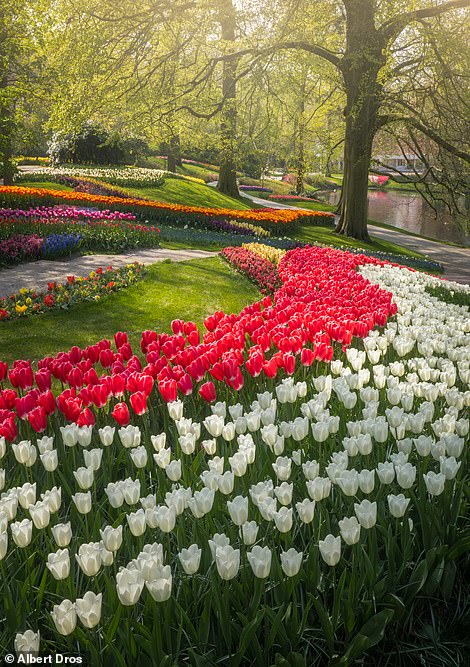 Describing taking the images, Albert said: ‘It was really surreal. I occasionally walked around without taking any pictures. Just hearing the sound of the birds and the water was so relaxing’ 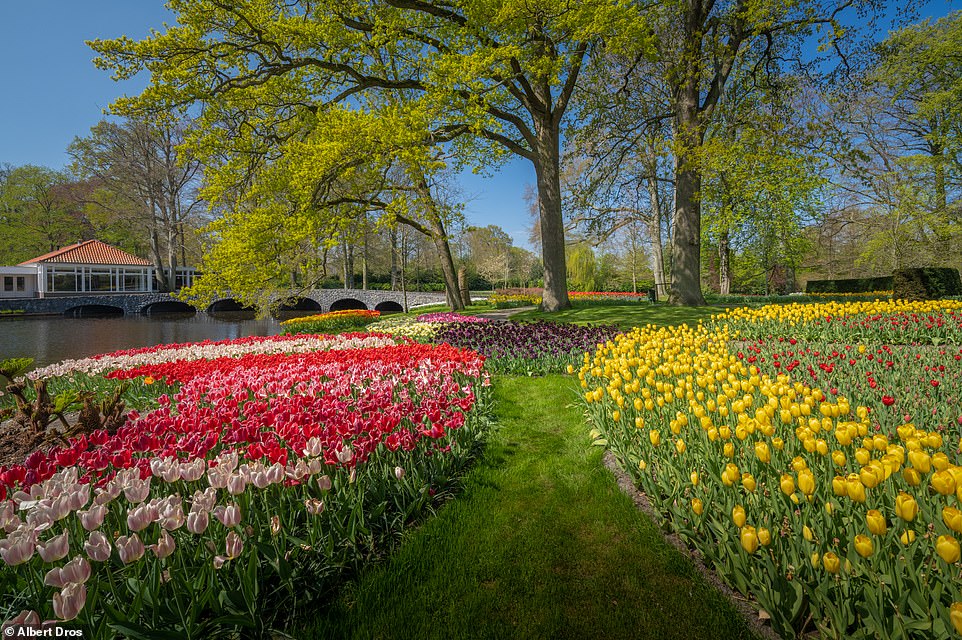 Keukenhof opens to the public for eight weeks between March and May each year and last year welcomed 1.5million visitors 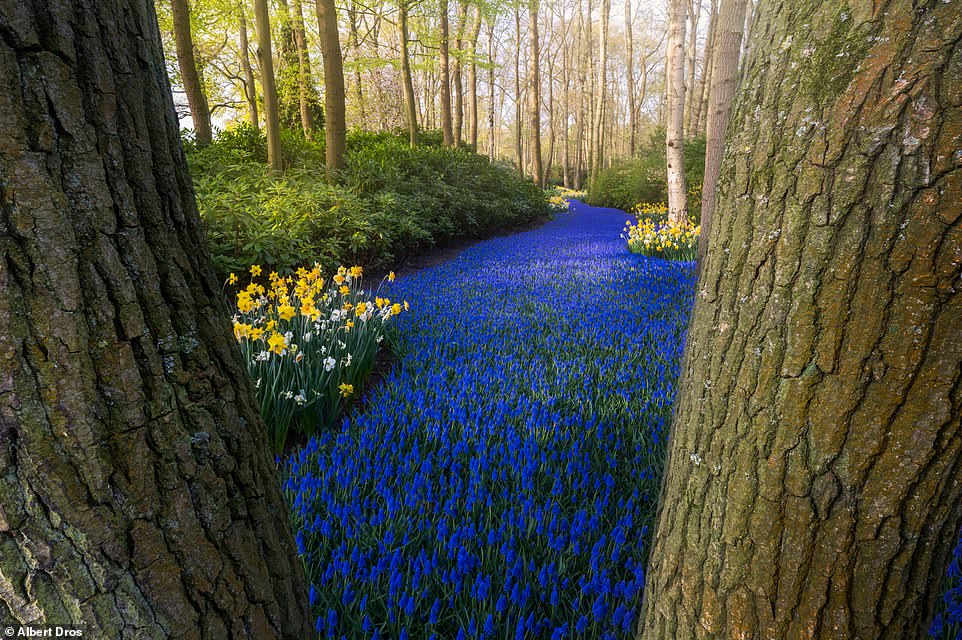 The world-famous ‘Blue River’ at Keukenhof, which is a display of blue grape hyacinths that zigzag through the trees 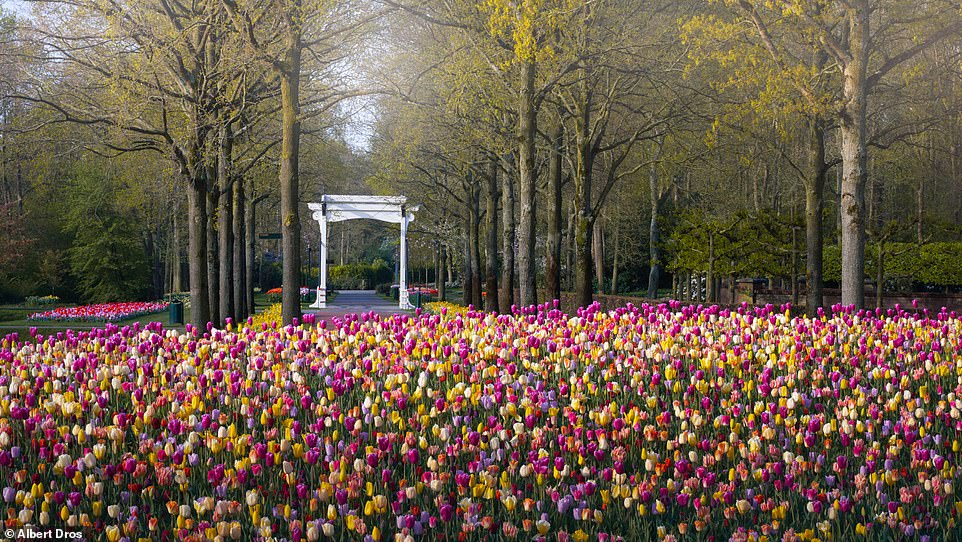 Planting at the garden starts in early October and is usually completed by December. The flowers begin to bloom in spring 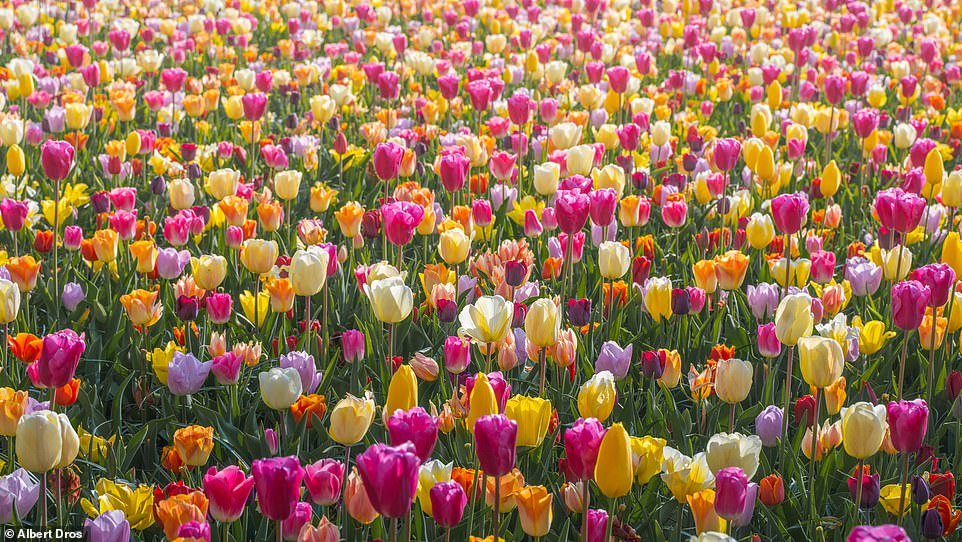 Albert said: ‘Taking away the crowds really gave this a next-level experience. But even with the crowds, this garden is magical’ 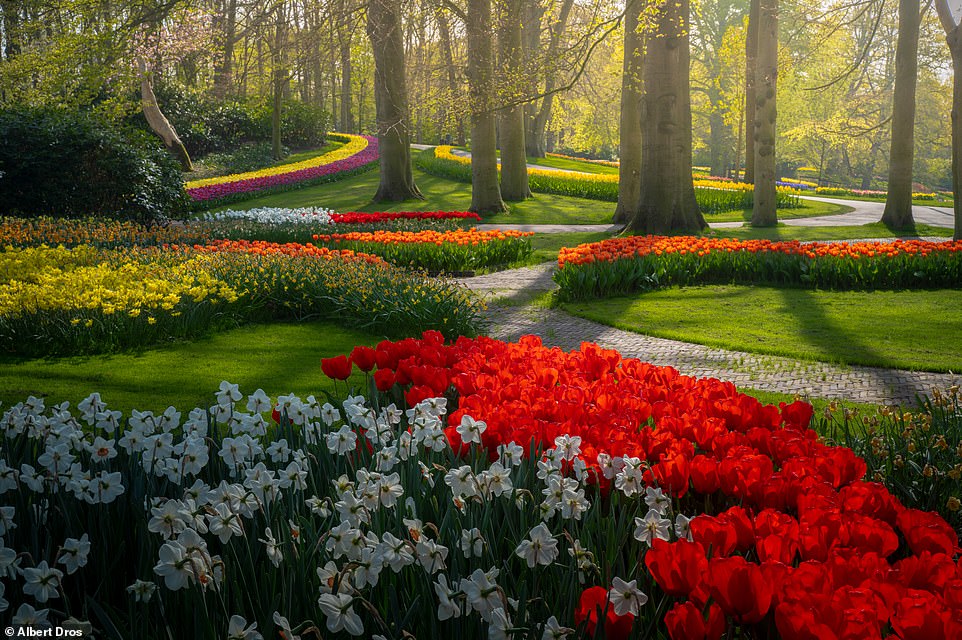 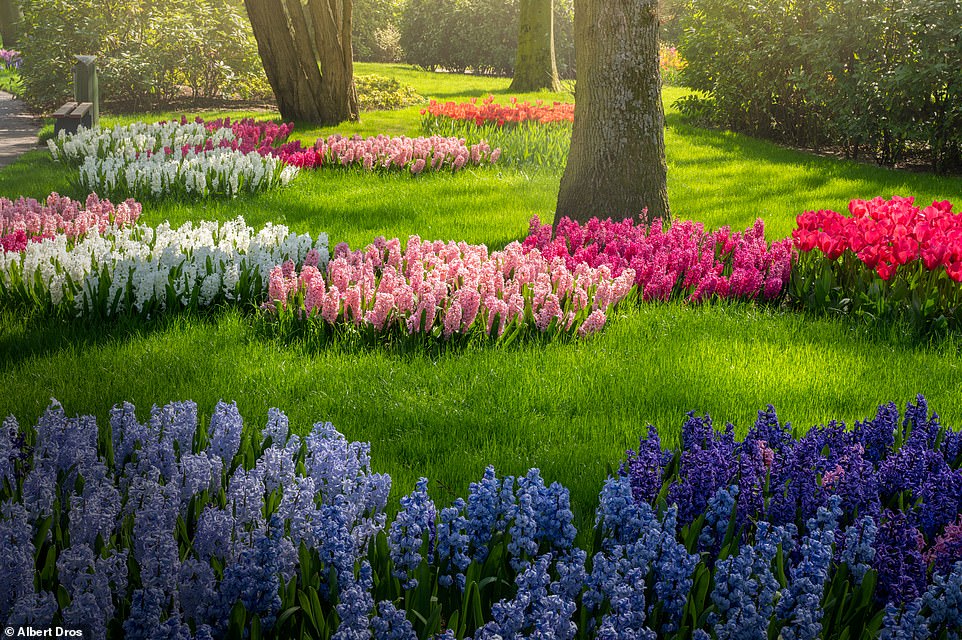 Keukenhof dates back to the 15th century. Then it was used as a fruit and vegetable garden for the kitchen of Teylingen Castle 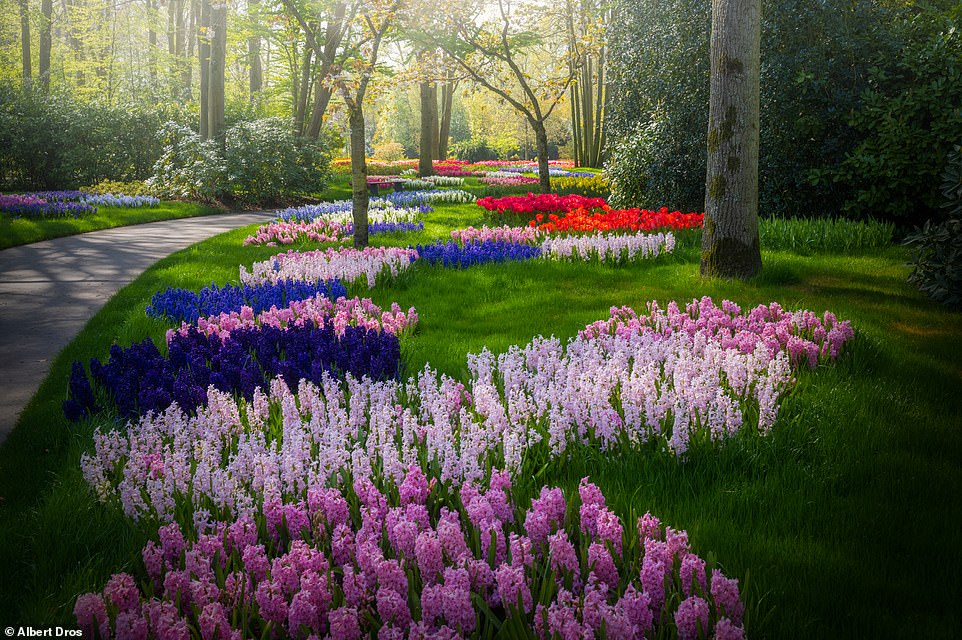 The theme of the display this year at Keukenhof is ‘A World of Colours’, demonstrated perfectly right here 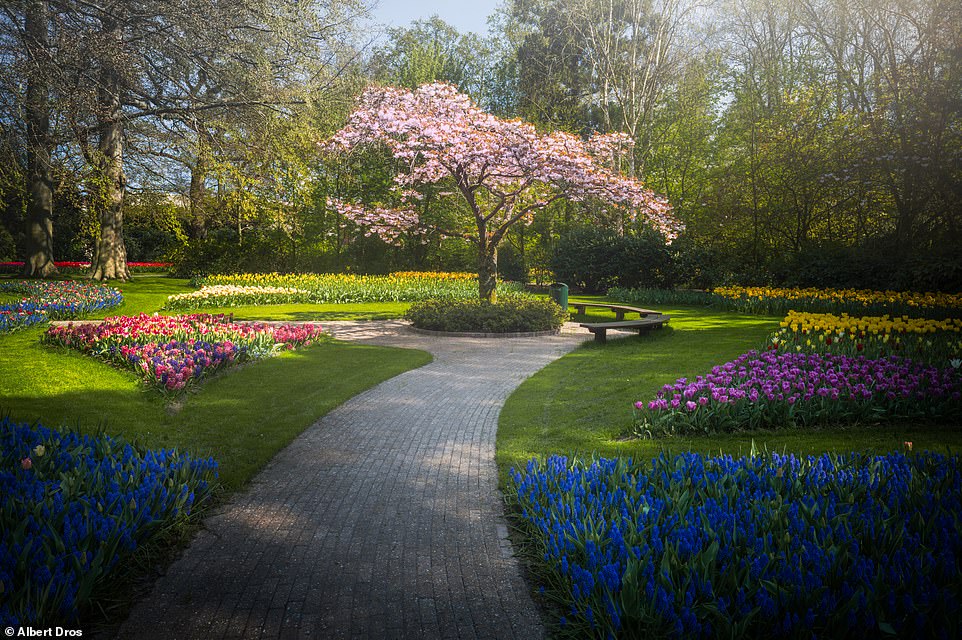 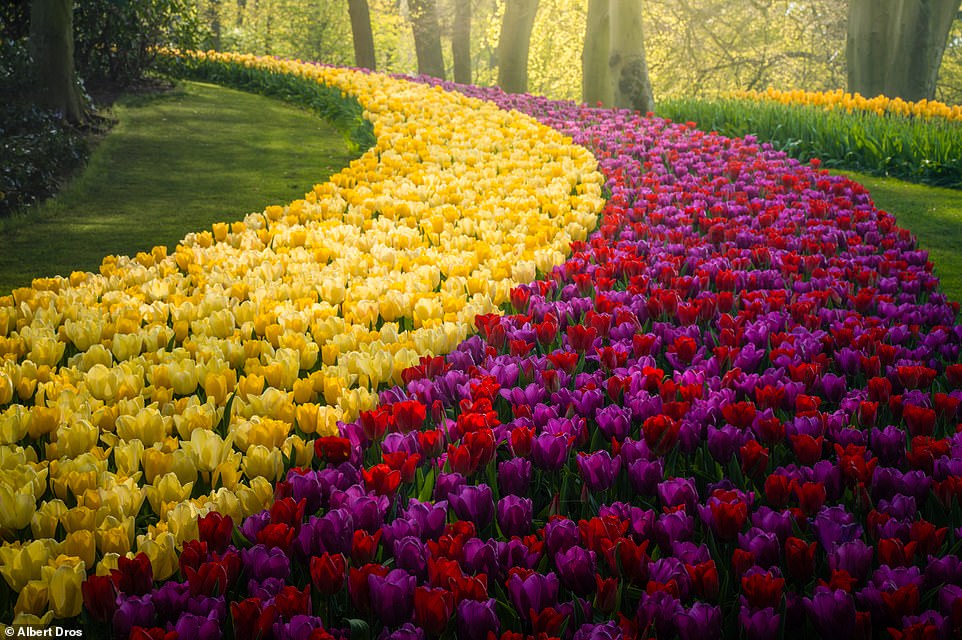 Albert says that when entering Keukenhof, he was ‘just amazed how everything was taken care of and all the details were there’ 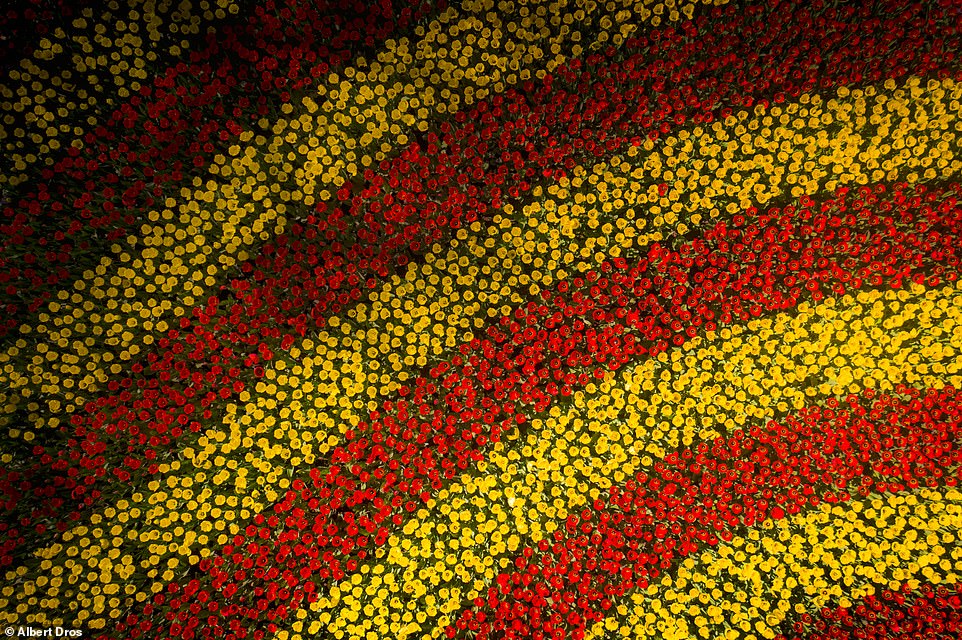 Another drone shot that Albert took in the garden. Usually drones are banned, but Albert was given permission to use his