You won’t find a single tourist trap in this book – only wonders of the planet ‘that will come to define your bucket list’.

Beautifully illustrated with 180 photographs, Hidden Places – From Secret Shores to Sacred Shrines by Claudia Martin, published by Amber Books, spotlights ‘hidden treasures and secret places’ to discover around the globe.

In the introduction to the book, Martin writes: ‘A world away from the museums of Paris, the skyscrapers of New York or the beaches of the Mediterranean, intrepid travellers can find strange and wonderful places that are little visited and little known.

‘Even in our buzzing, constantly switched-on world, there are still secret places waiting to be discovered with the same rush of surprise and joy as must have been felt by the travellers of long-past centuries.’

The book takes you from the remote Cape Wrath Trail in the Scottish Highlands to a fairytale town in Italy that can only be reached by footbridge, with other highlights including North America’s tallest sand dunes and an awe-inspiring gorge in Australia that’s decorated with aboriginal art.

CIVITA DI BAGNOREGIO, CENTRAL ITALY: Martin explains that the only way to reach the spectacular village of Civita di Bagnoregio is by a footbridge from the neighbouring town of Bagnoregio. She says: ‘The clay and tuff crag on which the village balances is prone to devastating erosion, earning the settlement the nickname of “The Dying City”‘ 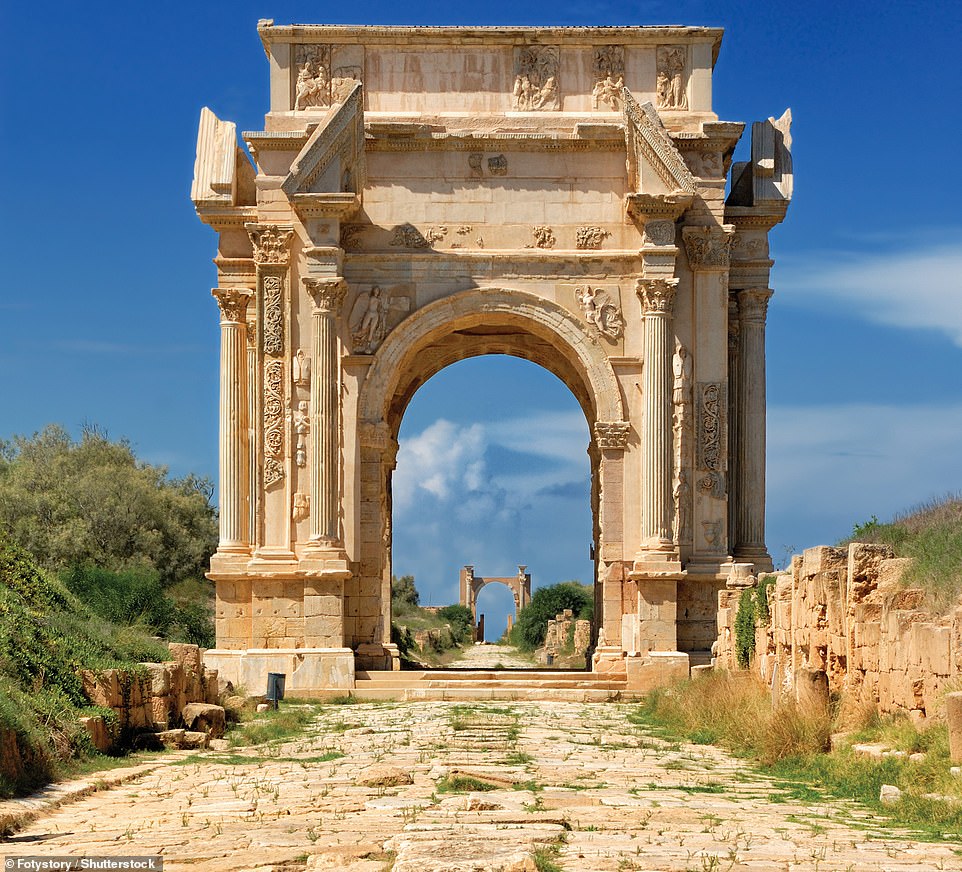 LEPTIS MAGNA, LIBYA: Martin explains that Leptis Magna was founded by the Phoenicians in the 7th century BCE and fell under Roman control after the defeat of Carthage in 146 BCE. The Roman emperor Septimius Severus was born in the city and he directed an ‘extensive building programme’ there, we learn, which included the ‘triumphal arch’ pictured above ‘on the occasion of his African tour in 203 CE’ 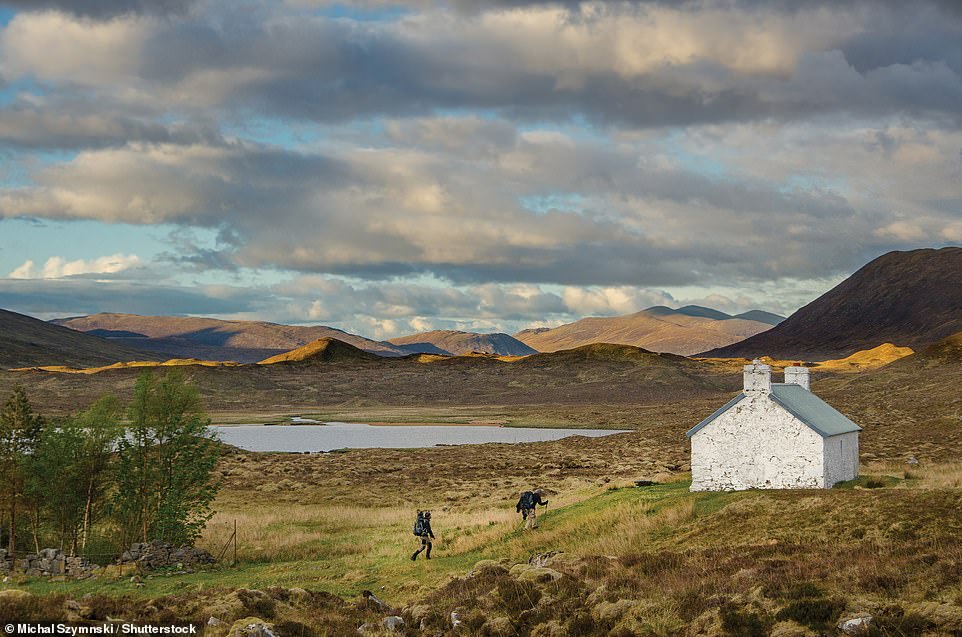 MAOL-BHUIDHE, CAPE WRATH TRAIL, SCOTLAND: ‘Running through the Highlands for 330km (205 miles) from Fort William to Cape Wrath, the Cape Wrath Trail is one of the United Kingdom’s most challenging and rewarding walks,’ says Martin. Describing the isolated structure in the picture above, which features on the route, she writes: ‘This bothy, south of Loch Calavie, is one of the most remote habitable dwellings in Scotland. It is left unlocked and ready to use by hikers’ 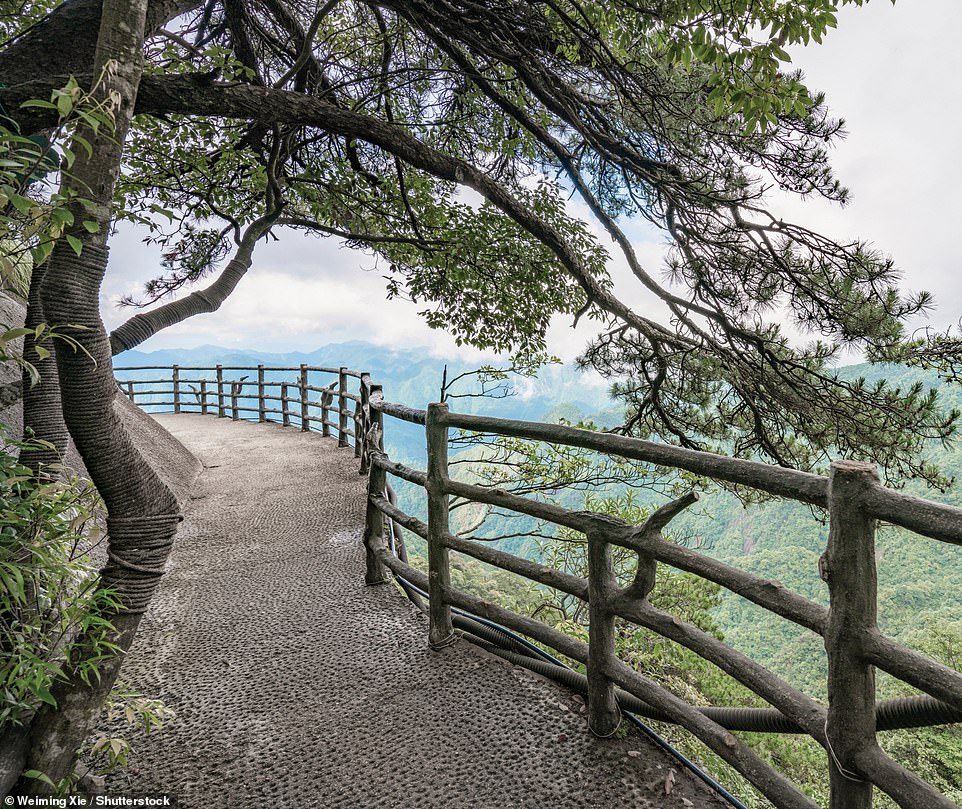 MOUNT SANQING, CHINA: The book explains: ‘This sacred mountain’s name means “Three Pure Ones”, in reference to its three summits, Yujing, Yushui and Yuhua, which symbolise the Taoist trinity, the three greatest gods in the pantheon.’ Martin adds that the mountain is ‘home to many rare plants, including the Chinese Douglas fir and countless bright rhododendrons’ 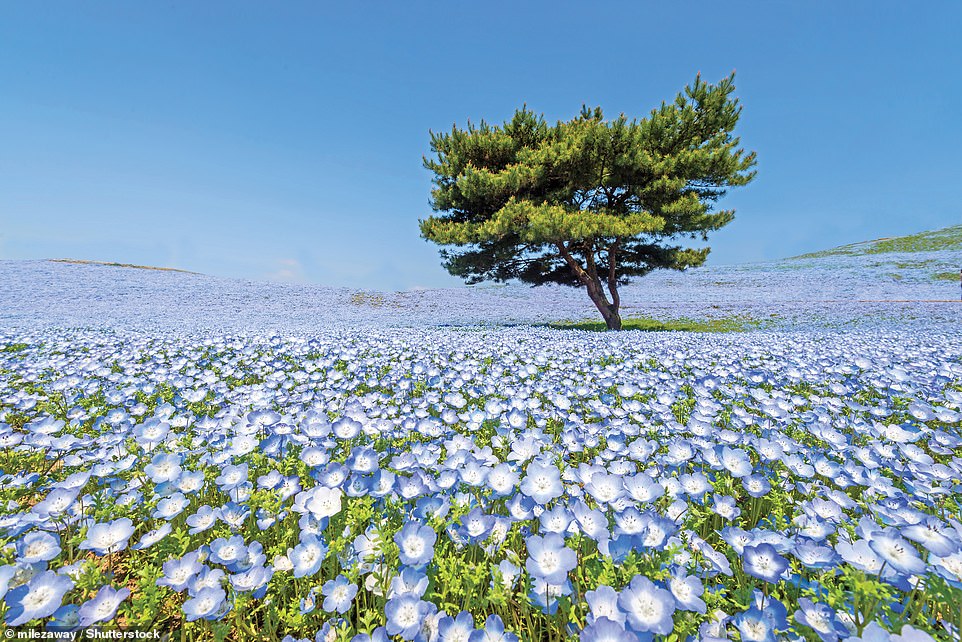 HITACHI SEASIDE PARK, JAPAN: Martin writes: ‘Each spring, local people flock to this vast public park in the city of Hitachinaka to see the blooming of four and a half million baby blue-eyes flowers (pictured). Summer brings poppies, zinnias and sunflowers; autumn offers Kochia and cosmos flowers; while winter is the turn of ice tulips.’ The author adds that there’s a small amusement park within the Hitachi Seaside Park that boasts a 100m- (328ft) tall Ferris Wheel 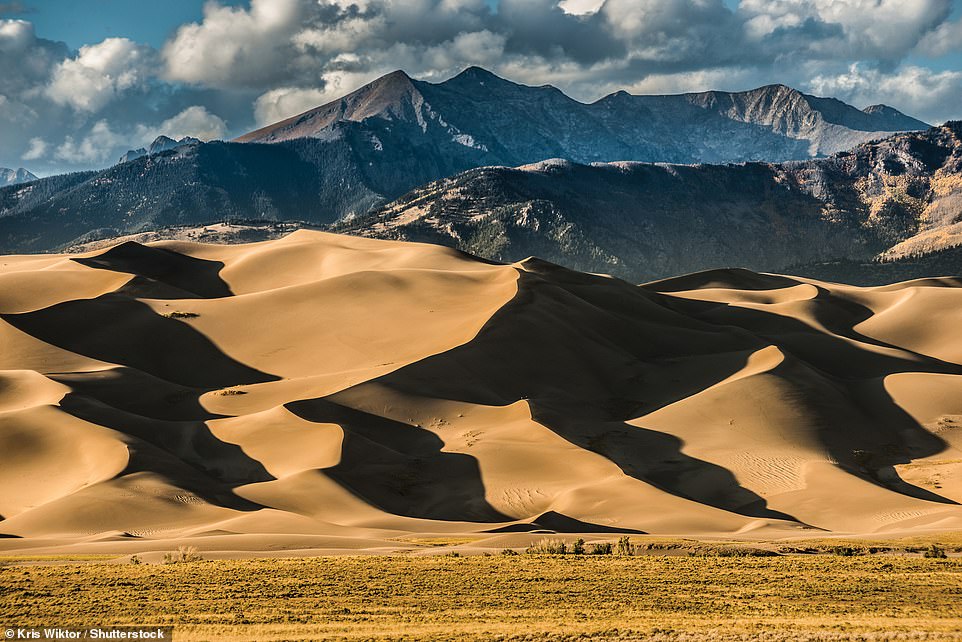 GREAT SAND DUNES NATIONAL PARK, COLORADO, USA: This national park protects North America’s tallest sand dunes, which soar up to 230m (750ft) in height, Martin reveals. She continues: ‘The formation of the dunes took place over millions of years. First, sediment from the surrounding mountains was washed into lakes covering the valley floor. After the climate dried and warmed, causing the evaporation of the lakes, the exposed sand was blown into dunes by the prevailing southwesterlies’ 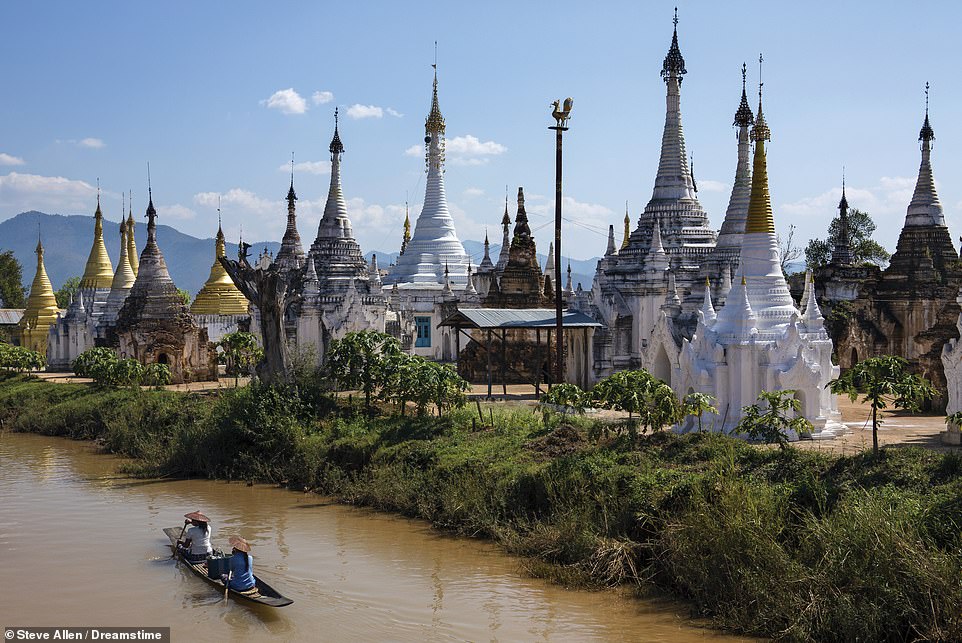 AUNG MINGALAR, INLE LAKE, MYANMAR: The book reveals that Myanmar has ‘countless’ stupas – ‘bell-shaped, tiered structures [such as the ones pictured], often known as pagodas, that house sacred relics, including those associated with the Buddha and arhats (enlightened people)’. It notes that more than 1,479 of the country’s stupas exceed 8.2m (27ft) in height 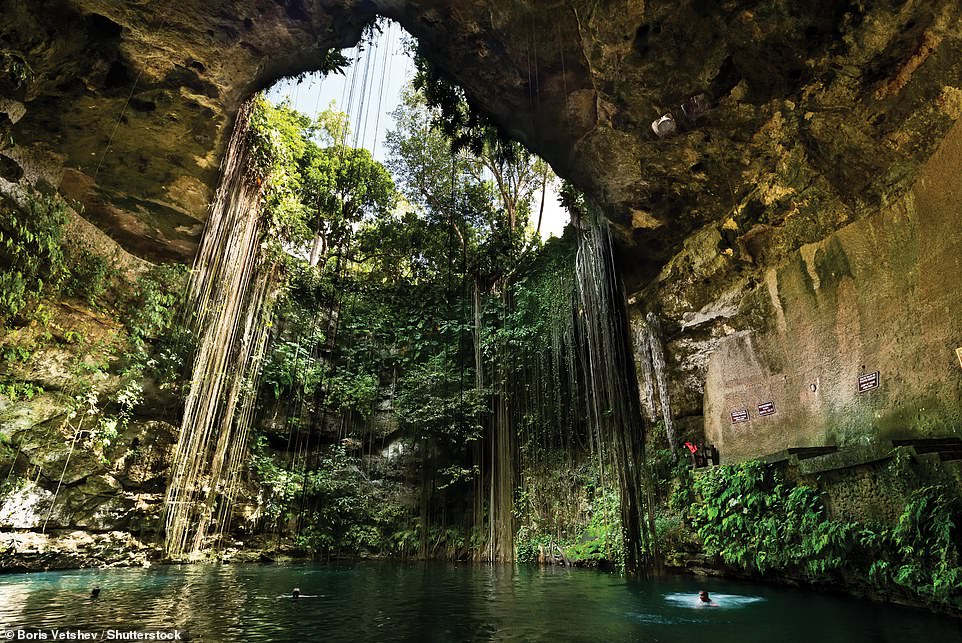 IK KIL CENOTE, YUCATAN PENINSULA, MEXICO: ‘Close to the Mayan city of Chichen Itza, this cenote was sacred to the Maya people, who used it for sacrifices to the rain god, Chaac,’ the book says. It explains that a cenote is a ‘sinkhole formed by the collapse of limestone bedrock, exposing groundwater’. Martin notes that ‘there are at least 6,000 cenotes in the karst of the Yucatan Peninsula, many of them suitable for swimming and scuba diving’ 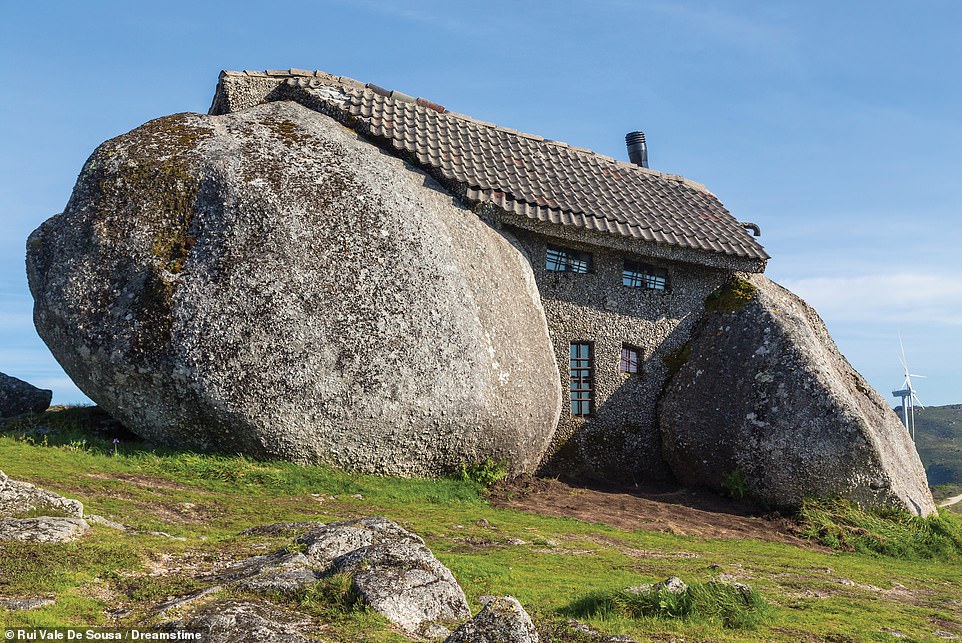 CASA DO PENEDO, PORTUGAL: This eye-catching structure is located between Celorico de Basto and Fafe in the northern Portuguese district of Braga. Martin explains that it was built between 1972 and 1974, ‘using four large boulders for portions of its walls and foundation’. She says: ‘Despite being next to a wind farm, the house has no electricity supply’

LAUTERBRUNNEN, SWITZERLAND: ‘Overlooked by the Eiger and Jungfrau, Lauterbrunnen lies at the bottom of a deep, U-shaped valley, less than one kilometre (0.6 miles) wide,’ Martin says of this picture-perfect village. ‘To the west, Staubbach Falls plunges 297m (974ft) from a hanging valley,’ she reveals. The book notes that in 1779, the German poet Johann Wolfgang von Goethe wrote his poem ‘Song of the Spirits over the Waters’ after visiting the falls 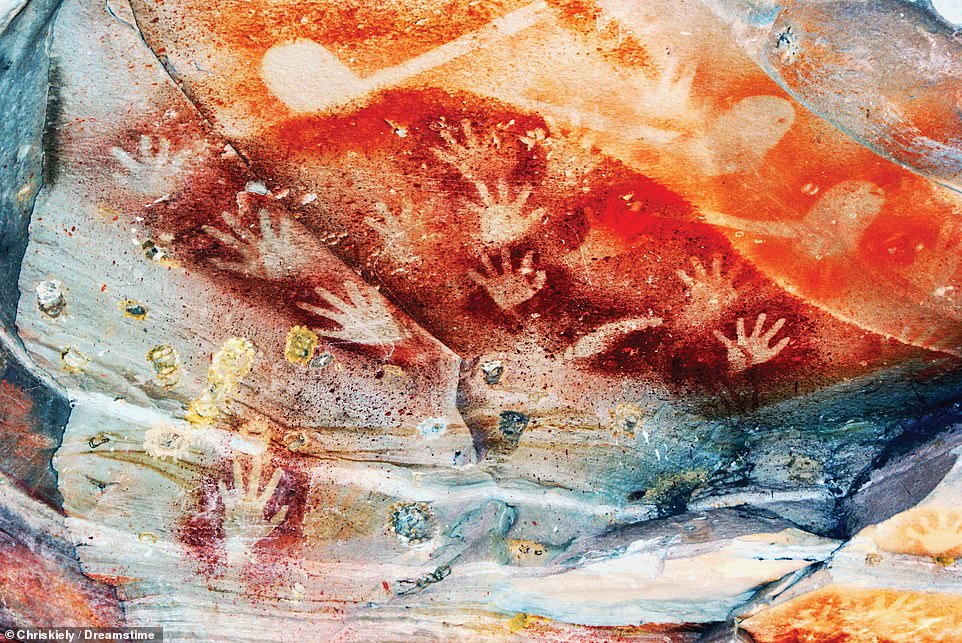 CARNARVON GORGE, AUSTRALIA: Detailing this spectacular aboriginal artwork, Martin says: ‘In central Queensland, Carnarvon Gorge is significant to the Bidjara, Karingbal and Kara Kara peoples, the rock art on the gorge’s sandstone walls testament to their long histories.’ The book reveals that the artwork is predominantly stencil art, ‘created by blowing watery ochre pigment over an object held against the wall, such as a hand, boomerang, shield or axe’. It adds that the oldest sites in the gorge have been in use for over 3,000 years

REINE, LOFOTEN ARCHIPELAGO, NORWAY: ‘The fishing village of Reine is on the glacier-carved island of Moskenesoya,’ writes Martin. The author says that though the Lofoten Islands sit above the Arctic Circle, they have ‘mild winters due to warming by the North Atlantic Current’. She adds: ‘In recent years, the islands have become a surfing destination, particularly around Unstad Beach on Vestvagoy’ 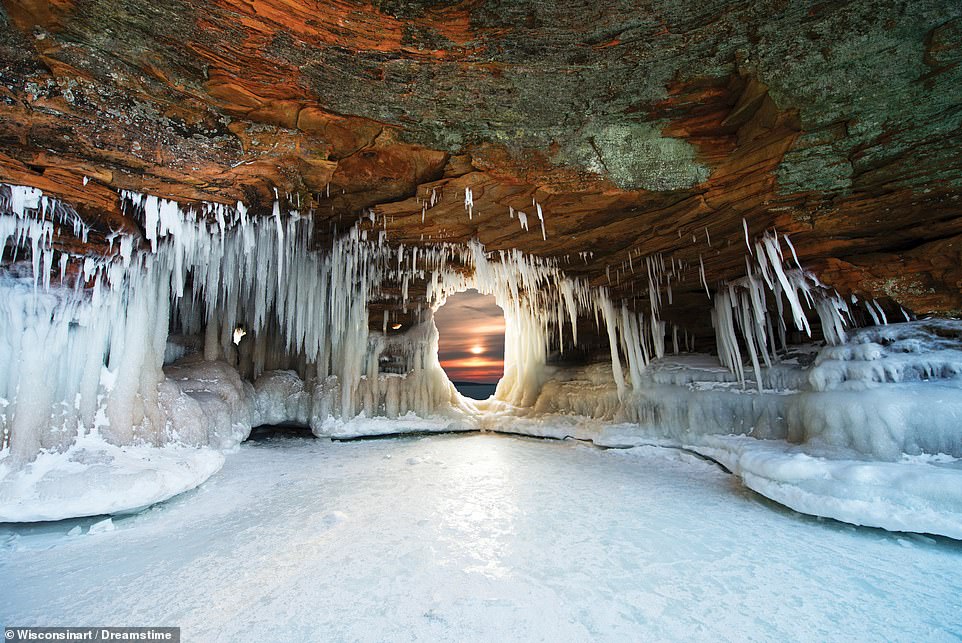 APOSTLE ISLANDS, WISCONSIN, USA: The 22 Apostle Islands, which lie in the southwestern reaches of Lake Superior, are ‘blanketed by coniferous forest and roamed by plentiful black bears’, Martin reveals. She continues: ‘In winter, the wave-carved caves (pictured) of Devils Island and Sand Island are decorated with frozen waterfalls and delicate icicles. In some years, the lake freezes solid enough for the Park Service to allow people to walk to the caves from Meyers Beach on the Wisconsin shore’ 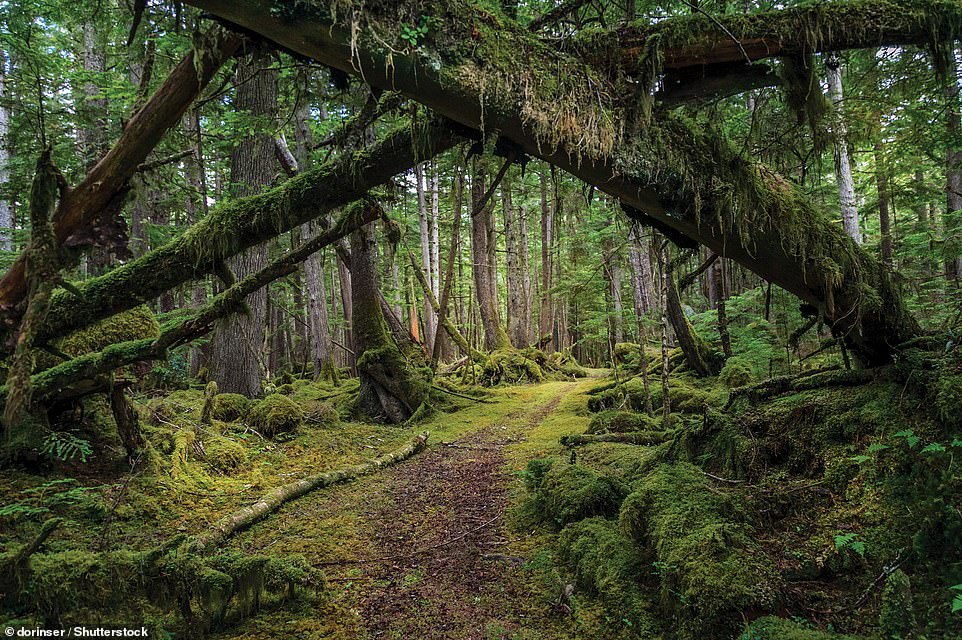 BOWEN ISLAND, BRITISH COLUMBIA, CANADA: This isle is reached by a short ferry or water taxi ride from Horseshoe Bay in West Vancouver, Martin reveals. She says that Bowen Island is known as Nexwlelexm in the Squamish language, a language spoken by the indigenous Squamish people of the Pacific Northwest. ‘The island’s hiking trails wind through secondary forest where blacktail deer wander, stopping off at coves where seals and otters are the only company,’ the book notes 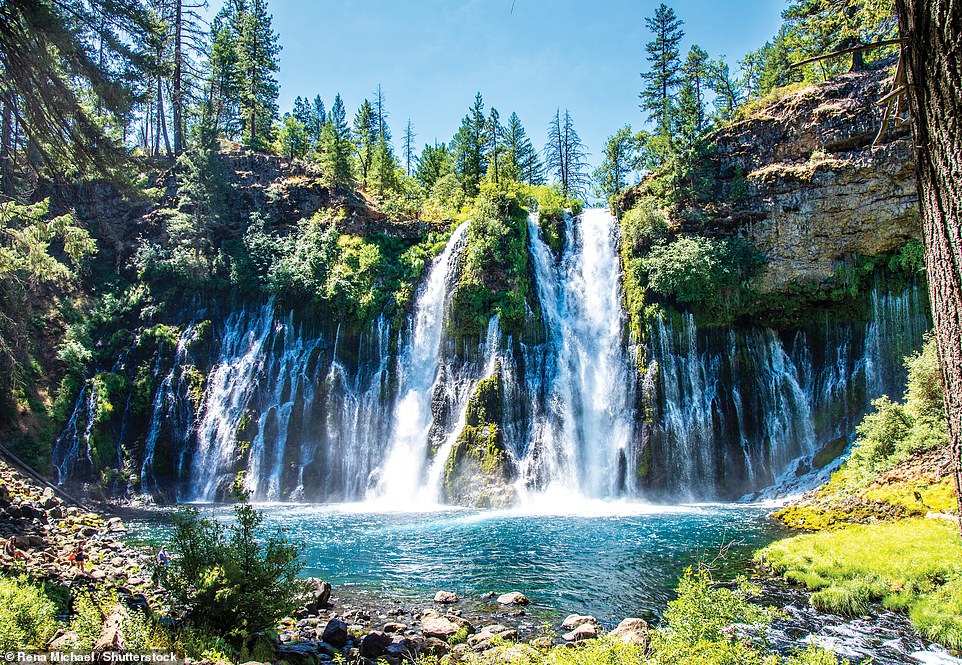 BURNEY FALLS, CALIFORNIA, USA: The book says: ‘These falls on Burney Creek, a tributary of the Pit River, were declared the “Eighth Wonder of the World” by President Theodore Roosevelt.’ When is the best time to visit? Martin explains that the falls ‘are fed by snowmelt in spring, making them most dramatic from April to October’. She adds: ‘Despite its icy temperature, the plunge pool is popular for catch-and-release flyfishing of rainbow, brown and brook trout’

DARVAZA GAS CRATER, TURKMENISTAN: This 69m- (226ft) wide crater in the Karakum Desert has been blazing since 1971, Martin reveals, earning it the nickname ‘Door to Hell’. How did it appear? Martin explains: ‘The most widely believed story concerning its provenance is that Soviet geologists were exploring this vast natural gas field when the ground beneath their drilling rig collapsed. They ignited the crater to stop the spread of methane gas – and it has burned ever since’ 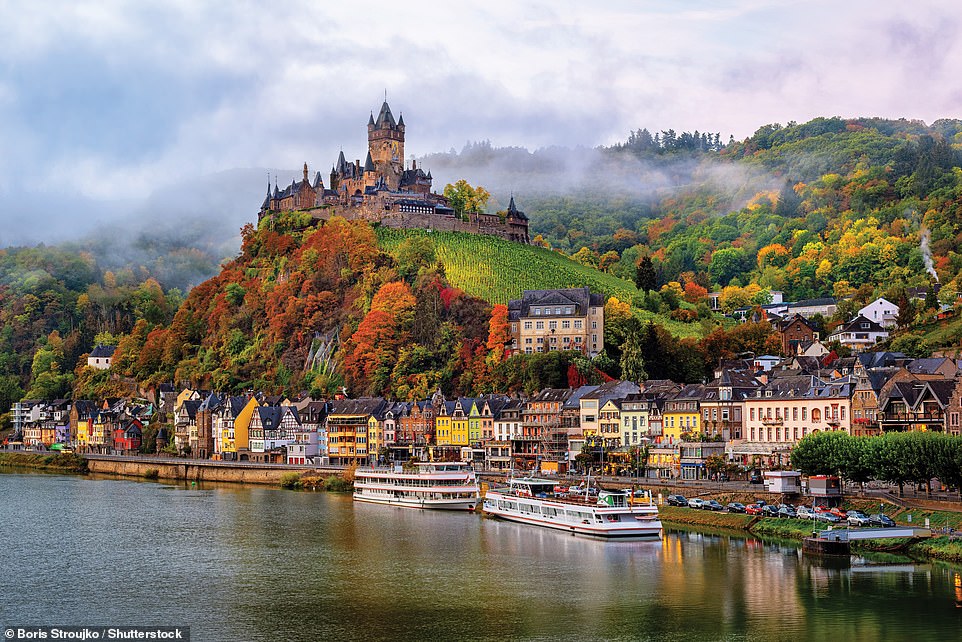 COCHEM, GERMANY: Of this picturesque town, Martin writes: ‘On the banks of the Moselle, the town of Cochem is watched over by its castle, which was first built in the 11th century.’ Delving into the history of the fortress, she continues: ‘In 1689, the castle was blown up by French troops during the Nine Years War. After being purchased by a wealthy businessman in 1868, it was rebuilt in Gothic Revival style’ 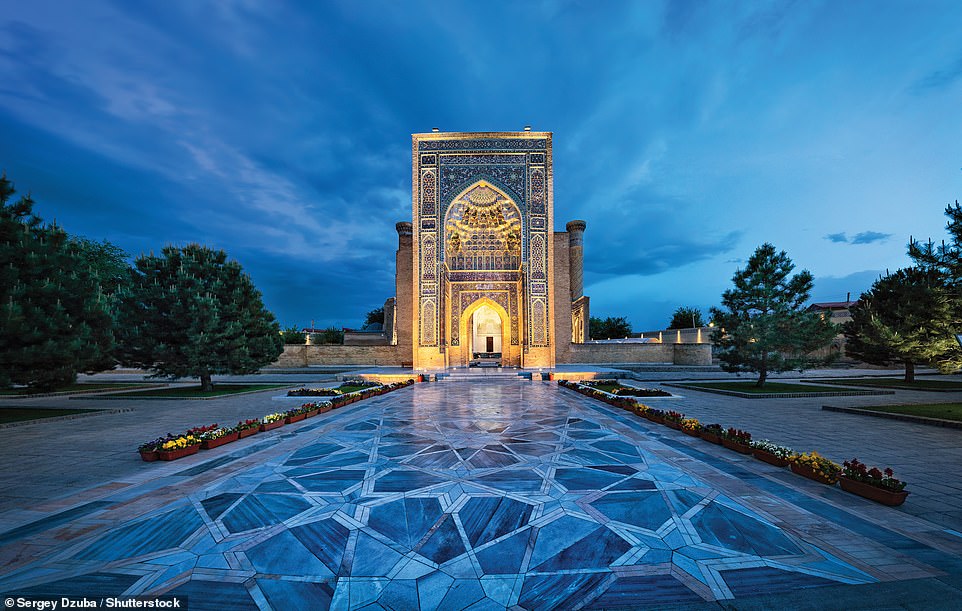 GUR-E-AMIR, SAMARKAND, UZBEKISTAN: ‘Thanks to its location on the Silk Road between China and Europe, Samarkand was one of Asia’s largest cities by the 14th century, when the Turco-Mongol conqueror Timur made it his capital,’ the book explains. The city later became the  site of Timur’s family mausoleum, Gur-e-Amir (‘Tomb for the King’), which is pictured above. Martin says that the mausoleum ‘was a landmark of Central Asian architecture, inspiring many later tombs, including the Taj Mahal, which was built by one of Timur’s descendants, Shah Jahan’ 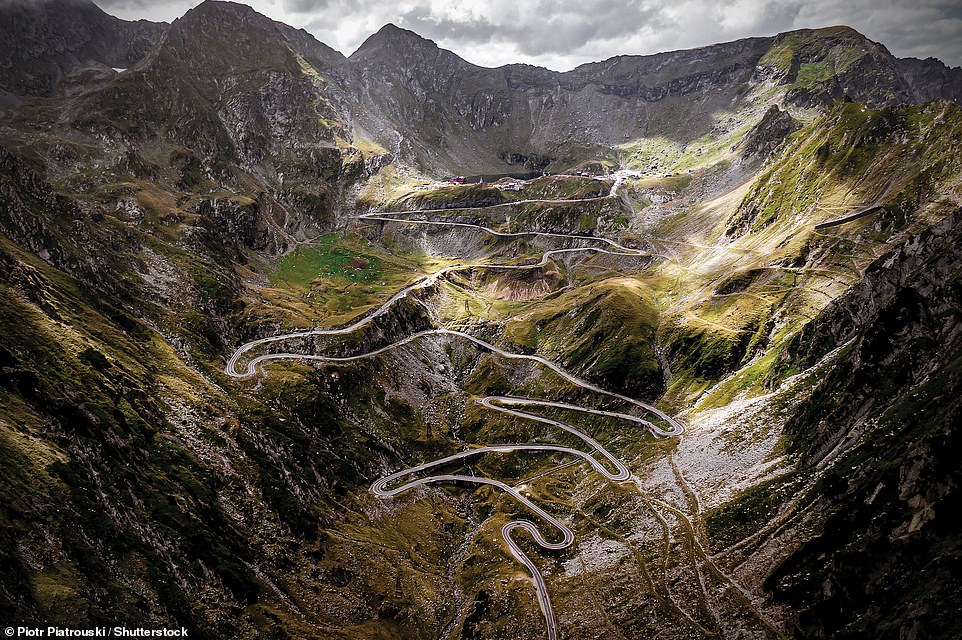 TRANSFAGARASAN HIGHWAY, ROMANIA: ‘Closed by snow between late October and June, this switch-backing road climbs to 2,042m (6,699ft) in the Fagarasș Mountains, giving access to the lovely glacier lake of Balea,’ the book reads. It says that the road was built by military personnel from 1970 to 1974, during the reign of the Romanian dictator Nicolae Ceausescu. Poignantly, the book notes that ‘official estimates put the number of deaths during construction at 40’ 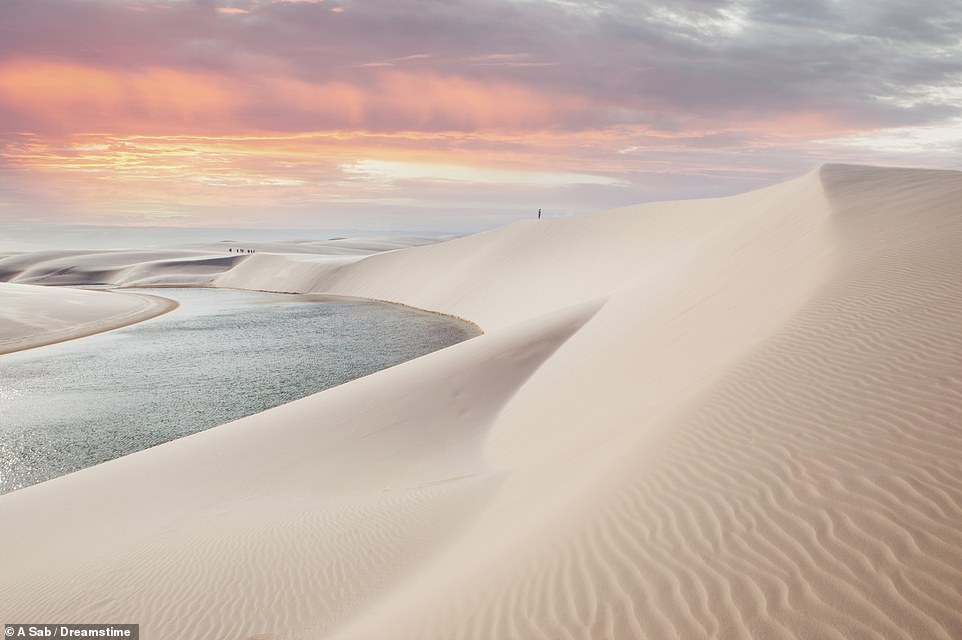 LENCOIS MARANHENSES NATIONAL PARK, BRAZIL: Martin says of this epic national park: ‘In the rainy season, the valleys between the dunes of this vast sand sea fill with rainwater, which is prevented from draining by the impermeable bedrock.’ The author reveals that the ‘interconnecting lakes are home to species such as the wolf fish, or trahira, which burrows into wet mud and remains dormant during the dry season’ 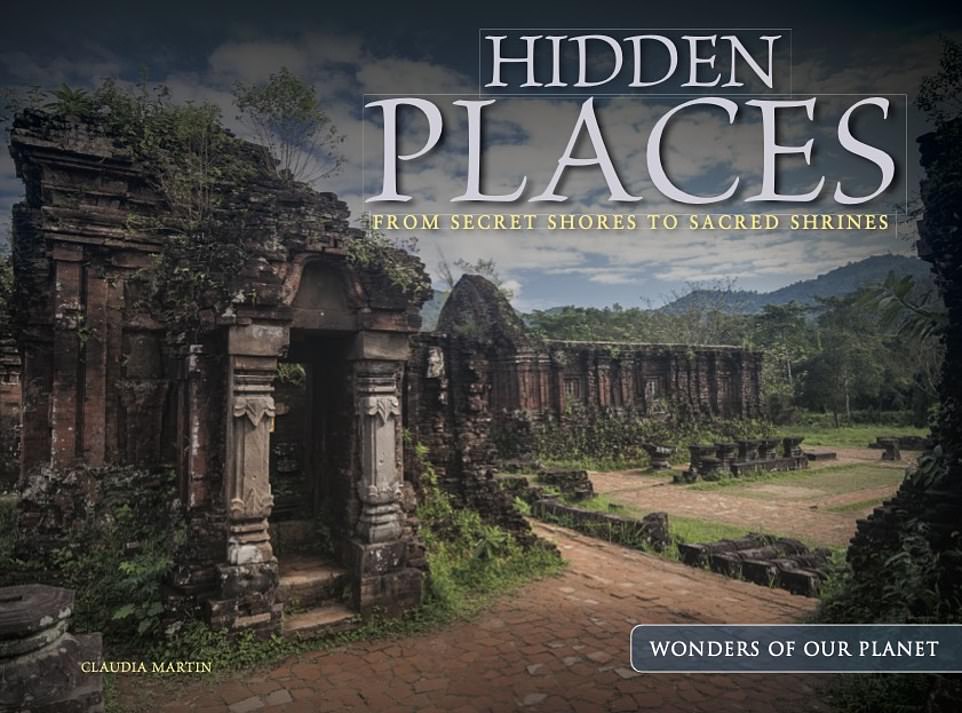