A ‘secret’ settlement has finally been reached over ‘Godfather of Soul’ James Brown’s multi-million dollar estate bringing to an end a high-profile legal battle between his children and girlfriend which rumbled on for 15 years.

Marc Toberoff, a lawyer for nine of Brown’s heirs including five children, the estate of one child, and three grandchildren, told DailyMail.com ‘all matters’ had been settled between the parties and that his clients were ‘very happy.’

‘All matters between James Brown’s children and Tommie Rae [Hynie] and Tommie Rae’s son have been settled with the estate,’ he said.

‘My clients are very happy that this final settlement has been reached and hope that the trust created by their father can soon be funded.’

He said he could provide no further details of the settlement.

The value of Brown’s assets is also unclear with estimates ranging from around $5million to $100million in recent years, as the star’s well-documented drug problems and financial mismanagement ate into his vast fortune.

While the terms of the deal and how the assets have been divided up remain under wraps, its conclusion paves the way for Brown’s dying wish to fund scholarships for disadvantaged children to finally be realized.

It comes one year after a judge ruled Brown’s longtime girlfriend Tommie Rae Hynie was not his legal wife because she was already married to another man when they wed in 2001 and thus she has no right to his fortune.

Brown’s estate has been at the center of one of the most bizarre and contentious legal battles in the entertainment industry ever since he died aged 73 back in 2006.

A ‘secret’ settlement has finally been reached over James Brown’s multi-million dollar estate bringing to an end a high-profile legal battle between his children and girlfriend which rumbled on for 15 years. James Brown on stage in Cannes, France in 1987 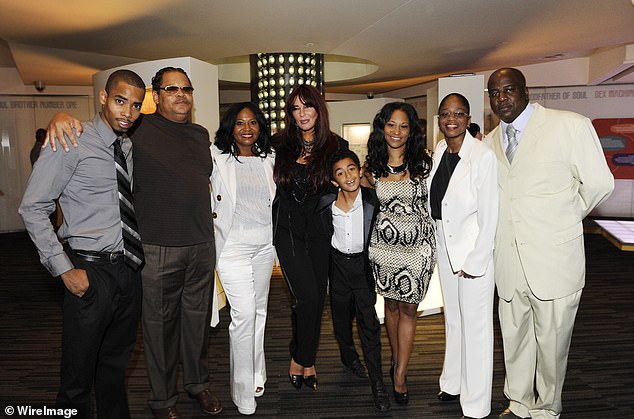 The agreement brought to an end two final disputes between Brown’s children and Hynie.

The first was the settlement of the federal lawsuit about the agreement reached between Hynie and the estate in 2009.

That agreement was made back when Hynie was regarded as Brown’s spouse, granting her a spousal share of his assets.

South Carolina’s then attorney general Henry McMaster – who is now the state governor – stepped in to facilitate the settlement which gave nearly half the estate to a charitable trust, a quarter to Hynie, and the rest to be split among his adult children.

It was first overturned in 2013 by the state’s high court before South Carolina’s Supreme Court ruled last year that Hynie was never legally married to him because she had failed to annul a previous marriage before wedding the star.

The ruling, which cannot be appealed, said this meant Hynie had no right to his multi-million dollar estate.

Brown’s children brought a federal lawsuit arguing her spousal rights to his estate should be overturned and claiming that the agreement was designed to dilute the children’s rights to their share of his song copyrights.

Brown had signed many deals during his life giving the ownership of songs to music publishers. 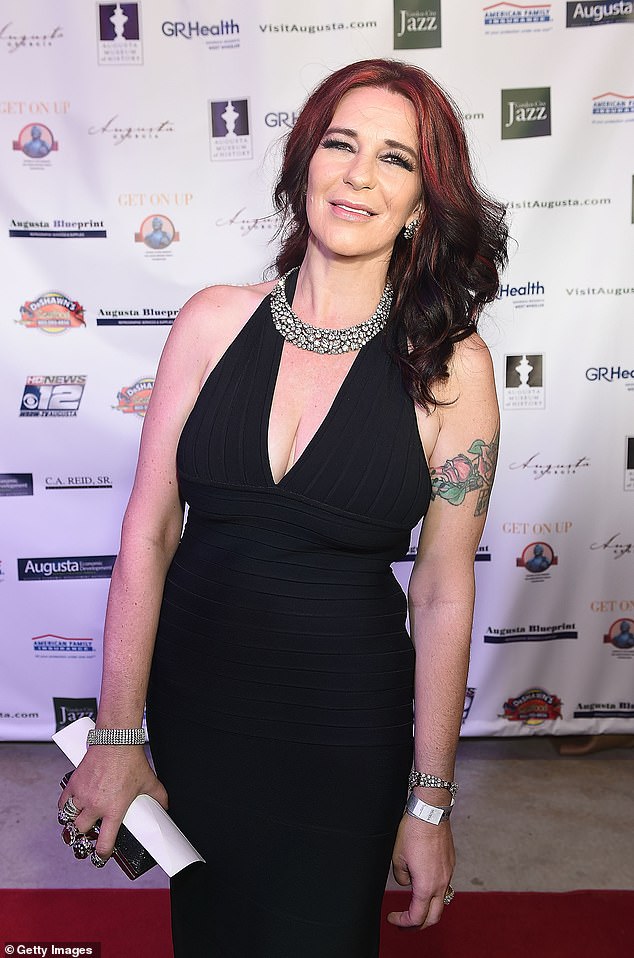 Tommie Rae Hynie is pictured attending the premiere of Get On Up in Georgia in 2014. The settlement comes one year after a judge ruled Brown’s longtime girlfriend Hynie was not his legal wife and so has no right to the Godfather of Soul’s fortune 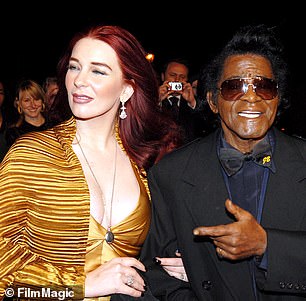 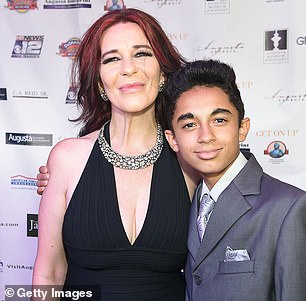 Brown and Hynie during the UK Music Hall Of Fame 2006 left. Hynie and the couple’s son James Brown II in 2014 right

Under federal law, termination rights mean that the artist – or their spouses and children after their death – can recover the ownership by terminating those deals.

Acting as his widow, Hynie struck copyright deals over his songs, gaining the rights to his music and then making money by signing the ownership back to publishing companies. 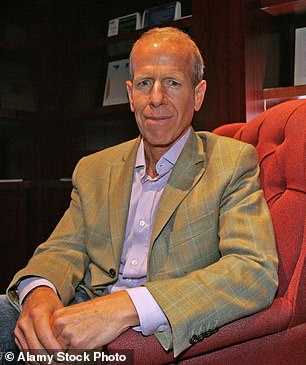 Marc Toberoff (above), a lawyer for nine of Brown’s heirs including five children told DailyMail.com ‘all matters’ had been settled

With Hynie no longer regarded as Brown’s spouse, the publishing rights to his songs will now be returned to his 10 children.

The second part of the settlement involved both parties reaching a global settlement so that there will be no further disputes between Hynie, Brown’s children and the estate.

Ownership of the star’s personal effects is also finally settled.

This means the estate can now fund the trust outlined in Brown’s will.

In his will, signed in 2000, Brown left most of his assets to create an ‘I Feel Good’ trust that would fund scholarships for disadvantaged children in South Carolina and Georgia.

However, a separate suit still ongoing by one of the estate’s former executors Adele Pope may still prevent the trust from creating the charity.

Neither Hynie nor her lawyers have spoken out since agreeing to the deal and neither have responded to DailyMail.com’s requests for comment.

The agreement, which is bound by confidentiality agreements from the parties, was finalized last Friday following two months of ‘lengthy mediation discussions,’ the estate’s administrator Russell L. Bauknight told the New York Times in a statement. 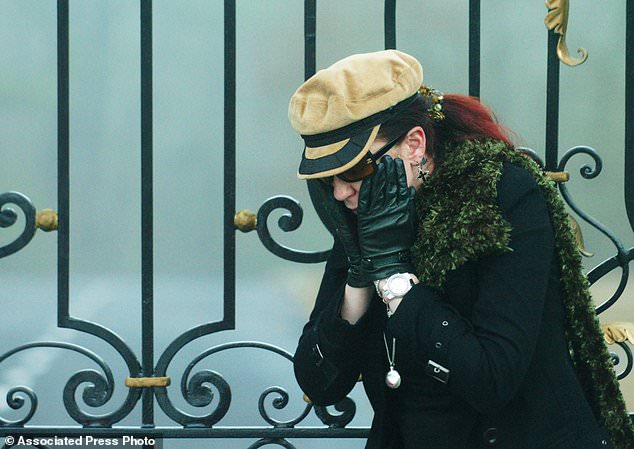 The saga erupted almost straight away after his death, with Hynie pictured being kicked out of his 60-acre estate and shaking its iron gates to be let in (above) 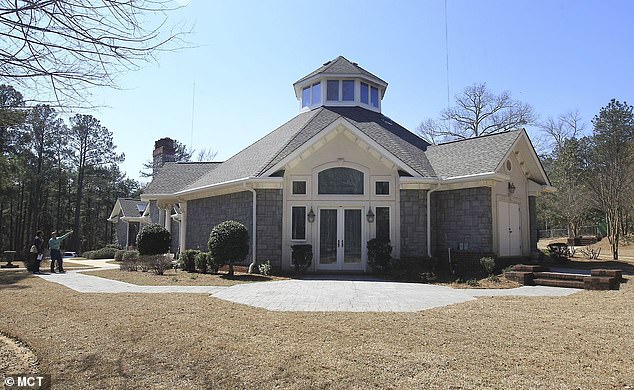 Brown’s mansion in Beech Island, South Carolina. While the terms of the deal and how the assets have been divided up remain under wraps, its conclusion paves the way for Brown’s dying wish to fund scholarships for disadvantaged children to finally be realized 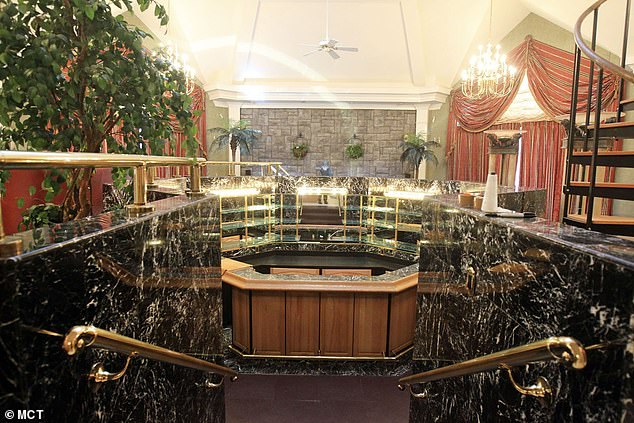 The atrium to his mansion. No details of the settlement have been provided and the value of Brown’s assets is also unclear

Brown’s longtime attorney Albert ‘Buddy’ Dallas told the paper: ‘If resolution has been reached, after 14 and a half years, I wonder if that’s some sort of record.’

Dallas was not involved in the settlement but has served as an executor of his estate.

Brown’s children filed a lawsuit against Dallas soon after their father’s death accusing him of mismanaging the estate.

More than a dozen lawsuits have been filed since Brown’s death from heart failure on Christmas Day 2006 as several people laid claim to his fortune.

The saga erupted almost straight away after his death, with Hynie pictured being kicked out of his 60-acre estate and shaking its iron gates to be let in.

In his will, Brown had left the vast majority of his fortune to the trust, his personal effects to some of his children, $2million for his grandchildren’s education and nothing to Hynie.

Hynie and Brown had a rocky relationship ever since they first met in the mid-1990s hen she worked as a Janis Joplin impersonator in Las Vegas. 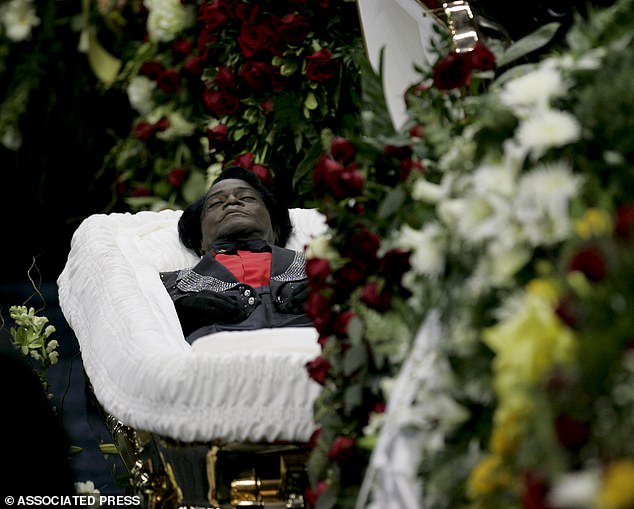 Brown lies in his casket ahead of his funeral. Brown died on Christmas Day 2006 aged 73 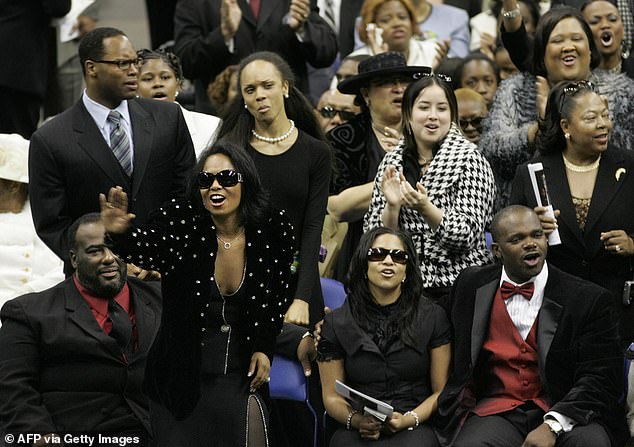 Four children of Brown at his funeral on 30 December 2006. Brown’s death has also long been a source of contention amid rumors that he was murdered

Hynie could still keep a connection to Brown’s estate through James Brown II.

Brown’s death has also long been a source of contention amid rumors that he was murdered.

The only person present when he died was his personal manager Charles Bobbit.

The star never had an autopsy after one of his children decided against it for ‘personal reasons’ and his remains were placed in a secret location.

Marvin Crawford, the doctor who signed his death certificate, has since come forward to say he does not believe the died of natural causes.

The star’s hairdresser Candice Hurst also wrote in a book that she believes there was foul play involved.