“I think it’s very important. It’s important for history,” said Spencer, who fought in France, Belgium, Holland and Germany as part of the 15th Canadian Field Regiment of the Royal Canadian Artillery.

In any normal year, he’d be standing with his surviving comrades at the National War Memorial today to watch dignitaries line up to pay their respects.

This isn’t a normal year, of course. For one thing, there’s a global pandemic putting the brakes on public gatherings. For another, Spencer just turned 100.

So instead of a formal ceremony, he’ll have to settle for a parade.

Spencer’s family, friends and comrades — including former chief of the defence staff Gen. Walter Natynczyk (retired) and members of his old regiment — took part in a (socially distanced) celebration outside his Ottawa home on Monday as a long line of vehicles snaked past, their drivers waving and shouting birthday wishes.

“It is a great celebration and everybody’s so nice,” Spencer said, beaming through his face mask.

Volunteers from across Canada stitched a quilt to mark the occasion. It was wrapped around Spencer by his daughter Katherine Spencer-Ross at the event.

Asked what it felt like to reach a century, Spencer said, “Grateful you made it — with a big belly laugh.”

He knows he’s one of the lucky ones. Spencer had many close calls during the war — times when he felt sure his number was up. He landed in Normandy when he was just 23 years old, only weeks after the D-Day landings. He’s still haunted by the memory of a tank driver killed in an instant by flying shrapnel.

“He was sitting right beside me,” he said. “That was a tough time. But you had a job to do and you did it.”

This year’s Remembrance Day will be difficult for Spencer. Thanks to COVID-19, he won’t be able to share the moment in person with other veterans.

“Terrible, very disappointing, not being able to do what you want to do, be close to people,” he said.

“I just feel lost. There is nothing you can do about it. But I will miss it.” 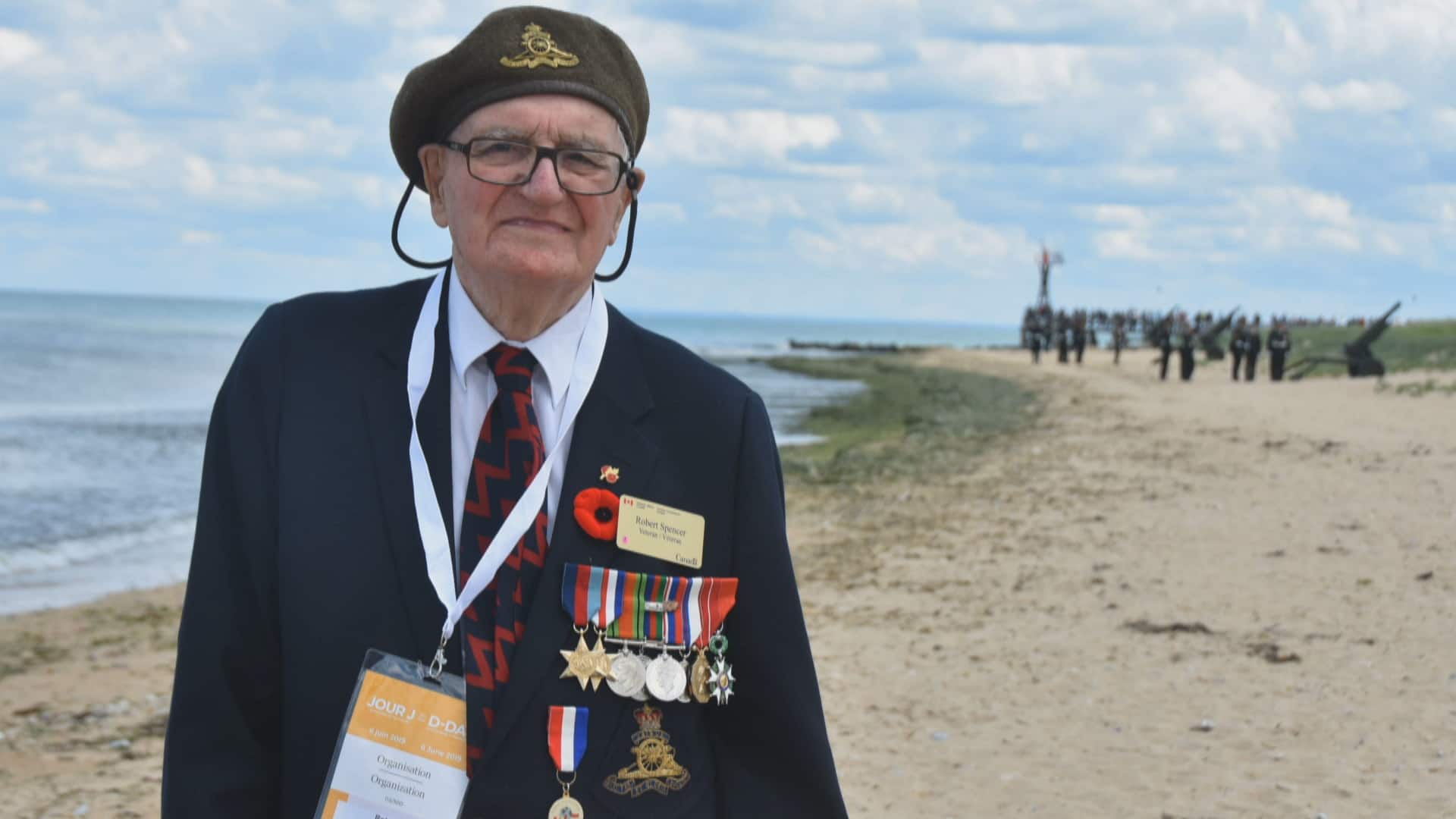 Second World War veteran Robert Spencer celebrates his 100th birthday a few days before the country marks Remembrance Day. It is the first time in several decades that Spencer will not be at the National War Memorial on November 11. 3:30

Veterans Affairs says that about 26,200 Second World War veterans were still alive in Canada as of March 2020. Their average age is 95.

Veterans Affairs Minister Lawrence MacAulay said pandemic restrictions on public gatherings mean the government must ask people to not attend any events in person. Ceremonies all across the country are being downsized.

“There will be a small ceremony put together by the [Royal Canadian Legion] that will pay full respect to the veterans,” MacAulay said. “But again, with the pandemic, we have to be very careful …”

So Spencer will be spending the day with his memories. “I’ll be thinking of times past. People we lost … the whole experience.”