Elon Musk’s purchase of the largest individually-held stake in Twitter is being investigated by U.S. regulators after he delayed reporting the buy – and thus failed to provide sufficient warning that a takeover bid was looming.

The investigation, currently in its early stages, could provoke a firestorm between the mercurial entrepreneur and the financial regulators, just as Musk is trying to wrap up his purchase of Twitter, approved on April 26.

It also comes amid frenzied speculation about what the world’s richest man will do to Twitter once he takes the reins.

On Tuesday, he said he would allow Donald Trump back on Twitter, in line with his previous declarations that he planned to err on the side of free speech rather than bans and censorship.

On Wednesday, Jack Dorsey, the co-founder and former CEO, also denied recent speculation that he had been brought back to head the Musk-owned company.

With the deal to take Twitter private expected to take two to three months to finalize, speculation is mounting as to what Musk will do.

The 50-year-old’s first move towards buying Twitter was his purchase of a 9.2 percent stake in the tech company in mid February.

Elon Musk is being investigated by the SEC, according to the Wall Street Journal, after he failed to disclose his purchase of Twitter shares as required by law within five days 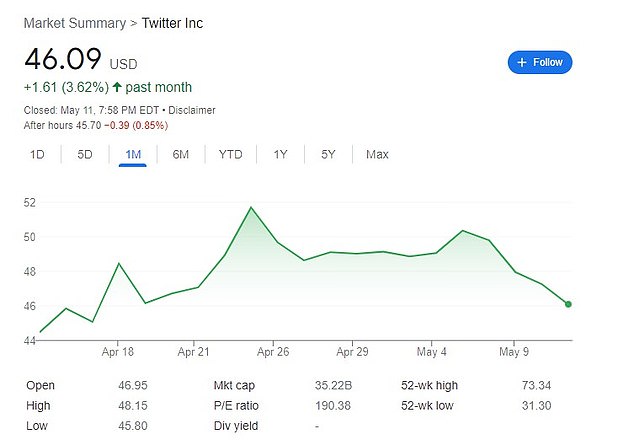 Musk bought his 9.2 percent stake in mid February, but did not disclose it until April 4. The value then rocketed, although it has been a rollercoaster ever since

But he did not disclose his purchase to the Securities and Exchange Commission (SEC) until at least 10 days later, on April 4.

Any investor who crosses a 5 percent stake must file a form with the SEC within 10 days. It serves as an early sign to stakeholders that a big investor could seek to control the company.

Musk’s April 4 filing also characterized his stake as passive, meaning he did not plan to take over Twitter or influence its management or business.

The next day, however, he was offered a position on Twitter’s board, and a couple of weeks later, the world’s richest man had clinched a $44 billion deal to buy the social media giant.

The SEC investigation was first reported on Wednesday by The Wall Street Journal.

Musk, known for his candid Twitter posts, has a long history of skirmishes with the SEC.

Most recently, a U.S. judge slammed him for trying to escape a settlement with the SEC requiring oversight of his Tesla tweets.

In April, the Information reported that the Federal Trade Commission is investigating whether Musk violated a law that requires companies and people to report certain large transactions to antitrust-enforcement agencies.

Dorsey, who stepped down as CEO in November, replaced by Parag Agrawal, has been broadly supportive of Musk’s moves and has been consulting with him over the direction of the company – most recently, confirming that he and Musk discussed reinstating Trump, and agreed it was the right thing to do. 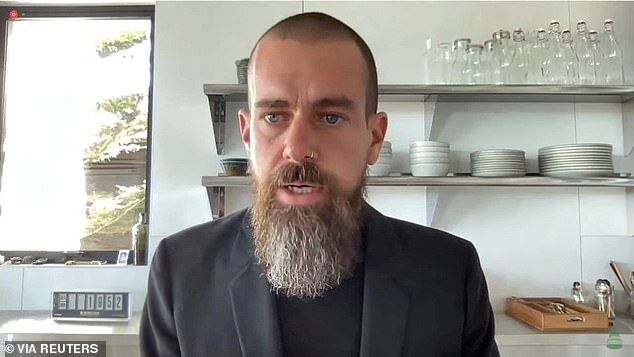 Jack Dorsey, pictured testifying before Congress in March 2021, has denied that he wants to take over as CEO of Twitter again

When musician and YouTuber Charles Wienand tweeted: I predict that @elonmusk will eventually just ask @Jack to be CEO of Twitter,’ Dorsey replied: ‘nah I’ll never be CEO again.’

Asked who should be CEO, Dorsey replied: ‘no one ultimately.’

Mark Milian, Bloomberg’s technology editor, joked: ‘What if the title is Big Bird?’

‘Tempting,’ replied Dorsey, and when someone suggested the job title Technoking, he replied: ‘Taken’.

Another asked, more seriously, whether Dorsey would like the job.

‘nah. it’s time to roll the dice again,’ he replied.