EXPRESS INFORMER > Sports > Sebastian Vettel on F1’s moral compass, being a climate change hypocrite and his future in racing

Sebastian Vettel politely interjects when the topic of climate change comes up during our conversation at Silverstone.

‘I don’t want to sound like I am teaching here,’ the German says, ‘but I don’t like the phrase “climate change”.

‘It suggests that something is just changing and is going to be fine. I think it is more a crisis or a breakdown in terms of the actual consequences.’

Vettel has been there and done it in F1. He is a four-time world champion and, when he does eventually decide to call time on his career – more on that later – he will retire as one of its greats.

In recent months, the 34-year-old has been driving a different kind of vehicle – one of vociferously campaigning on a number of topics, including human rights and, in his words, the climate crisis. 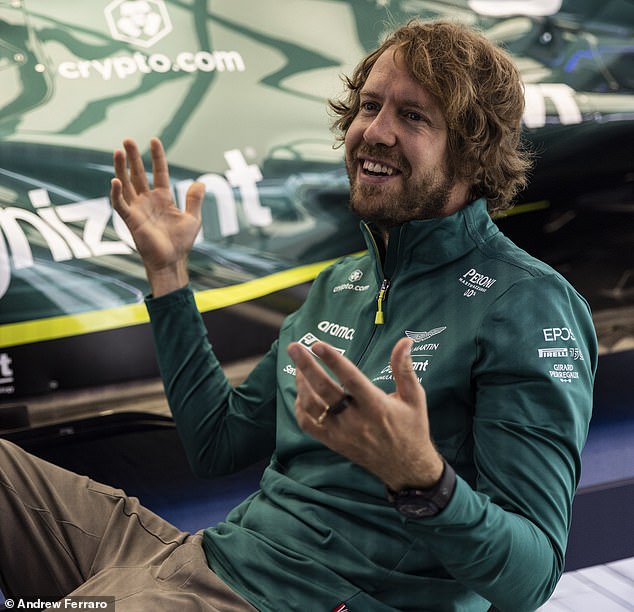 Vettel, 34, has become a campaigner for human rights and climate change in recent months

In May, he became the first active F1 driver to appear on the BBC1 politics show Question Time, where one audience member put it to him that he was a ‘hypocrite’ for being so outspoken about climate change while competing in gas-guzzling cars and regularly flying all over the world to drive them.

Those claims – which Vettel largely accepts – reared their head again at the Canadian Grand Prix in Montreal. Before the race, Vettel wore a helmet denouncing oil sands mining in the country, but faced criticism for having an having an oil company, Aramco, sponsorship above the message.

‘I have seen a lot of hypocrisy, but this takes the cake,’ Alberta’s energy minister Sonya Savage said.

‘A race car driver for Aston Martin, with financing from Saudi Aramco, complaining about the oilsands? Perhaps a pedal car for Formula One?’ 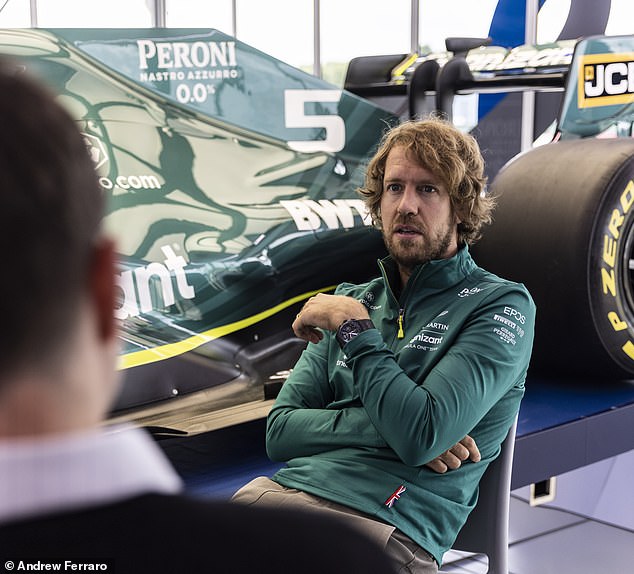 Vettel is all too aware that he is putting himself in that position by being so vocal but insists he is unperturbed by the hypocrite label. ‘In the end, we are all hypocrites,’ he tells Sportsmail.

‘I am probably more of a hypocrite than you with the life that I lead in terms of travelling the world, racing fast cars for joy, but I think every single one of us has a responsibility. We only have one shot at this.

‘We have a certain degree of control, where we can impact today and make a difference, and on other stuff we depend on other people ultimately making the right decisions for us.

‘In the bigger picture, countries, Governments, politicians… we need them to really be aware of what is going on and to tell the truth. Telling the truth doesn’t always get you votes but I think now is the time where we have to be honest and say what’s going on.

‘We have big events and there are a lot of people travelling round the world and a lot of resources are required to put on our show. We entertain people, so there is an element of that, but it is not just F1 – there are other sports and business and events that have that responsibility.

‘But as F1 we are at the forefront because we are burning fuel to race our cars.’ 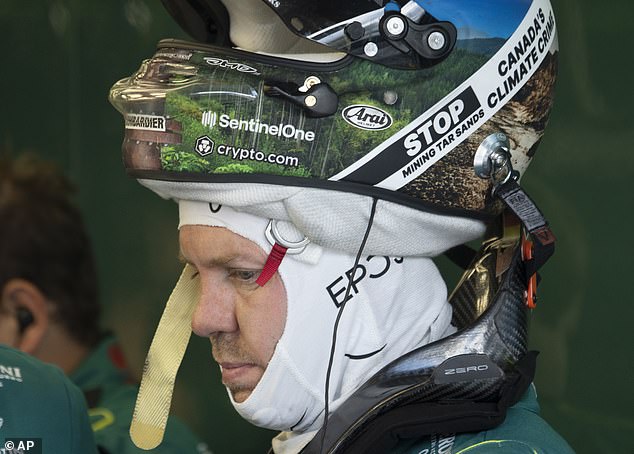 In Montreal, Vettel wore a helmet denouncing oil sands mining in the country, but faced criticism for having an having an oil company, Aramco, sponsorship above the message

It is not just the cars themselves that attract the ire of climate change campaigners. On this year’s circuit, there are 22 races in 21 countries, and transporting hundreds of people all around the world to facilitate the F1’s travelling circus has a significant impact on the environment.

That is largely the nature of the beast but F1 and organisers do not help themselves. They could undoubtedly do more.

For example, the circuit had already been in Miami in May, but a month later the drivers were back in North America for the Canadian Grand Prix. They had been to Spain, then to Azerbaijan – a country that is only a stone’s throw from Asia – before heading to Monaco in between those two races.

Vettel questions why F1 could not have staged Grands Prix in the US and Canada back-to-back to minimalise the travelling, and in the process reduce the series’ carbon footprint.

‘F1 is a global platform and a global sport, we travel around the world and we need to make sure we do that responsibly and not keep going back and forth,’ he said. 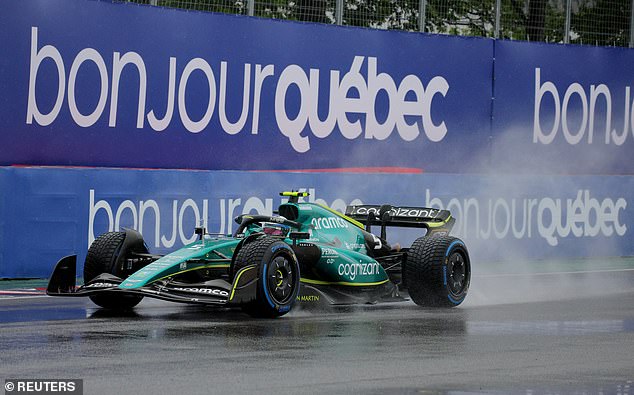 ‘We go to Baku and then to Canada, before coming back here [Silverstone], which does not make a great deal of sense when you have had a race in Miami already.

‘We just need a bit more structure. We have to string together the calendar in a way that makes sense. That is an easy win and quite a big win.’

Such issues may not be Vettel’s problem for much longer. The German star, who won four consecutive world titles between 2010 and 2013, is out of contract with Aston Martin at the end of the season.

It is entirely feasible that the current campaign, where Vettel sits 14th heading into the British Grand Prix – a race the German has won twice – will be his last.

Vettel admits his growing fears over the state of the planet may play a part in his decision whether to walk away or to carry on doing what he loves most.

‘I don’t think it is black and white,’ he says. ‘I have had so many races and so much fun, so it is a bigger decision, but certainly it does play a role.

‘Looking where the future is going, the truth is I am worried – I am worried for my children [Emilie and Matilda] first of all, for their future, but also for myself. Whatever the decision will be, it is not done yet and we will take all of these things into account. 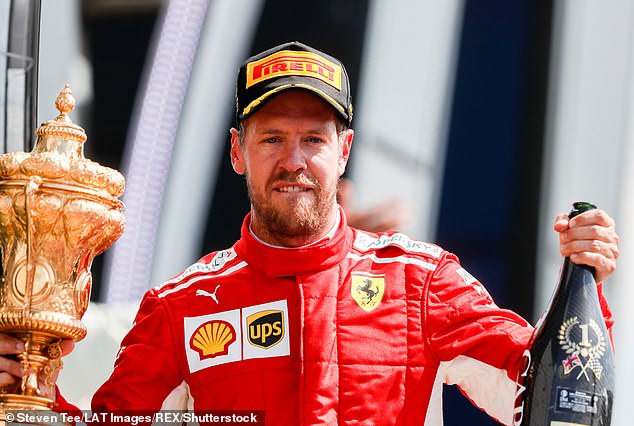 ‘I have thought about it for several years. After the contract ended with Ferrari there was a question of do I continue or not, so now I am in a sort of similar position. It is not the first time I have been thinking about what I could do after F1 and the other things I would like to explore.’

Perhaps the affable German, who is engaging and relaxed throughout our chat at a promotional event for the Peroni’s new 0.0 per cent beer, has already given an indication of where his next role may lie with his outspoken nature.

While our interview has been arranged through a PR, that does not stop Vettel being refreshingly honest – a trait rarely found in sportspeople in an era where they often trot out the same cliched lines for fear of causing offence or even the slightest drip of controversy. 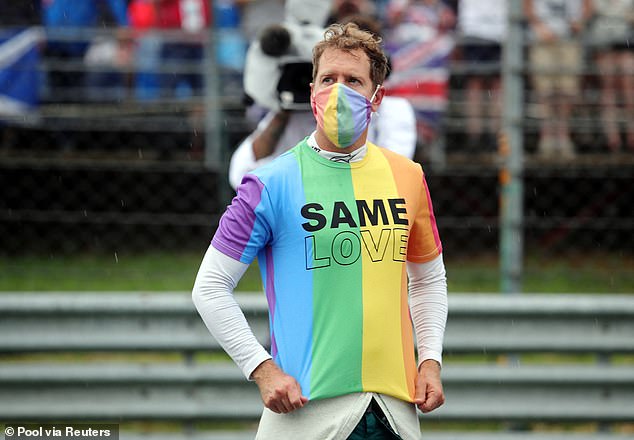 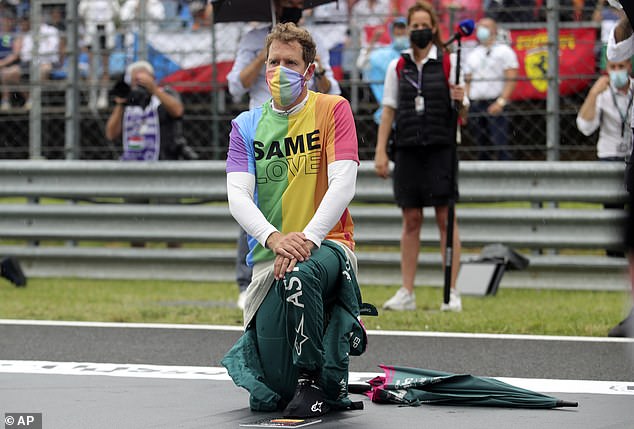 ‘There are some topics that you just cannot hide from,’ Vettel says. ‘I know that sports, maybe in the 90s, developed a habit of politics and some subjects were not spoken about but we are past that stage and have evolved.

‘Some you cannot afford not to talk about – they impact you and they impact on so many people around the world. You have to take a stand, in my opinion.’

One such subject is human rights, another that Vettel has not been afraid to discuss publicly.

Vettel – who has often kneeled before races and was reprimanded for not removing a t-shirt promoting LGBTQ+ rights ahead of the national anthem at the Hungarian Grand Prix in August – is conscious of the dichotomy between wanting to grow F1 and taking it to places with poor human rights records.

On the F1 circuit, there are races in Azerbaijan, Bahrain, Qatar and Saudi Arabia. There has also been a Russian Grand Prix since 2014 but the race was cancelled this year because of the Vladimir Putin-led invasion of Ukraine. 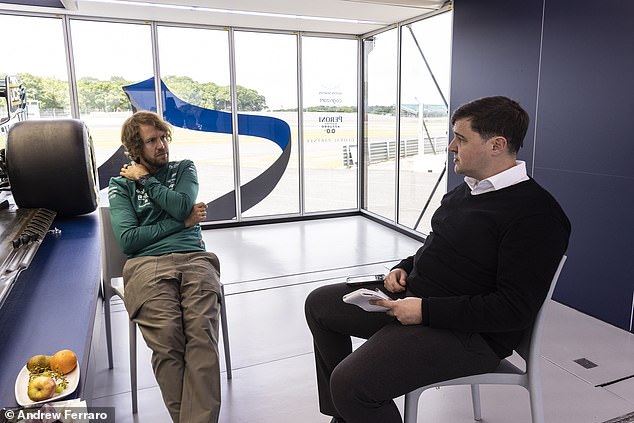 ‘It is very difficult because we are not making the calendar,’ Vettel begins. ‘It might look a bit different if we did. The key is, if we go to these places, which I think is fair enough, we have to take on the responsibility and try and leave a positive impact behind.

‘To do that normally you need money and we are usually going to these places because they are offering a lot of money. We should use some of that money to have that impact.

‘You can avoid going there, but at the same time there are great people there. There are people there that are making horrible decisions and living in a very different and impacting in a negative way, but on the other hand you have so many young people, so many great stories to tell and talk about their lives.

‘If we then decide to go, it needs to be very clear what the risks associated to it are up front and there needs to be a point where certain things are a red flag and a stop sign, which means we don’t [go].

‘We would have to say “maybe we are going in the future, but not under these circumstances”. We need to develop a moral compass in the future for what is the threshold for going and not going, and if we go, take some of the cash to have an impact.’

Peroni Nastro Azzurro 0.0%, partners of the Aston Martin Aramco Cognizant Formula One Team, are bringing F1 fans the passion from inside the garage via a new multi-sensory experience ‘IL PITSTOP’ which is travelling around Europe this summer. ‘IL PITSTOP’ will immerse fans in the sights, sounds and smells of an F1 garage, whilst providing an opportunity to trial the crisp and refreshing taste of Peroni Nastro Azzurro 0.0%.