EXPRESS INFORMER > News & Politics > SEBASTIAN SHAKESPEARE: ‘I WILL get my voice back after Covid-19 battle,’ vows Marianne Faithfull

The singer, 73, has revealed she’s fighting to perform again after winning a serious battle with coronavirus earlier this year.

‘I think I’ll get my voice back,’ she declares. ‘I just have to practise.’

Marianne Faithfull, 73, has revealed she’s fighting to perform again after her battle with coronavirus earlier this year

‘I really hurt my lungs,’ she explains. ‘This, after smoking most of my life and having emphysema. And my short-term memory is affected.

‘But I’m told that when you have coronavirus as badly as I did, that happens. But your memory comes back, and mine is coming back. And my lungs are coming back, too.’

She’s even managed to record an album of poems set to music, She Walks In Beauty, due to be released early next year.

It was inspired by her school days at St Joseph’s Convent School in Reading.

‘I had a wonderful, inspirational English teacher called Mrs Simpson,’ she says. ‘Not a nun, obviously.

‘She introduced me to the English Romantics. I had to leave it all behind in order to be a pop singer, but I never forgot them.’ 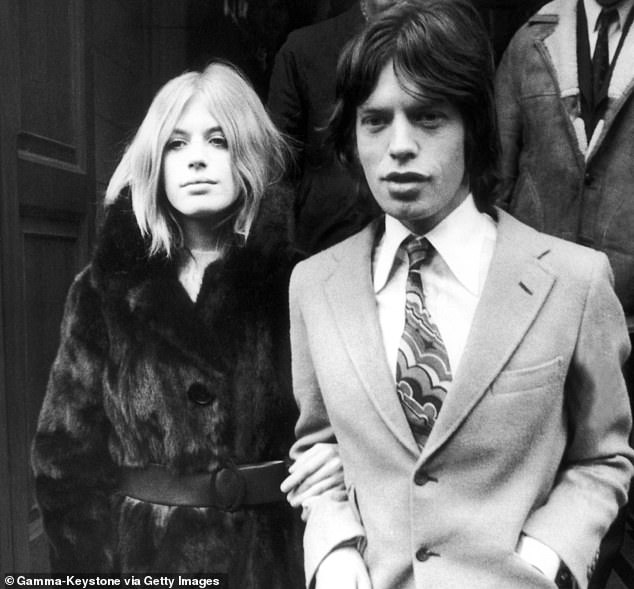 Army officer’s daughter Faithfull was the long-term girlfriend of Jagger when she was seduced by Richards in 1969.

Richards later admitted he had bedded Marianne to get revenge on Jagger, who had enjoyed a fling with Anita Pallenberg, Richards’s girlfriend at the time.

It was ‘not the first time that we’d been in competition for a bird’, Richards wrote in his 2010 autobiography Life, adding: ‘It was like two alphas fighting. Still is.’

His revenge in bedding Marianne — which he says happened only once — was interrupted when Jagger returned home early.

Their ‘hot and sweaty’ episode was cut short as Richards ‘did one out the window’, clutching his clothes, although he left his socks behind.

Olivier Award-winner Sir Derek Jacobi, who has starred in Hollywood films such as Cinderella and Tomb Raider, confesses his big-screen roles come at a cost. ‘You’re not in charge when you do film.

Somebody else is making all those artistic and creative choices for you,’ he says. ‘It’s frustrating, but they pay you more. It’s compensation.

The only rich actors I know are film actors. I don’t know any really wealthy actors whose lives, like mine, have been mostly on stage. We make a good living, but the megabucks are the film boys. The frustration is assuaged by the pay cheque.’

Who says Hollywood and royalty don’t mix? Princess Marie-Chantal of Greece, whose 20-year-old son, Prince Achileas-Andreas, is embarking on an acting career, says she supports his choice — as she does with her other four children.

‘I want them to go out there and choose their paths and careers. I don’t want them to go into the family business or tell Tino [her eldest son, second in line to the throne] one day he might be King.

Achi, as he is known to his family — including his grandfather Constantine II, the last king of Greece — grew up in London and attended Wellington College in Berkshire.

He now lives in New York and has made his acting debut on the U.S. series, The Bold And The Beautiful. 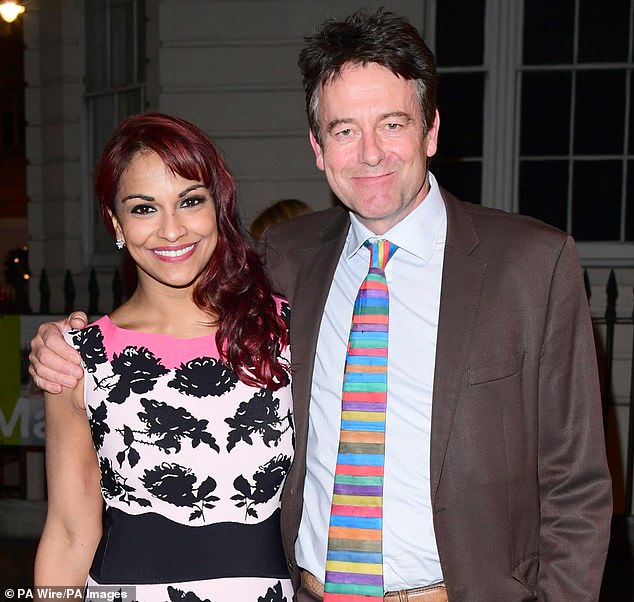 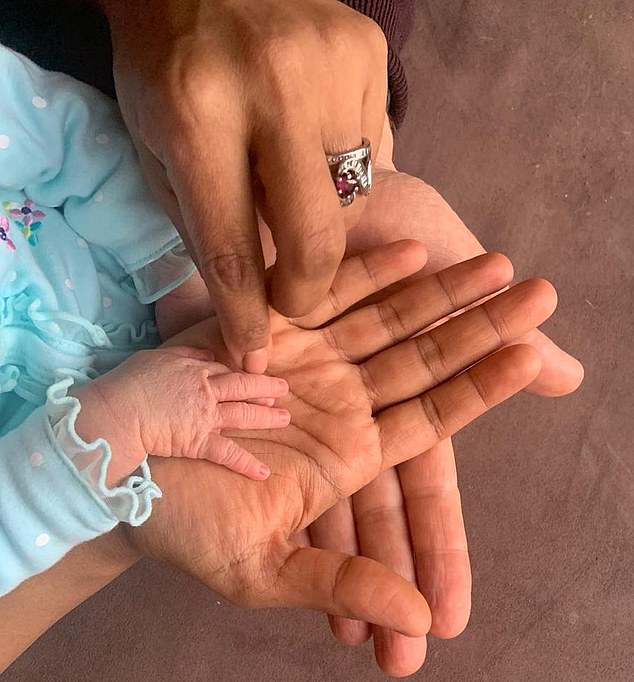 Theatres might be closed, but soprano star Danielle de Niese is not lacking excitement in her life.

The 41-year-old, who is married to Glyndebourne Opera House chairman, Gus Christie, has given birth to a 7lb 13oz girl named Sheherazade.

‘Gus and I are absolutely delighted. She is the first baby girl at Glyndebourne in 54 years,’ says Danielle.

‘My labour was very fast — just under four hours. We are all doing well and our son, Bacchus, is beyond thrilled to have a little sister to cuddle and look out for!’

Gus, whose grandfather, John, founded Glyndebourne in 1934, also has four sons from his previous marriage to writer Imogen Lycett Green.

Turning 39 really is a bed of roses for Kelly… 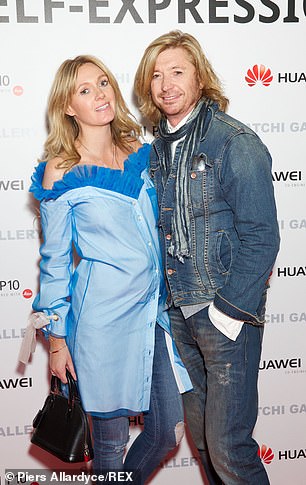 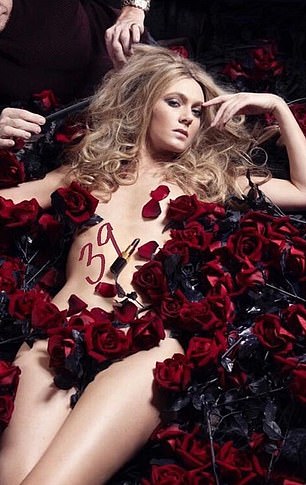 The fashion designer, who is the mother of two of Nicky’s children, gave a conspicuous nod to the film’s famous scene in which its lead actress, Mena Suvari, lies in a bathtub full of red rose petals.

Nicky, 61, whose clients have included Princess Diana and activist Bianca Jagger, shared a picture of it online.

Wearing nothing but her age written on her torso in dark red lipstick, Kelly says: ‘He’s spoilt me rotten as usual.

Labour’s former deputy leader Tom Watson has revealed the inspiration behind his dramatic weight loss is actually none other than marathon-running comedian Eddie Izzard.

‘When I was just elected deputy leader of the Labour Party, he told me about the sugar-free lifestyle that he was leading that was great for his health, which started me on a learning journey, which meant that I gave up sugar and I lost eight stone.’ 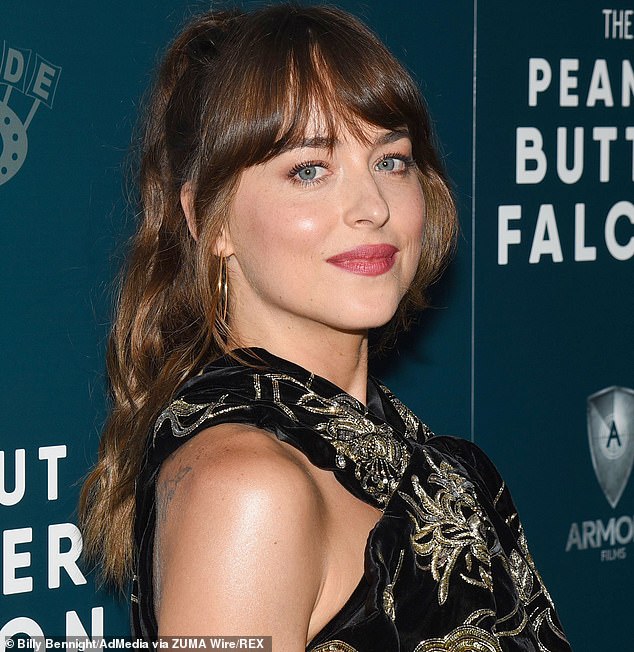 Fifty Shades Of Grey star Dakota Johnson reveals she’s been hired as a director of the sexual wellness brand, Maude

Move over, Gwyneth Paltrow! Fifty Shades Of Grey star Dakota Johnson is not only dating Gwynnie’s ex-husband, Coldplay frontman Chris Martin, but she’s now encroaching on her territory as a lifestyle guru.

While Gwyneth founded Goop in 2008, Dakota reveals she’s been hired as a director of the sexual wellness brand, Maude.

‘Sex is important and special, and should be treated as such. I would love to see a world where we learn to give ourselves and our partners proper care and attention.’

MasterChef host John Torode is being taught to revise the family menu by his wife, Lisa Faulkner.

‘We have a thing about jacket potatoes because I think they’re a dinner — as everyone does because they are — but he thinks they’re a side, like to have with something,’ says the actress. ‘So I’m teaching him the art of a jacket potato.’

If they have a row, will John cook to make up for it? ‘He cooks for everything. In fact, my daughter Billie was saying the other day: ‘You both really show your love through food, don’t you?’ We cook all the time to show our love or say sorry or whatever.’