EXPRESS INFORMER > Science & Technology > Seals rely on their highly-developed WHISKERS to locate prey when hunting in the dark, study claims

Seals rely on their highly-developed WHISKERS to locate prey when hunting in the dark, study claims

What if we could use our facial hair to direct us to the kitchen whenever we wanted a secret midnight snack?

It turns out that seals have this ability, as they are able to use their highly-sensitive whiskers to hunt for prey in complete darkness.

Scientists from the National Institute of Polar Research (NIPR) in Tachikawa, Japan attached tiny cameras to the cheeks of elephant seals to record their whiskers’ movement.

They discovered that the seals used their whiskers to detect water movement caused by fish when in reduced lighting.

They hope the findings will help better understand how whisker-sensing influences the foraging behaviour of different mammals.

Northern elephant seals have highly developed whiskers. They use them to sense movements in the water caused by their prey in order to hunt in the darkness of the deep sea 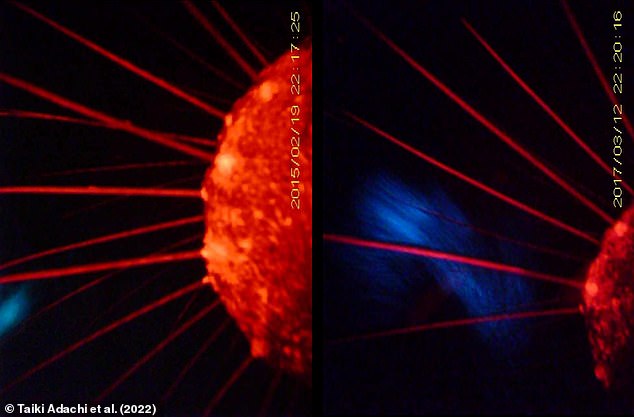 A screenshot of a video taken by a video logger attached to a seal’s cheeks, lighting up their whiskers with infrared light that is invisible to seals. The video loggers tracked the depth of the seal and whether the whiskers were protracted or retracted 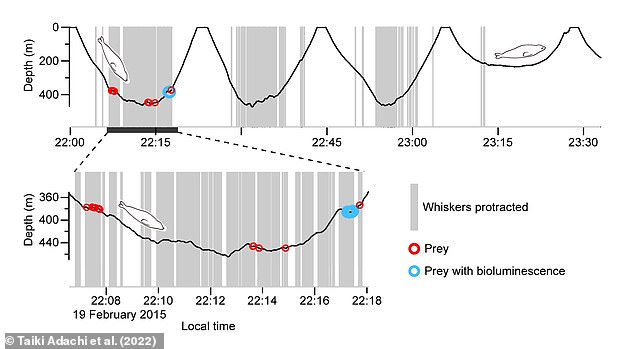 Graphs showing the depth of a seal measured over time. The grey areas indicate that the seal’s whiskers were extended, and the coloured circles show when it came into contact with prey

HOW THE STUDY WAS CONDUCTED

They also tracked the depth the seal was swimming at

The seals also utilised their whiskers to hunt prey with and without bioluminescence, suggesting they are their primary hunting tools

Seals have long been known to easily locate their prey in the deep ocean where sunlight cannot reach, but how they do this has remained somewhat of a mystery.

This is where they emit a sound that reflects off nearby objects, enabling them to create an image of their surroundings and find food.

Other mammals utilise bioluminescence – light created inside an organism through a chemical reaction – of their prey.

Seals do not have the active sonar to allow them to hunt with echolocation, and have also shown ability to hunt in areas that are not lit up with bioluminscence.

The research team at NIPR hypothesised that the seals rely on their highly-developed whiskers to locate prey.

Many mammals have vibrissae; mobile facial whiskers that process vibrational information from their surroundings.

Scientists have so far found it difficult to study them in a mammal’s natural environment rather than by using a captive animal or isolating the whiskers.

However, in this study the researchers placed tiny video loggers on the cheeks of free-ranging female northern elephant seals.

These seals have the highest number of nerve fibres per whisker of any mammal.

The video loggers tracked the movement of the whiskers using an infrared light, invisible to the seals, and their depth as they approached prey.

The researchers found that the seals captured moving prey by extending their whiskers in front of their mouths to sense water movement.

They protracted and retracted their whiskers rhythmically to search for hydrodynamic cues that signal the presence of a live snack.

They would protract their whiskers when swimming deeper than 656 feet (200 m) underwater – depths where small fish are abundant and they tend to forage.

While the seals may also be on the look out for bioluminescence from fish, a 2020 paper suggests the flash may even dazzle them and put them off.

The researchers concluded that their sensitive whiskers are the primary tool they use to find prey, as they still utilised them with bioluminscent prey.

Taiki Adachi, a project researcher at NIPR, said: ‘Our findings solve a decades-long mystery about how deep-diving seals locate their prey without the biosonar used by whales, revealing another mammalian adaptation to complete darkness.

‘The next step is conducting comparative field studies on other mammals to better understand how whisker-sensing shapes natural behaviour in each mammalian species under different environments.’

The research was published today in the Proceedings of the National Academy of Science.

Pregnant elephant seals have a ‘built-in GPS’ that tells them when to make the 6,200-mile-journey home from foraging sites in time to give birth, study reveals

Every year, pregnant female elephant seals carry out an ambitious 6,200-mile (10,000km), 240-day journey across the Northeast Pacific Ocean in search of food

Despite this, the females always seem to make it back home just in time to give birth – and until now, it’s remained unclear how they nail this timing

The pregnant females appeared to have an internal map sense, which functions like a built-in GPS and helps ensure they get home within five days of their pup’s arrival 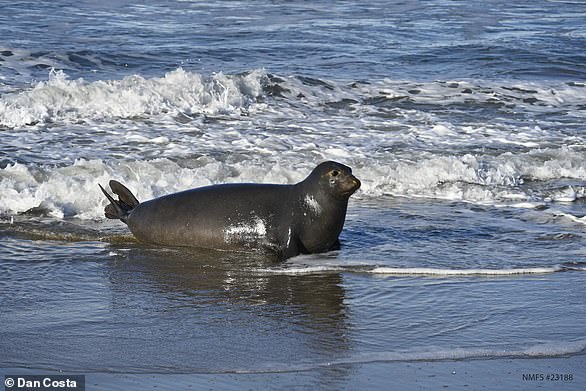 New research has revealed that pregnant females appear to have an internal map sense, which functions like a built-in GPS and helps ensure they get home within five days of their pup’s arrival