Chef Jean-Philippe Bourassa-Caron prepares poached eggs and a bordelaise sauce for a new feature at his Chez Boulay restaurant in Quebec City.

The sauce and eggs complement an unexpected part of this brunch dish, a meat terrine made with seal.

“I really like to work with seal because it’s a nice taste,” said Bourassa-Caron. 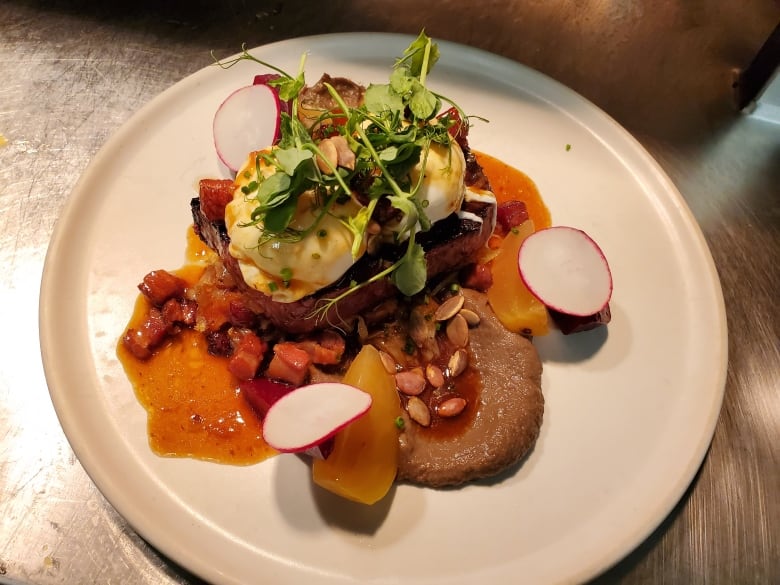 Bourassa-Caron says he knows some customers might have negative attitudes about the Canadian seal hunt, but he says those attitudes might need to be updated.

Seal Fest is a promotion by a Quebec company, SeaDNA, which sells seal meat and seal oil capsules, and by the Seals and Sealing Network, a national non-profit organization that promotes sustainable use of seals. 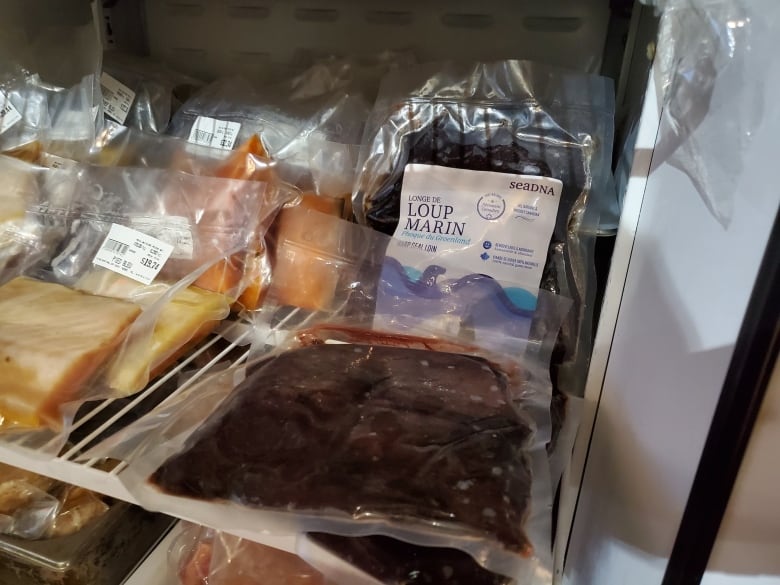 Frozen harp seal meat is harvested in Newfoundland and Labrador. Seal in French is ‘loup marine’ or ‘phoque.’ (Jane Adey/CBC)

Andy Guffroy, head chef at L’Intimiste restaurant in Lévis, has prepared seal charcuterie for customers to try served with cheese, mussels and figs. He’s keen to expose foodies to seal meat and help educate diners about the hunt.

“I think we are a little bit hypocritical about meat. We go to the grocery stores and we buy the final product. We don’t see where it’s comes from. We don’t have any idea,” he said.

“So when we did research about the seal (hunt) we discovered that it’s very responsible in the way it’s done. It’s the way that needs to be done and there’s nothing horrible about it.” 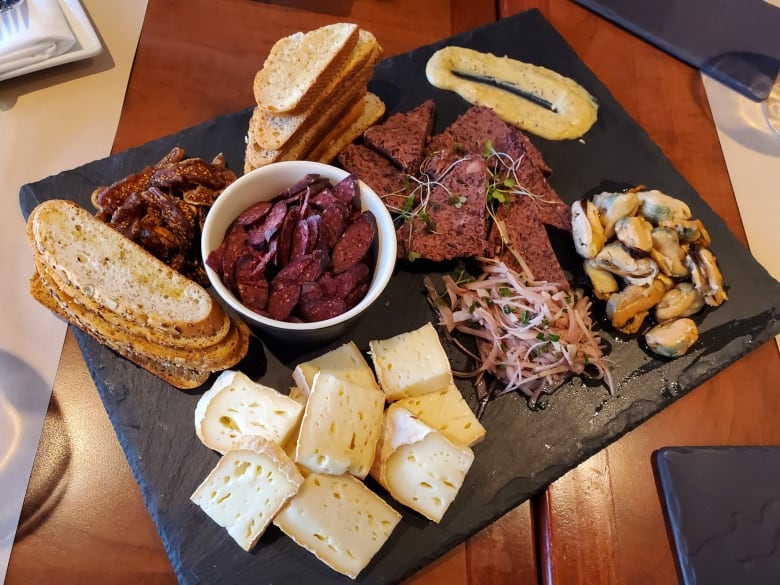 Harp seal is harvested near the Magdalen Islands but most of the meat used during the festival is harvested in Newfoundland and Labrador. The Department of Fisheries and Oceans estimates the current harp seal population to be 7.4 million animals, almost six times what it was in the 1970s.

“There is some evidence to suggest that the Northwest Atlantic harp seal population may be reaching levels close to its natural carrying capacity, which is the maximum number of individuals of a particular species that can be sustained by that species’ ecosystem,” reads DFO’s website. 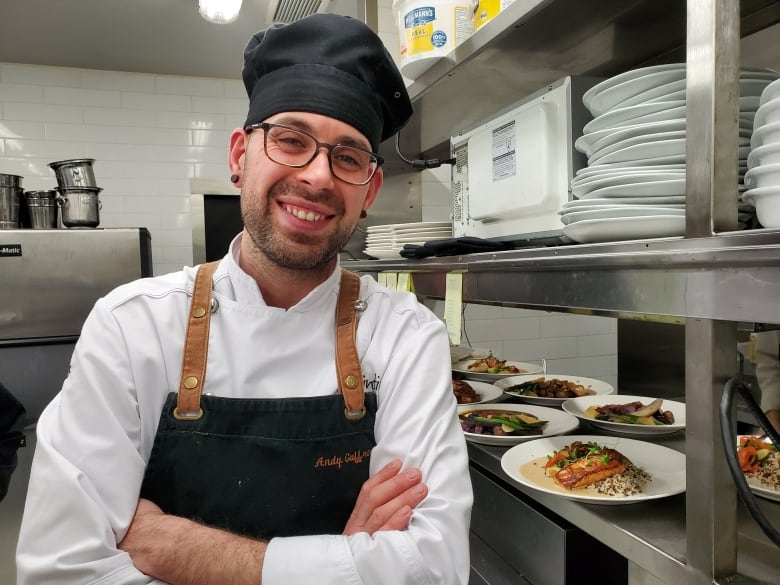 Seal tataki is on the menu at Le Renard et La Chouette. Chef Sarah Arab serves pieces of seal loin, lightly seared and rolled in Nordic shrimp powder she made from shrimp shells and herbs. She says she’s enjoyed learning more about the seal population and how they’re harvested.

“It was pretty eye-opening for me. I was more curious about it, naturally,” said Arab.

Her customers are curious too. Monica Oliver of Toronto sampled the seal tataki at Le Renard et La Chouette. 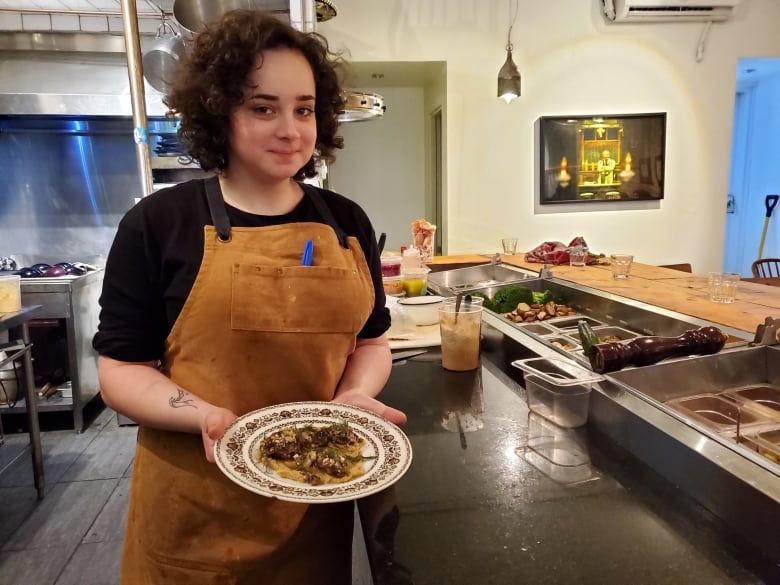 “I got to say, it is an amazing dish,” she said, admitting to feeling some trepidation when she saw it on the menu.

“Growing up, it was definitely [the feeling that] seal hunting was very bad. I think Canadians definitely do need to hear both sides of the story and then make their decision.”

Felix Bajeau of Quebec City ordered up a seal meal during the festival too. He said he particularly enjoys eating wild meat.

“My brother is a hunter, so he hunt deers. If you eat meat it’s probably the same as eating beef or pork when you eat seal and maybe it’s even better because the animal lived a happy life in the wild before being eaten,” said Bajeau. 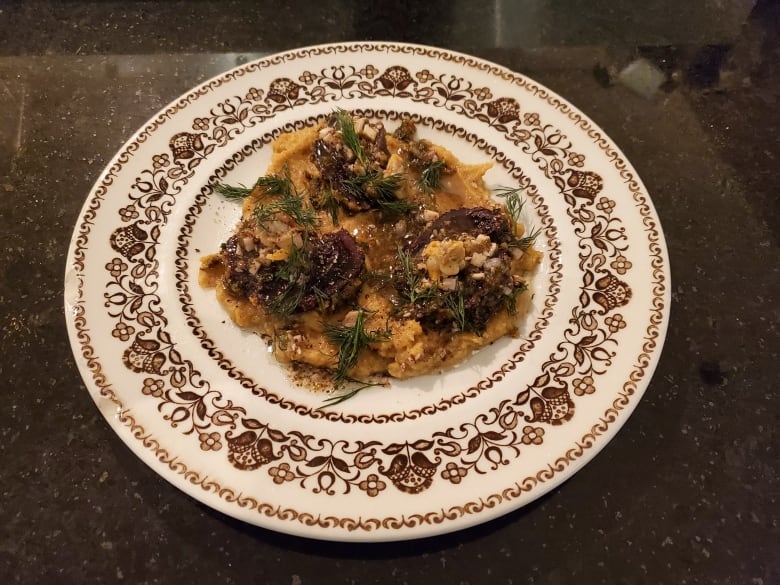 At Le Pied Bleu restaurant on Rue Saint Vallier in Quebec City, chef Fabrice Quenehen cooks up typical French cuisine inspired by his home in Lyon, France. For Seal Fest, Quenehen made a seal saucisson — or sausage — and served it in a lentil stew with a mushroom and red wine sauce.

“I really enjoyed to cook with this meat,” said Quenehen.

He encourages more chefs to experiment with seal and especially chefs in Newfoundland and Labrador. He says he’d like to see a seal cookbook that helps Canadians understand how to use this particular protein. 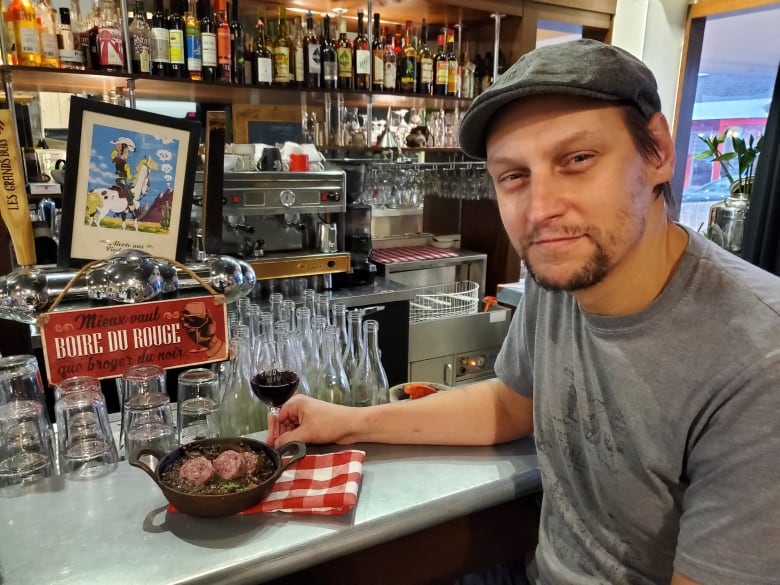 Fabrice Quenehen, originally from Lyon, France, is head chef at Le Pied Bleu in Quebec City and known for his cuisine using things like heart, liver, kidneys and glands. During Seal Fest 2019, he prepared seal saucisson for customers. (Jane Adey/CBC)

“We can eat this meat because the population is healthy enough to sustain it,” said Quenehen.