Parts of Sea World have been cordoned off after two helicopters collided outside the theme park leaving four people dead, three fighting for their life and others injured.

Sea World on the Gold Coast took the step to stop park visitors from looking at the crash scene, as traumatised witnesses speak out about what happened.

Witness Emma Burch told Daily Mail Australia how the accident unfolded at about at around 2pm on Monday.

‘From what we saw one was taking off, the other landing. They clipped each other,’ she said.

‘Massive bang heard right through the Broadwater tourist park then the swooshing as the one that lost control hit the water and broke apart.

‘It’s just awful. Everyone is in shock.’

Sea World Helicopters expressed its sympathy for those involved in the crash and said it is cooperating with the authorities to find out what happened.

It is estimated hundreds of witnesses saw the shock mid-air collision unfold.

‘I heard a bang and saw smoke billowing from one of the choppers. It was smoking and wobbling to the ground,’ one said.

‘One person was asking whether it was part of the Sea World show.’

Local man Tor Kumpel and his wife were swimming at the nearby Broadwater estuary when he saw the helicopters crash into each other.

‘It was only one helicopter that crashed. The one that was coming up. It was horrific to see,’ he added.

‘The (pilot) who was in the other one landed that.’ 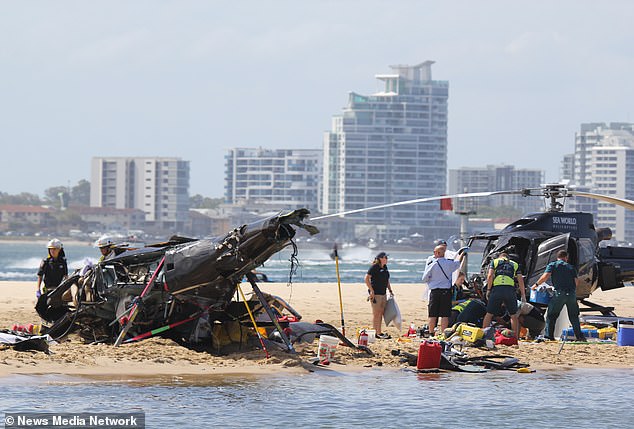 A man called John who was on holiday with his wife and toddler son on the Gold Coast phoned Melbourne’s 3AW radio about the tragic scene.

‘I’m at Sea World at the moment and it looks like there has been a massive crash with two helicopters,’ he said.

‘Basically it’s all happening here at the moment, ambulances, fire trucks. I was just walking with my son and some Sea World staff were running outside.

‘I didn’t really know what had happened, but there was a massive bang,’ he said. 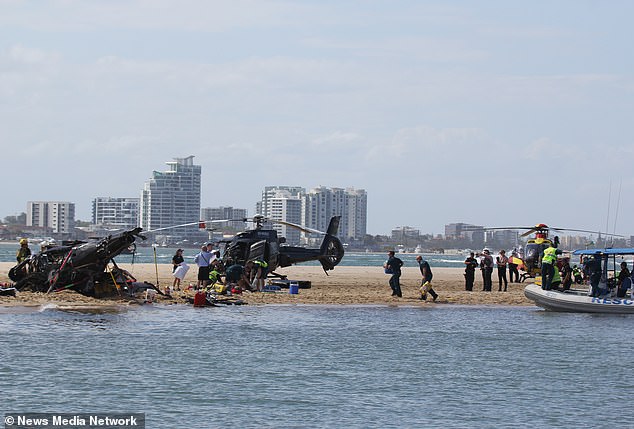 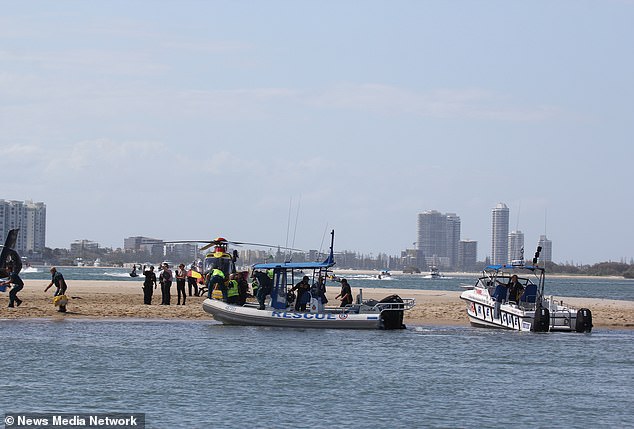 The two-helicopter crash left four people dead, three fighting for their life and others injured

John said Sea World had ‘closed that side of the park now so people can’t look out the side into the water there. It’s pretty scary stuff, actually.’

‘It happened just outside the theme park, apparently one was taking off and the other was flying over or something like that…

‘It is literally just outside the theme park, we could hear it on that side.’

John described what he heard as ‘a massive, massive bang. It was just huge. I’m not sure if it was the propellers or whatever hitting against each other.’ 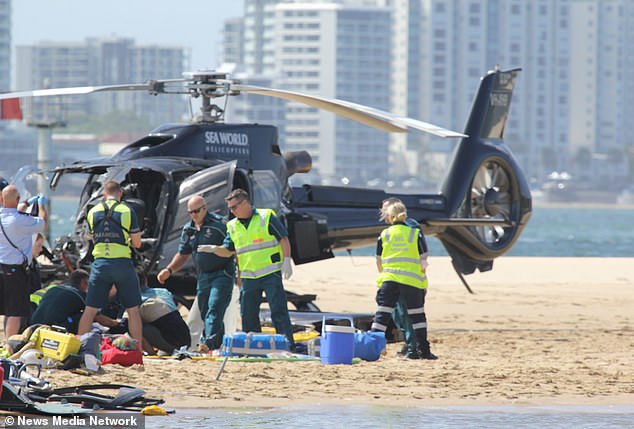 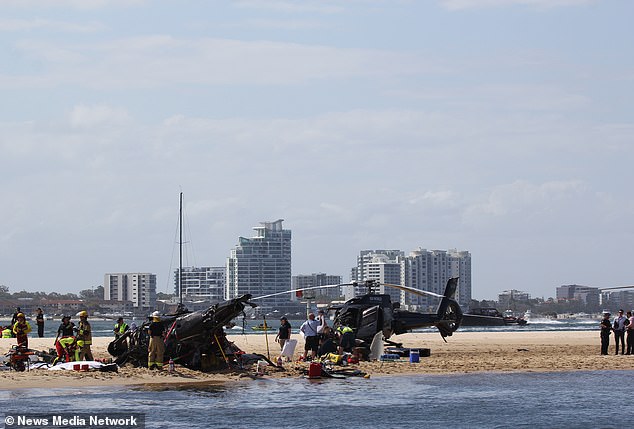 He saw a woman ‘and her son at the helipad there in tears’ and speculated that she may have had family members on one of the helicopters.

‘There was no announcement over the park’s speaker system about what had happened,’ he said.

‘The theme park is basically running as normal. They’ve only really blocked that side so no one is looking out over the water, for obvious reasons.

‘They’re just trying to keep the thing running as normal, I guess.’

One NSW woman saw the crash unfold as she queued for the Vortex ride at Sea World.

‘My son said there were two helicopters coming at the same time and I’d never seen that but then one turned and hit the other with its tail,’ Amii McDermott from the Blue Mountains west of Sydney told the Gold Coast Bulletin. 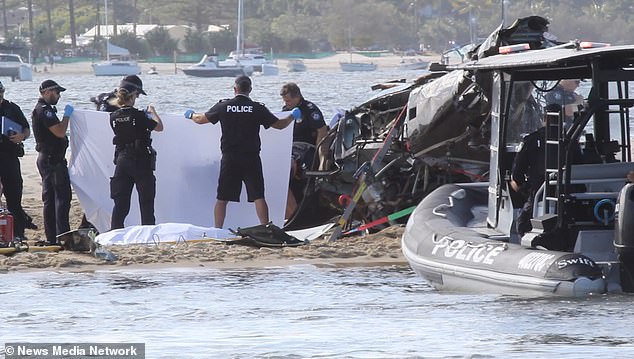 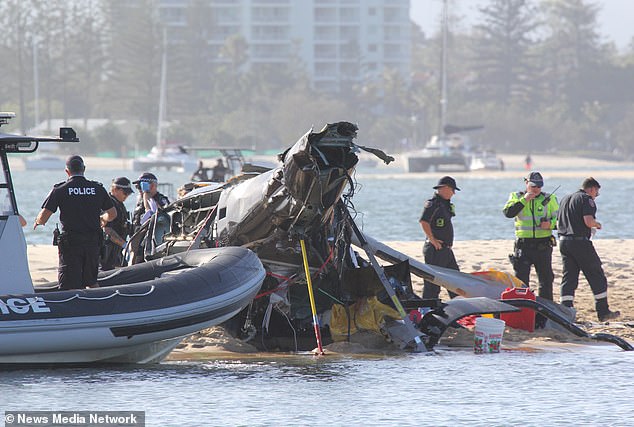 Ms McDermott said she had never seen anything like that before and that she and her family were shocked and horrified.

The 42-year-old emergency dispatcher said there was ‘debris everywhere, the tail fell off one of them and the helicopter nosedived into the ground at full-speed’.

She said although her toddlers don’t know what they have seen, her older children do.

Sea World Helicopters expressed its shock and sympathy for those involved in the crash. 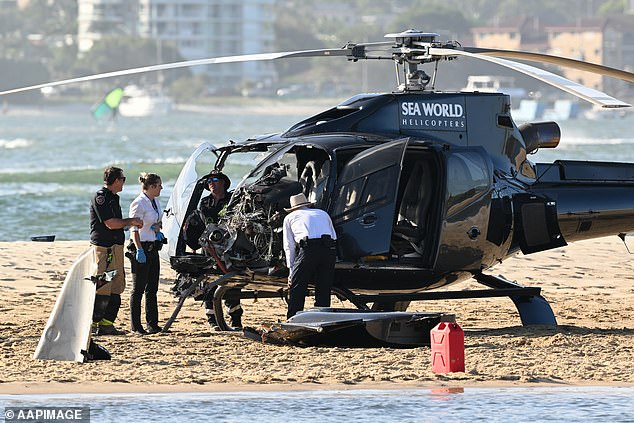 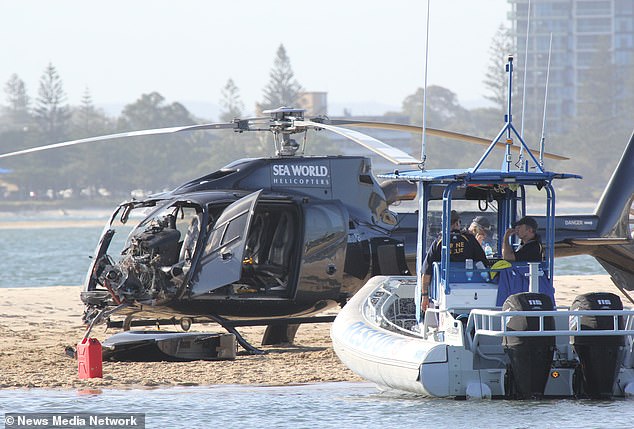 ‘We and the entire flying community are devastated by what has happened and our sincere condolences go to all those involved and especially the loved ones and family of the deceased,’ a spokesperson said.

‘We are cooperating with all the authorities including the Australian Transport Safety Bureau (ATSB) and the Queensland Police. As it is now a police investigation we cannot provide any further information at this stage.’

The ATSB said it has already begun an investigation into the collision.

‘Transport safety investigators with experience in helicopter operations, maintenance and survivability engineering are deploying from the ATSB’s Brisbane and Canberra offices and are expected to begin arriving at the accident site from Monday afternoon,’ ATSB Chief Commissioner Angus Mitchell said.