Boris Johnson will hold fresh Brexit talks today after the latest bid to break the deadlock on fishing fell flat.

The Prime Minister is expected to warn European Commission chief Ursula von der Leyen that failure to accept Britain’s right to control its own fishing grounds will sink hopes of a trade deal.

Mr Johnson yesterday urged EU leaders to ‘see sense’ by dropping demands which he said ‘no sensible Government’ could accept.

During a visit to Bolton, he suggested the UK had already made ‘a lot’ of concessions and now needed to see movement from Brussels. ‘Our door is open, we’ll keep talking, but I have to say things are looking difficult,’ he said.

Mr Johnson yesterday urged EU leaders to ‘see sense’ by dropping demands which he said ‘no sensible Government’ could accept. Pictured: Johnson visits Bolton on Friday, where he suggested the UK had already made ‘a lot’ of concessions and now needed to see movement from Brussels

‘There’s a gap that needs to be bridged. The UK has done a lot to try and help and we hope that our EU friends will see sense and come to the table with something themselves, because that’s really where we are.’

His comments came after Michel Barnier warned that there were ‘just a few hours’ left to secure a deal before the EU’s self-imposed deadline tomorrow night.

The EU’s chief negotiator told the European Parliament that the two sides now stand at the ‘moment of truth’ with a ‘very narrow’ path to securing a breakthrough as talks resumed in Brussels.

‘We have very little time remaining, just a few hours, to work through these negotiations if we want this agreement to enter into force on January 1,’ he said. 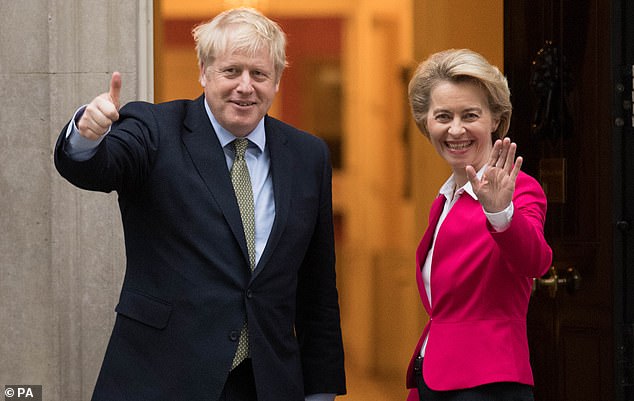 Pictured: Boris Johnson and Ursula von der Leyen, pictured ahead of a meeting in January. The Prime Minister is expected to warn European Commission chief Ursula von der Leyen that failure to accept Britain’s right to control its own fishing grounds will sink hopes of a trade deal

Despite the warning, Mr Barnier and his UK counterpart Lord Frost met for just a half-hour stocktake yesterday.

Mr Barnier held talks with ambassadors from EU coastal states to agree a new offer on fishing after the EU’s derisory initial offer was rejected out of hand.

The EU had initially offered to hand back a maximum of 15 per cent of its share of fishing quotas from UK waters, with cuts phased in over ten years.

Mr Barnier is understood to have suggested a slightly improved offer that would see up to 23 per cent of stocks returned over seven years. 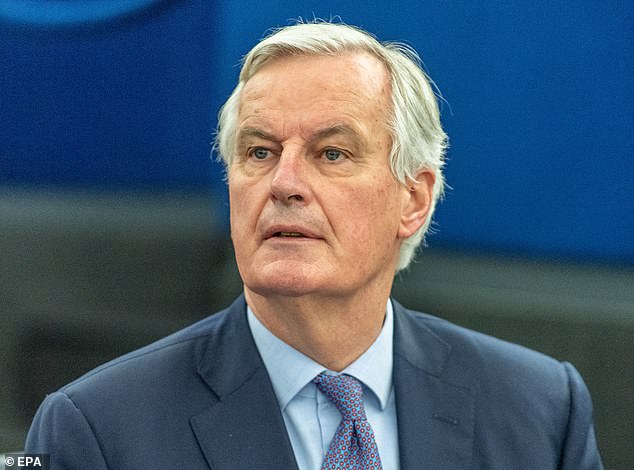 But British sources, who are pushing for 60 per cent of stocks over a transition period lasting no more than three years, described the proposal as ‘unacceptable’. One source close to the talks said: ‘They still don’t get it. This is nowhere near where they need to be for a deal.’

Emmanuel Macron is said to be refusing to allow Mr Barnier to make a more realistic offer on fish. Former Brexit minister David Jones predicted yesterday that the French president’s stance could sink hopes of a deal.

UK sources said EU proposals on state aid also remain ‘unacceptable’. Mr Barnier has demanded that the EU has the right to retaliate if Britain hands out excessive subsidies to domestic industries. But he is so far refusing to reciprocate, meaning the UK would have no redress if EU states handed out lavish subsidies to help their firms undercut British competitors.

Sources on both sides of the Channel believe a deal is possible this weekend, but warned that talks could drag on up to and beyond Christmas – or even collapse altogether.

Sir Edward Heath is the Conservative Prime Minister who sold out Britain’s fishermen in 1973 to take us into what became the European Union.

Boris Johnson does not want to be remembered as the one who sold them out to take us out.

That is one of the main reasons for what appears to be the final stumbling block in the Brexit trade talks: fish.

The idea that the UK cuts all ties with Brussels in less than a fortnight without a trade deal, with the economic chaos, lost jobs, never-ending gridlock in Kent and higher food prices that would ensue, all because we cannot agree about fish seems absurd.

Britain’s 12,000 fishermen represent less than half of 1 per of the UK workforce. Roughly the same number are expected to lose their jobs as a result of the closure of the Debenhams department store chain. 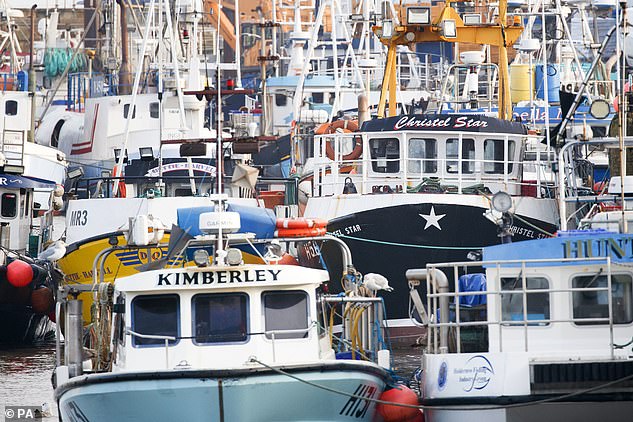 One commentator claimed yesterday that Harrods in London is worth more to the economy than the fishing industry.

Heath is the bogeyman of every Tory Brexiteer. I imagine some have his portrait on dartboards in their shed.

Like many politicians who fought in the Second World War Heath passionately believed in European unity.

Unfortunately, he saw surrendering British fishing waters as a price worth paying to achieve it.

Brussels, not Britannia, has ruled the British coastal waves ever since.

The 700-strong fishing fleet of Grimsby – the world’s biggest fishing port in the 1950s, where fishermen were known as ‘three-day millionaires’ for their spending sprees during their three days off after a successful catch – has dwindled to a few crabbing boats.

In statistical terms, the extent to which EU trawlers plunder our waters is shocking. The French take 84 per cent of English Channel cod – cod, the key part of our fish and chips Friday treat! – compared with our feeble 9 per cent.

In total EU fishing boats haul in eight times more fish in our waters than we do; they take 173 times more herring.

But it is more complex than that.

Why? The Europeans love our most valuable fish, mackerel; we prefer tuna and prawns caught in the Med.

I recall ordering mackerel at a restaurant in a Cornish fishing village years ago and enquiring why I had been served inedible frozen fish when I could see a trawler landing a fresh catch a few yards away in the harbour.

I was told nonchalantly: ‘All the fish caught here are exported to Spain. We only buy frozen.’ 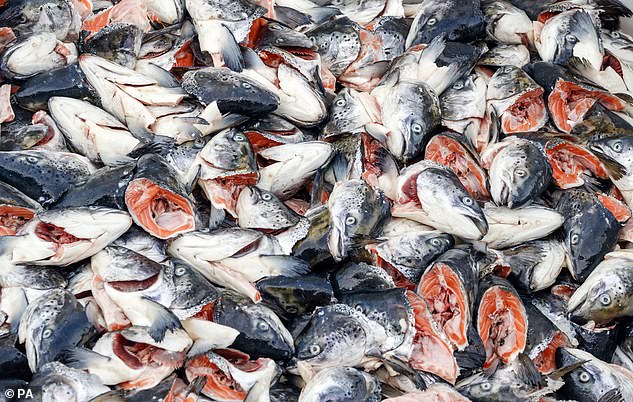 In statistical terms, the extent to which EU trawlers plunder our waters is shocking. The French take 84 per cent of English Channel cod – cod, the key part of our fish and chips Friday treat! – compared with our feeble 9 per cent

Things have improved since then, in no small part to Cornwall’s own fish chef supreme Rick Stein. And the EU trade row is not just about fish, it is about personal and national pride – on both sides of the Channel.

The Prime Minister has woven it into his ‘sovereignty’ argument, with patriotic vows to make Britain an ‘independent coastal state’ once again and ‘recapture our spectacular national maritime wealth.’

It is even more personal for Michael Gove, who persuaded Johnson to campaign to leave the EU and is the Cabinet minister in charge of Brexit negotiations.

During the EU referendum in 2016 Scots-born Gove was visibly moved when he told how his adoptive father’s fish processing business in Aberdeen went bust because of the EU’s Common Fisheries Policy.

Gove is said to fear ‘a new Battle of Trafalgar in the Channel’ with clashes between the Royal Navy and French fishermen.

He regularly reminds Johnson there is another Scottish political dividend for Johnson if he wins his tug of war with the EU over fish: it could stop the break up of the United Kingdom. More than half of Britain’s fishing waters are Scottish.

While most Scots opposed Brexit, Johnson loves to goad Nicola Sturgeon that if Scotland breaks free from the UK, it will never get its cherished fishing waters back from Brussels.

Time is running out to solve the EU deadlock over fish.

Johnson has told European Commission President Ursula von der Leyen he will settle for winning back control of our waters in three years: she has demanded eight years, mainly to appease Emmanuel Macron, who is terrified of upsetting French fishermen.

Most ministers I have spoken to expect them to meet somewhere in the middle. (One pointed out that if we got all our waters back on January 1 we wouldn’t be able to catch the fish anyway because we do not have enough boats.)

With luck Johnson will get most of what he wants.

If he does, more of us need to start developing a taste for mackerel. Close your eyes and it’s not so different to tuna.