A new poll has found Prime Minster Scott Morrison will struggle to keep his job at this year’s federal election as Labor surges to the lead in the primary vote.

The poll by Resolve Strategic, commissioned for The Sydney Morning Herald and The Age, showed the percentage of voters intending to give their primary vote to Labor has increased from 32 to 35 per cent since November.

Those intending to put their No.1 vote to a Coalition candidate has, by contrast,  dropped from 39 per cent to 34 per cent, reflecting a growing dissatisfaction with the performance of Mr Morrison and his team.

The Coalition government’s primary vote has dropped from 39 per cent to 34 per cent, reflecting a growing dissatisfaction with the performance of Mr Morrison and his team 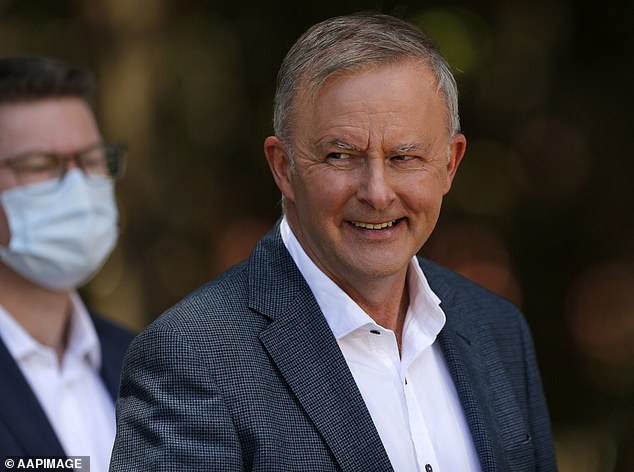 Also worrying for Mr Morrison is that his former double-digit lead over Labor leader Anthony Albanese as preferred prime minister has been dramatically cut.

He is now seen as preferred for the top job by 38 per cent of respondents, while Mr Albanese is at 31 per cent.

The poll results showed Mr Morrison’s government had lost support on a range of issues from its handing of the Covid-19 pandemic to the economy, jobs and health.

The Fairfax poll results echo that of the rival Newspoll, which also had Labor in front of, or equal with, the Coalition on primary vote for its past eight polls.

‘The Coalition needs to be well in front of Labor on primary vote to win because they get a minority of preferences from minor parties and independents, and they’re just not there at the moment,’ Resolve Strategic director Jim Reed told Nine-Fairfax.

‘In fact, this is the first time they have trailed Labor on primary vote in our tracking.’

The Federal election is due by May this year, with pundits speculating it will take place any time from March until May.

While polls serve as one indicator of voter intention, they are by no means an accurate predictor of the eventual result.

Former Opposition leader Bill Shorten and the ALP led the Coalition on most two-party preferred polls immediately before the 2019 election and yet Mr Morrison secured his ‘miracle’ victory.