Scotland’s first new car in over 40 years has been unveiled – and it is described by the company building it as the ‘world’s most capable electric 4X4’.

Called the MK1, it has been launched by Glasgow-based Munro Vehicles and is the first volume production model to come out of the country since the closure of the Linwood Peugeot-Talbot plant near Paisley in 1981.

The start-up – which was only founded in 2019 – has already secured a deal to supply more than 3,000 vehicles to the US for industrial operations, including use in gold-mining locations, from next year.

It has gone on sale priced from £60,000 for the public, promising to deliver unparalleled off-roading capability, 375bhp of power and a range of 190 miles on a full charge.

Scotland’s all-new electric car: The Munro MK1 is the first ‘volume production’ model in the country for over 40 years and promises unparalleled off-road capability from a vehicle powered by batteries only

Munro Vehicles says the MK1 is born to ‘navigate the most challenging terrain’ – and it certainly looks it, with monster-truck-like suspension, a robust boxy body and chunky off-road tyres.

It will go up against hardened off-road vehicles of the likes of the new Ineos Grenadier and more established utilitarian motors like the Land Rover Defender and Toyota Land Cruiser.

It is powered by a new state-of-the-art 280kW electric drivetrain and is aimed primarily at businesses who are commonly forced to operate in difficult landscapes and remote locations – though who might also want to ‘minimise their environmental footprint’.

Markets it is targeting include construction, agriculture, mining, environmental, emergency rescue and remote infrastructure maintenance. It will also be sold to the public for ‘recreational’ use, with off-roading enthusiasts firmly in mind.

The five-door off-roader can transport a crew of five, lug up to a tonne of weight and tow a three-and-a-half tonne load.

Munro will hand-build just 50 examples at its current headquarters in East Kilbride next year, with prices starting from £49,995 excluding VAT – so a fraction under £60,000 for the public – for the five-door ‘Utility’ model.

From 2024, the company is set to move to a new purpose-built factory in central Scotland, where it intends to produce 250 per year initially, rising to 2,500 when it reaches full capacity in 2027.

The plant will also create 300 new jobs in the area.

It will be the first volume-production vehicle output in Scotland since the Linwood plant near Paisley was shut down by Chrysler UK in February 1981.

It had been the assembly line where the Hillman Imp was built between 1963 and 1976, and its closure left mass unemployment in the area – which is famously referenced in the song ‘Letter from America‘ in the Proclaimers’ 1987 debut album, which included the lyric: ‘Linwood no more’. 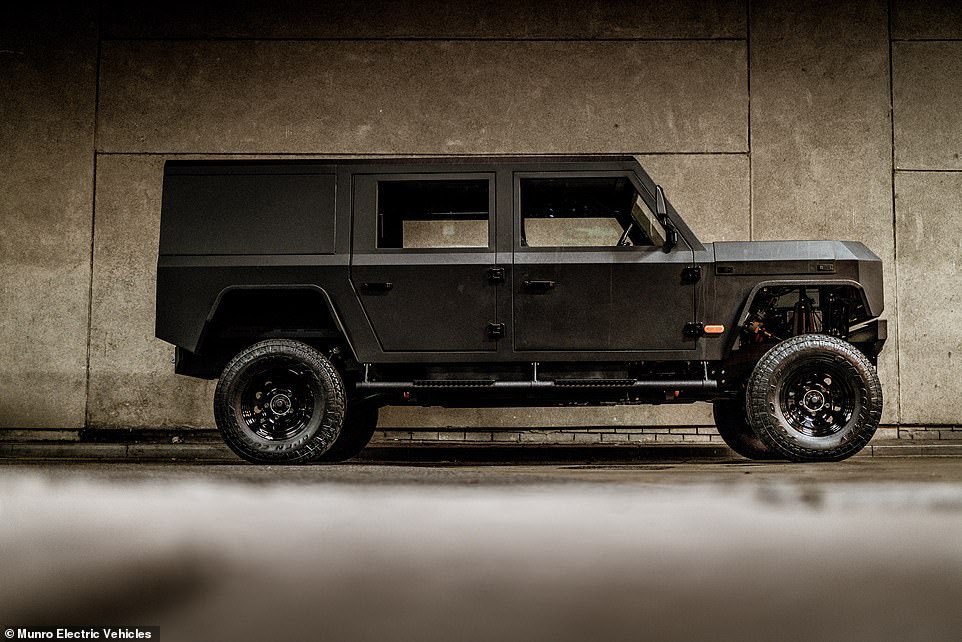 Munro Vehicles says it is born to ‘navigate the most challenging terrain’ – and it certainly looks it, with monster-truck-like suspension, a robust boxy body and chunky off-road tyres.

Driving all four wheels is an ‘axial flux’ electric motor – which is the same e-motor used in some state-of-the-art hybrid supercars and hypercars including the Ferrari SF90 and 296 GTB, as well as the the Koenigsegg Regera.

‘Axial flux electric motors are rarely used in the automotive mass-manufacture sector, where radial flux motors dominate,’ explains Ross Anderson, who is one of Munro Vehicles’ co-founders and now Head of Powertrain.

‘Axial flux motors are quite challenging to manufacture at scale and require a high degree of hand assembly, and they also come at a price premium. However, an axial flux electric motor provides the perfect solution for our application.’

Also known as a ‘pancake’ motor, the compact nature of the axial flux e-motor enables weight to be reduced by half – from 80kg to 40kg in the case of the Munro – compared with a radial flux motor used in most EVs.

It also enables the unit to be located between the two front-seat occupants in front of the vehicle’s bulkhead. This results in a near 50/50 prefect weight distribution, which should make it well-balance for off-road driving. 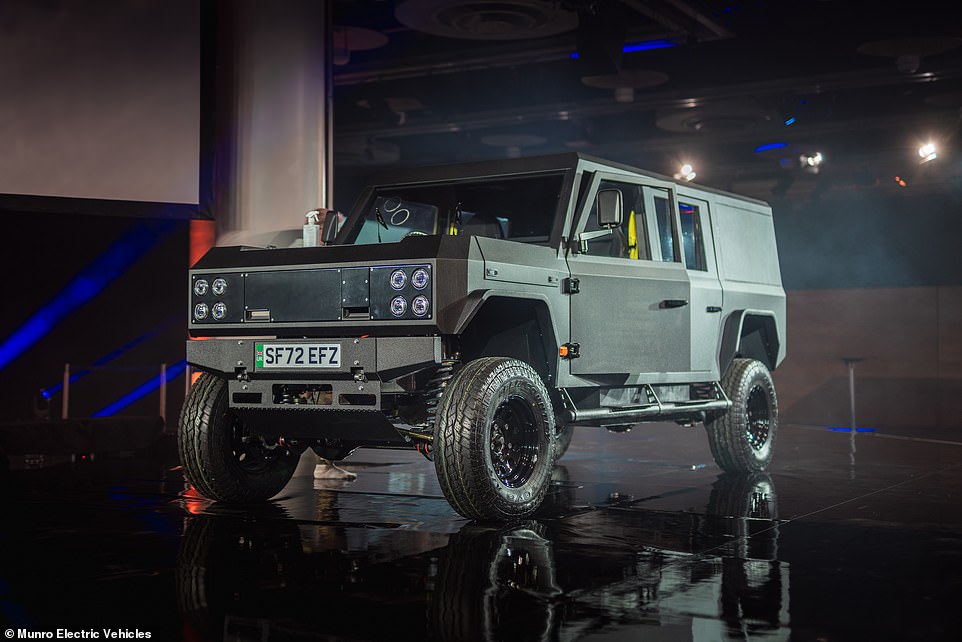 Munro It will hand-build 50 examples at its current headquarters in East Kilbride next year, with prices starting from £49,995 excluding VAT – so a fraction under £60,000 for the public – for this five-door ‘Utility’ model. From 2024 it will move to a new factory in central Scotland and aims to ramp up outputs to 2,500 per annum by 2027

‘A further benefit of the axial flux motor is that it generates exceptionally high amounts of torque when running in reverse,’ Anderson says.

‘When the Munro is in high gear ‘Drive’ mode, lifting off the accelerator provides a degree of regenerative braking via the resistance of the electric motor.

‘In low-gear, ‘Off-Road’ setting, the regenerative braking is much more pronounced. This enables the vehicle to be driven in ‘one-pedal’ mode and provides a highly effective hill descent function to enhance safety and performance off-road.’ 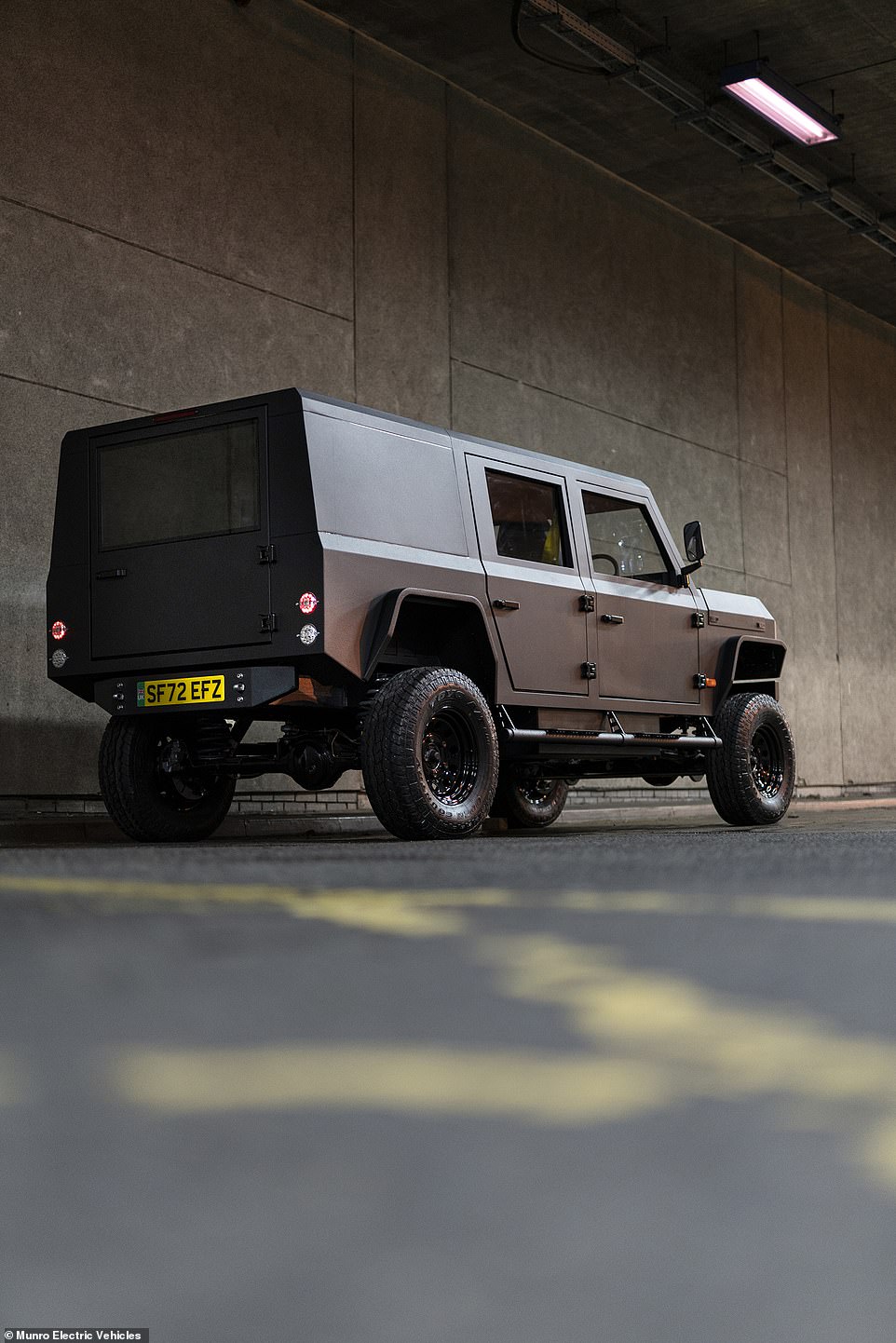 Performance specs include a 280kW/375bhp drivetrain, 0-62mph time of just 4.9 seconds, top speed of 80mph and a full-charge driving range of 190 miles

The maximum driving range is up to 190 miles on a full charge, which the company says translates to 16 hours of graft on site – though whether that’s continuous use is not clarified.

It has a variety of charging options, which gives customers options based on when they are plugging in and how quickly they need to get back out onto the road, gravel, tarmac or whatever surface the vehicle is operating.

It can charge using a DC rapid charger in just over 30 minutes, though it will also be capable of AC charging – 7kW for when the batteries are replenished overnight or 22kW to boost to 100 per cent battery capacity in around three and a half hours during the day.

‘We will refurbish or replace the batteries throughout its lifetime’

The vehicle’s battery pack comprises 35 lithium battery modules mounted in three heavy-duty aluminium boxes underneath the vehicle, which should provide enough protection from any heavy clangs and bumps during working hours. 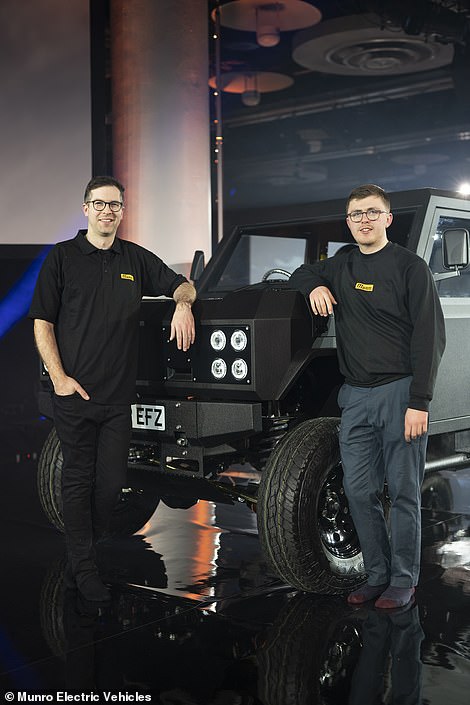 ‘This arrangement ensures it is quick, convenient, and inexpensive to replace individual battery modules if required,’ the brand says.

‘A fully integrated heat pump-based thermal management system bolsters efficiency, and the Munro’s battery pack is guaranteed to deliver 80 per cent of its original energy capacity for at least eight years and 100,000 miles.’

Anderson says that because the Munro MK1 is a vehicle engineered to last several decades, the brand promises to either recondition or replace the battery pack for customers when it shows signs of degrading.

‘This has the added benefit of guaranteeing the future value of our customers’ vehicles,’ he says.

‘We will partner with companies specialising in reuse and recycling to recoup the residual value of the battery pack, which will enable us to fit the latest battery technology at a reasonable cost.’

While it won’t have a dealer network, each vehicle will be sold with a comprehensive five-year/100,000-mile warranty, which Anderson describes as ‘super flexible.’

‘We recognise and respect our customers’ right to repair and maintain their vehicle, and their doing so will not invalidate the warranty,’ it says.

Customers who are unable, or do not wish to look after the vehicle themselves, can either bring their Munro to their local agent, or our service fleet will visit them and carry out the work onsite at their convenience,’ it adds.

Designed to tackle all terrains

‘The 4X4’s long-travel suspension elevates it high enough to provide 480mm of ground clearance, meaning it can wade through water up to a depth of 800mm.

Like the iconic previous-generation Land Rover Defender – and the Ineos Grenadier – it uses a steel ladder chassis that is designed and engineered in house using 5mm thick steel.

‘Boxy’ is the best word to describe its looks.

The brand says the MK1 ‘sits visually apart from any other classic or contemporary vehicle in the sector’.

There’s certainly no doubting its utilitarian shape, which has been penned by Munro’s head of design – and Coventry University Automotive and Transport Design graduate – Ross Compton.

‘At no point have we prioritised visual appeal over purpose,’ he says. And we believe him.

‘We are totally comfortable with the minimalist nature of the Munro’s design,’ he goes on to explain.

‘Ninety nine per cent of what you can see on this truck is there because it serves a function – and nine times of ten it serves more than one function as well.’ 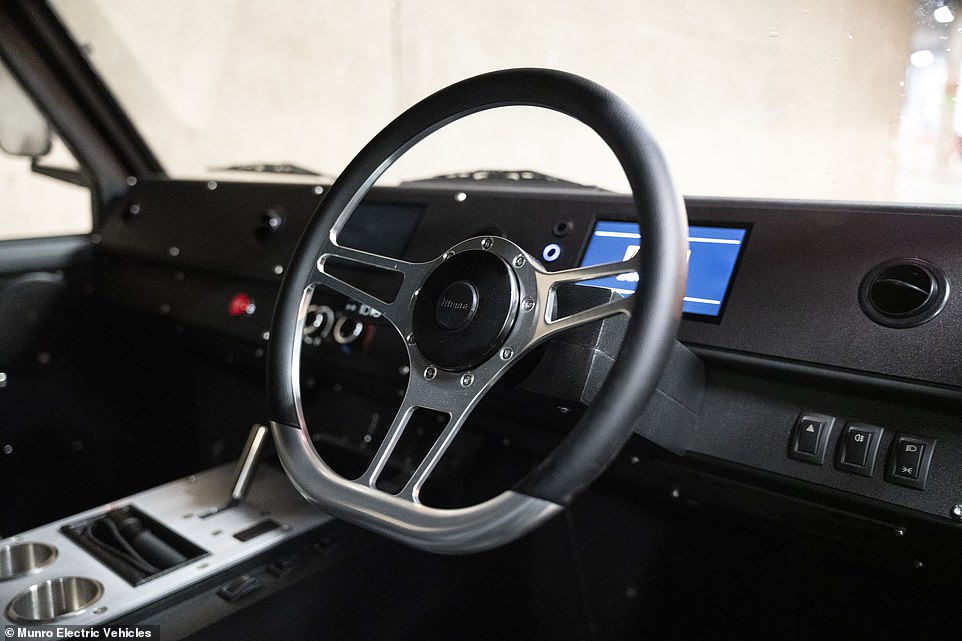 Munro says the MK1 is a vehicle engineered to last several decades, the brand promises to either recondition or replace the battery pack for customers when it shows signs of degrading

Commenting on the overall design, Russell Peterson – the second of the company co-founders and now Munro Vehicles CEO – said: ‘The engineering is unashamedly agricultural in nature.

‘Some people see the term agricultural as potentially derogatory, but at Munro, we certainly don’t.

‘Agricultural vehicles feature some of the most sophisticated technology you can imagine. But above all, they are engineered to do the job, no matter how much punishment they soak up, and to keep doing it year after year.

‘The Munro has been built to the most robust standards possible and to be fully operational in 30, 40, 50 years’ time.’

As well as having the capacity to carry up to 1,000kg, the loadbay has been specifically designed so that a standard Euro pallet will fit in the back.

While the MK1 will hit the market as a five-door model, other variants will follow, the company says.