By Stephen Mcgowan for MailOnline

Steve Clarke admits Scotland are feeling the love of the Tartan Army again after they clinched their place as World Cup play-off seeds.

The biggest and best win of his time in charge saw the Scots beat Euro 2020 semi-finalist Denmark 2-0 – wrecking the runaway group winners’ perfect record – and securing a one-off semi-final at Hampden in March.

John Souttar capped a stunning comeback from his injury hell by claiming his first international goal before half-time.

Man of the match Che Adams sent Hampden into raptures with a clinical finish for the killer second goal four minutes from time against the team rated tenth in the world rankings.

Confessing the result and performance was the best of his reign, an emotional Clarke said: ‘When I came into this job there was a lot of negativity around. Now there’s a lot of positivity and the players love it.

‘The players like to be loved and they feel the love of the crowd which is great. 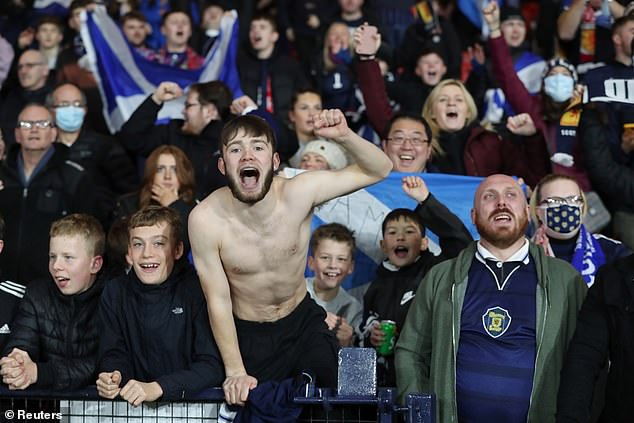 ‘The performance level, with and without the ball over the course of the 90 minutes, was really good. We had a period in the first half when we had control of the game against a good team.

‘Yes, they were missing one or two players but we were missing four or five. There’s good depth in our squad and it’s going to be hard to pick a squad in March! Hopefully they’re all still fit and make it difficult for me.

‘But it was good. The crowd feeds off it and the players feed off the crowd as well,’ said Clarke, celebrating six wins in a row in competitive games for the Scots for the first time since 1930.

With five of his starters one booking away from missing the play-off semi, fears of a card-happy Spanish ref proved unfounded. ‘And no yellow cards,’ beamed Clarke, ‘which everyone was fixated on.

‘We wanted to put on a good performance to finish what has been a good campaign. We managed to do that in front of another fantastic Hampden crowd. It was a good night for everybody.’

Delighted for Souttar after the Hearts defender’s spectacular return to the Scotland team for the first time in three years following three ruptures of his Achilles, Clarke said: ‘John Souttar can be the story of the night for me. To come back from the injuries John has had over such a prolonged period of time, it was a bonus just to get in the squad. I know how happy he was to get the chance to play tonight.

‘The goal was the icing on the cake for him. His performance was outstanding. I gave him a big hug when he came off the pitch.

‘I was quite emotional. You understand when you’ve been a player yourself and been involved in the game for so long, how difficult it is on the road back. I’m absolutely delighted for John.’ 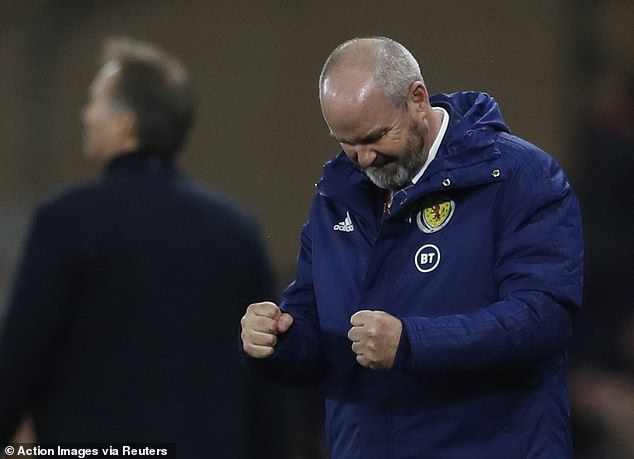 Victory removed any doubt over Scotland’s status as one of six seeds among 12 teams in the play-offs.

Poland’s defeat to Hungary meant it might have happened anyway, albeit Italy’s slide into the play-offs complicated the task of reaching Qatar further.

Unconcerned by who the Scots land in the draw a week on Friday, Clarke shrugged: ‘We have to wait and see who we get. But it’s six wins in a row. Unfortunately for me we now go into a long four-month winter hibernation.

‘We look forward to the play off. We think we’re a decent team, we are improving and hopefully we can show that in March.

‘I think 2021 has been a decent year for us. If we can surpass that in 2022 maybe we’ll get the ultimate aim of going to Qatar but there are two tough games to go. Let’s see what next year brings.’

Denmark boss Kasper Hjulmand praised the Scots after his side fell short of ten wins from ten, saying: ‘We didn’t show our best tonight and Scotland deserved to win. We have seen a progression with the Scottish team from the Euros until now. They have done a quality job and have a connection with the people like we do with our own fans.

‘Scottish football is also up for something great in 2022 and I definitely hope they join us at the World Cup.’