Unvaccinated children getting infected with Covid isn’t an issue because they face such a vanishingly rare chance of falling seriously ill, a scientist said today.

He revealed about half of youngsters have already had the virus but insisted others would get it ‘sooner or later’. Justifying the decision to roll-out jabs to millions of 12-15 year olds, Professor Whitty added: ‘Vaccination will reduce that risk’.

But one academic today criticised the CMO’s reasoning, arguing the majority would probably still get infected even if they were inoculated.

Professor David Livermore, a medical microbiologist at the University of East Anglia, said the virus has evolved to be extremely transmissible — and that vaccines aren’t perfect at blocking the pathogen.

And he said natural infection would be preferable to jabs for children because the virus poses little-to-no-threat of causing serious illness in youngsters, whereas the vaccines aren’t risk-free.

Some studies even suggest immunity from infection is stronger than that produced by the vaccines.

Despite the chief medical officers who advised the Government to extend the rollout claiming they did so after assessing the benefits to children themselves, critics view the move as one intended to protect adults by reducing the risk of transmission.

But a host of scientists are now suggesting the virus now amounts to little more than a common cold for the vast majority of vaccinated adults. 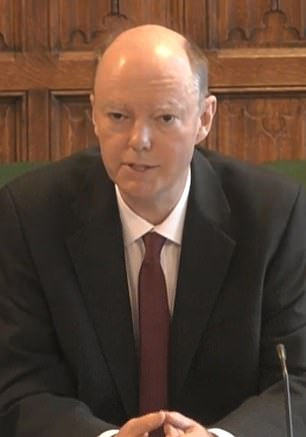 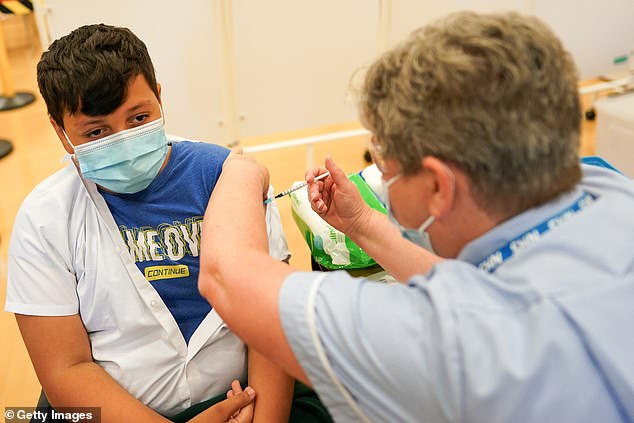 Felix Dima, 13, from Newcastle, receives the Pfizer vaccine at the Excelsior Academy in Newcastle-upon-Tyne

Dame Sarah Gilbert, one of the chief scientists behind the AstraZeneca vaccine, last night claimed viruses tend to ‘become less virulent as they circulate’ through the population.

And Professor Tim Spector, an epidemiologist at King’s College London, today said jabs had already drastically changed Covid’s tell-tale symptoms, effectively turning it into a bad cold for most who catch it.

He said other warning signs like a sore throat, runny nose and sneezing should be added to the official list of symptoms.

What is the risk to children if they catch Covid?

Most children who become infected with the virus have no symptoms, or mild symptoms such as low-grade fever, fatigue, and a cough.

However children with underlying health conditions may be at an increased risk of a condition called multisystem inflammatory syndrome.

Multisystem inflammatory syndrome  can lead to life-threatening problems with the heart and other organs.

Symptoms of the condition can include fever, stomachache, rash, vomiting, cracked lips, a swollen lymph node in the neck and sleepiness.

This year, researchers found children face an ‘extremely low’ one in 500,000 risk of dying from the coronavirus.

One of the study’s showed the coronavirus contributed to 0.8 per cent of the 3,105 deaths in children from all causes in the first year of the pandemic.

They found the under-18s who died were more likely to be teenagers than younger children, showing that the risk from the virus increases with age.

Higher proportions of Asian and black children died from the virus but these deaths were ‘still extremely rare’, they said.

A second study found that 251 young people in England were admitted to intensive care with Covid from March 2020 to February this year, which equates to around a one in 50,000 risk.

Of these patients, 91 per cent had one or more underlying health conditions.

A third study, which was led by Dr Rachel Harwood at the University of Liverpool, supported the findings of the other papers.

Professor Livermore told MailOnline: ‘It is true that schoolchildren will mostly catch Covid, if unvaccinated. But it is a poor reason to vaccinate them.

‘First, vaccines provide only limited protection against infection and transmission, so children are going to be infected over time anyway regardless of whether they have been vaccinated. At most, vaccinating them will only delay this.

‘Secondly, Covid infection does healthy children little harm. They suffer mild disease and recover swiftly. The hazard from Covid is largely for the elderly, not children.

‘Thirdly, evidence from Israel shows natural immunity — which children will acquire from infection — is 13-fold more protective than vaccination.’

He said infection and reinfection multiple times could allow children to reach a level of immunity where Covid becomes just like a common cold.

But he warned immunity from the vaccine could prevent this process occurring.

Professor Livermore added: ‘As children we encounter many existing respiratory viruses. We spend winters with repeated sniffles and runny noses.

‘However, through infection, fading immunity and reinfection we develop a balance with these viruses, which then sees us through adulthood with just the occasional cold.

‘Today’s healthy children have the potential to co-develop with Covid in exactly the same way. For them as adults it will be one more sort of common cold.

‘The hazard is that vaccination will disrupt their development of this natural balance, for no benefit.

‘If you add this risk to the side-effect hazard, notably of myocarditis in boys, I can see no good reasoned to vaccinate healthy children.’

And asked whether vaccines have reduced the severity of the disease in adults enough already to allay fears the back-to-school wave of infections could be dangerous for parents, Professor Livermore said: ‘Absolutely.

‘The vulnerable have been protected as well as possible from severe disease with vaccines and the virus is now endemic. Essentially it now just has to bed in.

‘Repeated exposure, mild infection and boosters for the vulnerable will allow us to develop an immune “defence in depth”.

‘We really shouldn’t worry about its circulation in schools. It is doing little harm there.’

Being grilled by politicians about his decision to recommend all over-12s are given Covid jabs yesterday, Professor Whitty insisted the move was made purely due to the benefits children would get.

He denied the advice — which overruled guidance from No10’s top vaccine advisory panel which recommended youngsters weren’t jabbed — was political.

Professor Whitty said: ‘The great majority of children who have not currently had Covid are going to get it at some point.

‘It won’t be necessary in the next two or three months but they will get it sooner or later because this is incredibly infectious. Vaccination will reduce that risk.’

He added that while the vaccination programme would cause some disruption to schools, it would be outweighed by the likely disruption caused if children caught Covid.

When asked what proportion of children had already had Covid, he replied: ‘It varies by age and it does also vary by setting, but I think if we go for roughly half I think that is a reasonable stab at this.

‘That’s half over the period of the entire epidemic to date, and we’ve got quite a way to run.

‘We’re running into winter so there’s still quite a lot of damage that could be done in terms of disruption.’

Asked whether children would receive longer-lasting immunity from natural infection or the vaccine, Professor Whitty said it would be ‘broadly similar’.

But he said immunity of both kinds would be longer in children than in adults.

Meanwhile, Dame Sarah suggested the virus would likely mutate to become less deadly and begin to resemble the common cold.

She said ‘there aren’t very many places for the virus to go to have something that will evade immunity but still be a really infectious virus’. 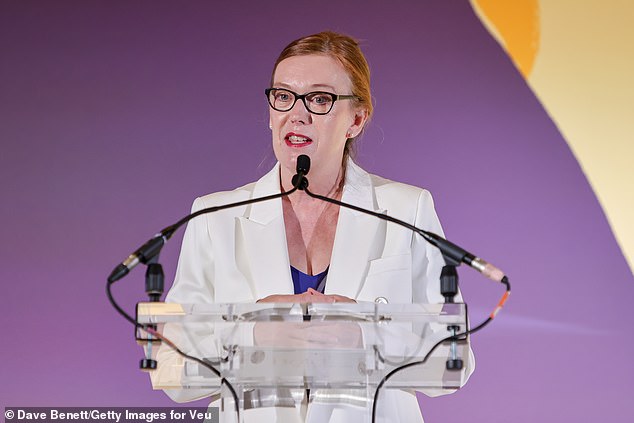 She said viruses tend to ‘become less virulent as they circulate’ through the population, adding: ‘There is no reason to think we will have a more virulent version of Sars-CoV-2’.

Speaking at a Royal Society of Medicine seminar, Dame Sarah said: ‘We already live with four different human coronaviruses that we don’t really ever think about very much and eventually Sars-CoV-2 will become one of those.

‘It’s just a question of how long it’s going to take to get there and what measures we’re going to have to take to manage it in the meantime.’

But he was less confident vaccinated adults would not be infected with the virus and emphasised they could still be at risk of serious illness.

Scientists have always admitted the vaccines are not perfect and immunity wanes over time.

NHS bosses have already begun a booster drive campaign in order to protect the most vulnerable this winter.

Professor Spector said: ‘While it’s true that Covid in children is mostly mild, the real issue is their ability to pass on the virus to those who are most vulnerable.

‘ZOE Covid Study data shows protection waning in those who were first in line for a vaccine, and so their risk of getting infected is rising.’