Top scientists today cast doubt over Boris Johnson’s 10pm curfew on pubs, bars and restaurants to control coronavirus, warning the drastic move is unlikely to curb the spread of the disease.

One epidemiologist argued coronavirus ‘doesn’t understand the clock’, questioning why ministers have ordered all hospitality businesses to shut at that time.

And other infectious disease experts fear the curfew will be ineffective because it runs the risk of ‘compressing activity’. People would all leave at the same time and visits may end up being concentrated into a shorter period, making places busier, instead of being staggered over hours.

Professor Linda Bauld, a public health expert at the University of Edinburgh, warned a lack of ‘carrots’ in the policy risks ‘rising levels of non-compliance’ from venues and ‘further declines in public support for the UK government’.

But some academics praised Number 10 for imposing the curfew, saying it is needed to avoid ‘greater spread of the virus’ and to simultaneously protect businesses and the economy.

They argued shutting bars simply keeps people less drunk, meaning they are sober enough to remember to put on a face covering on the way or home or stick to other social distancing measures.

The Prime Minister’s curfew — announced in the Commons today — sparked an immediate industry backlash. The UK Hospitality group said it was ‘another crushing blow’ as many businesses were just treading water following the shutdown in March, while the Campaign for Pubs called for financial support for the sector.

Greg Mulholland, the group’s campaign director, said: ‘As it is, most pubs were only getting back on their feet and many were not yet trading profitably and this latest news will make it impossible for some publicans to carry on.’

Some scientists argue the 10pm curfew does not go far enough, while others congratulated the Government for their ‘clear’ messaging. Pictured is an evening out in Soho 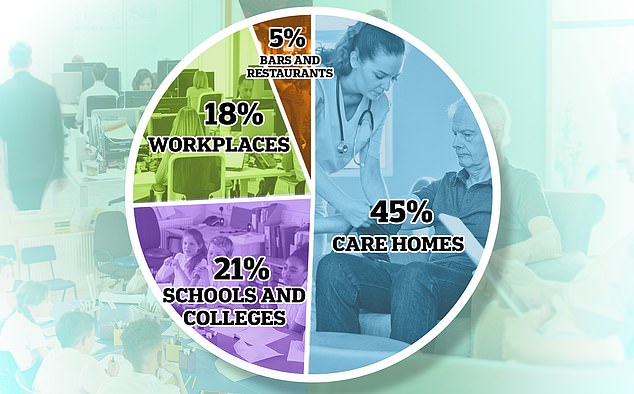 Public Health England data reveals that of the 729 outbreaks in the week to September 13, only five per cent occurred in food outlets such as restaurants and pubs

DO CURFEWS WORK AT SLOWING THE SPREAD OF THE VIRUS?

From Thursday evening, bars, pubs and restaurants across England will be required to close from 10pm every night.

The move is an ‘intermediate’ step in the fight against the virus, and follows in the steps of Thailand.

When Thailand imposed a 10pm to 4am curfew on April 3 it was counting just over 100 cases of coronavirus a day. By the time the curfew was removed on June 15 this number had dropped into the low tens.

Although the country’s success has been attributed to the curfew, some scientists dispute this, saying that the lockdown and other social measures in force at the time had a greater impact.

The UK is hoping that its curfew may help it mirror the success of the South-east Asian nation.

‘There have been outbreaks linked to nightclubs and to bars and restaurants,’ she said. ‘We’ve known this for months.’

‘The longer people are in these venues, the more they probably let their guard down and the mix of social distancing and alcohol is not a good one despite the best efforts of publicans and venue owners.’

Behavioural expert Professor Susan Michie, a member of the Scientific Advisory Group for Emergencies (SAGE), said she thought the 10pm time had been chosen to balance the needs of the night-time economy with the need to control the virus.

Questioning the Government’s decision to impose a 10pm curfew, Dr Michael Head, a global health expert at the University of Southampton, said he expects it to have ‘little or no impact’ on the spread of coronavirus.

‘A far better approach would be to shut all pubs and restaurants, and properly compensate businesses and employees for the loss of income,’ he said.

‘This would ensure that public health is prioritised, and business and staff are in a stronger economic position when they are allowed to resume.’

Professor Paul Hunter, infectious disease expert at the University of East Anglia, said it is ‘doubtful’ the 10pm curfew and other measures – including table-only service and working from home – will be sufficient to prevent a second wave.

‘It is doubtful that measures currently being enacted will be sufficient to reduce the R value to below one much before this side of Christmas,’ he said.

‘Given that it is now almost certain we will see big increases in the epidemic over the next two to three months we really need to be focusing on how better to identify, protect and support our more vulnerable citizens.

‘This has been a big omission in the public debate over recent weeks and it is disappointing that such an important issue was not discussed in the PM’s speech.’

Dr Stephen Griffin, associate professor in the school of medicine at the University of Leeds, said he was ‘less convinced’ the curfew would be effective as it ‘runs the risk of compressing activity and having people leave at a single time in large numbers’.

‘The concern is that an unfavourable public response to such measures will erode compliance on the fundamental issues of maintaining space and ventilation, wearing face coverings indoors and in crowded areas, and maintaining good hand hygiene,’ he said.

Voicing her opposition, Professor Bauld, said the Government’s new restrictions are ‘not as stringent as might have been expected’.

‘Fines will rise for individuals and businesses that don’t comply,’ she said. ‘The police will be tasked with enforcement and it was mentioned that the military could be called on if needed.

‘But financial support for those required to self-isolate will be limited and there are still no signs that furlough will be extended, despite the inevitable economic consequences of ongoing restrictions.

‘Urgent attention is needed regarding support packages if these new measures are to succeed.’ 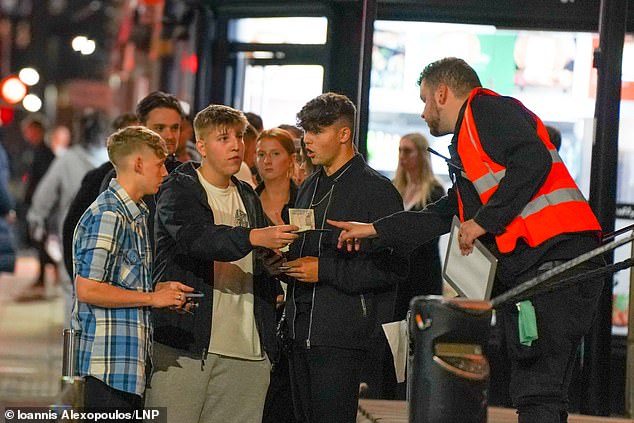 The measures have been brought in because alcohol makes people less risk-averse, one scientist said. Pictured are a group of young men in Sheffield on Sunday night

RESTRICTION WILL LEAD TO BOOM IN HOUSE PARTIES, INDUSTRY WARNS

Hospitality bosses warned that a 10pm curfew introduced today for pubs would exacerbate lockdown ‘bad behaviour’ with no track and trace at house parties.

The curfew, which will begin on Friday in Scotland and from Thursday in England, was introduced in a bid to stop coronavirus from spreading.

But hospitality bosses north of the border warned it would be a death knell for many businesses – and would just exacerbate house parties with no regulation.

Stephen Montgomery, spokesman for the Scottish Hospitality Group (SHG), said: ‘We are now staring into an abyss.

‘There is a real concern that the hospitality industry is being singled out for restrictions with very little evidence to support a link to coronavirus transmission.

‘We are already seeing an explosion of house parties and closing bars and restaurants at 10pm will only increase this.’

But other scientists lined up to congratulate the Prime Minister on his ‘very clearly’ messaging that, they argued, will help stop the disease in its tracks.

Backing the measures Dr Jennifer Cole, biological anthropologist at Royal Holloway University, said that one of the biggest influences over people observing social distancing, and hence controlling the spread of the virus, was alcohol.

‘The more drunk you are, the less inhibited and less risk-averse you are,’ she said.

‘Closing the bars and restaurants at 10pm simply keeps people more sober. It gives them plenty of time for a meal, or a quick drink with friends after work, but means they are likely to be sober enough to remember to put on a face-covering on the train or bus home, and to be careful around elderly relatives when they get home.

‘It gives restaurant and bar staff time to give the venue a thorough clean when the last customers have left, without having to work unreasonably late. This means that a lot of the risk is reduced.’

Dr Rachel McCloy, associate professor in applied behavioural science at the University of Reading, added that the Government appears to be taking a more ‘calculated and careful’ approach with its restrictions.

‘What we learnt from how people responded to the last lockdown appears to have been heeded,’ she said.

‘Last time, the panic buying and over-reaction by some people frightened by the situation was matched by apathy and distrust by others. The complexity of the range of rules that followed as lockdown was relaxed gave the impression that the Government didn’t really know what was going on or how best to respond.

‘(But) now, some of this messaging has been simplified and illogical loopholes have been closed – for example, shoppers having to wear masks when they were not compulsory for retail staff.

‘The “Rule of Six” is also a simplification, although it has suffered in its application to some situations.’

Public Health England data reveals that of the 729 outbreaks in the week to September 13, only five per cent occurred in food outlets such as restaurants and pubs – 45 per cent were in care homes, 21 per cent in schools and 18 per cent in places of work. 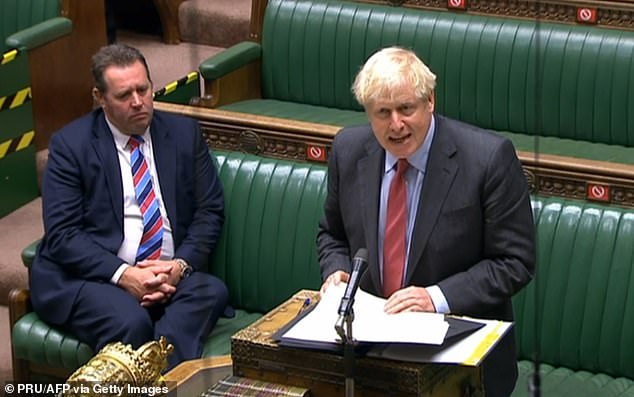 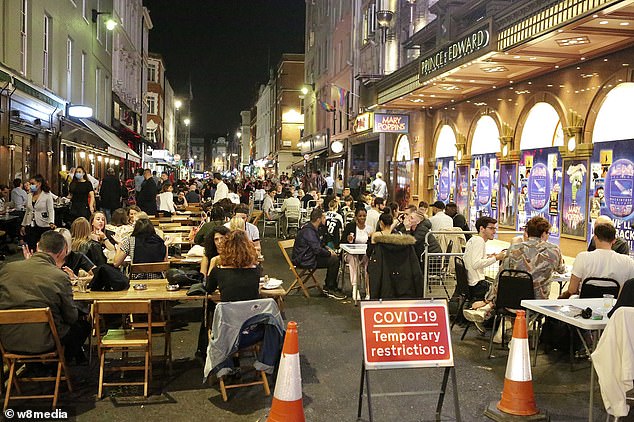 Exasperated hospitality sector bosses are crying out for clarity over whether the 10pm curfew is the point they must clear the premises (Pictured: Soho in London last night)

Hospitality bosses have accused ministers of unfairly singling them out for restrictions, and warned a curfew will lead to a boom in illegal house parties where the virus is more likely to spread.

Wetherspoons founder Tim Martin said: ‘The curfew doesn’t even stand up to five minutes consideration by an intelligent person because if you look at the stats… there are relatively few transfers of infections in pubs.’

Kate Nicholls, chief executive of trade body UK Hospitality, urged the Government to heed its own statistics because the curfew could take a sledgehammer to the industry which is already ‘on its knees’.

She said this morning: ‘People will think it’s not that significant, but it really will have a big economic impact on jobs, not just on pubs, but also for cafes and restaurants.’

Stephen Montgomery, spokesman for the Scottish Hospitality Group (SHG), said: ‘We are now staring into an abyss.

‘There is a real concern that the hospitality industry is being singled out for restrictions with very little evidence to support a link to coronavirus transmission.

‘We are already seeing an explosion of house parties and closing bars and restaurants at 10pm will only increase this.’

The rule change will apply on Thursday in England and on Friday in Scotland, almost two weeks after the ‘Rule of Six’ came in to force.