Scientists have identified the most extreme heatwaves ever recorded globally, some of which went almost unnoticed when they occurred decades ago.

According to the University of Bristol experts, the most extreme heatwave ever was in south-east Asia in April 1998.

Meanwhile, the western North America heatwave last summer was only the sixth most severe heatwave.

For their research, the experts used a method that calculates how extreme heatwaves are relative to local temperature, rather than just where mercury readings were the highest.

Map showing the magnitude of the greatest extreme since 1950 in each region, expressed in terms of deviation from average temperatures, with climate change trend removed. Darker colours indicate greater extremes

MOST EXTREME HEATWAVES EVER

According to the study authors, heatwaves are projected to get hotter in future as climate change worsens.

Earlier this year, the Met Office increased the heatwave threshold for eight English counties, seeing as levels are designed to be relative to the current climate.

‘The recent heatwave in Canada and the United States shocked the world,’ said lead study author, climate scientist Dr Vikki Thompson at the University of Bristol.

‘Yet we show there have been some even greater extremes in the last few decades.

‘Using climate models, we also find extreme heat events are likely to increase in magnitude over the coming century – at the same rate as the local average temperature.’

2021’s western North America heatwave was the most deadly weather event ever in Canada, resulting in hundreds of fatalities.

For the study, researchers ranked heatwaves relative to the local temperature of where they occurred, on the basis that events so far outside their natural variability are arguably more ‘extreme’.

A heatwave is an extended period of hot weather relative to the expected conditions of the area at that time of year, which may be accompanied by high humidity.

A UK heatwave threshold is met when a location records a period of at least three consecutive days with daily maximum temperatures meeting or exceeding the heatwave temperature threshold.

The threshold varies by UK county.

Results showed the top three hottest ever were in Southeast Asia in April 1998, Brazil in November 1985 and Southern US in July 1980.

So even though southeast Asia in April 1998 didn’t register as high on the mercury readings as others, it was ‘most extreme’ due to being outside local variability as an indicator of potential harm caused.

‘The western North America heatwave will be remembered because of its widespread devastation,’ said Dr Thompson.

‘However, the study exposes several greater meteorological extremes in recent decades, some of which went largely under the radar likely due to their occurrence in more deprived countries.

‘It is important to assess the severity of heatwaves in terms of local temperature variability because both humans and the natural ecosystem will adapt to this.

‘So in regions where there is less variation, a smaller absolute extreme may have more harmful effects.’ 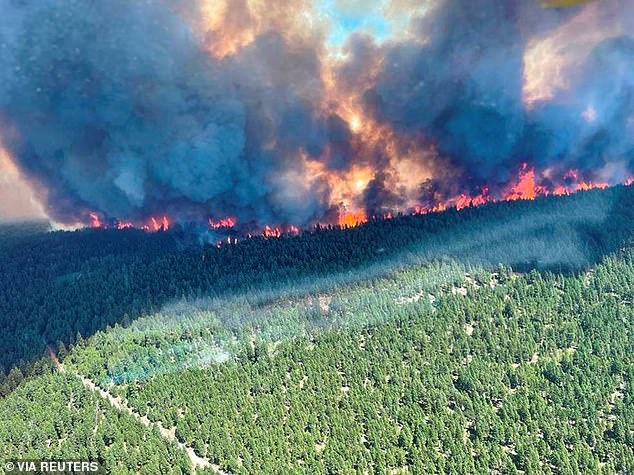 Smoke and flames are seen during the Sparks Lake wildfire at Thompson-Nicola Regional District, British Columbia, amid the extreme weather in 2021

The team also used sophisticated climate model projections to anticipate heatwave trends in the rest of this century.

The modelling indicated levels of heatwave intensity are set to rise in line with increasing global temperatures.

Although the highest local temperatures do not necessarily cause the biggest impacts, they are often related.

Improving understanding of climate extremes and where they have occurred can help prioritise measures to help tackle this in the most vulnerable regions, they say. 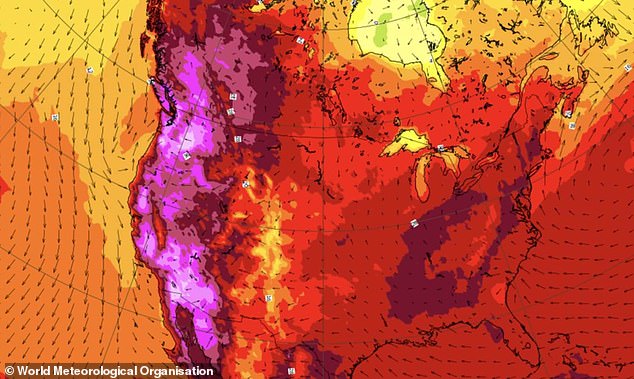 ‘Climate change is one of the greatest global health problems of our time,’ said co-author Dann Mitchell, a professor in climate sciences at the University of Bristol.

‘We have showed that many heatwaves outside of the developed world have gone largely unnoticed.

‘The country-level burden of heat on mortality can be in the thousands of deaths, and countries which experience temperatures outside their normal range are the most susceptible to these shocks.’

The new findings have been published today in Science Advances.

ENGLAND IS HEATING UP! MET OFFICE RAISES THE HEATWAVE TEMPERATURE THRESHOLD ACROSS EIGHT COUNTIES IN RESPONSE TO CLIMATE CHANGE

The temperatures needed for a heatwave to be officially declared have been increased across eight English counties, the Met Office announced in March.

Heatwaves are called when an area has at least three days in a row with daily maximums hitting or exceeding a certain temperature threshold.

Levels are designed to be relative to the current climate, but as global warming is pushing up UK temperatures, thresholds have now increased for eight English counties ahead of the summer months.