The core traits of A**HOLES: Scientists identify key characteristics including manipulation, aggression, and entitlement – and say middle-aged men are most likely to have them

Whether it’s a horrible manager at work or a particularly unlikeable ex-partner, everyone knows at least one person they’d describe as an a**hole.

Now, scientists from the Franklin College of Arts and Sciences have revealed the key characteristics of a**holes – and say middle-aged men are most likely to have them.

The core traits include manipulation, aggression, and entitlement, as well as irresponsibility and anger.

What are the Big Five personality traits?

The ‘Big Five’ personality traits are:

Openness – People who are generally open have a higher degree of intellectual curiosity and creativity.

They are also more unpredictable and likely to be involved in risky behaviour such as drug taking.

Conscientiousness – People who are conscientious are more likely to be organised and dependable.

These people are self-disciplined and act dutifully, preferring planned as opposed to spontaneous behaviour.

Extroversion – These people tend to seek stimulation in the company of others and are energetic, positive and assertive.

They can sometimes be attention-seeking and domineering.

Agreeableness – These individuals have a tendency to be compassionate and cooperative as opposed to antagonistic towards other people.

Sometimes people who are highly agreeable are seen as naive or submissive.

Neuroticisim – People with high levels of neuroticism are prone to psychological stress and get angry, anxious and depressed easily.

More stable people are calmer but can sometimes be seen as uninspiring and unconcerned.

In the study, the team set out to identify the personality profile of the typical a**hole.

Almost 400 participants were asked to describe the ‘biggest a**hole’ in their life, including how close they were to them, their relationship, and their top three a**hole behaviours.

The results revealed that manipulation, aggression and entitlement were the most common traits, along with irresponsibility.

According to the researchers, these traits are also seen in psychopathic, antisocial and narcissistic personality disorders.

‘People didn’t really have very much trouble figuring out who the “biggest a**hole” in their life was,’ said Brinkley Sharpe, lead author of the study.

‘About half of the “a**holes” were participants’ former romantic partners, old bosses or estranged family members.

‘On average, participants didn’t think that they were very close to these individuals, which makes sense because these people are being described as having pretty aversive behaviours.’

Surprisingly, about a third of respondents said the biggest a**hole in their life was a current co-worker, friend, or even romantic partner.

The results revealed that most of the participants believed the a**holes in their lives were aware that their behaviour bothered people – but didn’t care enough to bother changing.

‘It’s interesting to me that the behaviours people were keying in on sort of run the gamut,’ said Ms Sharpe.

‘When we talk about personality, the a**hole was described as somebody who is not agreeable and is angry.

‘When we talk about behaviours, the a**hole was not necessarily being antagonistic toward people, but they just didn’t really care about what others were thinking or how they were perceived by others.’

The a**holes were also described by many participants as irresponsible, angry and bigoted.

‘Some of the responses were pretty violent. We had a couple where the individual had done something that was frankly criminal,’ Ms Sharpe added. 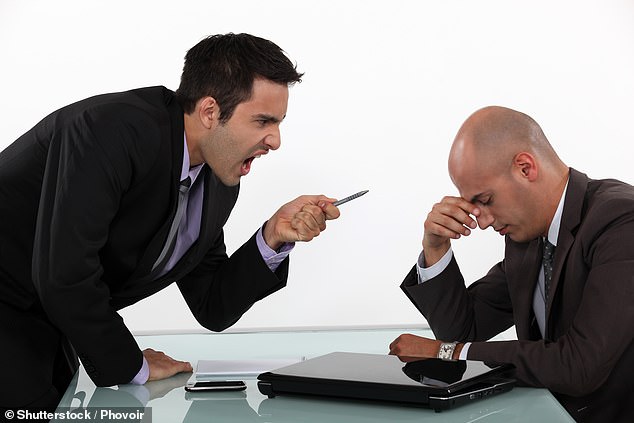 The results revealed that manipulation, aggression and entitlement were the most common traits, along with irresponsibility (stock image)

However, other responses were more a sign of the times, according to the researchers.

For example, some people were considered a**holes for not wearing a face mask, or voting for Donald Trump.

‘There’s clearly a lot of variation in how people use this word,’ Ms Sharpe concluded.

‘I think the implication of the study is that insults matter. We do mean certain things by using them or we associate them with certain characteristics.’

DECODING THE PSYCHOPATH’S STARE: AI CAN DETECT SIGNS OF PSYCHOPATHY BASED ON YOUR HEAD MOVEMENTS, STUDY FINDS

Scientists have developed an artificial intelligence (AI) system that can detect signs of psychopathy based on head movements.

The algorithms measured the head movements of 507 inmates during recorded conversations, varying in length from one to two hours.

To estimate the head pose, all the frames in the videos were extracted as individual images, allowing the algorithm to work with the face in each frame of the video stream.

Using a 20-item checklist, PCL-R scores a person from one to 40. Anyone who scores 25 or over in the UK is deemed a psychopath.

‘As predicted, dwell times indicate that those with higher levels of psychopathic traits are characterised by more stationary head positions, focused directly towards the camera/interviewer, than were individuals low in psychopathic traits,’ the experts say in their paper.