The idea of Earth’s magnetic poles flipping may sound like the plot of the latest science fiction blockbuster – yet many scientists believe it could happen at any time.

However, the last one took place about 780,000 years ago, causing many scientists to fear a flip could be imminent.

If a magnetic flip does happen, some experts claim if could render some parts of Earth ‘uninhabitable’ by knocking out power grids.

Researchers from Lund University have pieced together data on Earth’s geomagnetic field strength stretching back 9,000 years and say there’s no evidence a reversal is on the cards. 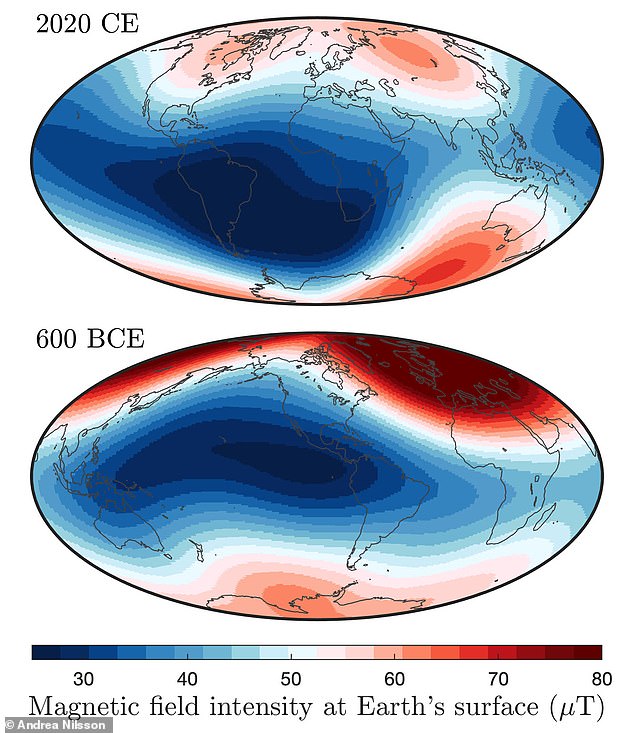 Why do some people think Earth’s magnetic poles are about to flip?

However, some believe a flip is overdue as the last one was about 780,000 year ago.

In a report published in 2018, Daniel Baker, director of the Laboratory for Atmospheric and Space Physics at the University of Colorado, Boulder, claimed there are signs of a reversal taking place.

He says if this reversal happens, it is likely to render some areas of the planet ‘uninhabitable’ by knocking out power grids.

His comments were made in an in-depth Undark report written by Alanna Mitchell, who has a new book about the topic titled ‘The Spinning Magnet: The Electromagnetic Force that Created the Modern World and Could Destroy It’.

Ms Mitchell writes: ‘The dangers: devastating streams of particles from the sun, galactic cosmic rays, and enhanced ultraviolet B rays from a radiation-damaged ozone layer, to name just a few of the invisible forces that could harm or kill living creatures.’

Earth has a fierce molten core that generates a magnetic field capable of defending our planet against devastating solar winds.

This protective field extends thousands of miles into space and its magnetism affects everything from auroras to power grids.

Over the past 180 years, Earth’s magnetic field strength has decreased by about 10 per cent.

However, a mysterious area in the South Atlantic has emerged, where the geomagnetic field strength is decreasing even more rapidly.

The area is called the South Atlantic Anomaly and has seen satellites malfunctioning over it several times due to exposure to highly charged particles from the sun.

This has led to speculation that Earth is heading towards a magnetic pole flip.

In their new study, the team set out to test whether this is actually the case, by studying evidence stretching back 9,000 years.

Objects including clay pots act as ‘time capsules’ and carry valuable information about the magnetic field in the past, according to the team.

Using sensitive instruments, the researchers were able to recreate the direction and strength of Earth’s magnetic field at specific places and times. 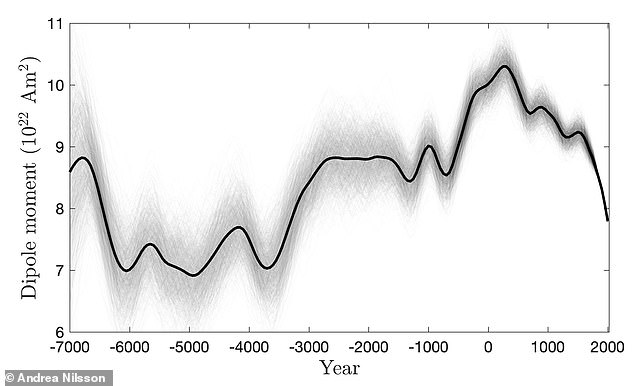 Using sensitive instruments, the researchers were able to recreate the direction and strength of Earth’s magnetic field at specific places and times. This graph shows the variations in the geomagnetic dipole field strength over the past 9,000 years

‘We have developed a new modelling technique that connects these indirect observations from different time periods and locations into one global reconstruction of the magnetic field over the past 9,000 years’, Mr Nilsson explained.

Reassuringly, the team’s model suggests that the South Atlantic Anomaly will recover of its own accord and is unlikely to trigger the reversal that some have anticipated.

‘Based on similarities with the recreated anomalies, we predict that the South Atlantic Anomaly will probably disappear within the next 300 years, and that Earth is not heading towards a polarity reversal’, Mr Nilsson said.

In the future, the team hopes the model could be used to date both archaeological and geological records, by comparing measured and modelled variations in Earth’s magnetic field.

The study comes shortly after Daniel Baker, director of the Laboratory for Atmospheric and Space Physics at the University of Colorado, Boulder, warned that if a reversal happens, it is likely to render some areas of the planet ‘uninhabitable’ by knocking out power grids.

His comments were made in an in-depth Undark report written by Alanna Mitchell, who has a new book about the topic titled ‘The Spinning Magnet: The Electromagnetic Force that Created the Modern World and Could Destroy It’.

Ms Mitchell writes: ‘The dangers: devastating streams of particles from the sun, galactic cosmic rays, and enhanced ultraviolet B rays from a radiation-damaged ozone layer, to name just a few of the invisible forces that could harm or kill living creatures.’

WHAT COULD HAPPEN TO EARTH IF ITS POLES FLIPPED?

The Earth’s magnetic field is in a permanent state of change.

Magnetic north drifts around and every few hundred thousand years the polarity flips so a compass would point south instead of north.

The strength of the magnetic field also constantly changes and currently it is showing signs of significant weakening.

Life has existed on the Earth for billions of years, during which there have been many reversals.

There is no obvious correlation between animal extinctions and those reversals. Likewise, reversal patterns do not have any correlation with human development and evolution.

It appears that some animals, such as whales and some birds use Earth’s magnetic field for migration and direction finding.

Since geomagnetic reversal takes a number of thousands of years, they could well adapt to the changing magnetic environment or develop different methods of navigation.

Radiation at ground level would increase, however, with some estimates suggesting that overall exposure to cosmic radiation would double causing more deaths from cancer. ‘But only slightly,’ said Professor Richard Holme.

‘And much less than lying on the beach in Florida for a day. So if it happened, the protection method would probably be to wear a big floppy hat.’

The movement of the Earth’s magnetic poles are shown in this animation at 10-year intervals from 1970 to 2020. The red and blue lines sjpw the difference between magnetic north and true north depending on where you are standing. On the green line, a compass would point to true north. Credit: NOAA National Centers for Environmental Information

Electric grid collapse from severe solar storms is a major risk. As the magnetic field continues to weaken, scientists are highlighting the importance off-the grid energy systems using renewable energy sources to protect the Earth against a black out.

‘The very highly charged particles can have a deleterious effect on the satellites and astronauts,’ added Dr Mona Kessel, a Magnetosphere discipline scientist at Nasa.

In one area, there is evidence that a flip is already occurring. ‘The increasing strength of the South Atlantic anomaly, an area of weak field over Brazil, is already a problem,’ said Professor Richard Holme.

The Earth’s climate could also change. A recent Danish study has found that the earth’s weather has been significantly affected by the planet’s magnetic field.

They claimed that fluctuations in the number of cosmic rays hitting the atmosphere directly alter the amount of cloud covering the planet.

Henrik Svensmark, a weather scientist at the Danish National Space Centre who led the team behind the research, believes that the planet is experiencing a natural period of low cloud cover due to fewer cosmic rays entering the atmosphere.