Since being discovered 15 years ago, mysterious fast radio bursts have been one of the hottest topics in astronomy.

These sudden and intense pulses of radio-frequency electromagnetic radiation – detected by telescopes around the world – are used to probe the space between galaxies, but little is actually known about them.

Some seem to be one-off events, hinting that a catastrophic explosion such as an extreme supernova might be to blame.

But less than 5 per cent of the hundreds spotted have been seen to repeat, occasionally on a regular pattern.

Now a new repeating fast radio burst has been detected in the outskirts of a metal-poor dwarf galaxy nearly 3 billion light-years from Earth – and this one is younger and even ‘weirder’ than the first to ever be identified.

Researchers say the discovery may have implications for the way in which fast radio bursts are used to study the universe.

Since being discovered 15 years ago, mysterious fast radio bursts have been one of the hottest topics in astronomy. Now a new repeating fast radio burst has been detected in a metal-poor dwarf galaxy – and this one is younger and even ‘weirder’ than the first to ever be identified An international team led by Dr LI Di, from the National Astronomical Observatories of the Chinese Academy of Sciences (NAOC), spotted the active repeating fast radio burst, known as FRB 190520B.

It has been confirmed as being associated with a compact persistent radio source, making it only the second such counterpart to be identified, after the discovery of the first repeater FRB 121102A.

But the new repeating fast radio burst has never stopped since its discovery, the researchers said, so is the only one discovered so far to be so persistently active.

They said that FRB190520B seems to reside in a complex plasma environment with characteristics resembling those of a super luminous supernova, thus suggesting it may be a ‘newborn’.

The experts said the behaviour of the new repeating fast radio burst was similar to FRB 121102A but more extreme.

They added that the discovery hints at an evolutionary picture of fast radio bursts. 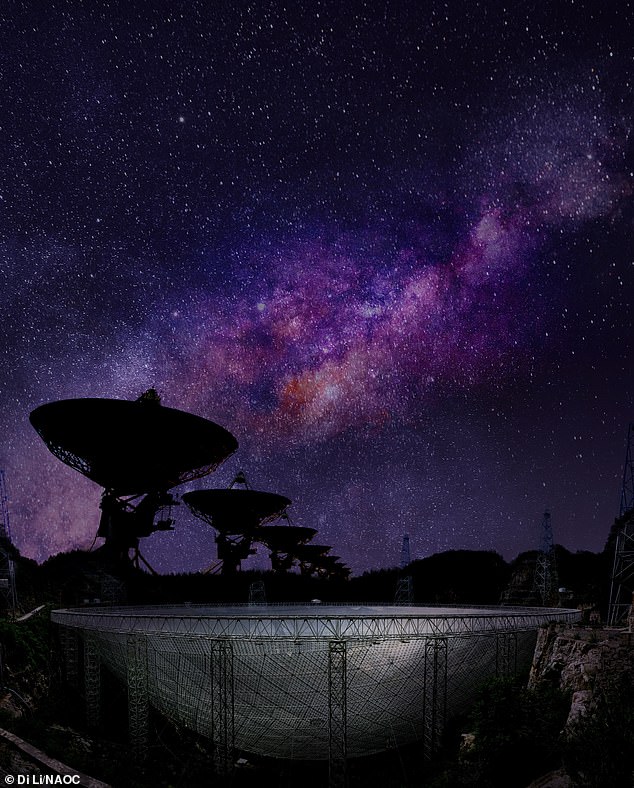 The new and strange repeater was discovered by the Commensal Radio Astronomy FAST Survey (CRAFTS), which is led by Dr Li and is one of five legacy programs of the Five-hundred-meter Aperture Spherical radio Telescope (FAST) observatory (pictured)

‘We further postulate that FRB 121102A and FRB 190520B represent the initial stage of an evolving FRB (fast radio burst) population. A coherent picture of the origin and evolution of FRBs is likely to emerge in just a few years,’ said Dr LI.

The new and strange repeater was discovered by the Commensal Radio Astronomy FAST Survey (CRAFTS), which is led by Dr Li and is one of five legacy programs of the Five-hundred-meter Aperture Spherical radio Telescope (FAST) observatory.

Fast radio bursts – described as ‘brief and mysterious beacons’ – have been spotted in various and distant parts of the universe, as well as in our own galaxy.

Their origins are unknown, and their appearance is unpredictable.

As radio waves travel across space, any interstellar gas or plasma along the way can distort or disperse the wave’s properties and trajectory.

The degree to which a radio wave is dispersed can give clues to how much gas it has passed through, and possibly how much distance it has travelled from its source.

Most of the bursts flare just once and are then never seen again – making them impossible to predict, according to astronomers.

Some show repeat activity, but until recently that was found to be completely random.

The presence of a regular sequence in the burst activity could imply that the powerful bursts are linked to large-scale cosmic phenomenon.

These could include the orbital motion of a massive star, a neutron star in a binary system or a black hole.

The new discovery has been published in the journal Nature.

Fast radio bursts, or FRBs, are radio emissions that appear temporarily and randomly, making them not only hard to find, but also hard to study.

The mystery stems from the fact it is not known what could produce such a short and sharp burst.

This has led some to speculate they could be anything from stars colliding to artificially created messages.

Scientists searching for fast radio bursts (FRBs) that some believe may be signals sent from aliens may be happening every second. The blue points in this artist’s impression of the filamentary structure of galaxies are signals from FRBs

The first FRB was spotted, or rather ‘heard’ by radio telescopes, back in 2001 but wasn’t discovered until 2007 when scientists were analysing archival data.

But it was so temporary and seemingly random that it took years for astronomers to agree it wasn’t a glitch in one of the telescope’s instruments.

Researchers from the Harvard-Smithsonian Center for Astrophysics point out that FRBs can be used to study the structure and evolution of the universe whether or not their origin is fully understood.

A large population of faraway FRBs could act as probes of material across gigantic distances.

This intervening material blurs the signal from the cosmic microwave background (CMB), the left over radiation from the Big Bang.

A careful study of this intervening material should give an improved understanding of basic cosmic constituents, such as the relative amounts of ordinary matter, dark matter and dark energy, which affect how rapidly the universe is expanding.

FRBs can also be used to trace what broke down the ‘fog’ of hydrogen atoms that pervaded the early universe into free electrons and protons, when temperatures cooled down after the Big Bang.