You’re taking the p***! Scientists develop the ultimate URINAL with a narrow opening that prevents ANY splash-back

Splash-back from the urinal is a problem that plagues many men, but it could soon be a thing of the past thanks to the work of some intrepid engineers.

A team from the University of Waterloo has designed a ‘splash-free urinal’ that promises zero urine splash-back, regardless of where the user aims.

The urinal is designed with a special narrow opening and a curved inner surface that prevents droplets from flying out of it.

It was debuted at the American Physical Society’s Annual Meeting of the Division of Fluid Dynamics yesterday.

In the abstract for their presentation, the team wrote: ‘Our new urinal designs will keep bathrooms cleaner and reduce the labor, water, and chemicals required for periodic cleaning to promote more sustainable bathroom maintenance.’

Scientists have designed a ‘splashless’ urinal that minimises mess from users of all heights (second from right). They also performed tests on a conventional urinal (second from left), one inspired by Marcel Duchamp’s ‘Fontaine’ sculpture (far left), and two other experimental designs (centre and far right) 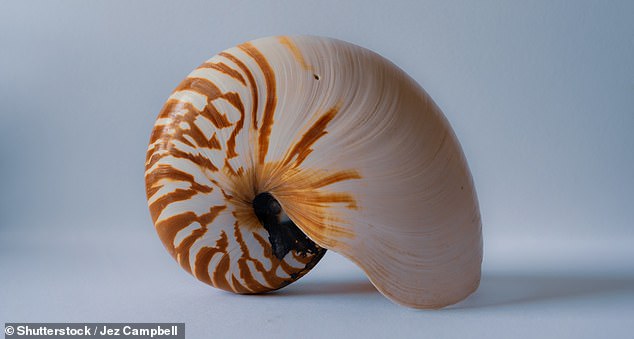 The splashless urinal has a deep, long shape, and a surface geometry inspired by the smooth, swooping curve of of the nautilus shell (pictured)

HOW DOES THE ‘SPLASHLESS’ URINAL WORK?

Through a series of tests, the researchers discovered that the angle of urination that results in the least splash back is about 30°.

They then designed a new urinal that ensures a urine stream approaching at any flow rate and from any direction hits the surface close to this angle.

The urinal has a deep, long shape, and a surface geometry inspired by the nautilus shell, or the smooth spiral of a snail shell.

This problem of splash-back has ‘persisted since the invention of the urinal over a century ago’, according to the scientists.

To create their anti-splash version, they first set out to discover at what angle a stream of urine produces the least splash-back when hitting a surface, according to New Scientist.

To do this, they modelled how a dog pees against a tree, as the animals instinctively know to raise their hind legs to get close to this ‘critical angle’.

They also performed experiments with a set of test urinals, firing a jet of coloured fluids at different speeds and heights to see which created the most mess.

These included a conventional urinal, one inspired by the sculpture ‘Fontaine’ by Marcel Duchamp, and two of their own design.

After each experiment, the team wiped up any splattered mess with a paper towel, and weighed it to determine how much liquid was picked up.

Combining this data with the urinating dog model, it was determined that the critical angle that resulted in the least splash was about 30°.

‘Thus, a surface designed to always intersect the urine stream equal to or smaller than the critical angle prevents splash back,’ they wrote. 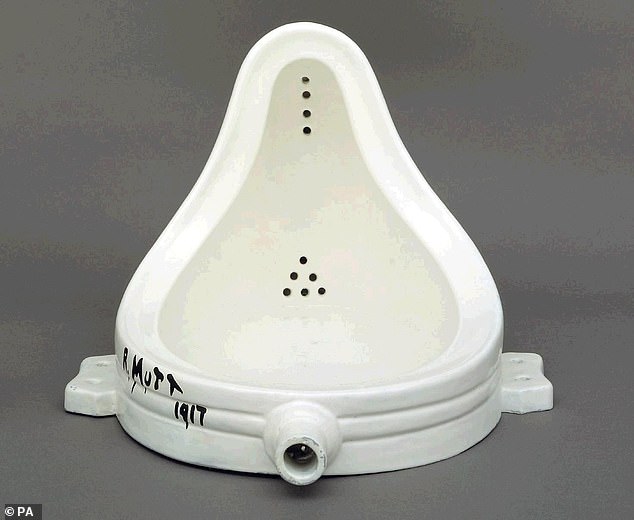 The researchers performed tests on different urinal types, including one inspired by the sculpture ‘Fontaine’ by Marcel Duchamp (pictured) 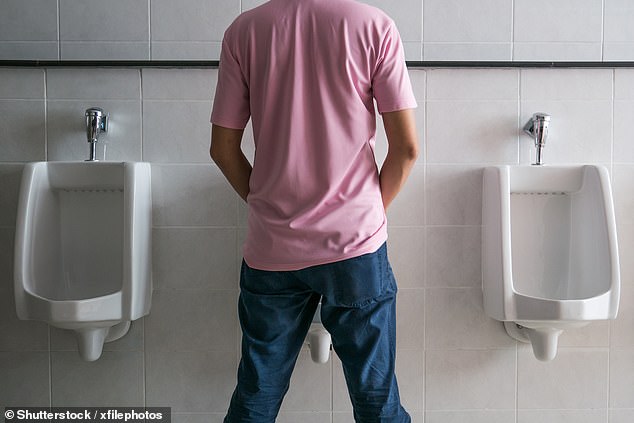 This problem of splash mess has ‘persisted since the invention of the urinal over a century ago’, according to the scientists (stock image)

Based on the findings, the team designed a new urinal that ensures that a urine stream approaching at any flow rate and from any direction will hit its surface close to this angle.

Their design has a deep, long shape, and a surface geometry inspired by the smooth, swooping curve of of the nautilus shell.

The researchers tried the paper towel test with their new urinal, and it resulted in 50 times less splash-back than with a conventional one.

They claim their design also works better than standard urinals in unstable settings, like in ships and airplane cabins.

Unfortunately, it remains unclear whether or not the team plans to patent their design, or how much it might cost.

Droplets containing urine and faeces from a flushing toilet stay in the air for up to 20 seconds, study finds

Tiny droplets which can harbour small pieces of urine, faeces, vomit and viruses float into the air at mouth-level after a toilet is flushed, a new study has warned.

It shows that tens of thousands of particles are spewed into the air by a flush and can rise several feet above the ground.

Droplets were spotted floating around five feet (1.5m) in the air for more than 20 seconds, with researchers pointing out this poses a risk of inhalation.

Small droplets and aerosols are so light they can float around in the air on tiny draughts, before settling on a surface.

Researchers say that they can also act as vectors for diseases, and could be sucked in by a passer-by, and infect them