EXPRESS INFORMER > Science & Technology > Scientists create living human skin for robots that can stretch, repel water and even ‘heal’ itself

Science fiction has just taken one step closer to reality, as scientists have managed to create a living ‘sweaty’ skin for humanoid robots.

The material, developed by scientists at the University of Tokyo, not only has a skin-like texture but can also repel water and ‘heal’ itself with a collagen plaster.

The method for its creation was published today in journal Matter, and involves dipping a robot finger into a solution of collagen and human dermal fibroblasts – the two main components that make up the connective tissue in human skin.

‘Since the finger is driven by an electric motor, it is also interesting to hear the clicking sounds of the motor in harmony with a finger that looks just like a real one.

‘I think living skin is the ultimate solution to give robots the look and touch of living creatures since it is exactly the same material that covers animal bodies.’

Scientists have managed to create a living ‘sweaty’, water-repellent skin for humanoid robots 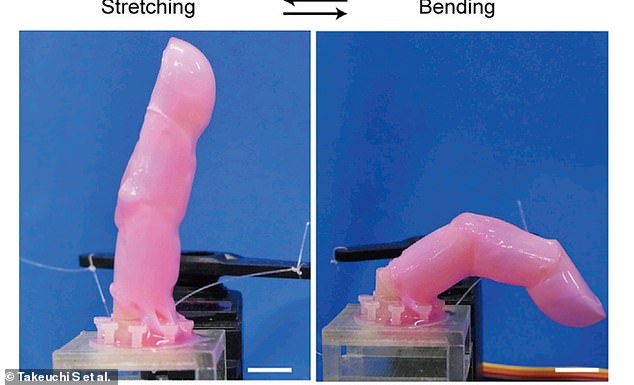 After the wound was sufficiently healed, the skin’s ability to bend and stretch was retested 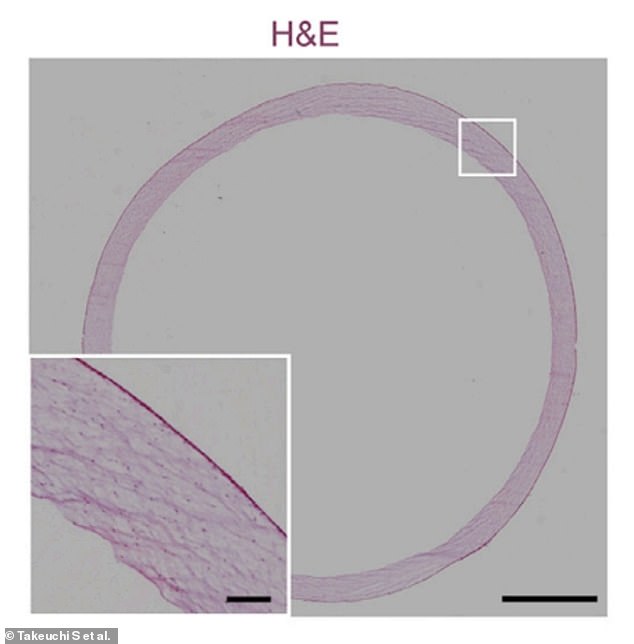 Staining of frozen sections of the artificial skin tissue. Cell nuclei were stained violet, and the extracellular matrix and cytoplasm were stained pink. It shows that an epidermal layer seamlessly covered the surface of the dermis equivalent and formed a uniform layer

HOW IS THE SKIN MADE?

The collagen contributes to the skin’s elasticity and strength, while the fibroblast cells play an essential role in hair development and wound healing

The mixture enables the artificial skin to naturally shrink snugly around the hardware, providing a uniform foundation for the next layer

The team then coat the skin in human epidermal keratinocytes, which make up 90 per cent of the outermost layer of human skin

They provide a skin-like texture and moisture-retaining barrier properties

When developing biohybrid robotics, looking as ‘human’ as possible is a top priority.

This is because many robots are intended to interact with people in the healthcare and service industries, who feel more at ease if they appear lifelike.

It can improve communication between person and robot, and even evoke likeability, according to the researchers.

Current artificial skins are made from silicone, which can mimic human appearance, but falls short when it comes to replicating delicate textures like wrinkles.

Silicone is also unable to take on skin-specific functions like sweating or repairing itself, and cannot easily be fitted to dynamic objects with uneven surfaces.

‘With that method, you have to have the hands of a skilled artisan who can cut and tailor the skin sheets,’ Takeuchi added.

‘To efficiently cover surfaces with skin cells, we established a tissue moulding method to directly mould skin tissue around the robot, which resulted in a seamless skin coverage on a robotic finger.’

To craft the skin, the team first submerged a robotic finger in a solution of collagen and human dermal fibroblasts.

The collagen contributes to the skin’s elasticity and strength, while the fibroblast cells play an essential role in hair development and wound healing.

The mixture enables the artificial skin to naturally shrink snugly around the hardware, providing a uniform foundation for the next layer.

Takeuchi and his team then coated the skin in human epidermal keratinocytes, which make up 90 per cent of the outermost layer of human skin.

They provide a skin-like texture and moisture-retaining barrier properties.

The scientists and engineers found that the skin had enough strength and elasticity to remain intact as the robotic finger was curled, bent and stretched.

The outermost layer was thick enough to be lifted with tweezers, and any wounds would self-heal when covered with a collagen bandage.

The bandage gradually morphed into the skin and withstood repeated joint movements. 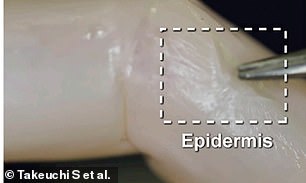 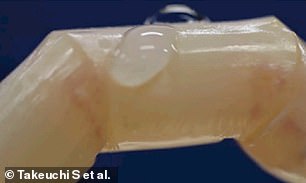 The outermost layer of the skin was thick enough to be lifted with tweezers, and is also water-repellent. This meant charged polystyrene beads would not stick to it through moisture 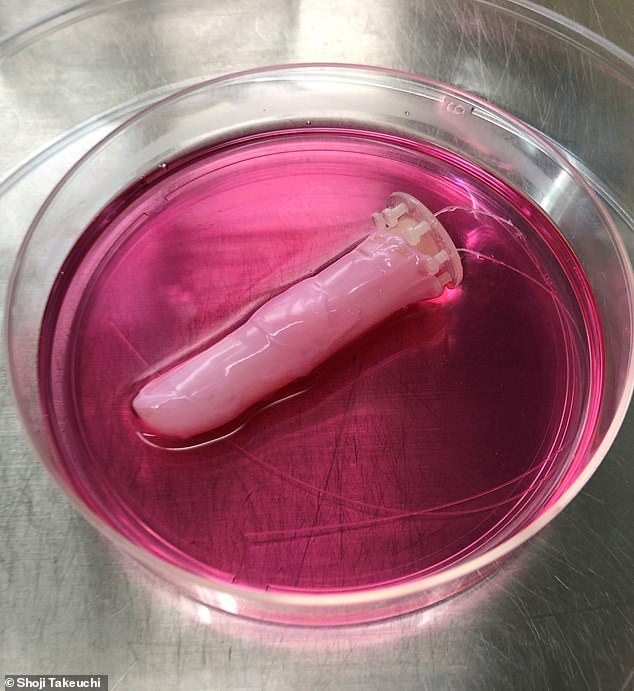 Scientists tested the skin’s self-healing functionality by punching a ‘wound’ into it after it was placed on a robotic finger, and then coating it with a collagen sheet (pictured) 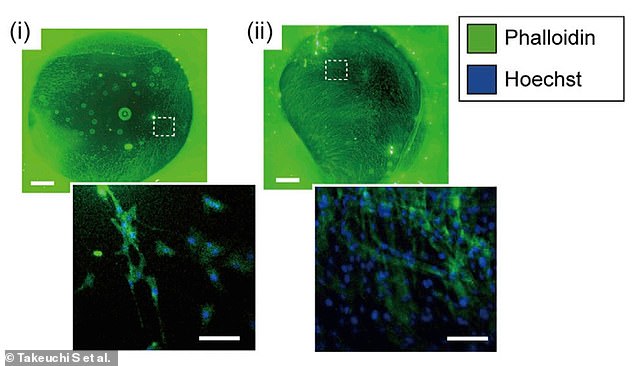 Images showing skin fibroblast cell migration into a grafted collagen sheet placed on the artificial skin to repair a wound. (i) Three days after sheet was applied (ii) Seven days after the sheet was applied. It resembled the phenomena observed at wounded sites on human skin

The finger skin also repelled water, meaning statically-charged polystyrene packing beads would not stick to it through moisture, if working in a packaging environment.

Takeuchi said: ‘We are surprised by how well the skin tissue conforms to the robot’s surface.

‘But this work is just the first step toward creating robots covered with living skin.’

Further development is still needed to increase the artificial skin’s strength, and enable it to survive longer periods without nutrient supply and waste removal.

The team will also be looking to incorporate more sophisticated functional structures within the skin, such as sensory neurons, hair follicles, nails, and sweat glands.

It uses a new type of processing system based on ‘synaptic transistors, which mimics the brain’s neural pathways in order to learn’ to feel pain

Researchers printed a grid of 168 synaptic transistors made from zinc-oxide nanowires directly onto the surface of a flexible plastic surface.

The sensor registers a change in its electrical resistance when it is touched, with a light touch corresponding to a small change and a harder touch creating a larger change 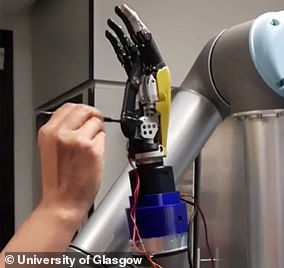 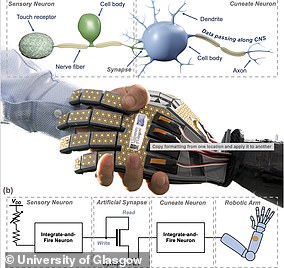