A new study on neutrinos, a mysterious subatomic particle thought to have been present during the Big Bang, suggests they played a critical role in solidifying matter’s prevalence over antimatter.

According to the study, published in the journal Nature, a discrepancy in the creation of muon neutrinos over their antineutrino counterparts may shed light on why the universe permeated with matter instead of antimatter – a mystery known as the the baryon asymmetry.

Specifically, the baryon asymmetry focuses on how matter came to be prevail over antimatter despite the fact that when the two collide, both are eliminated.

In theory, this mutual annihilation should mean neither matter nor antimatter should have survived the Big Bang.

Super-Kamiokande (pictured) is a neutrino observatory located under Mount Ikeno near the city of Hida, Gifu Prefecture, Japan. It is located 1,000 m underground in the Mozumi Mine in Hida’s Kamioka area. 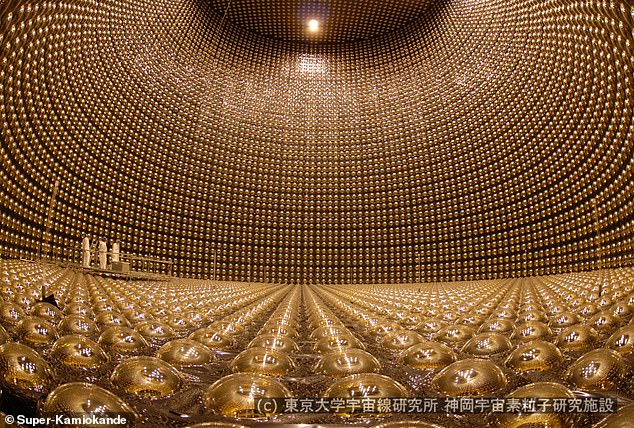 To understand the mystery behind this asymmetry, scientists have turned to the T2K experiment – a collaboration between 500 international scientists that employs, among other things, a proton accelerator in Japan that fires neutrino beams into what’s known as the Super-Kamiokande.

Here scientists can gauge a phenomenon known as oscillation – when a neutrino changes its ‘flavor’ spontaneously into one of three different types of neutrino.

Specifically, the test was designed to ascertain the rate at which muon neutrinos shift their form, called oscillation, and form into electron neutrinos or electron antineutrinos.

As noted by Science, after a decade of firing trillions of muon neutrinos at the target, scientists tallied 90 electron neutrinos and 15 electron antineutrinos.

Scientists say their results aren’t completely definitive, but are significant enough to challenge principals of physics like charge parity (CP) which dictates that physics should look the same whether you substitute particles for antiparticles – a principle that would forecast the same amount of matter and antimatter in the universe. 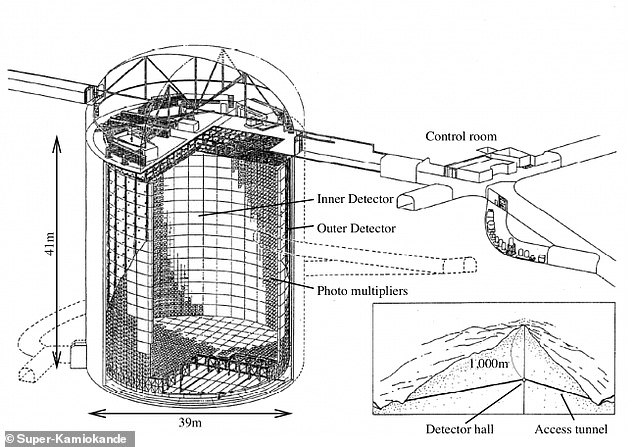 Pictured is the design of the T2k experiment, specifically the Super-Kamiokande – a container in which scientists study neutrino oscillations.

As noted by Science, the study rules out the possibility that there was no CP violation in the early creation of matter at a 95 percent confidence level which is less than the 99.7 percent threshold needed to claim ‘strong evidence.’

According to Science, rival experiments like called NuMI Off-Axis ν which is located in Minnesota, have come up with conflicting results, ruling there was almost no CP violation, though tests scheduled for later this decade could help resolve those discrepancies.

WHAT IS A ‘STERILE’ NEUTRINO?

The sterile neutrino is a hypothetical fourth type of neutrino.

So far, there are three known types of neutrinos, known as ‘favours’.

These are muon, electron, and tau.

A fourth type would have mass – different from the others – and interact with gravity.

Studies have suggested it can be ‘caught’ by observing its influence on the other types of neutrinos.

Most recently, researchers working on the MiniBooNE (Mini Booster Neutrino Experiment) in Chicago believe they observed neutrinos oscillating into sterile neutrinos, and then back to particles in the detectable realm.

If discovered, the sterile neutrino could help to explain the mysterious origins of dark matter, and even resolve issue of the universe’s matter and antimatter imbalance.