Fears are mounting that monkeypox is spreading under the radar in Massachusetts, after the state spotted two cases yesterday that were not immediately linked to its first infection from about a month ago.

He said it was ‘extremely appropriate’ for people in the state to be ‘vigilant’ of the virus and ensure they knew the warning signs.

Massachusetts health officials spotted the cases yesterday in adult men from the Boston area who had recent contact with each other. It is not clear whether they had traveled abroad, or had contact with another known case.

At least 51 cases have been spotted in the U.S. to date, mostly among gay or bisexual men with links to international travel.

But a growing number are being spotted in people who are close contacts of these patients, the Centers for Disease Control and Prevention (CDC) has revealed, and at least two are in people with no links to travel or another known case.

It comes after Oklahoma became the sixteenth state to report a case of the virus this week in an individual who had recently returned from a country that was ‘experiencing an outbreak’ of monkeypox.

A total of 16 states and Washington D.C. have now reported cases of monkeypox. The tags above show the areas that have registered cases of the virus over the last week 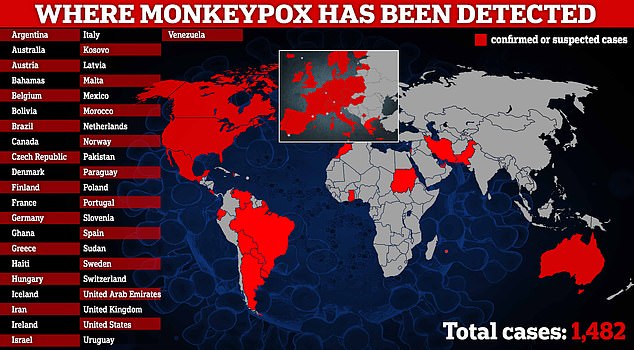 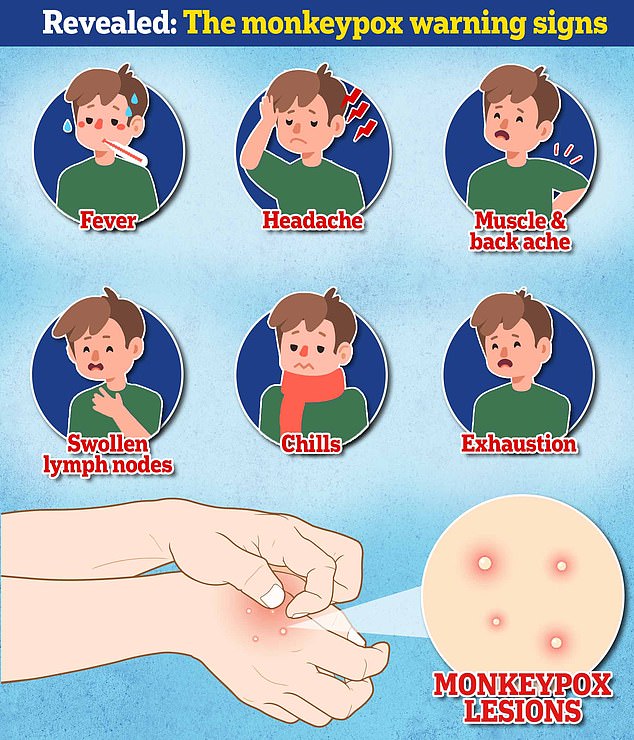 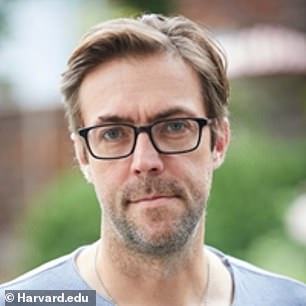 A group of scientists are calling for the name of the monkeypox virus to be changed arguing it is ‘discriminatory against Africa’.

The tropical disease got its name after it was spotted among monkeys imported into Denmark in 1958 who suffered lesions on their skin similar to those from smallpox.

But in a position paper published on Friday, more than two dozen scientists called for the name of the virus which is native to West Africa to be abandoned.

They wrote: ‘In the context of the current outbreak, continued reference to, and nomenclature of this virus being African is not only inaccurate but is also discriminatory and stigmatizing.’

They drew parallels with the Covid outbreak, where naming variants after countries was abandoned in favour of letters of the Greek alphabet.

Hanage told DailyMail.com: ‘These cases certainly indicate undetected transmission chains, although at this stage we can’t say whether they are linked to the previous case in Massachusetts or are a separate introduction.’

He added: ‘I noticed that [Health officials in the state] have urged “vigilance”. I think it is extremely appropriate.

‘People should be aware of symptoms — fever, swollen lymph nodes and rash — but also remember that the rash might not look like the photos in the papers which tend to be of people suffering from a different strain of the virus, with an estensive disseminated rash.

‘In some cases, there may be only one pustule.’

Health officials in Massachusetts say neither patient reports a ‘known link’ to the first spotted in the state a month ago.

In Rhode Island, health officials say their first case — a man in his 30s reported last week — is ‘believed to be related to travel to Massachusetts’.

It was unclear whether this man was linked to the two most recent cases in the state, its first case, or a separate group that is yet to be detected.

The CDC said last week they were yet to record ‘urban transmission’ unlike in Europe where several countries have more than 100 cases.

They have also brushed off concerns about infections not linked to travel or other known cases, saying they are likely linked to travelers who just haven’t been detected yet.

Announcing the case, Dr Brown said: ‘It is very important to be aware of the symptoms of monkeypox and to be vigilant.

‘Individuals with concerning rashes should contact their health providers.’

She added: ‘Although monkeypox infections remain rare, and none of the close contacts from Massachusetts’ first case developed monkeypox during their monitoring period, the CDC is reporting that cases continue to rise across the United States.’

The Bay state was the first state to spot the disease in a hospitalized gay or bisexual man from Boston on May 18 who had recently returned from Canada. Since then, it has been detected in 15 other states and Washington D.C.

One expert has already suggested there could be more than 300 cases in the U.S., but many are going undetected as some patients suffer a mild illness and because of a lack of testing.

Medical literature says monkeypox infections typically begin with a fever and flu-like signs within 21 days before a rash appears on the face and spreads to the rest of the body.

But in the current outbreak many patients are experiencing a rash and skin lesions in genital areas and on the anus before any flu-like symptoms. In some cases, these are also not spreading to other areas of the body.

Officials are urging gay and bisexual men to be aware of new lesions, rashes or scabs and get in contact with a sexual health clinic 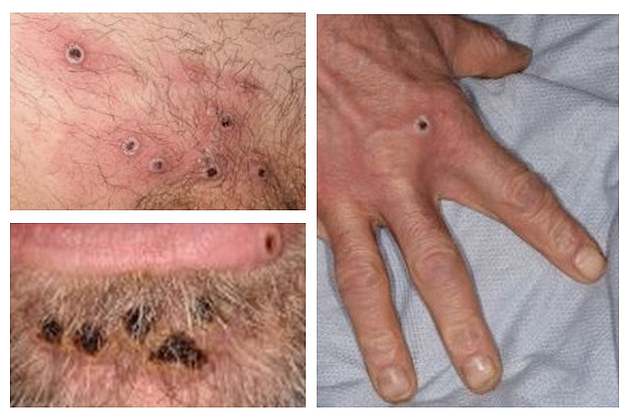 The tropical disease — native to West Africa — spreads primarily through direct skin-to-skin contact with infectious lesions or by touching bedding and clothing previously used by a sufferer.

The CDC says there are yet to be any cases of the virus transmitting through the air recorded in the United States.

Most cases are mild and clear up on their own within about four weeks. But around one in 100 can be fatal, estimates suggest.

Treatment includes vaccines to boost immunity against the virus in people who have recently being exposed, and various medicines typically reserved for monkeypox.

Last week the CDC took down guidance for people to wear face masks when in countries experiencing a monkeypox outbreak — just 13 hours after it was reported by the media.

At a briefing on Friday Dr Rochelle Walensky, the agency’s director, explained they now thought the virus may only spread through the air when ‘people have sustained face-to-face contact’.

‘[But] all of the cases that we have seen to date in this outbreak have been related to direct contact with patients or with materials that have touched them either through close contact or through bedsheets and what not.’

She added that monkeypox was not thought to ‘linger in the air’ in the same way as Covid, further limiting the chance of catching it through respiration.

The CDC previously said it removed the face masks sentence because it feared this was ‘causing confusion’.