Headmaster James Granville-Hamshar used a scheduled inset day to give teachers the day off at St John the Baptist School, Woking, Surrey – despite the school being shut for six months last year during lockdown.

History teacher Emily Cavell-Hill praised Mr Granville-Hamshar for his sense of ‘well-being’ by telling staff not to come to work for the inset day on Friday last week.

Mrs Cavell-Hill, 30, wrote on Twitter: ‘Today was supposed to be an inset day for all staff but given the current circumstances, our head has given everyone the day off.

‘The only tasks were to ‘sleep and relax’. This is what great well being looks like.’

But Mr Granville-Hamshar’s decision was condemned by education campaigners for further depriving students of valuable time in the classroom after last year’s closure.

Katie Ivens, vice-chair of the Campaign for Real Education, told MailOnline: ‘This is terrible. A day off is not the right way to spent an inset day when pupils will have been deprived of their education for several months. 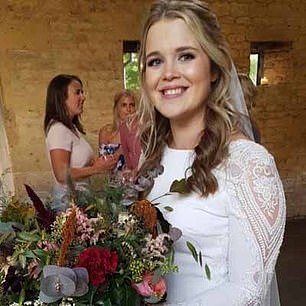 History teacher Emily Cavell, 30, (above) praised the head for his sense of ‘well-being’

Inset days, or In Service Training Days, are intended to enable staff to enhance their professional development.

Teachers are required to undertake five of them per year. Pupils do not come into school during these days.

However, teachers often see them as a chance to catch up with colleagues following weeks off work.

A Roman Catholic Academy, St John the Baptist School is a comprehensive school with 1,312 pupils, including 270 in the sixth form.

It closed its doors on 20 March 2020 as part of the government’s nationwide coronavirus lockdown.

The school began a staggered reopening on September 1, with an inset day for staff the following day. All students were back by September 3.

The school was awarded an ‘Outstanding’ classification following a Ofsted inspection in March last year. 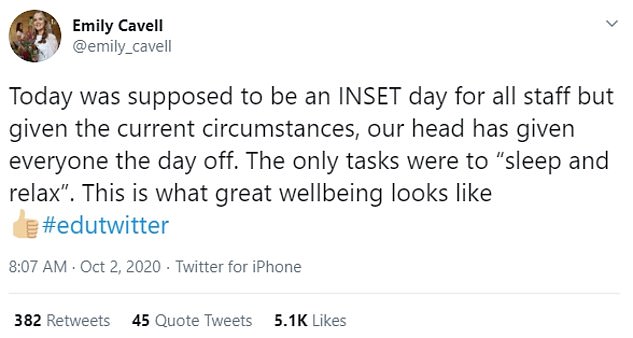 Mrs Cavell-Hill’s tweet said the only instruction for staff was to ‘sleep and relax’ at the school that has 1,312 pupils which was rated by Ofsted as outstanding during an inspection last year

Mr Granville-Hamshar declined to comment when contacted by MailOnline.

But a spokesman for the school claimed the ‘day off’ was in recognition for the ‘many additional hours’ the ‘dedicated’ and ‘magnificent’ staff carried out during the lockdown and in preparation of re-opening the school in September.

He said: ‘Since lockdown started back in March, our staff have been magnificent.

‘They worked collectively to not only to continue to provide a high calibre of education, at some points up to 200 vulnerable children and children of key workers were in school prior to the summer break, but also to support and engage with students and their families in so many other ways.

‘This is in addition to the online learning that was provided to those students who we were not permitted to come back into school.

‘The level of dedication has continued throughout the first half of this term.

‘That is why, when considering how to prepare for an inset day that had been in the diary for 12 months, we took the decision to use it as a means of supporting the well being of our staff. 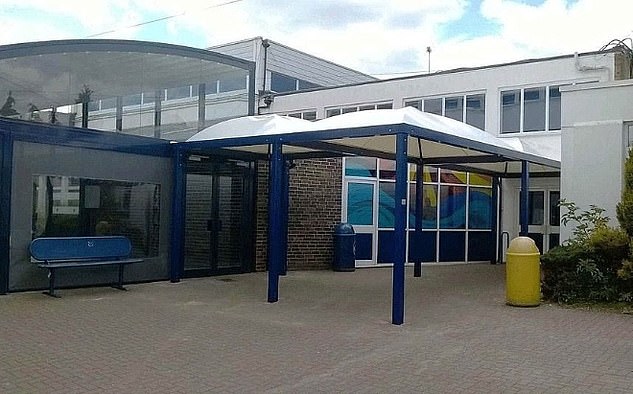 ‘This is recognition of the many hours of additional training we did at the start of the term for Covid preparation, and the supplementary work that is required as they develop ways of delivering lessons that are on and offline.

‘We also recognise that students need teachers who can give every lesson the vibrancy, thought and life that helps engage and excite them.

‘Ensuring our staff are well and healthy has a direct impact on the young people in our school.

‘The impact that this one piece of recognition has had on our staff has been tangible.’

A spokesman said: ‘It is down to headteachers to decide how to use staff time, including inset days, and they are best placed to decide what is best for their school, their students and their staff.

‘Teachers and other school staff have been working incredibly hard both during lockdown and over the last couple of months to get schools fully open with current restrictions, and school leaders will always take their welfare into account.’