She took to Instagram this week to announce her New Year’s resolutions, including a vow to ’embrace’ her body and ‘boob gap’.

But Scarlett Moffatt, 31, lived firmly in the moment as she rung the New Year in with boyfriend Scott Dobinson, 26, at London’s Proud Embankment on Friday night.

The television personality looked glamorous in an arctic-hue mini dress as she attended the Cabaret All Stars show starring Denise van Outen and Duncan James.

In style: Scarlett Moffatt, 31, looked glamorous in an arctic-hue mini dress while ringing in the New Year with boyfriend Scott Dobinson, 26, at London’s Proud Embankment on Friday

The former Gogglebox star’s garment featured a plunging V-neckline, large mirrored sequins and feathered detail, while the hem finished just above her knee.

She wore a pair of open-toed heels with sky blue straps and held a silver handbag adorned with glitter.

One-time I’m A Celebrity… Get Me Out of Here! winner Scarlett’s policeman boyfriend towered over her while standing with his hand placed on the small of her back. 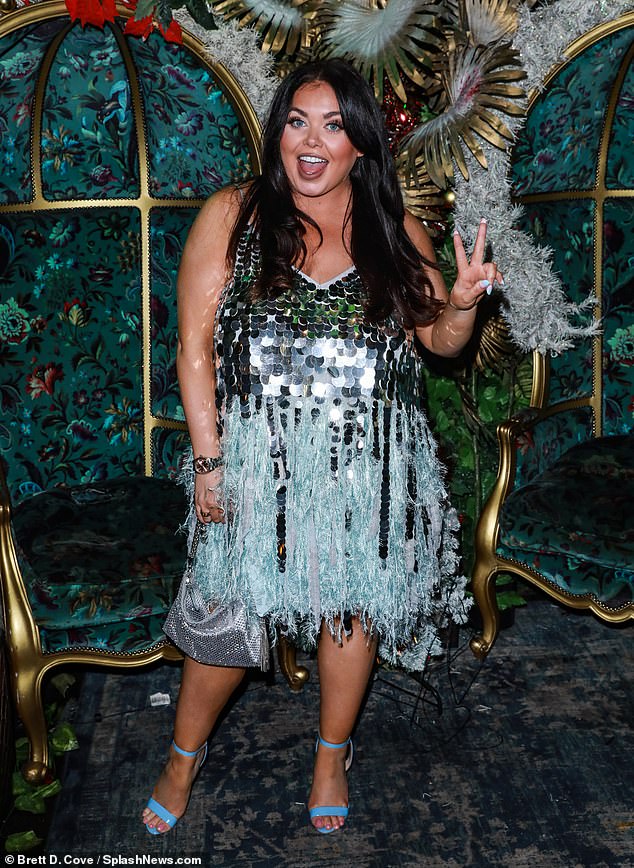 Out on the town: The star’s garment featured a plunging neckline with the hem finishing above her knee while at the Cabaret All Stars show starring Denise van Outen and Duncan James 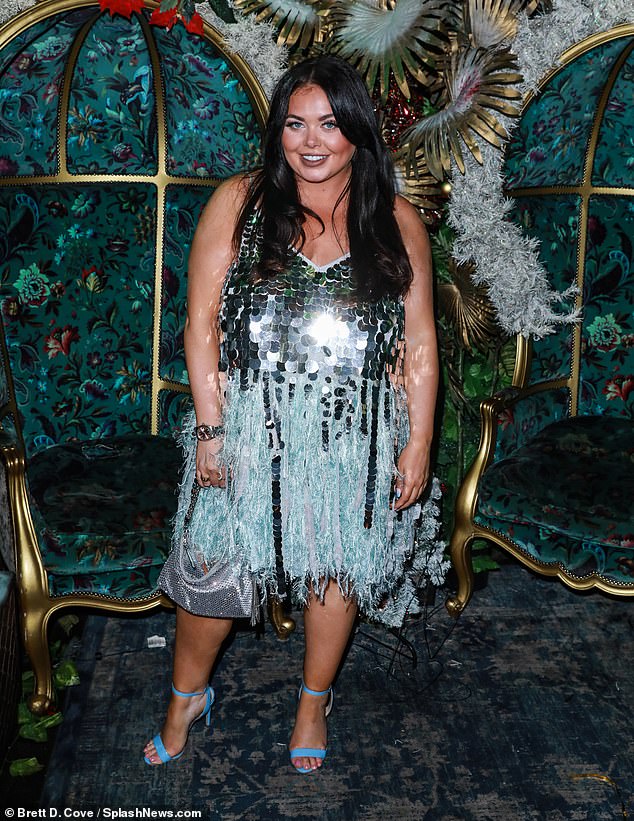 Fashion focus: She wore a pair of open-toed heels with sky blue straps and held a silver handbag adorned with glitter

He wore a black suit with a white shirt which he left open at the collar.

Television presenter Scarlett was in a cheerful mood for the final hours of 2021, cheekily giving a V-sign hand gesture as she posed at the venue.

The former ballroom dancer’s outing came after she took to her Instagram Stories on Thursday to reveal her inspiring pledges for 2022, which included starting to dance again and spending more time at home. 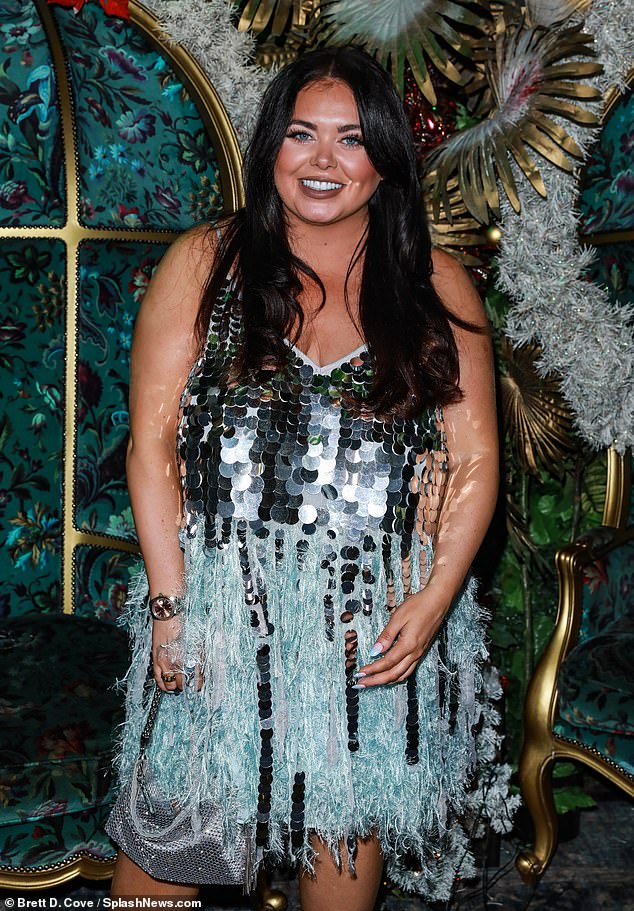 Celebrations: Scarlett cut a glamorous figure in the sparkly number as she posed for cameras

Scarlett, who often speaks about her battle with her image, also vowed to embrace her body and her ‘boob gap’ in the twelves months ahead.

Alongside a snap of herself wearing a low-cut vest top, she detailed her body-positive resolution, writing: ‘Embrace my body more. That includes my boob gap.

‘I’m also going to start dancing again as it’s something that fills my heart with joy.’ 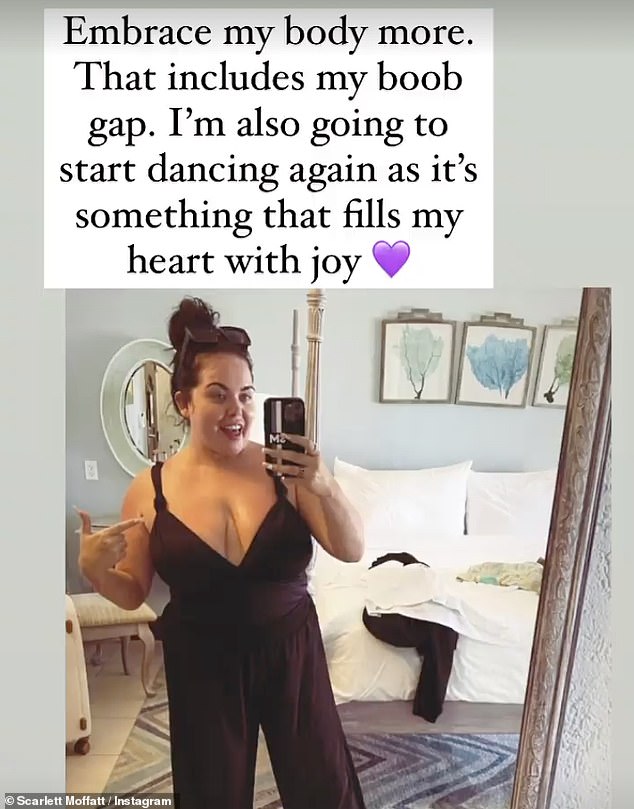 New Year’s resolutions: Scarlett took to her Instagram Stories on Thursday to reveal her inspiring pledges for 2022, which included embracing her body more 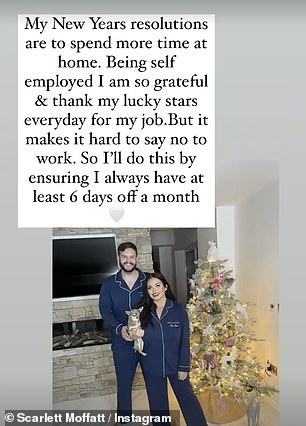 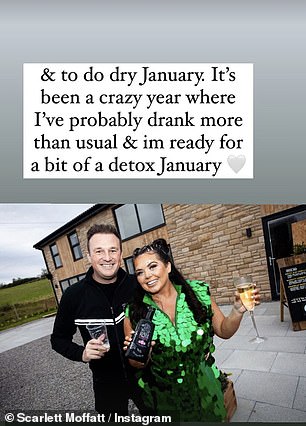 Goals: Her list of New Year’s resolutions also included spending more time at home, making sure she gives herself six days off each month

Her list of resolutions also included allowing herself more free time, making sure she gives herself six days off each month, and doing dry January.

She wrote: ‘My New Year’s resolutions are to spend more time at home. Being self employed I am so grateful and thank my lucky stars everyday for my job.

‘But it makes it hard to say no to work. So I’ll do this by ensuring I always have at least six days off a month.’ 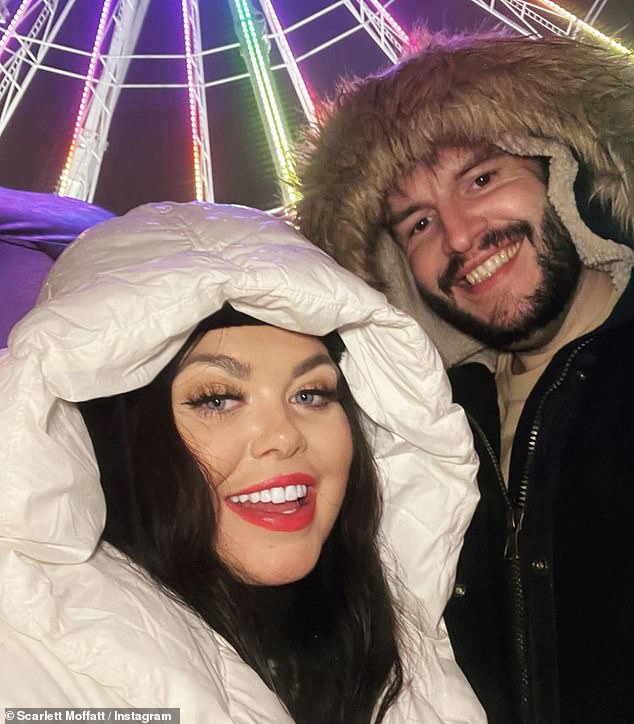 Festive: Scarlett’s boyfriend Scott came down to London to spend Christmas with her, with the star sharing some festive snaps of the couple on social media

In a follow-up post, she added: ‘And to do dry January. It’s been a crazy year where I’ve probably drank more than usual and I’m ready for a bit of a detox in January.

‘Also me and @scottdobby now we are settled are going to post more on our House account @ourbonniebarn.’

Scott came to London to spend the festive period with Scarlett, with the reality star sharing cosy pictures of the pair online.

She wrote alongside the snaps: ‘Thanks to my bestie and soulmate for coming down so we could celebrate in London together.

‘I wasn’t feeling 100% as I got the Xmas cold but the day couldn’t have been more perfect.’ 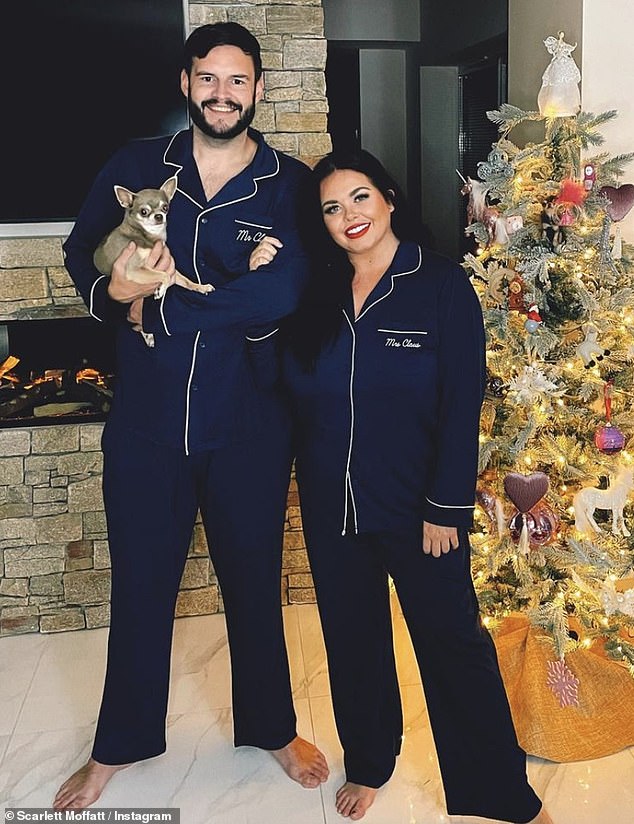 Smitten: The I’m A Celeb wrote on Instagram: ‘Thanks to my bestie and soulmate for coming down so we could celebrate in London together’