A savvy mother who had a tight budget for renovating her new home has revealed how she was able to transform her kitchen into a chic, modern space for less than £600.

Kirsty Wilson, 35, from Rochdale, was determined to turn her tired kitchen into a cool space but wanted to stick to a strict budget.

The mother-of-one, who owns her own business making children’s clothing in addition to supporting adults with learning disabilities, decided to paint the kitchen herself and sourced bargain materials such as Fablon, spray paint and art prints from The Range, B&M and eBay.

‘It all started when I joined the Facebook DIY pages and I saw that people could paint their kitchen cupboards with the paint and the results looked amazing,’ she said, speaking to money-saving community LatestDeals.co.uk.

Kirsty Wilson, 35, from Rochdale, spent less than £600 on budget buys to overhaul the appearance of her kitchen. Pictured: After 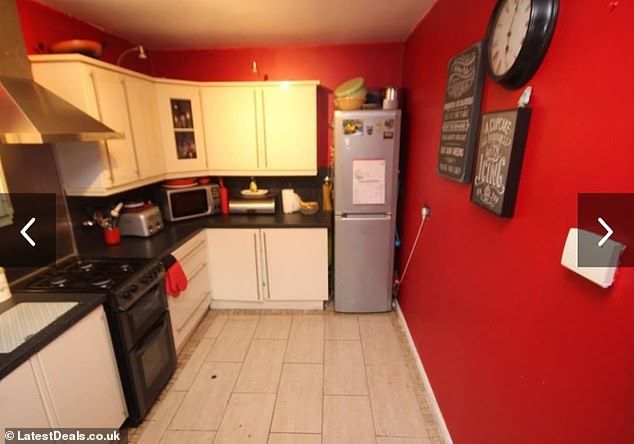 Kirsty had a ‘very tight budget’ for transforming her home after recently purchasing her first house. Pictured: The kitchen before 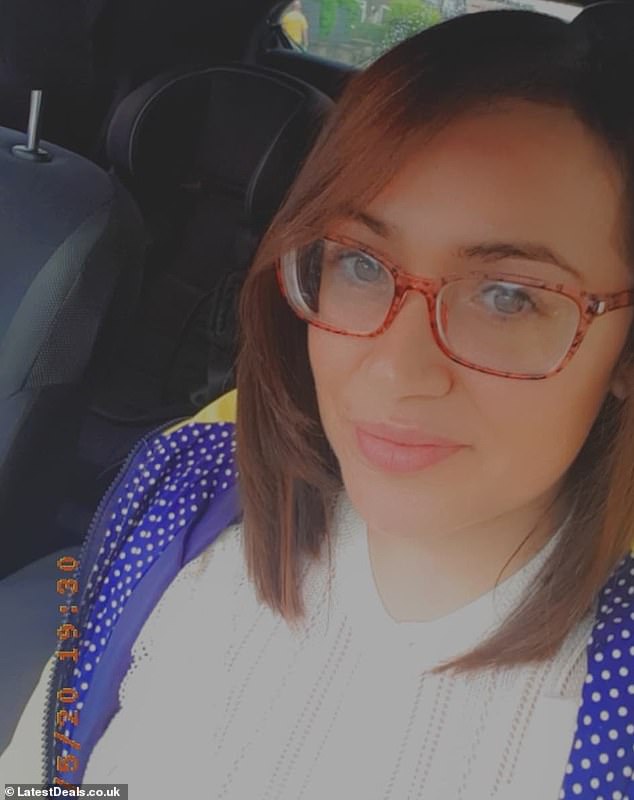 ‘As we had just bought our first house this year we were on a very tight budget and we couldn’t afford a new kitchen just yet, so I bought a tin of Lady Grey Frenchic paint.

‘I started by stripping the old plastic coating off the cupboards, then cleaned them with sugar soap and gave them a little sand down.

‘It took about five thin coats of the paint, leaving two hours between coats. Once done, I used Frenchic finishing coat to protect the paint. I then sprayed the handles with a black metal spray paint.

‘For the walls, I had to scrape all the red paint off, and this then took about five coats of white paint. It was all finished with a new light and prints on the wall. 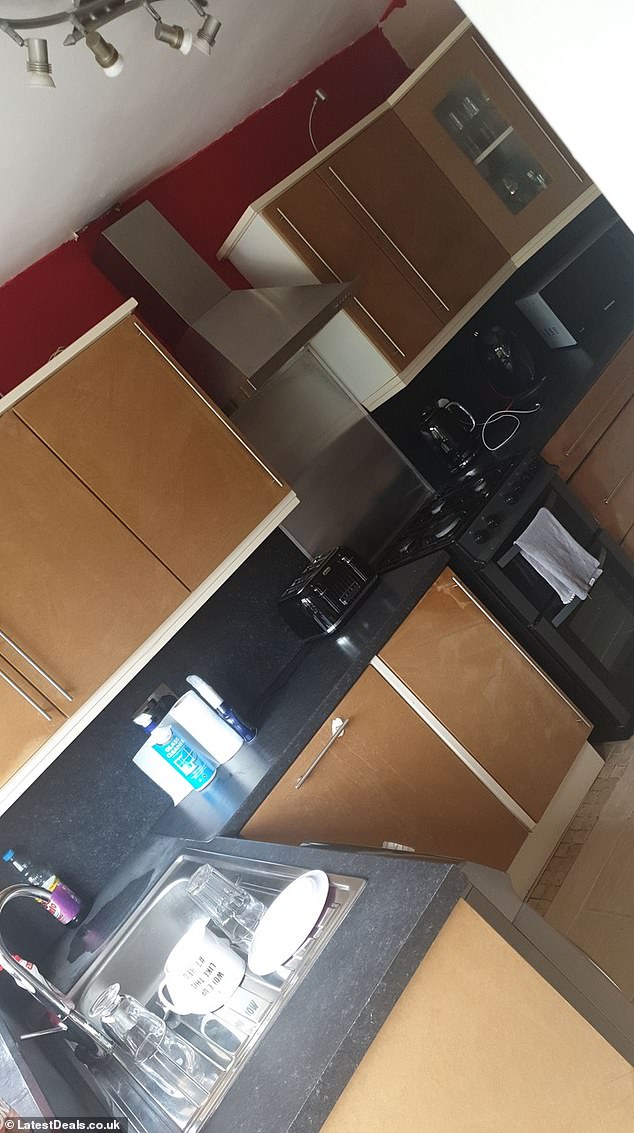 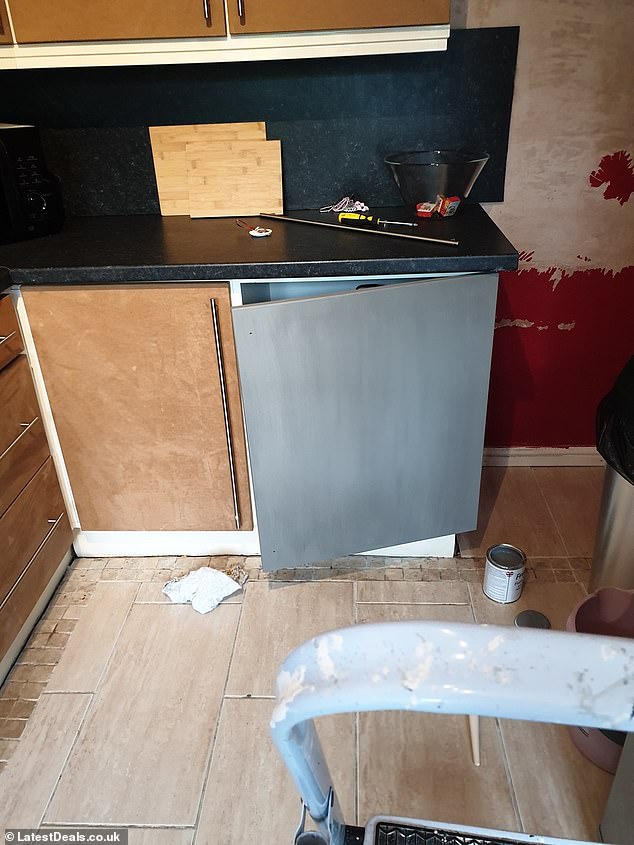 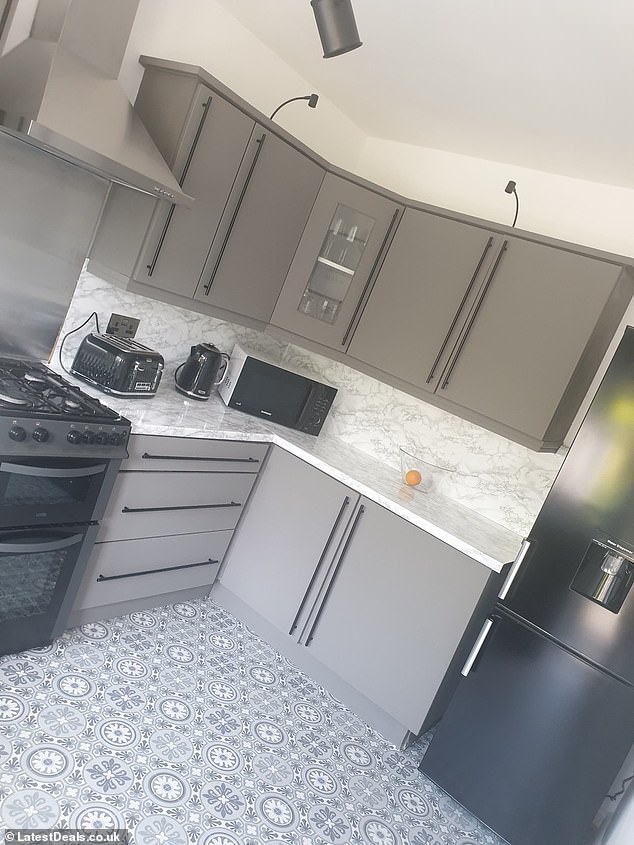 How much did Kirsty spend on renovations?

‘Overall we spent less then £600 so as you can imagine I am so pleased with the finished look – I absolutely love it!

‘The costs of the materials were £50 on Fablon from B&Q, and £200 for two workmen from a local company to fit it.

‘I also bought black spray paint for £8 from The Range, which was used to spray the cupboard handles and the lights on top of on the cupboards.

‘The flooring was from a local flooring company and cost £180 including fitting.

‘As you can imagine with just buying a house and all my savings going into the house, funds were tight so being able to do it for less then £600 was an amazing feeling as who doesn’t love doing makeovers on a budget? 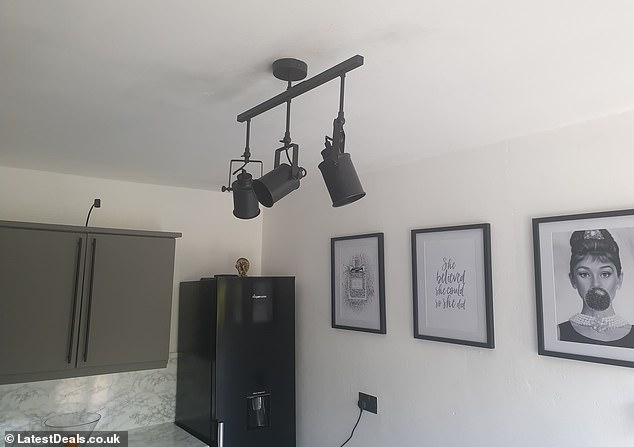 Kirsty explained their budget was ‘tight’ because they had used all of their savings to purchase the new house. Pictured: The kitchen after 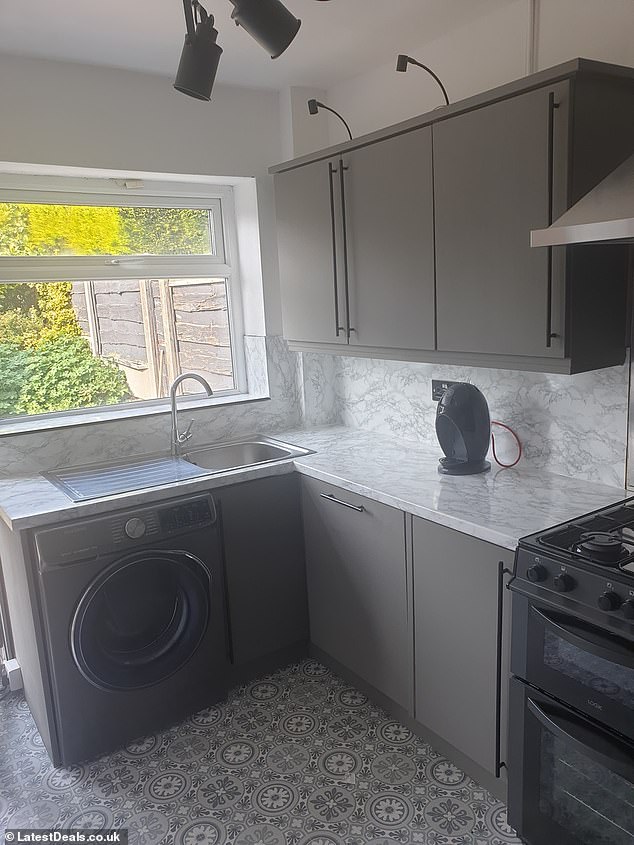 Kirsty, who estimates her kitchen would’ve cost over £5,000 new, said the project has given her a sense of achievement. Pictured: The kitchen after

‘It also gave me a sense of achievement to see the outcome on such a tight budget!’

Kirsty, who was over the moon with her bargain renovation, admits to feeling very proud of the finished look.

‘I really think this is a great idea during lockdown as it gets those jobs done that you wouldn’t normally have time to do,’ she said.

‘It also keeps you occupied which can contribute to a great and proud feeling to what you have achieved and what else you can do.

‘I’d advise anyone who wants to do the same to take your time as the painting was the longest process as I had to leave two hours between coats on the cupboards.

‘I would also advise when painting the cupboards to do very thin coats on each layer. 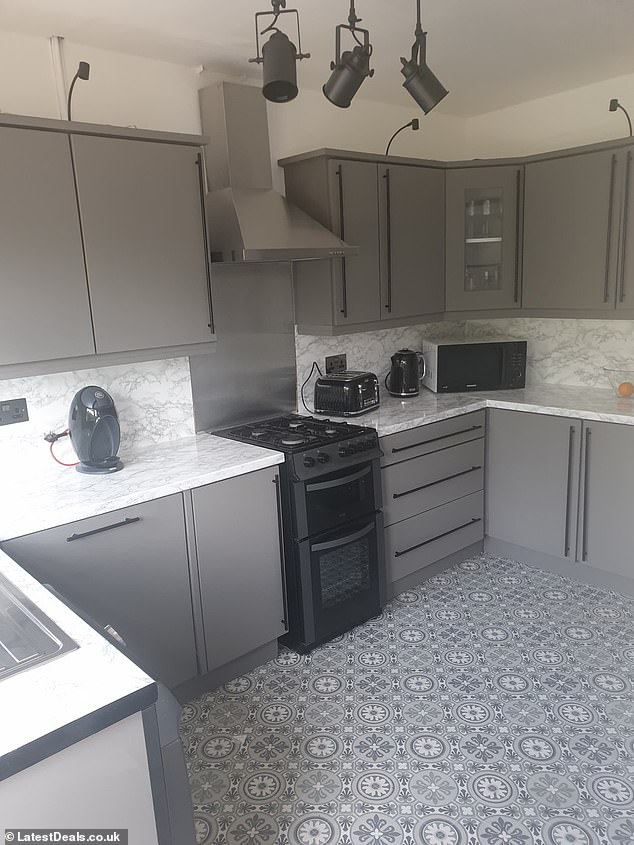 Kirsty said it’s a good idea to use lockdown to complete household jobs that you wouldn’t normally have time to do. Pictured: The kitchen after

‘I made a little collage with screenshots of the colours and design I wanted to do, which gave me some idea of what the finished look would look like.

‘I would advise others to definitely take the plunge and do it. It’s hard work but definitely worth it for the finished look.

‘I am a very busy lady managing two jobs, a toddler and renovating a house but I wouldn’t change anything as I love it!’

Tom Church who is co-founder of LatestDeals.co.uk, commented: ‘Tackling a kitchen project is an expensive and stressful task, but Kirsty has not only managed to keep costs down, but actually enjoy the process too!

‘Budget materials such as Fablon and spray paint are winners when it comes to keeping expenses down on a project, and getting stuck in and doing the painting yourself is not just great for your bank balance rather than paying a builder, but is really rewarding as well!’