Adel al-Jubeir said it is ‘definitely an option’ for the Middle-Eastern state to develop nuclear capabilities if its rival Iran could not be stopped from making one, according to reports.

He reportedly told DPA news agency that other countries would also likely do the same.

According to Al Jazeera, the foreign minister said: ‘Saudi Arabia has made it very clear, that it will do everything it can to protect its people and to protect its territories.’

Adel al-Jubeir said it is ‘definitely an option’ for the Middle-Eastern state to develop nuclear capabilities if its rival Iran could not be stopped from making one, according to reports 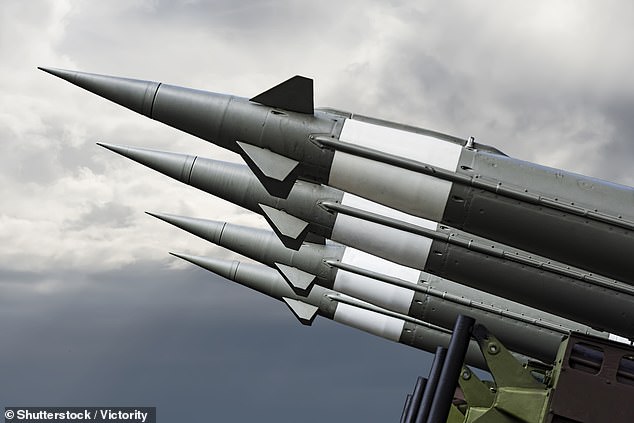 Iran warned today it would retaliate with ‘crushing’ force against the US if Donald Trump ordered a strike against the country’s nuclear facilities, after reports that he was considering it in the final weeks of his presidency.

Ali Rabiei, an Iranian government spokesman, warned that ‘any action against the Iranian nation would certainly face a crushing response’ after US officials told the New York Times that Trump had asked about ways to punish Iran for its nuclear build-up.

The Pentagon’s strike plans against Iran are thought to include missile attacks, cyber-warfare, and pre-emptive action by Israel, which has previously carried out a series of operations against Iran.

While Trump’s advisers talked him out of a military strike, he might still look at other ways to hit Iran, officials said – weeks before he is due to hand power to Joe Biden who wants to re-enter the 2015 nuclear pact that Trump abandoned two years ago.

Trump’s Oval Office meeting came a day after inspectors said Iran had increased its stockpile of nuclear material and given unconvincing explanations for uranium particles that were found at another site.

Trump’s advisers ultimately dissuaded him from launching a strike by warning that such action could trigger a wider conflict with Iran, the officials said.

A source confirmed the account of the meeting to Reuters, saying: ‘He asked for options. They gave him the scenarios and he ultimately decided not to go forward.’

Any missile strike or cyber-attack would likely have targeted Iran’s main nuclear enrichment facility, Natanz, which Tehran insists is meant for peaceful purposes.

Most of the complex is underground and it is subject to monitoring by the International Atomic Energy Agency (IAEA) under the nuclear accord.

In its latest report, the IAEA said Iran’s uranium stockpile is now 12 times larger than the limit set under the Obama-era pact which Trump abandoned in 2018.

The agency said that as of November 2 Iran had a stockpile of around 2,440kg of low-enriched uranium, up from 2,100kg on August 25.

The limit under the deal signed with Britain, France, Germany, China and Russia is just over 200kg.

However, senior advisers talked him out of the dramatic action, according to two new reports.

The meeting took place a day after international inspectors informed United Nations members that Iran had significantly increased its stockpile of nuclear material.

Trump’s advisers ultimately dissuaded him from launching a strike by warning that such action could trigger a wider conflict with Iran, the Times sources said, weeks before Trump is due to hand over power to Joe Biden.

They said any strike, either by missile or cyber, would likely have targeted Iran’s main nuclear enrichment facility, Natanz.

A separate source confirmed Times’ account of the meeting to Reuters, saying: ‘[Trump] asked for options. They gave him the scenarios and he ultimately decided not to go forward.’

The International Atomic Energy Agency, a watchdog for the UN, reported in a confidential document last Wednesday that Iran’s uranium stockpile is now 12 times larger than the limit set under the nuclear accord Trump pulled out of in 2018.

The nuclear deal signed in 2015 with the US, Germany, France, Britain, China and Russia, known as the Joint Comprehensive Plan of Action (JCPOA), allows Iran only to keep a stockpile of 202.8 kilograms (447 pounds).

The IAEA reported that Iran has also been continuing to enrich uranium to a purity of up to 4.5 percent, higher than the 3.67 percent allowed under the deal.

Natanz, also called the Pilot Fuel Enrichment Plant, is located about 200 miles south of Tehran. Most of the complex is underground and it is subject to monitoring by IAEA under the nuclear accord.

In its latest report the IAEA also said that Iran had barred its inspectors from accessing another site where there was evidence of past nuclear activity.

The officials who spoke to the Times said Trump reacted to the IAEA report by asking his aides about what options he had to respond to Iran’s nuclear expansion.

They said Pompeo and Milley outlined the risks of military escalation, and that officials left the meeting with the impression that Trump had been dissuaded from launching a missile attack.

But, they said Trump may still be looking into ways to strike Iranian assets and allies, including militias in Iraq, the Times reported.

The US accuses Iran of backing terrorists in Gaza, Syria and Iraq, including a group who attacked the US embassy in Baghdad last December. 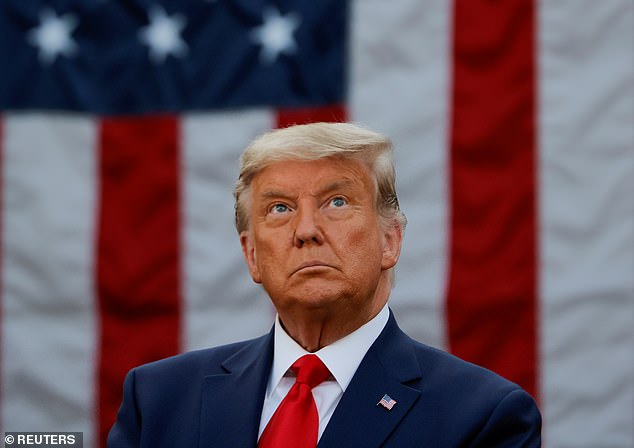 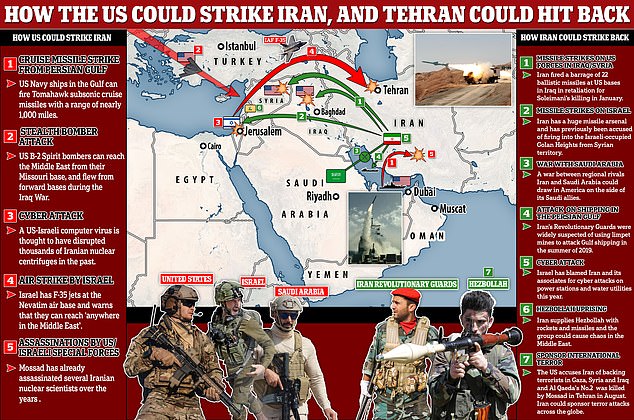 Donald Trump reportedly asked advisers for a list of options on how to take action against Iran, which could include a missile strike, a cyber-attack or an operation involving Israel. But Iran warned today that any US action would be met with a ‘crushing’ response. Tehran previously fired missiles at US bases in Iraq in retaliation for the killing of general Qassem Soleimani in January, and Iran is also suspected of being behind cyber-attacks and mysterious explosions on Persian Gulf shipping

Trump’s policy of ‘maximum pressure’ has also seen the US military carry out cyber-attacks against Iran, which in turn has been linked to cyber-attacks on power stations and utilities in Israel during 2020.

The US was also behind an Israeli operation in Iran which killed al-Qaeda’s deputy leader Abdullah Ahmad Abdullah, according to a separate NYT report last week.

Abdullah, who went by the nom-de-guerre Abu Muhammad al-Masri. was secretly shot and killed in Tehran by Israeli operatives on a motorcycle at Washington’s behest, it is claimed.

The operation is said to have taken place on August 7 on the anniversary of the 1998 US embassy bombings in Tanzania and Kenya, which were carried out by al-Qaeda.

Iran denied the report of Abdullah’s killing, claiming on Saturday that it was ‘made-up information’ and blaming US policies for the emergence of al-Qaeda.

But Washington has previously accused Iran of harboring members of the terror group behind 9/11 and allowing them to pass through its territory.

US president-elect Joe Biden has said he intends to revive the Iran nuclear accord when he takes office on January 20, but that plan could be thrown into jeopardy if tensions between the US and Iran escalate in Trump’s final weeks in the White House.