Malcom Jenkins says his Canadian Tire location in Prince Albert, Sask., sells the most Toffifee in the world — and he has the hardware to show for it.

“There’s no other store in the world, in the known universe of a charted galaxy, that sells this much Toffifee. So I said, ‘Well, that should be worth a trophy,’ ” said Jenkins. Two weeks later, he actually received a trophy in the mail from the company that manufactures the chewy Christmas treat.

“It’s a lifetime achievement award presented to Canadian Tire Prince Albert for going above and beyond in the promotion of hazelnut, caramel, nougat, cream and chocolate,” said Jenkins, proudly reading the trophy’s inscription out loud.

“I polish it like once a year,” he said with a laugh.

The store’s claim to fame also benefits local charities as they donate one dollar from every box of candy sold. This year, the funds will go to help build a new hospice in the province.

The initiative started about eight years ago, Jenkins said, when the store sold about 2,000 packages. The following year, they sold about 5,000. Sales have been growing ever since.

Last year, Jenkins’ store sold about 28,600 packages of Toffifee in a city with a population of about 40,000 people.

“It’s like Santa Claus, it comes every year. Like the swallows return to Capistrano, the Toffifee returns to Prince Albert.”

When the candy arrives, a mountain of Toffifee boxes are set up in the front of the store, ready to be disassembled by customers waiting to get their hands on the holiday sweet.

The annual Toffifee tradition isn’t just about bragging rights. One dollar from each package goes to a different charity each year.

The Rose Garden Hospice is a not for profit organization raising money to build and operate a 10-bed hospice to provide end-of-life care to people in Northern Saskatchewan.

WATCH | How affection for Toffifee confection is helping build a hospice in Saskatchewan: 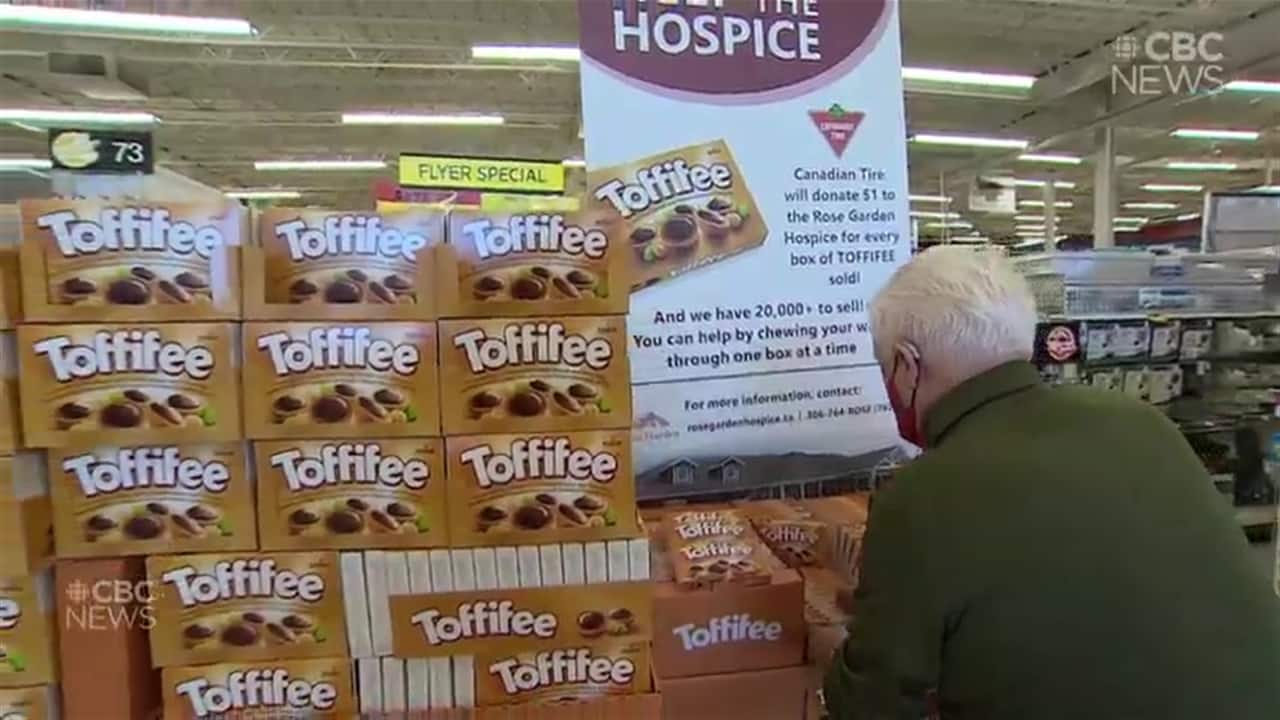 Victoria Elliott-Erickson, secretary and corporate council for the Rose Garden Hospice Association, told paNOW last week that $2.6 million — 60 per cent of the total cost of building and outfitting the facility — has now been raised.

She said the association is hoping to break ground in the spring.

Jenkins said about $4 million needs to be raised for the project and he’s happy to contribute not just financial donations, but publicity.

“We find a project and we try to help promote it,” he said. “When we’re advertising it, we talk about the project all the time, so everyone becomes aware of the charity.”

Jenkins said other fundraising efforts — like going door-to-door — have slowed because of the pandemic, but he’s hopeful the hospice will open next fall.